He said to them, “The Scriptures declare, ‘My Temple will be called a house of prayer for all nations,’ but you have turned it into a den of thieves.  -Mark 11:17 NLT

It is my belief that the “Evangelical Industrial Complex” has long ago sold their ethical inheritance for a mess of pottage. Many churches and their celebrity leaders are all about the money. A recent government giveaway program titled “Paycheck Protection Program” (PPP) has many of the celebrity charlatans rushing like hungry hogs to feed at the government trough.

The Paycheck Protection Program is an opportunity for churches (among others) to obtain free taxpayer money, thinly disguised as “loans.” These loans have an interest rate of 1%, but payments are deferred for six months. And most of these loans will be “forgiven,” meaning the recipient will not have to repay the “loan.” It sounds like all you have to do to qualify for loan forgiveness is to keep your employees on the payroll and do not cut their pay.

As you can see below, Tommy Hill, the Director of Finance for Sovereign Grace Churches, makes it obvious that they have no intention of repaying the loan.  Hill then states, “I understand that there are some who still question the wisdom of whether to receive financial aid from the government at all.”

That’s right, Tommy. There still remains a few churches in the Sovereign Grace Denomination whose leaders are ethical. Hard to believe, I know. 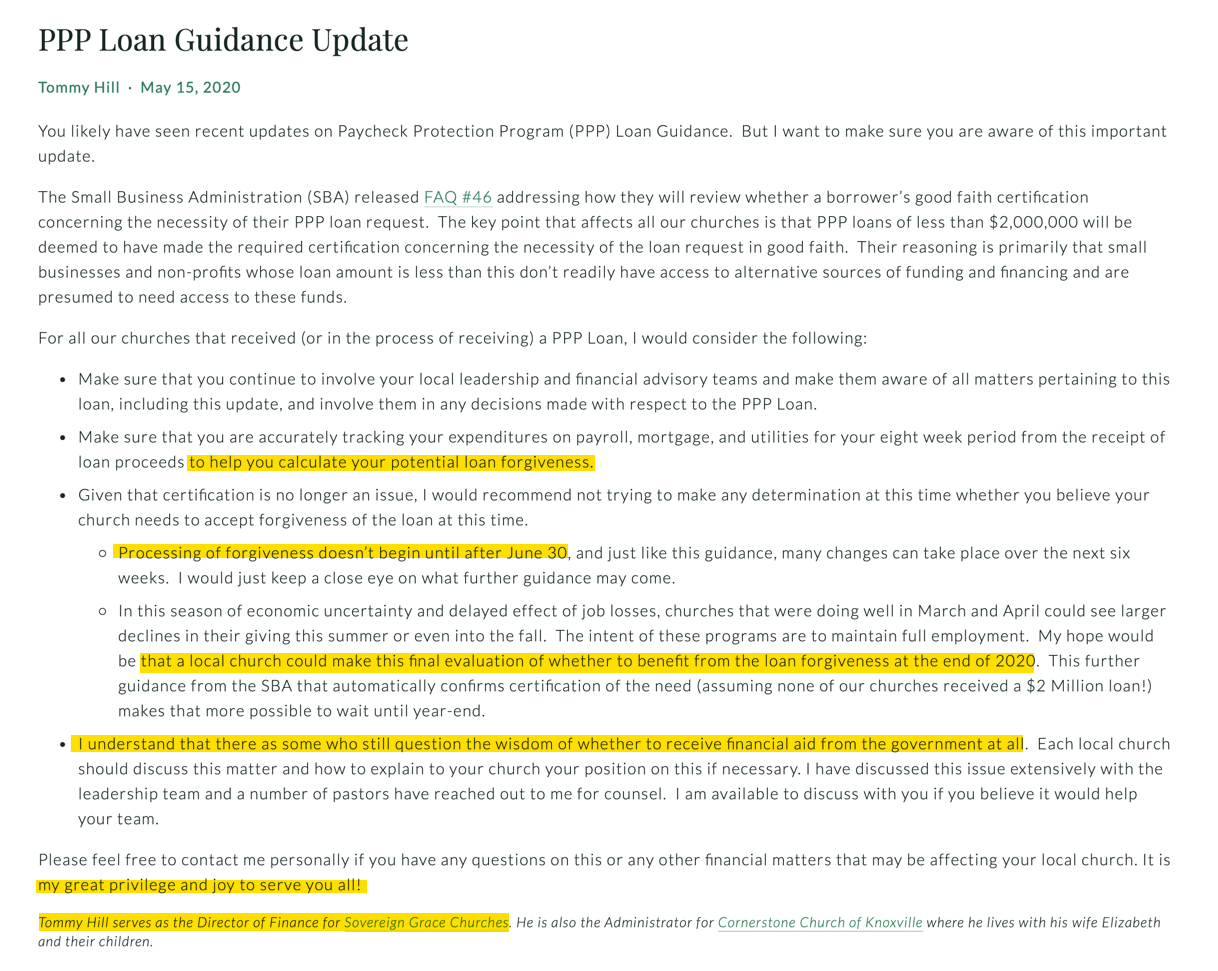 As you can see below, at least three Sovereign Grace Churches have taken taxpayers’ money.  Of course, C.J. Mahaney wallowed up to the government trough, as did Mark Prater, the man who replaced Mr. Humility as the Executive Director of the shrinking denomination. Tommy Hill’s church also got their handout. 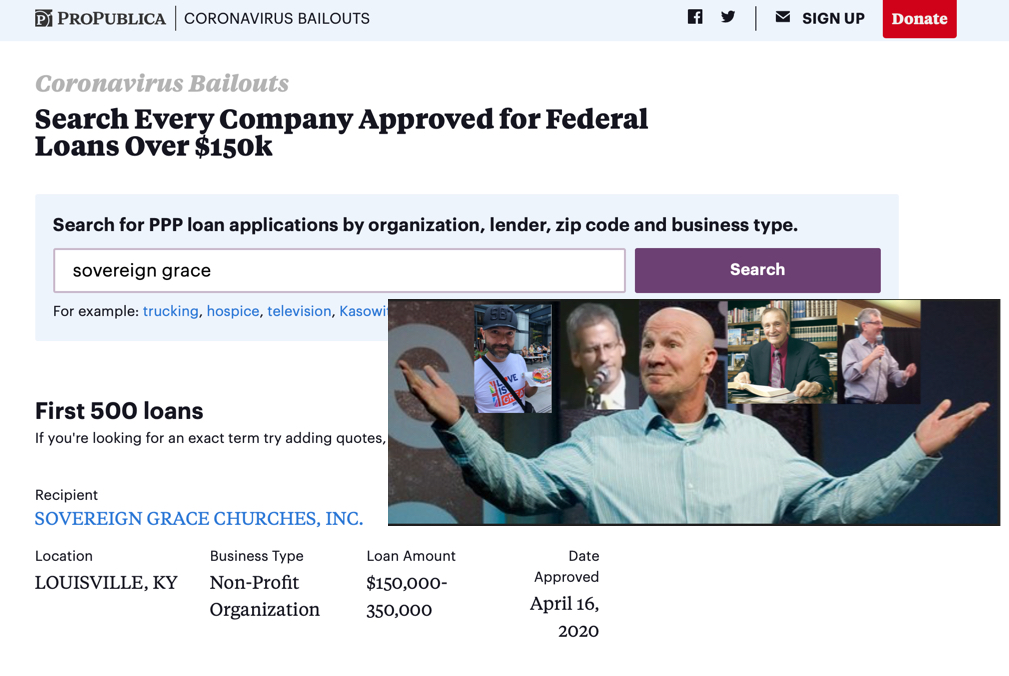 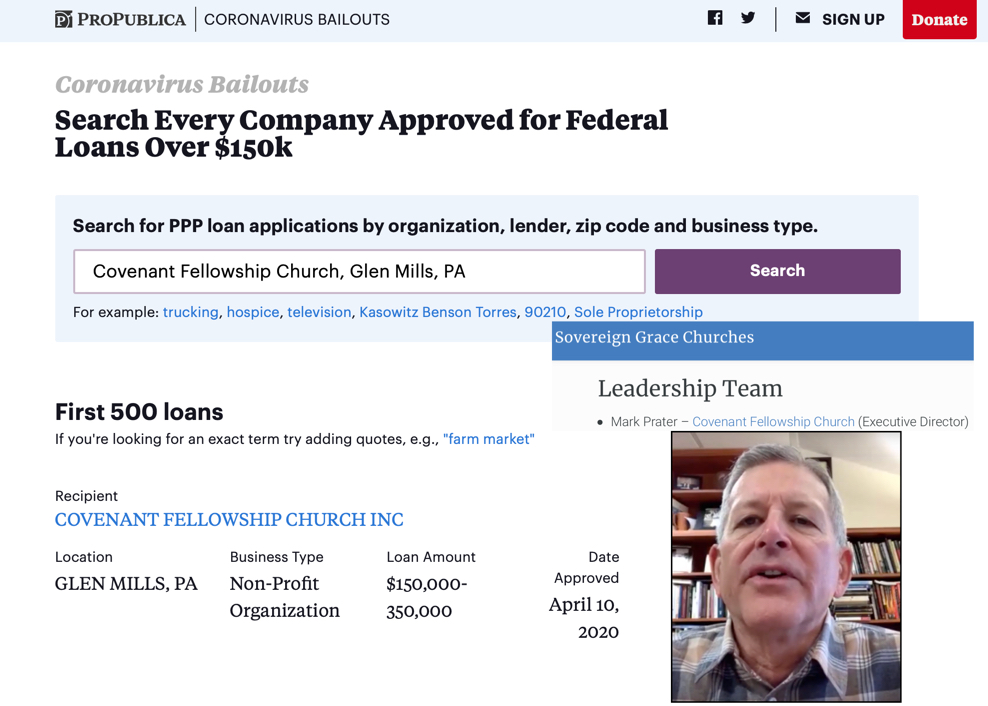 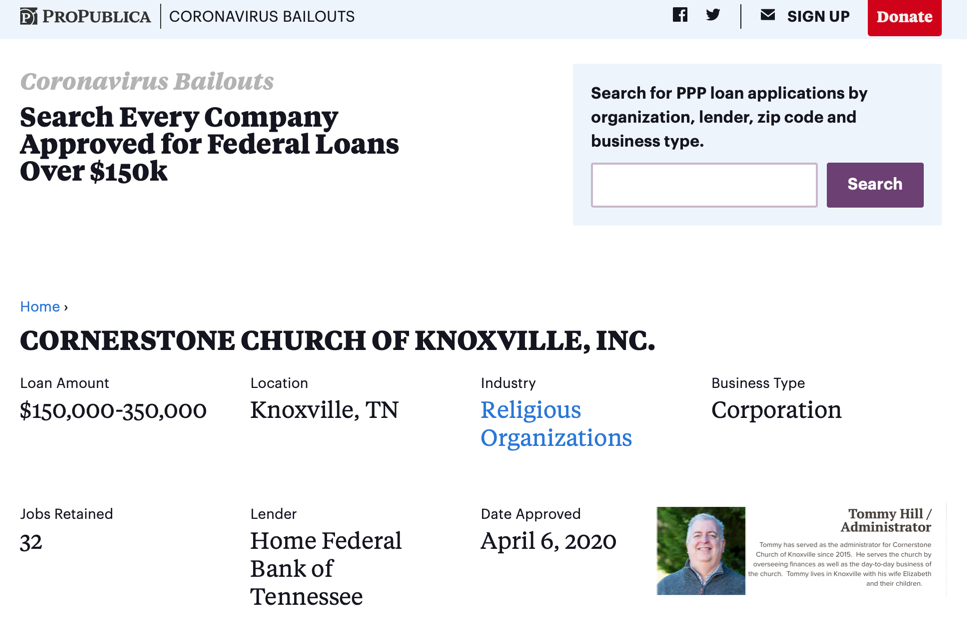 Not surprisingly, Mark Dever’s Capitol Hill Baptist Church also was happy to take taxpayer’s money. Dever totally shut down his church during the pandemic, not even holding an on-line church service. Apparently Dever could find no biblical example of the early church using on-line technology to hold a church worship service. Who knew?  I would guess donations took a hit, but the Lord works in mysterious ways, in this case using the heathen taxpayer’s money to keep the Capitol Hill coffers full. 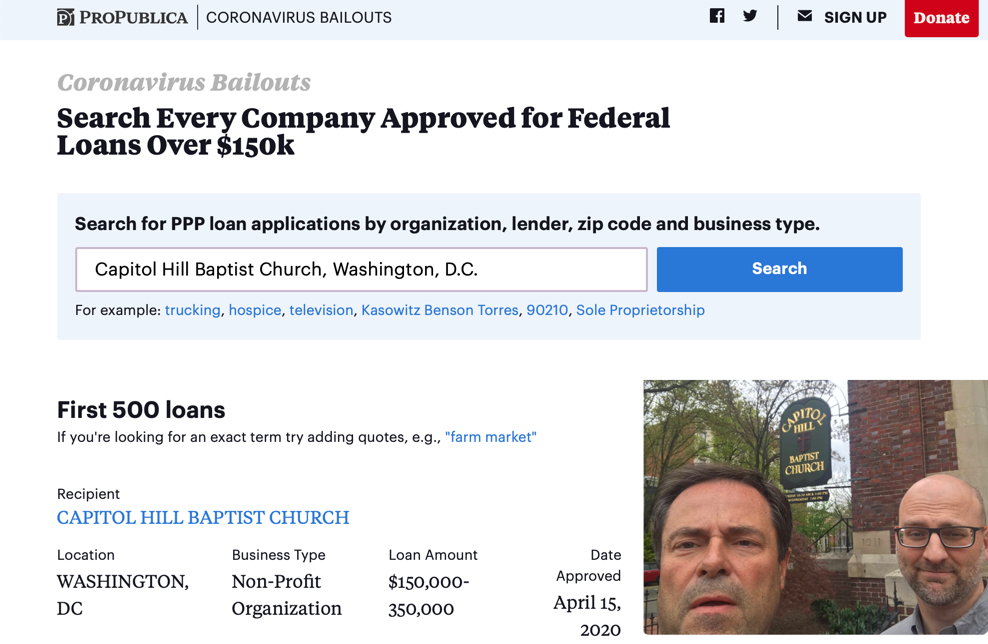 Next, we see Ligon Duncan was happy to take $1-2 million from the hard-working taxpayers. That’s some major jack. I think Ligon could probably fund the 2022 T4G conference singlehandedly with his free government money! 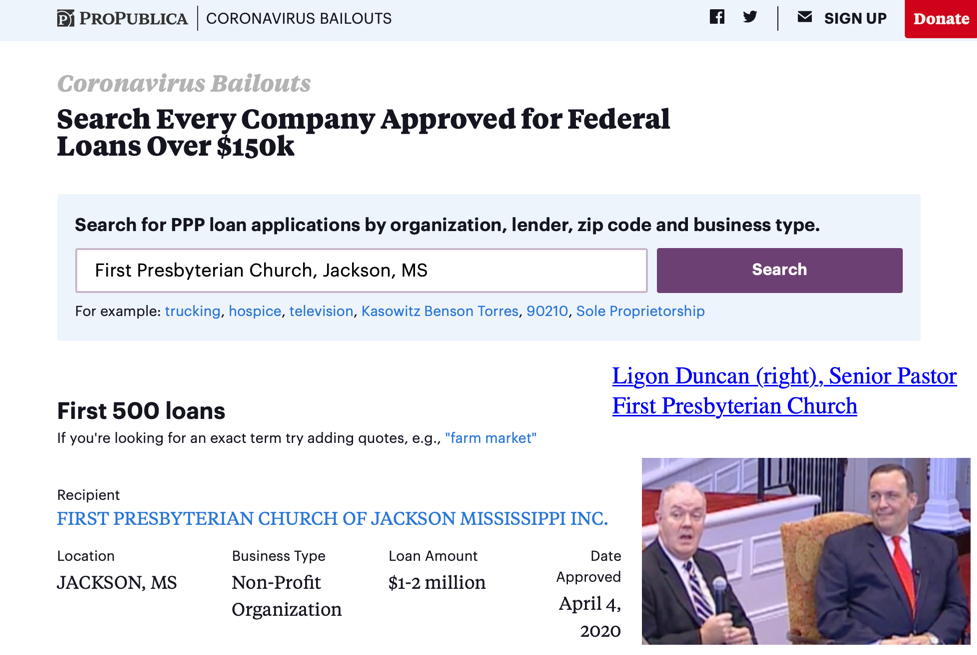 J.D. Greear, not about to be outdone by a Presbyterian, came away from the government trough with $2-5 million dollars. One would have thought that with all that money he could have paid for a more thorough investigation of the fake Dr. Loritts prior to hiring the man in June, but on the other hand, receiving a cash influx of $5 million might cause a guy not to really care what the nattering nabobs of negativism (bloggers) have to say about a hypocritical hiring. 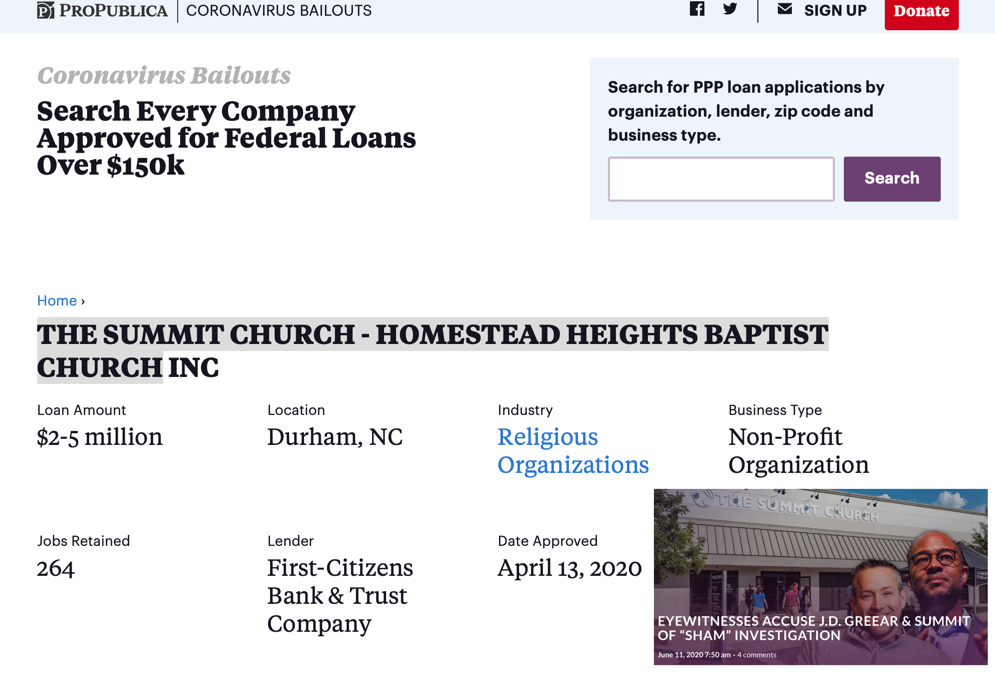 Although there are many other churches I could add to my list, I will end with pastor Ryan Fullerton of Immanuel Baptist Church in Louisville, KY. A strong supporter of C.J. Mahaney until he realized Mahaney could no longer help him in his quest to become a celebrity conference speaker, the Canadien-born pastor was happy to take up to $1 million from United States taxpayers. 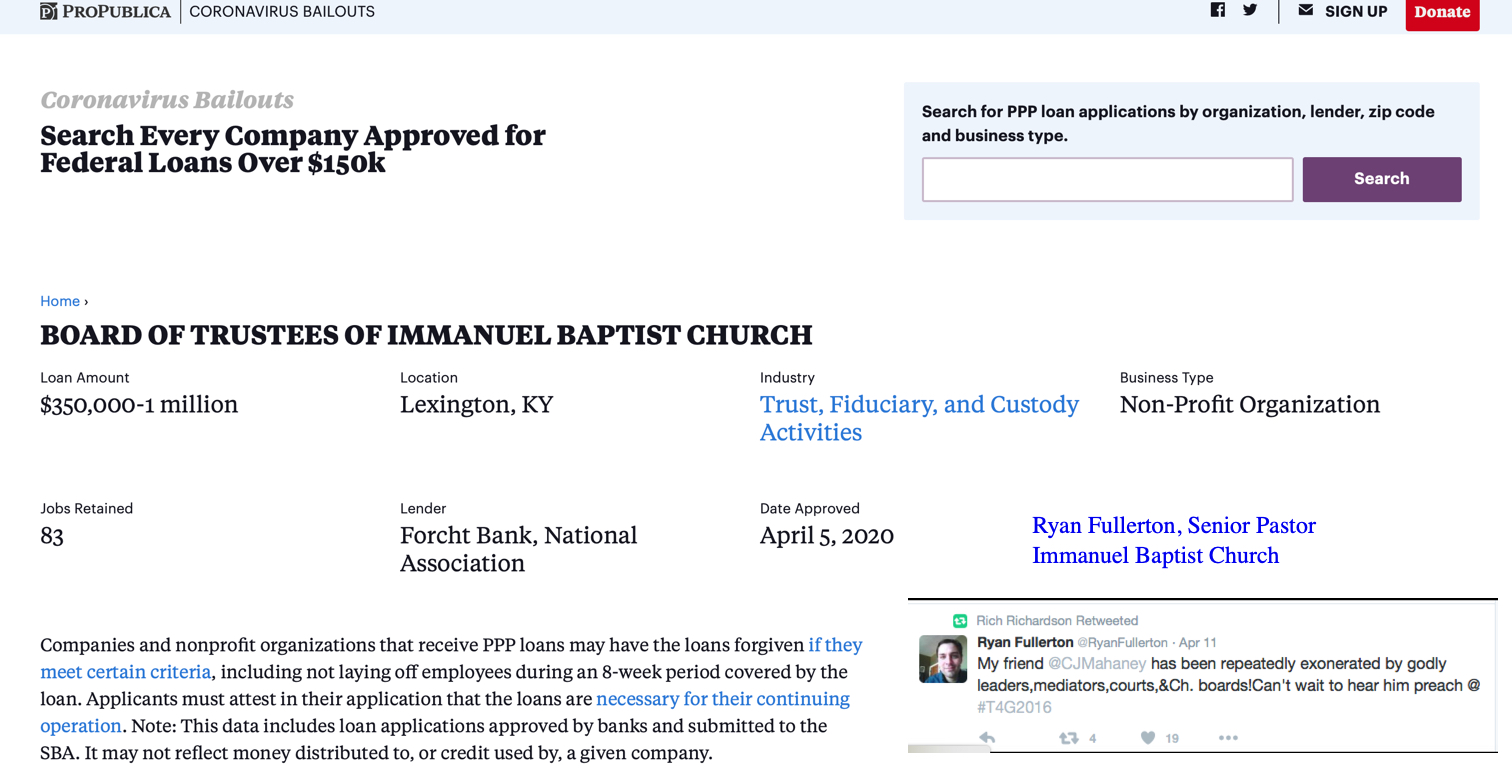