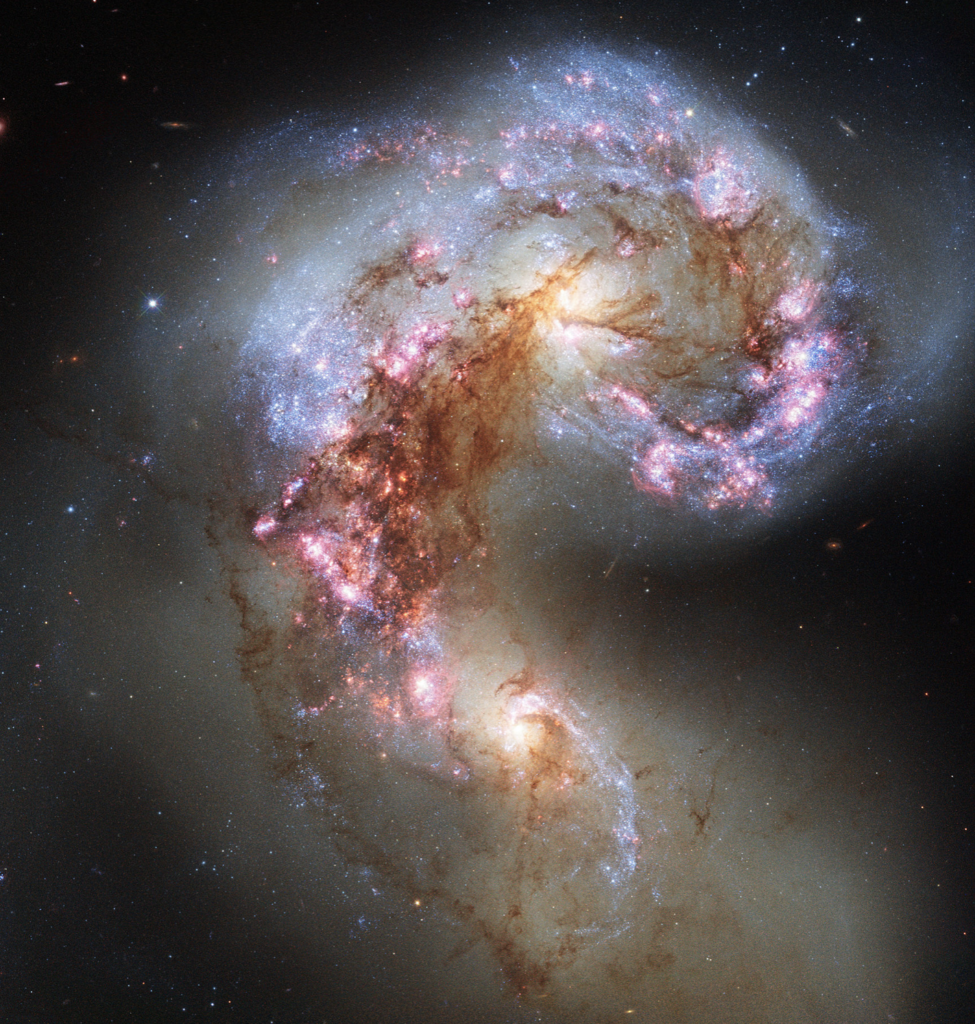 “In questions of science, the authority of a thousand is not worth the humble reasoning of a single individual.” Galileo Galilei

The Andy Savage saga continues. It is not going well for the golden boy. More on Friday.

Recently, I had the privilege of helping 2 people *get out* of their 9 Marks churches after their churches went after them, claiming that they were now *under discipline.* These folks have no connection with one another and, in fact, live thousands of miles away from each other. Both churches are in the US. One person found me by looking up the term *retroactive church discipline.”  As he said to me “I had no idea that this was a thing until it happened to me.*

Both of these individuals are long time, deeply committed Christians and both are educated and well read. One of them is a highly respected professional. Both of them were deeply upset, stunned, by the reaction of the pastor of these churches.

What is retroactive church discipline? This is discipline that is applied after the person has left the church. In both cases, the church leadership was notified that these folks  had decides to move on. I cannot give the names of these folks or the names of their churches at this time but I think we will be posting on these incidents in the future.

TWW gets about 4-5 requests a month, asking for help to get out of their churches. These churches tend to be Reformed Southern Baptist and PCA churches, although I have also dealt with these incidents in nondenominational churches as well as EFCA churches. In ALL instances, these churches have adopted 9 Marks materials which can be found on the churches websites under the resource sections or even quoted in the *what we believe* headers. Clues can also be found in membership covenants

Take home point:  Always check a church website before attending the first time and certainly check it before signing on the dotted *membership* line.

Take home point: Churches attempt to discipline if they determine the reason for leaving is not acceptable, even if the acceptability of an action has not been codified.

In both instances, this appeared to be about ego of the dudebro leader and he gets to discipline based on whatever he wants, oncoming his hurt feelings.

In both instances, there was no spelled out reason for the impending retroactive church discipline. However, it appeared the church leaders were attempting to control both people who had decided to move along. They viewed this as a rejection of their obviously superior, God given authority. I know their reasons and they seem normal and acceptable.

(Which raises the question: Do some churches get penalized by a sponsoring organization if numerical growth is expected? Anyone got an idea?)

In both cases, I advised them to understand that the law was on their side. One can dissolve  a relationship with voluntary organizations at any time so long as no criminal activity has occurred. Then, the police need to be informed. That was not the case here.

In both cases, after following my advice, both were able to successfully extricate themselves from their former churches. I have some advice on how to proceed in such a scenario. I also have some interesting actions that I recommend that I don’t talk about on this blog. I don’t want these groups to discover my advice.

However, I am willing to speak about some clever ideas in a one on one conversation. Actually, I learned a couple of these ideas from some innovative people who wanted to get out of their 9 Marks church (One even had an awesome leave-taking from CHBC-the mothership. I only wish I could share it because you would all laugh but my lips are sealed unless I’m helping someone to get out of these silly churches.)

In speaking with a representative of 9 Marks, I was told that this sort of discipline is not supposed to happen. However, as I tried to explain what had happened, I was shut down with “How do I know you have the full story so I won’t answer you.” They don’t want to admit that there is a problem.

Please refer to this permanent post at TWW: How to Resign From a Church Whether or Not You Are Under Church Discipline

Please let me know if I can directly help you. I have some clever exit strategies which I will share only on a one on one basis. I really enjoy helping out in the sort of situation. If it works, you have to send me a Christmas card each year!!!

Take home point: You have a right to leave any church at any time, not matter what it says in the *covenant.*

Did you know that 9 Marks churches give you a name tag which says you are a Christian or say you are not a Christian? I believe this is the crux of the matter. They are in charge!

Please refer to the post by Jonathan *Keys* Leeman: Does Church Membership Matter? Before I begin this section, I want to tell you a true story. I contacted a well known personality in the 9 Marks firmament. Here is the question that I asked to which I did not receive  a straight answer.

My good friend Todd Wilhelm, was added to the member care list at UCCD (John Folmar’s church in Dubai. Folmar and Dever are tighter than a corset.) So, I queried, during that looooong time when he was on the member care list which is a euphemism for church discipline, would he have his name tag *Christian* removed?

My point is this. This church discipline nonsense is usually applied for things like *divisiveness,* a term which should be translated to mean that the church doesn’t really like hearing what said person has to say, Given all the stuff I’ve read by 9 Marks, I believe that they would say that said person’s Christian commitment is suspect and they would therefore withdraw his name tag which says *Christian.*

However, in Todd’s situation, they would be dangerously in error. Todd confronted the church which was selling and pushing CJ Mahaney books. This was before Al Mohler finally threw him under the bus. In fact, Todd was a prophet in UCCD and they had the unmitigated gall to put him in time out retroactively when he walked out of the church.

Let’s read Leeman’s own words. As always, I would ask that you read his entire post. The first is a screenshot because it shows the title of the section. As a Lutheran, I have a real problem with his interpretation of communion. Communion is a sacrament which is given to each believer. Leeman does not believe that one should bring communion to a person in a nursing home because he believes that this can only be done in community. That belief horrifies me and I confirmed that this is NOT a belief in my denomination,. 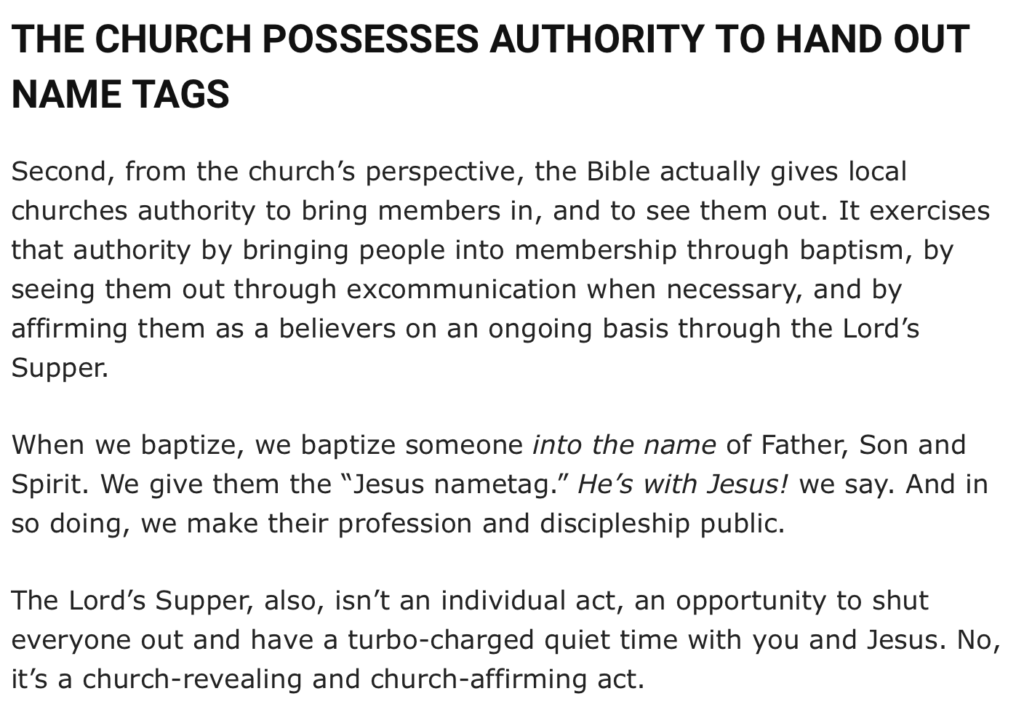 Leeman claims that the local church gets to say who the Christians are on the planet. Except, almost every church I know, including 9 Marks, gets it wrong now and again. There is only One who truly knows the heart of each person and that is the Author of the Book of Life. He doesn’t need 9 Marks be his ghost writer.

Having just spent time following in the footsteps of Paul, I had to laugh at this next statement. It appears one cannot be a Christian without being a member of the local church. Except…when Paul started evangelizing Greece, there were no local churches. Those took time to coalesce. There were also Christians who were truly alone in their culture.

And Leeman looooooves the key to the Kingdom analogy. In the following example, he says that these were given to the apostles. However, in his other writings, Leeman clearly expressed that each local church’s leadership holds those keys as well.

In other words, he sounds almost Catholic in his theology. It appears he is saying that today’s church leaders get those keys as part of a long line of apostolic leaders.

I believe that this is the core of the problem with 9 Marks. They truly believe they get to judge the actions of those who are leaving. Since leaders are the ones “holding those dadblasted keys” they can mistake their ego for leadership judgement. (What do you mean you are leaving without my permission? You are now going to be disciplined.)

I suspect that Leeman would disagree with my analysis. However, I believe that 9 Marks has never seriously looked at the long standing problems with their interpretation of their authority and how that is applied by the egotistical men there churches seem to attract. They steadfastlyrefuse to carefully assess their problems. They spout Scripture and stick their heads in the sand when they are confronted about their problems by those of us who hear about them when broken people in pain land on our doorsteps.

I will continue to say the following until I see a change:

I believe that 9 Marks is well aware of increasing reports of authority driven, abusive behavior in some of their member churches. I bet they might deny that they have any responsibility for such actions. I say that they do. They need to write some nice 9 Marks books on how not to be a 9 Marks bully.