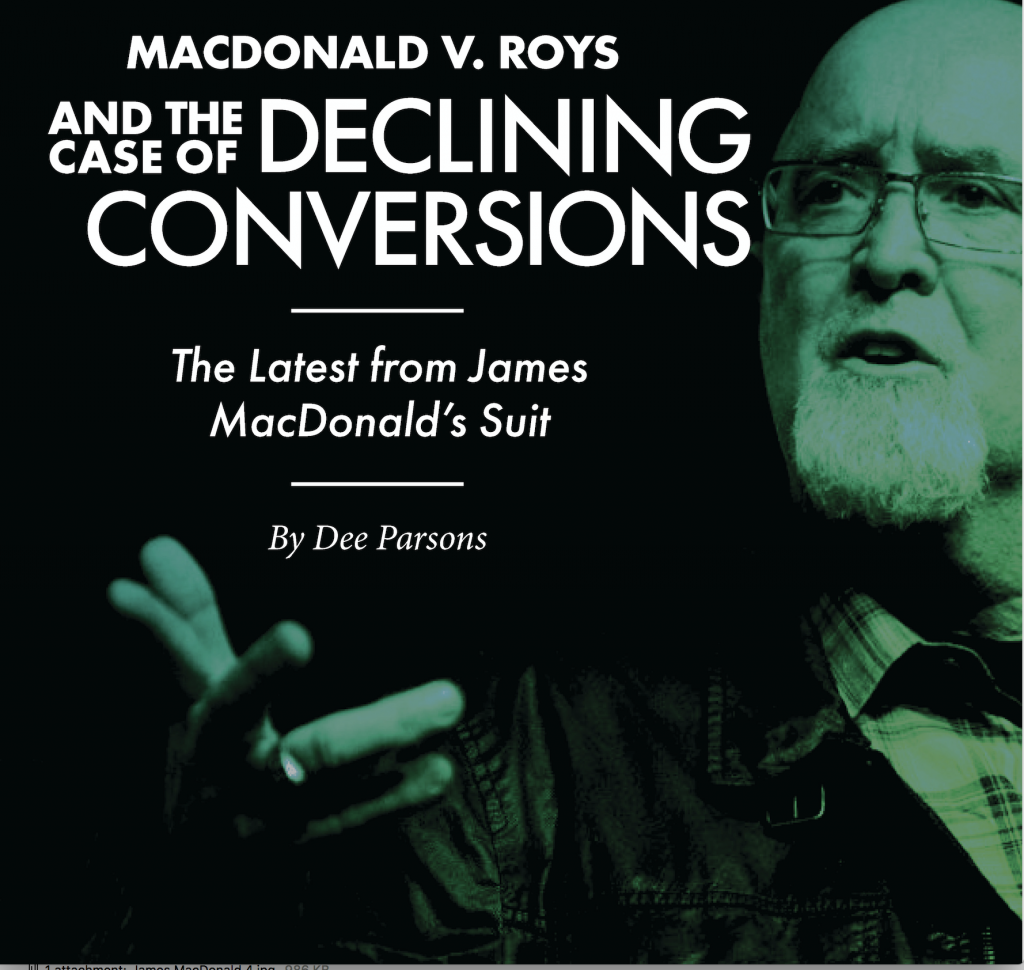 “The wide world is all about you: you can fence yourselves in, but you cannot forever fence it out.” JRR Tolkien

I wanted to let you all know that I am celebrating Christmas on Sunday because my husband and daughter are working on Christmas. I always have people over here and do all of the cooking. I’m even making homemade Farmer’s cheese for my pierogis. So, unless something major happens, I may put up a rerun column on Friday and post as usual next week.

Also, I will be spending two weeks in Israel and Jordan starting on January 7. I will have posts that are not time sensitive running during that time and will also try to post some pictures of the sites I visit. Thankfully, adult family members will be living at my house to care for the pug dogs and my backyard birds.

Should pastors seek redress by claiming, because of negative reporting, that they can’t convert new people to the faith?

Today, I spent some time going back over the stories surrounding the lawsuit that James MacDonald/HBC (hereafter knowns as JM/HBC) have filed against the bloggers. An action by JM/HBC made me sit up and take notice. Religion News Service posted Harvest Bible Chapel sues bloggers for spreading ‘false information’ on 11/8/18. How had I overlooked this? Many people who read this blog, myself included, like to discuss theology and this one fits the bill. I highlight the section of particular interest to me.

The plaintiffs asked a judge for a restraining order to stop the defendants from publishing information about MacDonald and the church while the lawsuit moves forward.

“Defendants’ false and defamatory statements have a negative impact on Plaintiffs’ ability to convert new persons to the faith, maintain their congregation and raise the funds necessary to operate,” the petition claims.

The judge denied the request.

I do not believe that TED, their wives and Roys lied. Leaving that aside for a minute, let’s look at JM/HBC’s claim that negative press had led to their inability to convert new people to the faith. Say what? How in the world does JM/HBC prove this one to a judge in a secular courtroom?

So, what is the problem with MacDonald’s request of the courts (which thankfully was denied?)

On 12/18/18, Julie Roys posted Harvest Elder Accuses Church Leaders of “Deceitfulness and Manipulation” and Attempting to “Run a Cult”

The following is an excerpt from the blog which featured emails that Roys obtained. There are many more in her post.

James MacDonald and the senior leaders of the Chicago-area megachurch, Harvest Bible Chapel (HBC), operate with “deceitfulness and manipulation,” and are attempting “to run a cult and control the masses.”

That’s according to Randy Williams, a current Harvest elder and former chairman of the executive committee (EC)—a group consisting of MacDonald and four to five elders, which make the financial and legal decisions for the church.

Williams makes these statements in a November 10, 2017, text I obtained through a subpoena in defense of the lawsuit Harvest brought against me. Williams tells Brian White, lead pastor of an independent Harvest Bible Chapel in Indianapolis, IN:

“I am fully recusing myself of any involvement with the EC (executive committee) and James (MacDonald) and XLT (executive leadership team). I’ve had it with the deceitfulness and manipulation.” (Williams)

This update and all that it represents is beyond my comprehension of anything but an attempt to run a cult and control the masses. (Williams)

Apparently, the Executive  Committee of the HBC Elders are upset with the emails that have been posted.

They responded in PASTOR JAMES, RANDY WILLIAMS, AND HARVEST ELDER AUTHORITY Hey, elders, this is what happens when you start lawsuits. All of these awkward things get released and it is hard to deny copies of emails, etc., which appears to be happening here.

We believe that Randy Williams is not the man portrayed in the texts publicized by Julie Roys. He has never said anything to the leaders of our church in the many years we have served with him that resembles the content of the texts she published today. If Randy Williams was secretly antagonistic about the health of our collective governance, it was not known to any of us.

…Randy has not been available to us by text or phone. Based upon what is known about his love for our church and Pastor James, we believe he must have read what Julie Roys published and felt devastated.

…For more than five years (from 2013-2017), Dr. Garrett Higbee, a respected counselor and member of our pastoral staff for eight years,

They thought it *wise* to post the following evaluations by Higsbee?

…Oct 2014 – “Love the spirit in the room. Elders are enjoying being together. They are owners at the table and expressed their questions in a good way.”

…June 2014 – “High [rate] of participation with great respect to contrary opinions. Observed an onus for responsibility of leadership. Reminder to not talk over one another.”

…Nov 2014 – “Thanks for bearing with a long process of tonight’s evaluation of the past. God is doing something good with the Elders. Thank you for submitting to the leadership of a smaller Executive Committee.”

It is my opinion that JM/HBC are facing a world of hurt. I find it difficult to believe that they will prevail in the lawsuit since there have admitted to some serious issues. TED and Roys have done HBC a favor by shining a light into the *chapel.* I don’t see how things can continue in this vein.

Please join my in praying for TED, their wives and Julie Roys.