"That church discipline is a difficult task for our professional clergymen is abundantly clear. Bungled cases and mangled people are strewn along the 9Marx highway in a scene of carnage reminiscent of the highway from Kuwait City to Baghdad in the first Gulf War.  I guess our clergy just need more 'practice' to get it right." 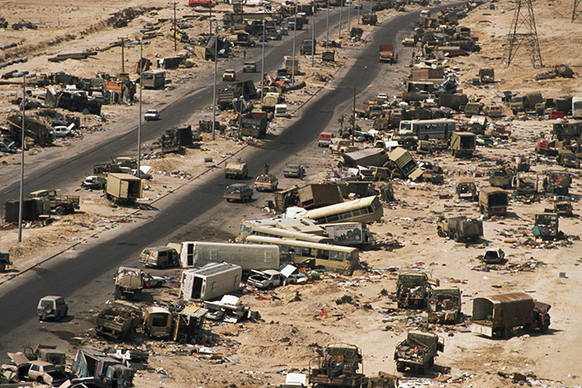 Thanks to the internet, more and more people are being exposed to the underbelly of the Neo-Cal / New Calvinism movement, and it is horrifying! As we are discovering, it is membership covenants that are keeping most of the sheep under control.

We are grateful that some brave brothers and sisters in Christ are coming forward and sharing their unbelievable testimonies in these highly controlling churches. Dee and I have been privileged to share their stories, and we hope even more Christians who have been hurt will come forward to warn others. 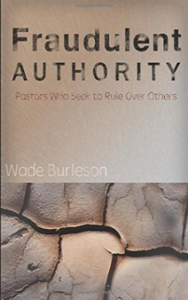 I am overjoyed that a pastor is finally taking these power-mongering leaders to task. Wade Burleson has recently published Fraudulent Authority: Pastors Who Seek to Rule Over Others, and I look forward to reviewing this book next week. Some of the chapters I will be highlighting are:

– The Infatuation with Church Authority

– Nobody "Rules Over" Anyone Else in the Body of Christ

– Five Reasons to Say No to a Church Covenant

– It Takes a Village Covenant to Raise a Bitter Root

This is a non-solicited endorsement of Wade's book for which we earn zilch!

Should you want to order a copy it is available in paperpack and through Kindle.  One reader really hit the nail on the head with his five-star review on Amazon. He wrote:

Authoritarian pastors and elders are becoming the norm in our evangelical churches. As we approach the 500th anniversary of the posting of the 95 Theses on the church door at Wittenburg, the Reformation understanding of the priesthood of the believer is sadly lacking in our churches. It has been replaced by the priesthood of the pastor. Wade Burleson has done an excellent job comparing improper authority with biblical authority. He writes: "There is no 'office' of authority in the church of Jesus Christ. Authority is to be experienced in the assembly because of the gifts and ministries of the Holy Spirit obvious through people."

This is in stark contrast to the 9Marks model of ministry that centers authority primarily in the office of the pastor-teacher, who is deemed to "stand in the place of God." Burleson gives detailed analysis of the verses that are misused or mistranslated to support authoritarianism. A great quote from the book: "What a tragedy that we have accepted a hierarchy of rulers in the local Church, which ends up limiting the freedom of so many members of the Church. Then, to add insult to injury, the ruled ones have their spirituality measured by their submission to the authority of those rulers instead of measuring the authority of leaders by their submission to the Lord." Burleson denounces the current trend of churches demanding signatures from prospective members agreeing to abide by church covenants that "turn their spiritual formation and maturation over to mere men instead of the Holy Spirit." He list five reasons that one should never sign these covenants.

Todd Wilhelm knows all too well what it was like being in one of these highly-controlling churches that overly emphasizes church discipline, and he is working tirelessly to get the truth out. Keep up the great work, Todd! 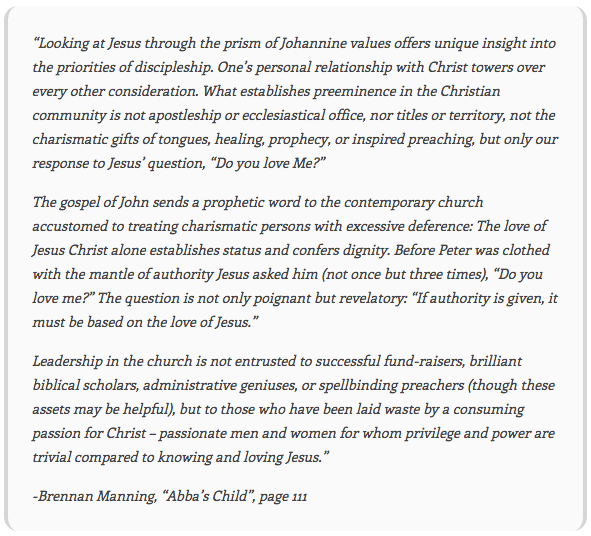 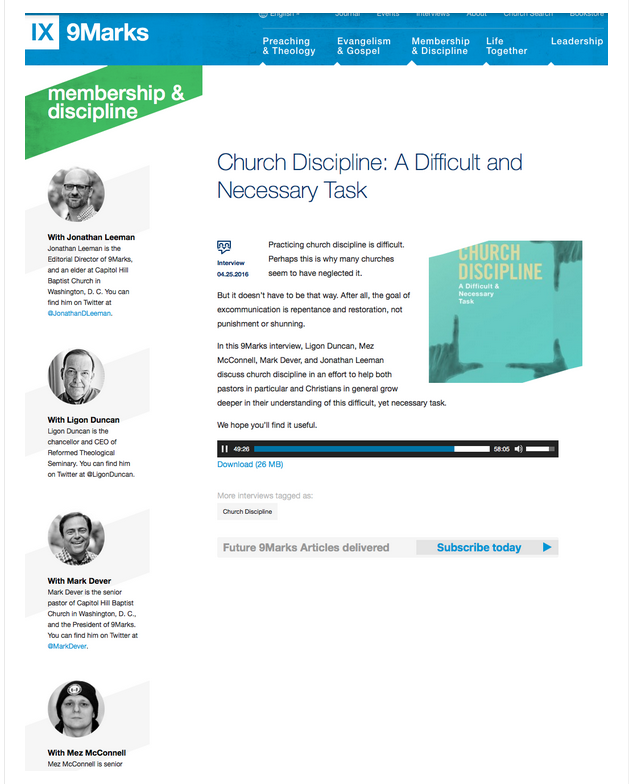 The 9Marx boys are at it once again! In what seems to be an endless discussion on church discipline, our boys inform us above that “practicing church discipline is difficult… but it doesn’t have to be that way.” They go on to say that they hope we will find their discussion “useful” and we will “grow deeper in our understanding of this difficult, yet necessary task.”

That church discipline is a difficult task for our professional clergymen is abundantly clear. Bungled cases and mangled people are strewn along the 9Marx highway in a scene of carnage reminiscent of the highway from Kuwait City to Baghdad in the first Gulf War.  I guess our clergy just need more “practice” to get it right.

The problem seems fairly obvious to this rock-throwing peasant. Too many of our present day evangelical churches are staffed with proud, pompous, narcissistic men who have been indoctrinated at institutions such as Southern Baptist Theological Seminary. These wet-behind-the-ears, legalistic young (and sometimes not so young) Pharisees are then turned loose on churches where they immediately attempt to change the church into the 9Marx mold. Lacking is any sign of maturity, wisdom, and most importantly, demonstration of the love of Christ. The end result is good people are damaged.  Examples are numerous, allow me to bring the latest one to your attention.  The Wartburg Watch covered the case of Marie Notcheva, (Link) a woman who had endured years in an abusive relationship.  The pastors at Heritage Bible Church of Princeton, MA were also horribly abusive to Marie. The Wartburg Watch was instrumental in getting the local newspaper to cover the story (Link) and that, along with getting an attorney involved, finally caused the abusive church leaders to back-off!

I guess the highly educated clergy at Heritage Bible Church just needs more “practice” at discipline.  The question is, how much more practice should church members have to endure? My advice to members in such churches is to “practice” church exodus!  It has been demonstrated that “practice does not make perfect” when it comes to abusive clergy.

Ah, but therein lies the problem.  Most often the trigger for abusive clergy to “practice” their discipline is your decision to leave the abusive church.  You see, unless you reassure the abusive clergy of the church you are leaving that you will be joining another church that holds to the same “gospel” of abusive discipline that they hold to, you may be excommunicated!  Absurd? Surely, but these highly educated men have never been accused of having common sense, much less compassion.

As a little refresher course, listen to the audio below of Matt Chandler spreading some love at his church.  Chandler is no novice in the pulpit. He pastors the Village Church in the DFW area – a huge megachurch, heads the national ACTS 29 church-planting organization, and is a celebrity conference speaker and author. He also had a famous case where his church was going to discipline a woman for getting an annulment from her pedophilic husband. (Link)

Knowing that most of my readers have busy lives, and therefore have neither the time nor the inclination to listen to the likes of Dever and Leeman pontificate for an hour on their experience of properly excommunicating rock-throwing peasants from their churches, I have undertaken the excruciating task of listening to these men for an hour in order to extract a few pearls for you.

Their obsession with church discipline, more specifically, excommunication, is painfully obvious. They chuckle and chortle throughout the session. Ah yes, screwing with people’s lives is so very amusing, is it not? At one point, towards the end of their knowledge-sharing event, Dever even apologizes for their behavior, attempting to quell any concerns he undoubtedly realizes will be forthcoming from the unwashed masses.

The audio below reminded me of the book “Green Eggs and Ham.” Leeman, in Dr. Suess style, asks his pals, would you, could you excommunicate?”

Unfortunately, their banter is serious. Leeman wants to highlight all the possible circumstances in which the clergy could correctly (in their opinion) excommunicate a member who has left his church. 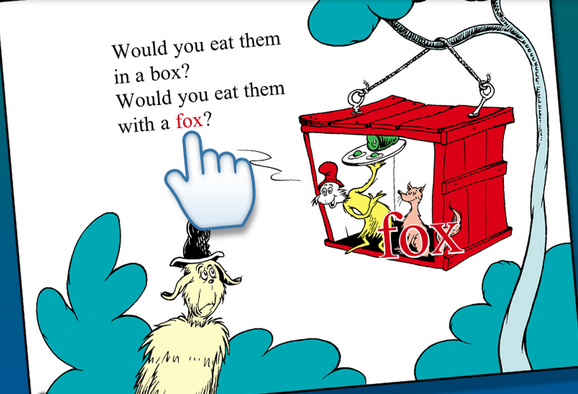 Though I find the whole discussion repulsive, it is telling in the way Leeman formulates his questions.  He asks each pastor if he would excommunicate a member from his church.  In my opinion, it betrays Leeman’s mindset that power and control are vested in the pastor. Mark Dever seems to also pick up on this as he rephrases Leeman’s question to: “you mean would I try to convince the Capitol Hill Baptist church to excommunicate said person?”

I submit that Leeman’s cavalier attitude, evident in his sloppy wording of questions, is not appropriate for such a serious topic. Neither is their levity.

But you know what questions I would like to ask the experts?

Mark, do you think it was appropriate to allow C.J. Mahaney to flee to Capitol Hill Baptist Church in order to avoid discipline at Covenant Life Church?

Mark, do you think a pastor should be disciplined for blackmail?

Mark, do you think a pastor should be disciplined for covering up the sexual abuse of children in his church?

Mark, do you think a pastor should be disciplined for not reporting crimes of sexual abuse of children to law enforcement?

Mark, do you think a pastor should be disciplined for establishing a hush-fund to keep a pastor whose son raped another pastor’s son quiet?

Mark and Ligon, do you think pastors who share a conference platform with a man who has done the things mentioned above should be disciplined?

Am I making you boys a bit uncomfortable with my line of questioning? Why are these types of questions never addressed in your attempts to help Christians “grow deeper in their understanding of this difficult, yet necessary task?”  I wonder if, behind closed doors, you laugh at the stooges in your churches who rubber stamp your recommendations for excommunicating people hurt by your unloving leadership, while never having a second thought about your preferential treatment afforded to a man who has donated thousands of dollars of his member’s tithes to your church?  You Pharisees nodded your heads in agreement with Al Mohler when he chastised Joe Paterno for covering up sexual abuse of children by an assistant coach; you again nodded your heads in agreement when he further stated that any pastor faced with similar credible charges should step down from ministry; but when your fellow celebrity preacher C.J. Mahaney turned out to be the evangelical example of Joe Paterno we quickly saw your lack of ethics.  Yet you want to lecture the evangelical world on church discipline? Please! Your actions have proven you to be hypocrites who have forfeited any right to speak as a moral authority to the church.

In the article, I raised the obvious question of why have Sovereign Grace leaders involved in scandals been quickly removed from their churches and any trace of them purged from Sovereign Grace websites, yet C.J. Mahaney, a man who, in my opinion, has committed equally grievous sins, still remains in his position of pastor and de facto leader of the denomination? I suggested the church is showing blatant favoritism to Mahaney because of his vaunted position.  This is precisely what James, in the second chapter of his epistle, warned the church about.

Providence Community Church is also a 9Marx church. It is my understanding that former pastor Wassink has left the church and is now residing in Minnesota. To my knowledge, he has not been excommunicated.  I am left to wonder whether the 9Marx boys may, during their next educational panel discussion, enlighten us uneducated dolts as to whether such a pastor should be excommunicated?

I submit it may be “useful” to let your 9Marx clergymen in on the fact that harassing women who have divorced an abusive husband and left an abusive church is wrong; excommunicating pastors such as C.J. Mahaney and Matthew Wassink is right.

Perhaps church discipline really isn’t such a difficult task after all! 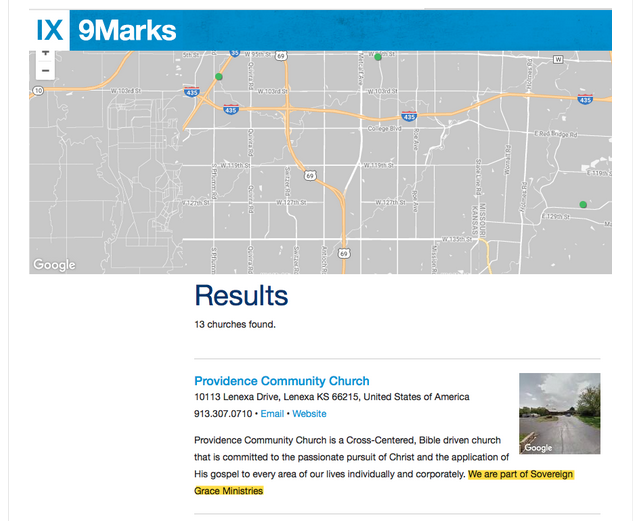