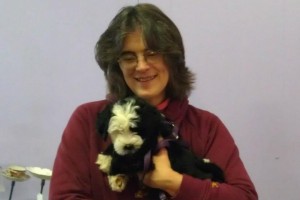 TWW was contacted by some friends of Jeri Massi. Jeri was operated on for a large tumor which turned out to be benign. However, due to the size of the tumor, the operation as quite extensive and has left her quite weak. You can read about it at her blog here. As if this wasn't enough, Jeri also lost her job.

These friends set up a Go Fund Me Account link here for her several months ago.

Jeri has dedicated herself to exposing the abuses in the IFB for years at great personal sacrifice. Here is a link to her blog Blog on the Way:Tracking Abuses in Christian Fundamentalism and Documenting Its Heresies. This blog is a wealth of information on abuse in the IFB.

We are adding her blog to our blog roll as well.

Why Jeri  *Who?* Here is an excerpt from As Bob Jones University and GRACE Reconnect, Former Students Help Us to Understand the “Whys.” Jeri has an interesting side interest.

The longer that I have been at this blogging game, the more I realize how little we understand about one another's cultural subgroups within Christianity. The word "unity" does not apply here. Nothing illustrates this more than the stories of this past week. Bob Jones University is an Independent Fundamentalist Baptist (IFB) stalwart while Bill Gothard practically invented a denomination of his own within the framework of evangelical Christianity.

A few years ago, we reviewed a book by Jeri Massi (who we met for lunch a few moths ago) called  Schizophrenic Christianity: How Christian Fundamentalism Attracts and Protects Sociopaths, Abusive Pastors, and Child Molesters This book essentially lists story after story of shocking abuse which are well known to many within  the IFB. Many people in the pews do not know these stories since secrecy appears to be one of the virtues of this crowd. Bob Jones University is one of the most well known of IFB colleges. If you want to get your eyes opened to abuse within the IFB, read this book. Note: We do not receive any monetary benefit for pushing this or any other book. We even pay for lunch!

(Quick digression for sci fi fans: Yes, this is the Jeri Massi of Dr Who fandom fame. She has diverse interests and is way cooler than the Deebs.) Here is an excerpt from our original post that eerily reflects the current situation.

I was dumbfounded at the reported number of pastors accused and convicted of child molestation. What is shocking is that many of these men continue to be involved in positions of leadership. The pastors, seen as specially anointed, are shielded from blame. Instead, the victim, who is under the age of consent, is usually censured for pursuing justice and there is a concerted effort to isolate and shun the victim of abuse.

The book also discusses the extreme patriarchal views that are taught in the IFB. Men are seen as the head of the church and family while women take a distant, secondary role. In this system, when there is a man and a woman at odds, the male “head” gets protected while the women are thrown to the wolves.

The following quote from the above link at Amazon tells the story. (Pastors) “…hold themselves above accountability by merging into a system that refuses to police itself or institute rules of behavior for its clergy.”

TWW asks that you pray for Jeri's recovery and consider making a donation to her as she recuperates from a particularly difficult time.