"Where two or more Southern Baptists are gathered in His name, there are at least three or more opinions. We are a lively and opinionated group. That will never change. But there seems to be a growing awareness that we must work together for the sake of the gospel. Too much is at stake."

Messengers are heading home from the Southern Baptist Convention's Annual Meeting held June 10-11 at the Baltimore Convention Center.  The theme of this year's gathering was Restoration and Revival Through Prayer:  Psalm 80:18-19.  That passage of Scripture states:

Then we shall not turn back from You;
Revive us, and we will call upon Your name.
O Lord God of hosts, restore us;
Cause Your face to shine upon us, and we will be saved.

Some messengers arrived early to attend the SBC Pastors Conference which preceded the formal meeting.  For the fourth year in a row, I watched some of the proceedings via live streaming.  Kudos to the SBC leadership for making this possible.  Also, the Baptist Press was live blogging the meeting and posting updates on Twitter and Facebook.  Yes, Southern Baptists are embracing social media in a big way!

Here are 7 things we believe you should know about the SBC Annual Meeting that just wrapped up. 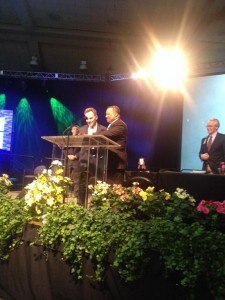 This year there were three nominees for SBC president:

Ben Cole over at Baptist Blogger has published an excellent analysis of the presidential vote.

The number of votes listed above is a clear indication of just how low the attendance numbers were.  Remember, Baltimore is situated fairly close to Southern Baptist churches in the Bible Belt.  Prior to the vote, the number of messengers registered was 5,001.  By the time the results were announced for SBC president, a few hundred more had registered.  If you add up the votes received by the three presidential candidates, it becomes clear that a good number of Southern Baptist messengers did not vote.  Why not?

(3) Transgender identity Addressed by the Convention

Yesterday, a messenger made a motion from the floor that the SBC should clarify its position against transgender identity.  Here is a portion of the motion that was accepted by SBC messengers.

RESOLVED, That the messengers to the Southern Baptist Convention meeting in Baltimore, Maryland, June 10–11, 2014, affirm God's good design that gender identity is determined by biological sex and not by one's self-perception—a perception which is often influenced by fallen human nature in ways contrary to God's design (Ephesians 4:17–18); and be it further

RESOLVED, That we extend love and compassion to those whose sexual self-understanding is shaped by a distressing conflict between their biological sex and their gender identity; and be it further

RESOLVED, That we invite all transgender persons to trust in Christ and to experience renewal in the Gospel (1 Timothy 1:15–16); and be it further

RESOLVED, That we love our transgender neighbors, seek their good always, welcome them to our churches and, as they repent and believe in Christ, receive them into church membership (2 Corinthians 5:18–20; Galatians 5:14); and be it further

RESOLVED, That we regard our transgender neighbors as image-bearers of Almighty God and therefore condemn acts of abuse or bullying committed against them; and be it further

RESOLVED, That we oppose efforts to alter one's bodily identity (e.g., cross-sex hormone therapy, gender reassignment surgery) to refashion it to conform with one's perceived gender identity; and be it further

RESOLVED, That we continue to oppose steadfastly all efforts by any governing official or body to validate transgender identity as morally praiseworthy (Isaiah 5:20); and be it further

RESOLVED, That we oppose all cultural efforts to validate claims to transgender identity; and be it finally

RESOLVED, That our love for the Gospel and urgency for the Great Commission must include declaring the whole counsel of God, proclaiming what Scripture teaches about God's design for us as male and female persons created in His image and for His glory (Matthew 28:19–20; Acts 20:27; Romans 11:36).

(4) On Sufficiency of Scripture Regarding Afterlife

Another motion was made that books such as Heaven is for Real should not be promoted in the SBC.  Messengers reaffirmed the sufficiency of scripture regarding heaven and hell.  Here is what they voted for:

RESOLVED, That the messengers to the Southern Baptist Convention meeting in Baltimore, Maryland, June 10–11, 2014, reaffirm the sufficiency of biblical revelation over subjective experiential explanations to guide one's understanding of the truth about heaven and hell.

(5) Paige Patterson Apologizes for Admitting a Muslim to SWBTS

The  president of Southwestern Baptist Theological Seminary, Paige Patterson, has recently come under fire for admitting a Muslim to SWBTS.  Here is how the Baptist Press reported on the matter:

A messenger asked Patterson for a "straight-forward explanation" of his decision to admit a Muslim student to Southwestern's doctor of philosophy program. In response, Patterson told messengers, "I come to give you an apology. I owe the convention an apology," especially to those for whom "I have caused sorrow, heartache or disillusionment." He explained that a Muslim participant in one of the seminary's archaeological digs in Israel asked to be admitted to Southwestern's doctoral program. Patterson admitted the student and believes he is "very open to the Gospel."

Patterson said, "I made an exception to a rule that I assumed, probably wrongly, the president has a right to make." The student is not funded with CP money, Patterson said, and has "not been a problem on campus."

Patterson said he also admitted non-Christian students to Criswell College when he was president there and those students came to faith in Christ. On judgment Day Patterson said he will have an answer for God regarding his decisions to violate admission policies at both institutions: "I violated a policy but I didn't want to stand before You with blood on my hands. Dear God, I did the best that I knew how."

You can hear Patterson's apology in this video, beginning at the 7:30 mark.  In an unusual twist, Patterson (at the 14:13 mark) mentioned the name of a former president of Baylor University who once admitted a student who was an atheist.  That college president was Rufus Burleson.  In case you're wondering whether Wade Burleson is related to this leader of Baylor, they are cousins.  Wade has written about his forefather here.  Patterson wraps up his talk amid tears (just after the 15:00 mark).  As you might imagine, Wade has weighed in on the matter.

Immediately following Patterson's remarks, Steve James, chairman of Southwestern's board of trustees, informed those in attendance that SWBTS trustees will be discussing this matter in September and October when the board convenes. Apparently, there has been much outcry about this Muslim student enrolled in a Southern Baptist seminary.

(6) A Church Endorsing Homosexuality is Addressed from the Floor

A motion was made that SBC officers consider disciplining a church in California that endorsed homosexuality.  That motion was ruled out of order.

However, the matter came up once again when Messenger Wiley Drake asked Dr. Daniel Akin a question following the SEBTS President's report delivered toward the end of the two-day meeting.  Drake wanted to know how the SBC can discipline a church in California that has changed its stance on homosexuality and is now endorsing it.  Akin's response was reported by the Baptist Press as follows:

Akin replied that local churches are responsible for church discipline. Seminaries can teach students "how to think biblically and theologically about those kinds of issues," Akin said. He told Drake that all six SBC seminaries teach importance and necessity of church discipline.

(7)  The Elephant in the Room – Child Sex Abuse

Incredibly, neither the SBC leaders nor the messengers addressed child sex abuse (to the best of our knowledge).

Perhaps some Southern Baptist messengers are clueless regarding child sex abuse.  To rectify this, a number of individuals stood outside the Baltimore Convention Center yesterday afternoon and passed out important information on this topic.  We will have more on this in our upcoming post…