"Humility is honestly assessing ourselves in light of God's holiness and our sinfulness." 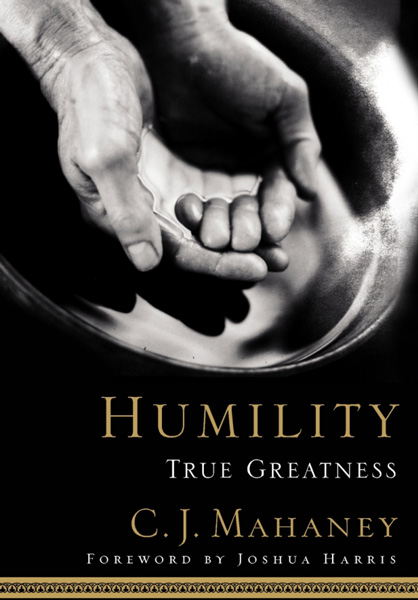 When Dee told me she would be discussing Jim Collins' popular book Good to Great in our current series on authoritarian leadership in Christendom, I remembered that C.J. Mahaney had used this bestseller as a launching pad for his thoughts on humility.  He begins his book Humility: True Greatness as follows:

"In a culture that so often rewards the proud–a world quick to admire and applaud the prideful, a world eager to bestow the label "great" on these same individuals–humility occasionally attracts some surprising attention.
Take, for example, the bestselling book Good to Great.  Since 2001, the leadership manual from Jim Collins has become one of the most popular and influential in the business world.  I rarely meet a leader who hasn't read it.  The book is driven by this question:  Can a good company become a great company, and if so, how?  To find the answer, Collins and a team of researchers spent five years studying eleven corporations that had made the leap from being merely good companies to being great ones.
I had the chance to hear Jim Collins speak on this topic to an audience of pastors and business leaders.  In his presentation, Collins identified two specific character qualities shared by CEOs of these good-to-great companies.
The first was no surprise: These men and women possessed incredible professional will–they were driven; willing to endure anything to make their company a success.
But the second trait these leaders had in common wasn't something the researchers expected to find: These driven leaders were self-effacing and modest.  They consistently pointed to the contribution of others and didn't like drawing attention to themselves.  "The good-to-great leaders never wanted to become larger-than-life heroes," Collins writes.  "They never aspired to be put on a pedestal or become unreachable icons.   They were seemingly ordinary people quietly producing extraordinary results."
When Collins interviewed people who worked for these leaders, he says they "continually used word like quiet, humble, modest, reserved, shy gracious, mild-mannered, self-effacing, understated, did not believe his own clippings; and so forth" to describe them.  (Good to Great, p. 27)"

Interestingly, Mahaney and his colleagues revamped PDI into Sovereign Grace Ministries a year after Good to Great was published.  Coincidence perhaps?  Mahaney then informs his readers that Good to Great has 'severe limitations' since it is not 'rooted in a biblical worldview'.  Was that Mahaney's selling strategy for his own book?  On pages 21-22, he writes:

WHAT IS HUMILITY?
"For me, Jim Collins's book was an encouraging reminder that even in a world that celebrates the proud, humility is still valued.  But books like Good to Great have severe limitations; they can take us only so far in understanding humility because they're not rooted in a biblical worldview.  Our definition of humility must be biblical and not simply pragmatic, and in order to be biblical it must begin with God.  As John Calvin wrote, "It is evident that man never attains to a true self-knowledge until he has previously contemplated the face of God, and come down after such contemplation to look into himself.
That's where the following definition can help us:  Humility is honestly assessing ourselves in light of God's holiness and our sinfulness.
That's the twin reality that all genuine humility is rooted in:  God's holiness and our sinfulness.  Without an honest awareness of both of these realities (and we'll reflect on both throughout the book), all self-evaluation will be skewed and we'll fail to either understand or practice true humility.  We'll miss out on experiencing the promise and the pleasures that humility offers.
That's why I want to direct you to God's help for evaluating your life honestly, to understand whether you're growing in the humility that draws His gaze and attracts more of His grace."

What we have been witnessing from the Calvinista camp in recent months could not be characterized as humility.  Instead, we have been observing an incredible display of arrogance by these so-called leaders from the T4G statement (which has subsequently disappeared), to The Gospel Coalition statement, to the e-mail from Wayne Grudem (via his assistant) to Todd Wilhelm.

In the wake of the SGM debacle, I believe it is important to journey back in time and see from whence some of these leaders have come.  Seven years ago Mark Dever introduced his good buddy C.J. Mahaney at the very first Together for the Gospel conference (2006).  Mahaney's message was called "Watch Your Life".  In all likelihood, a good number of attendees did not know much about Mahaney.   Here is a significant portion of what they heard from Mark Dever:

"It (meeting C.J. Mahaney) was one of the highlights of my Christian ministry life, not because I knew much at all about C.J.  See, I wasn't meeting a celebrity.  It's the Christ-like brother that I encountered, which just struck me and the Lord has used I'm sure to bless anyone who he entrusts to my care.  C.J. has affected me I think as much as anyone I've ever known with his joy that is obvious.  It's an encouragement even when you're up here preaching.  You know it's certainly even more of an encouragement I think when you're speaking with him.  My family loves it when they know C.J.'s gonna come.  They just smile cause they know C.J.'s gonna be around.  He is incredibly generous in so many ways that it would be embarrassing even maybe for him for me to tell you.  His humility is obvious.  He's the right one to write this book.  As I said C.J. Mahaney is not humble, at least that's what he'll tell you, and that's one reason he's so well qualified to write this book.  He is a model of someone who seems to live in gratitude, who seems to live in the knowledge of what God has done for him, and that is infectious.  God uses it hugely.  Combined with this is extraordinary leadership.  The movement of Sovereign Grace churches that has been raised up in no small part through C.J.'s leadership has to be one of the most exciting movements for me to look at because of the way the character of Christ is so obvious in you brothers.  It reflects I think not fundamentally C.J. but the Lord Jesus Christ.  But the Lord has used C.J. to do that, and I am so thankful for that.  And that's why it's so appropriate that he comes and he speaks to us about what he's going to this morning about application.  One of the things that has struck me again and again.  I mean just look at the books they produce.  Thank you Josh.  You know.  Thank you C.J.  Thank you C.J.  I mean what is it – it's applying biblical doctrine to our lives, and brothers how dangerous is a phariseeism that loves the intricacies of the doctrine but then it doesn't affect our hearts.  We turn people away from the Gospel when we live like that.  But God has given C.J. a great gift in giving him a tender heart that we know he cultivates, and it's that practice of cultivation that practice of straining to apply well when we taught that has brought about the character that most Christ-like character of all the love the is so obvious in the life of the whole movement and the love that's so obvious in C.J.'s life that ultimately commends the gospel, and that is what we are about.  So C.J., I love you, we love you, there's no one we would rather have speak to us about how to apply all this doctrine to our lives so come and preach to us brother.

Because things have been known to disappear from the T4G website, I felt it important to transcribe Mark Dever's remarks about his buddy C.J. Mahaney and preserve them in this post.  How much of what Dever said rings true today?

In just seven years, we have seen Sovereign Grace Ministries relocate its headquarters to Kentucky, Mahaney has had a falling out with his protégé Joshua Harris (and others) and has subsequently stepped down as SGM president, a good number of churches have withdrawn from the SGM "family of churches", and there is pending legal action.

What is even more upsetting is that these Calvinista leaders have built large networks under the guise of sound doctrine and 'humility.'  Some of these church networks are even mimicking SGM!

In some upcoming posts we will be taking a closer look at what appears to be a highly authoritarian Christian ministry – 9Marks – and its co-founder Mark Dever.

Please pray for some friends who resigned from a 9Marks affiliated church in March but have not yet been removed from the membership roll.  Apparently, they are required to join another congregation before the pastors will comply with their request.  Does that sound like a 'healthy church' to you?