"Some people, in order to discover God, read books. But there is a great book: the very appearance of created things. Look above you! Look below you! Read it. God, whom you want to discover, never wrote that book with ink. Instead He set before your eyes the things that He had made. Can you ask for a louder voice than that?”   -St. Augustine 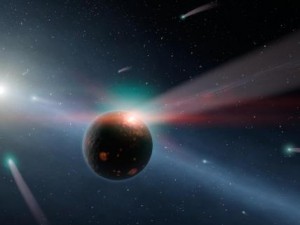 A storm of comets: NASA picture of the day.

Dee has not changed her mind one iota. I still lean towards theistic evolution. However, until a few years back, I subscribed to the "live and let live category." With the advent of the "take not prisoners, you are heretics" movement by some in the Young Earth department, I decided to go on the offensive. One of my chief criticisms of Ken Ham, and the Young Earth movement, in general, is their cussed refusal to allow their supposed "science" to be tested via a process known as peer review. They claim that there is a monstrous, world wide conspiracy of scientists who are intent on subverting the truth. As Deb will tell you, I hate conspiracy theories. They can never be proven or disproven so they continue to exist as "gospel" truth.

However,there is renewed hope due to one young earth scientist who appears ready to submit his work to this process. Although I believe that their is little chance that he will be able to prove that the earth is 6000 years old, I commend him for his willingness to give true peer review a whirl. One of our readers, John J. contacted me about this development. He has some thoughts about the article of two scientist which was presented in Christianity Today. So I suggested that he write a post. When I asked how he would like to be identified, he wrote:

"Old John J, now retired, received at Ph.D. in experimental physics from Duke in 1967 and made computer science his career."

John does an excellent job explaining the scientific method to nonscientists like myself. Join me in thanking John for his hard work. (Note: Dee chose the sections to bold.)

The  July/August 2012 issue of Christianity Today feature article “A Tale of Two Scientists”, pp 22-29, by Tim Stafford, here,  is given the cover with the teaser

“They agree about the scientific method but not about what happened 'in the beginning.'” The article 's introduction is “How two evangelicals – one a young earth creationist, the other an evolutionary creationist – have lived out their faith and professions.”

To adequately relate Wood's position with both mainstream science and the commonly held views of YEC I'll start by providing a brief overview of what science is and how it is done. Science is the systematic observation of the physical world and the development of theories that relate these different observations.

The hallmark of a good theory is how large and how diverse a set of observations it can explain. A good theory is predictive. It is possible to derive from the theory the expected results of an unmade observation. Good theory also enables the creation of useful technologies, essentially the same process as predicting observations.

The constantly repeating cycle of increasingly precise observation and improvement of theory is commonly referred to as the scientific method. The correctness of a scientific theory is not a voting matter. Most now well accepted theories were considered controversial when first proposed. Broad acceptance followed correct predictions by the new theories that could not be made by the existing ones.

The “hard sciences”, traditionally physics and chemistry are quantitative, where theory based numerical predictions of observations
can be made. With the development of DNA sequencing and manipulation, genomics, biology is rapidly moving from a descriptive, qualitative science to the “hard” group. This post is concerned primarily with the hard sciences.

The foundations of current science are the almost 100 year old theories of quantum mechanics and relativity. There is no experimental evidence that either of these theories have been unable to explain. All our 'techy" gadgetry and communications are built on the foundation of quantum mechanics. In addition the geometric methods of relativity are a necessary part of the Global Positioning System. The omnipresence of electronic and communications devices is itself strong testimony to the correctness of these theories.

As an aside, the scientific method can be encapsulated as hunch →hypothesis →observations → theory →law. Theories are well tested, supported by much experiment/observation and accepted by majority of scientists in a field. Denigrating something as “only a theory” is a gross misuse of the term.

A critical part of the scientific method is communicating your results, observation or theory, to your peers, others involved in related work.This is done by publishing in peer reviewed journals. Simply stated, the journal editor enlists the help of reviewers that are expert in the particular field impacted by the submitted paper. The review basically checks all the calculations, consistency of data with similar observations, use of relevant theory and adequacy of references to previously published similar work. The expectation is that the paper author will have done this adequately but checking often finds small errors or omissions. A scientific project is not complete until it has been successfully published. Your reputation as a scientist is built on the quality and quantity of your refereed scientific publications.

Science is a bottom up activity. General theories are found to explain observations. Science progresses by making observations and relating them to quantitative theories. Theological, philosophical or legal arguments are often made concerning the ramifications of a theory but do not impact the actual development and acceptance of a theory. A primary scientific objection to YEC is that it is a top down attempt to make science fit a preconceived religious viewpoint.

Science is very conservative in the sense that larger proposed changes require correspondingly larger and more definitive observational proof. Important experimental results that challenge existing theory or differ from similar observations will be independently replicated. New theories will be scrutinized to see if they make predictions that are contrary to known observations. Fame and fortune as a scientist comes from producing either significantly new and unanticipated observations or from creating more inclusive and more accurate theories. (Dee's note: It is important that readers understand that scientists crave to discover and prove something new or unexpected.)

Wood's hunch is that he can find evidence of animal “kinds” indicative of inclusion on the ark using the methods of computational biology and genomics. Where the hunch that leads to a research project comes from is not a problem. A Biblical based hunch is OK. His hypothesis on what to search for in DNA data is the most important part of formulating his project. Since evolutionary theory and a rapidly growing body of DNA data indicates that there is similarity in the genome of similar species, Wood's immediate problem is defining “kind” in a way that is detectable in DNA sequences but different from the patterns occurring from evolution processes. What sets Wood apart from the vast majority of YEC adherents is is attempt to justify his  beliefs by using the methods of science. Success is not a tentative or statistically insignificant answer presented in a blog, a conference or a non refereed online journal. A publication in a recognized, peer refereed journal is the only way to get acceptance of a controversial or unanticipated result.

The more controversial the proposed result is, the greater the required justification will be. The CT article doesn't touch on the huge (factor of almost 1,000,000) difference between the YEC desired age of Earth and the approximately 4.5 billion year age estimate from science. Since evolution already describes development of more advanced organisms from simpler ones over extended periods of time, I believe time will have to be part of Wood's YEC based hypothesis concerning genome analysis. Face it, any theory consistent with YEC represents about as extreme a revision to accepted science as can be conceived.

The CT article also contains an interesting sidebar. Implicitly, the real debate on origins is theological within Christianity, not between
science and YEC. Rather than characterizing the physical world and building theories to explain what is found, YEC tries to create a physical world description that fits their narrow view of Scripture and impose it on believer and non believer alike. My opinion is that YEC, by trying to act like science and make scientific sounding claims but without the rigor of  fields they mimic, is regarded solely as an irrelevant fringe activity by mainstream science and by its intellectual looseness calls into question the veracity of our claims about our Lord.