In my ongoing efforts to provide the proletariat of The Chapel with some transparent truth, I felt it was important to get a few more things out in the open prior to the Town Hall meetings. In case you forgot, here are the locations and times. I am told that there are still many available seats, so if you are interested in hearing from your leaders you may want to attend.

First, I have some breaking news. In the 7-year reign of former Senior Pastor Tim Armstrong 78 employees of The Chapel were fired! That is not counting people like Mike Landis, who saw the writing on the wall and decided it was time to resign. In my opinion, there is no way the men on the Board of Trustees would not have known this was taking place.

Next, I have been provided a copy of the 2019-2020 audit of The Chapel. You will find it in its unaltered state below. One item of note, Julie Roys is not impressed with the firm that does the outside audits for the Chapel, and if she is not impressed, you should not be impressed either. 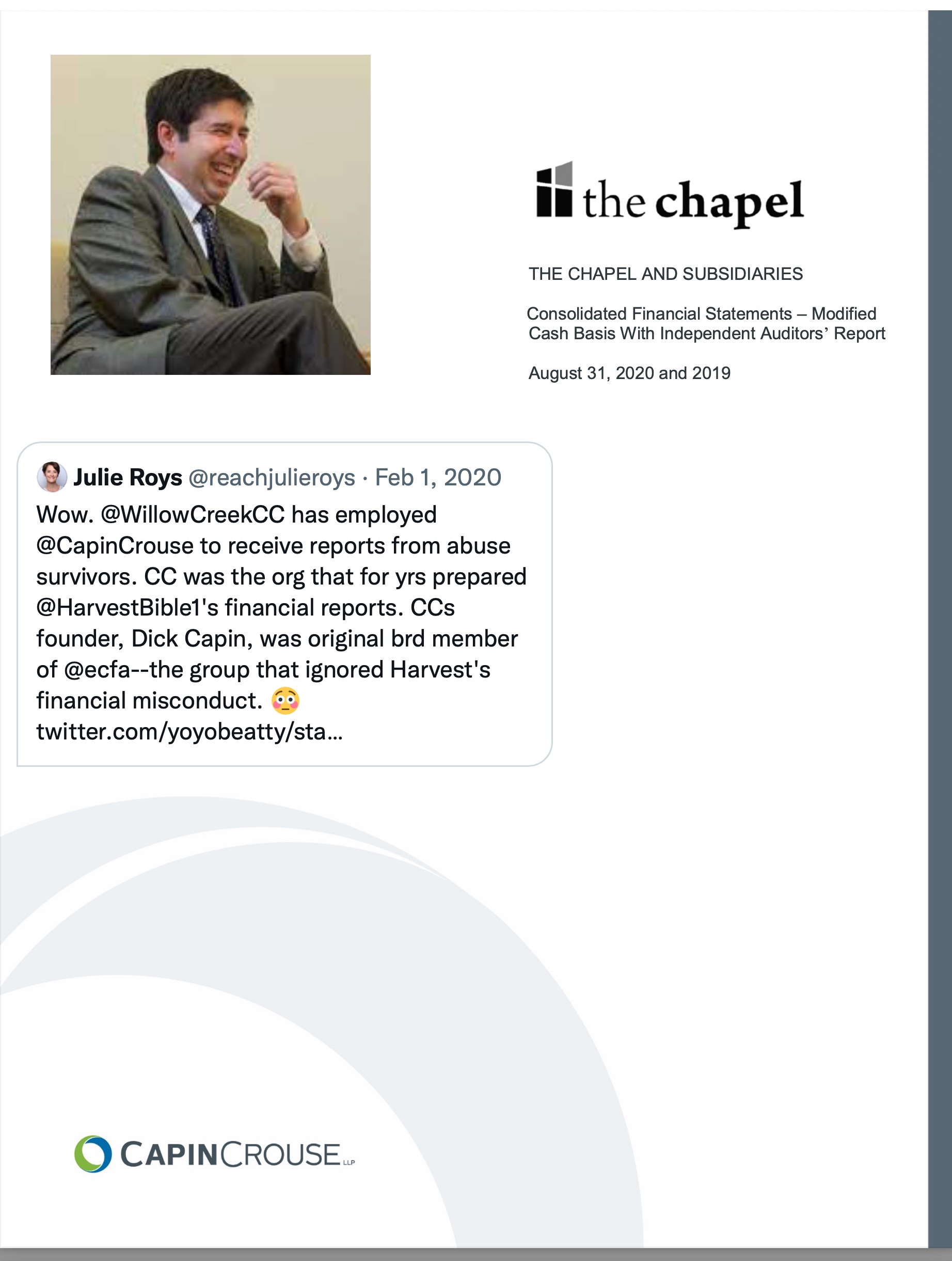 Below is the actual report. Note – it’s possible for you to download this document.

Next I will share email exchanges I had with Chip Weisel, Chairman of the Board of Trustees, and Mellisa Trew, the Public Relations Director for The Chapel. I was simply attempting to find out who the Treasurer for The Chapel was. The position is mandated in their Constitution, but as I have been researching The Chapel it has become apparent that leaders routinely ignore the document.

I was basically given the California Howdy.  I know, I know, you are thinking how does an organization committed to transparency be so un-transparent.

O.K., you weren’t wondering that. Neither was I.

Next I want to raise an issue that caught my attention. It is an add for the job of Finance Director. As you saw from my email exchange above, Melissa and Chip weren’t very helpful, but I discovered that the Finance Director is a fancy title for Treasurer.

What caught my attention is the fact that the Finance Director (Brian Miller) reports to the Senior Pastor (formerly Tim Armstrong) and works directly with the Executive Pastor (formerly Jim Mitchell).

From the early days of this scandal I was wondering why Jim Mitchell resigned/was forced out of his position. Was it simply because he was good friends with Tim Armstrong? Doubtful.

You may recall in my article about Tim Armstrong attempting to “buy out” Mike Castelli  I raised the issue of how much money was Castelli offered and where was this money coming from?

I have zero proof and no source that has told me this, it’s purely speculation on my part, but I say again, I would want to thoroughly check the finances of the Chapel going all the way back to when Tim Armstrong was hired. I would hire a firm that specializes in this, and it would not be CapinCrouse. I could make other suggestions, but I am sure there are members in the Chapel that are picking up what I am putting down, and are financially sharp. They are who I would turn to for advice. 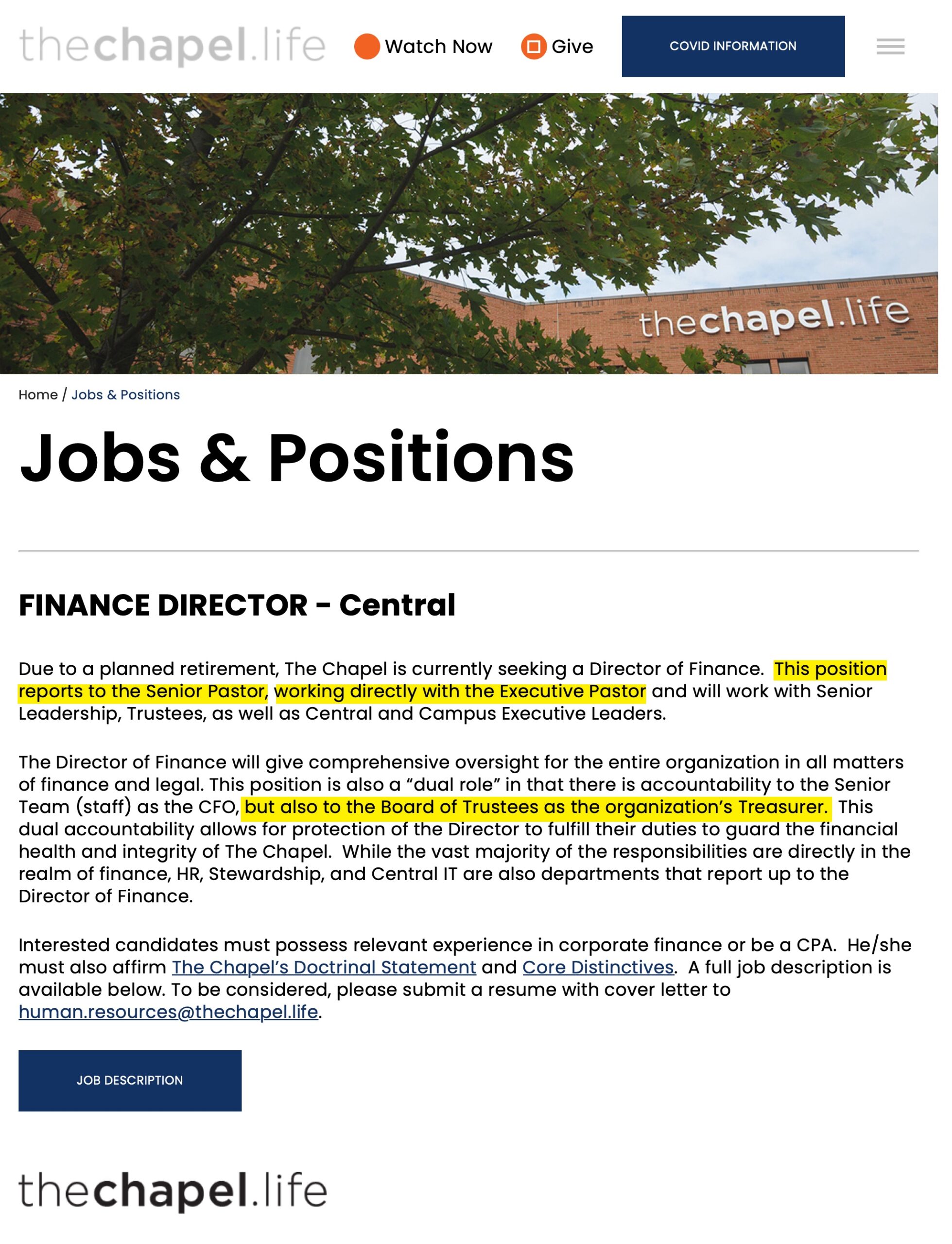 One more item and then I will be done. How many of you know Tim Knight? 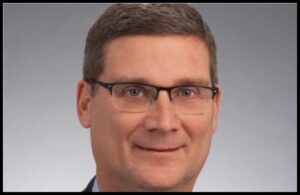 Knight is a former member of The Chapel’s Board of Trustees. He is a current member, along with Tim Armstrong, of Cedarville University’s Board of Trustees. He graduated from West Point and has held many distinguished positions over the course of his life. So, I imagine members of The Chapel hold him in high regard and listen to what he has to say. 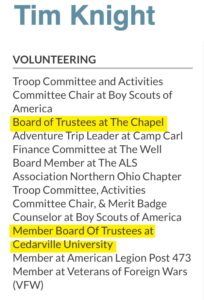 Tim Knight submitted the following question for leadership to answer at the Town Hall meetings:

How does Tim Knight know that Tim Armstrong was not permitted to “respond to the consultant’s survey to provide context as Mike Castelli was permitted to do twice?”

Were any of you aware of this, or is it privileged information provided to a select few?

This question made it through moderation, even though it appears to violate the condition below:

“Refrain from making accusations, and do not presume guilt or wrongdoing that hasn’t been publicly clarified. We will not approve questions that accuse staff members, church attendees, or their families of improprieties that do not appear in the Summary of Findings.”

“All animals are equal but some animals are more equal than others.”
-George Orwell, Animal Farm

And therein lies your problem.

My prayers are with the pure in heart that want to right the ship. May God bless your efforts.