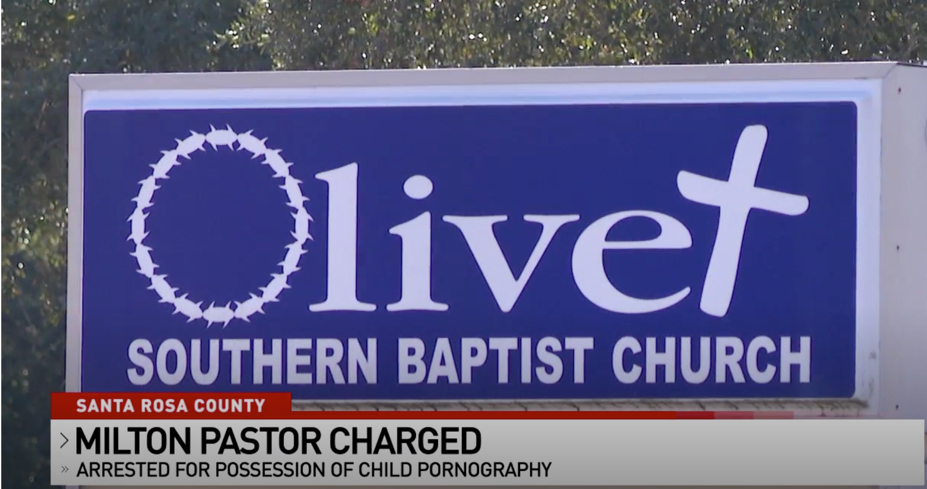 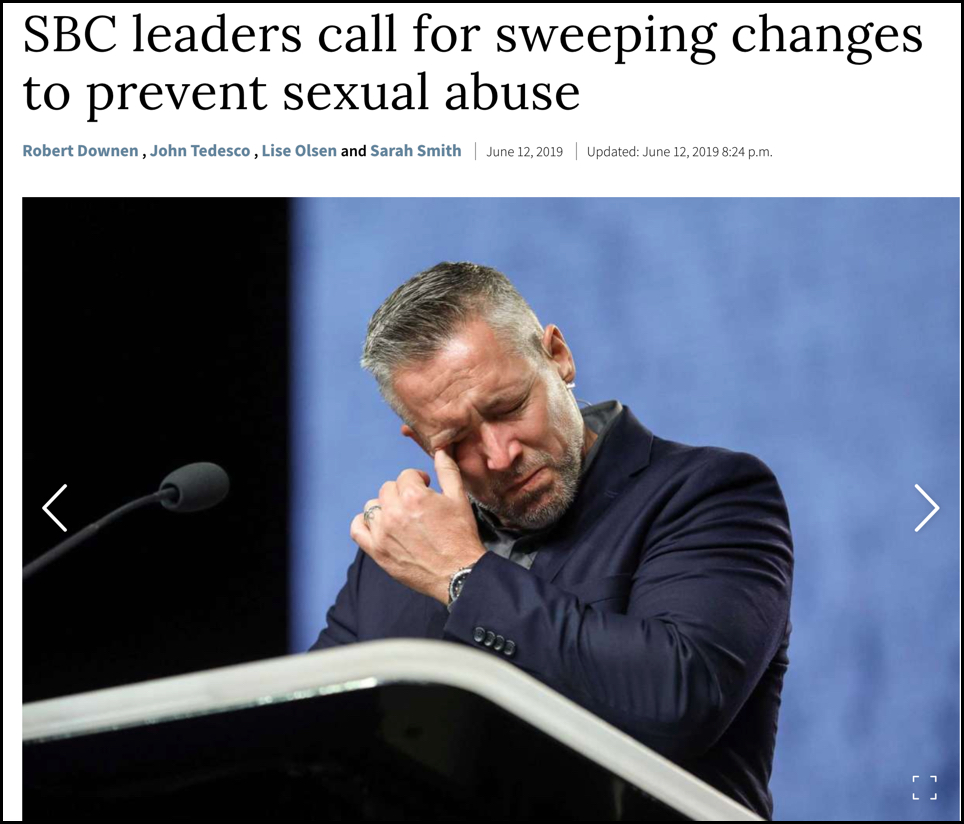 Would someone in the SBC do their denomination a favor and tell J.D. Greear that he has no clothes? Those inside the SBC bubble may not realize it, but Greear is doing a great job of making the SBC the laughingstock of Evangelical Christianity. Greear, President of the SBC, shed some crocodile tears in 2019 after the Houston Chronicle published a groundbreaking story on the sexual abuse of children by pastors in the SBC that rivaled that of the Roman Catholic Church. Greear promised action and tasked the ERLC with rolling out a program tagged “Caring Well.” Promises of reform were made, to my knowledge none were carried out. Ten SBC churches were initially named as the worst offenders in the denomination and it was promised these churches would be scrutinized closely. Sovereign Grace Church of Louisville, pastored by the infamous C.J. Mahaney made the list. They remain a church in good standing! In fact, I believe only one church on the list is no longer in the SBC, and that is because they withdrew on their own accord. 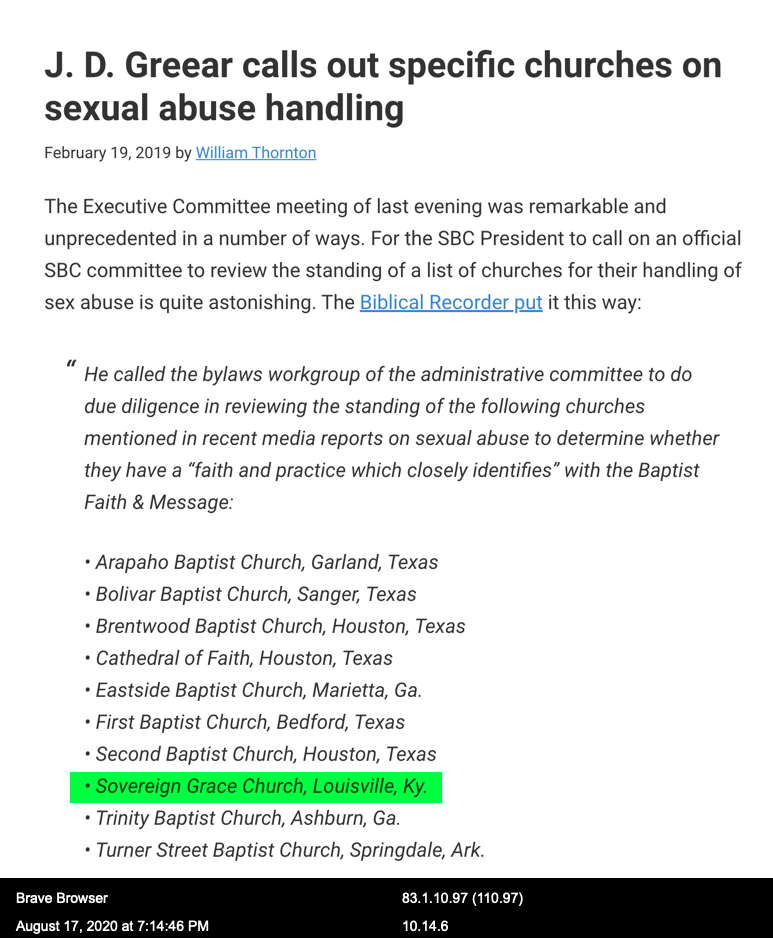 Greear, apparently jettisoning any concern for the abused or “Caring Well” made an ill-advised hiring of Bryan Loritts in May of 2020. The hiring was immediately met with wide-spread criticism as “ten years ago, accusations arose that Rick Trotter, Loritts’s brother-in-law, was involved in sexual misconduct at Fellow­ship Memphis, a church Loritts helped found in 2003, and where Trotter was worship director.” (Link) Trotter had hidden his phone in a church bathroom and was secretly taking videos.

According to an article by Julie Roys:
“The employee gave the cell phone, with dozens of secret recordings on it, to Loritts. Loritts did not report the incident to police. He instead took the phone home with him overnight. The phone has since vanished. Loritts initially said he gave the phone to the elders at Fellowship Memphis. He later said he gave the phone to Fellowship Memphis Pastor Bill Garner and doesn’t know what happened to it afterwards.” 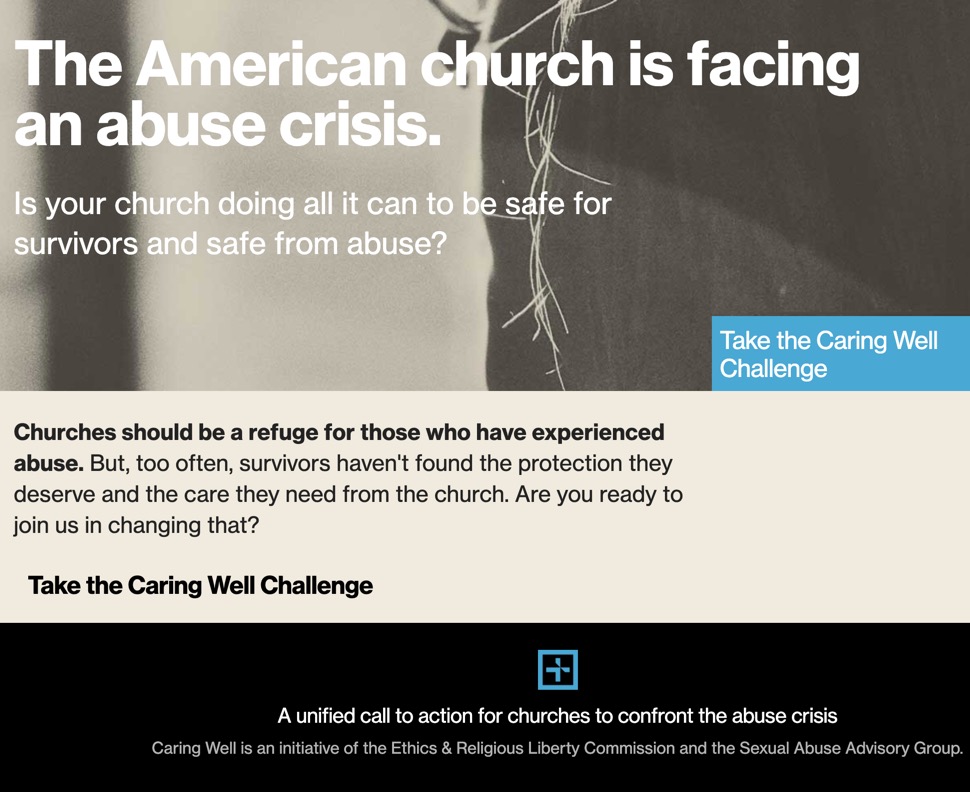 Fast forward to Monday, December 14, 2020. I was informed that yet another SBC pastor had been arrested for child pornography. William Dalton Milam, pastor of Olivet Baptist Church in Milton, FL was jailed and charged with two counts of promoting the sexual performance of a child and 25 counts of possession of child pornography. 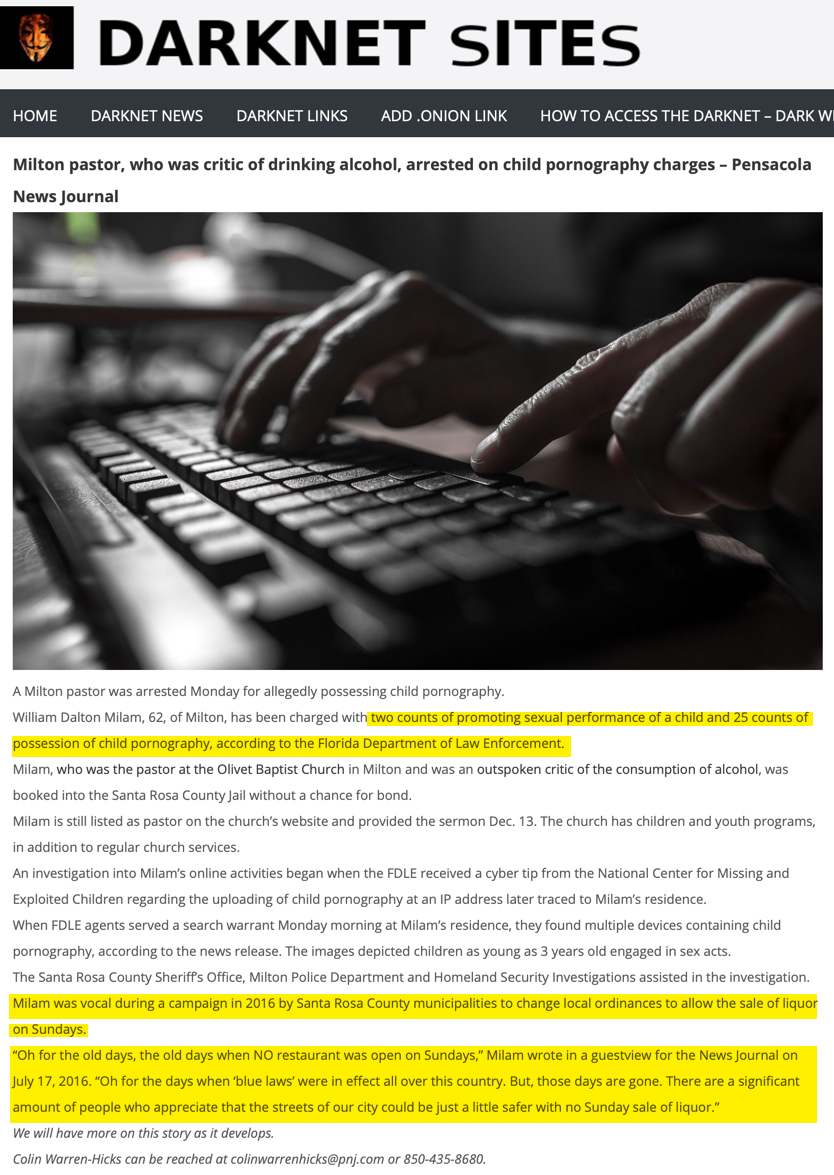 As you can see, Olivet Baptist Church is a member in good standing of the SBC! 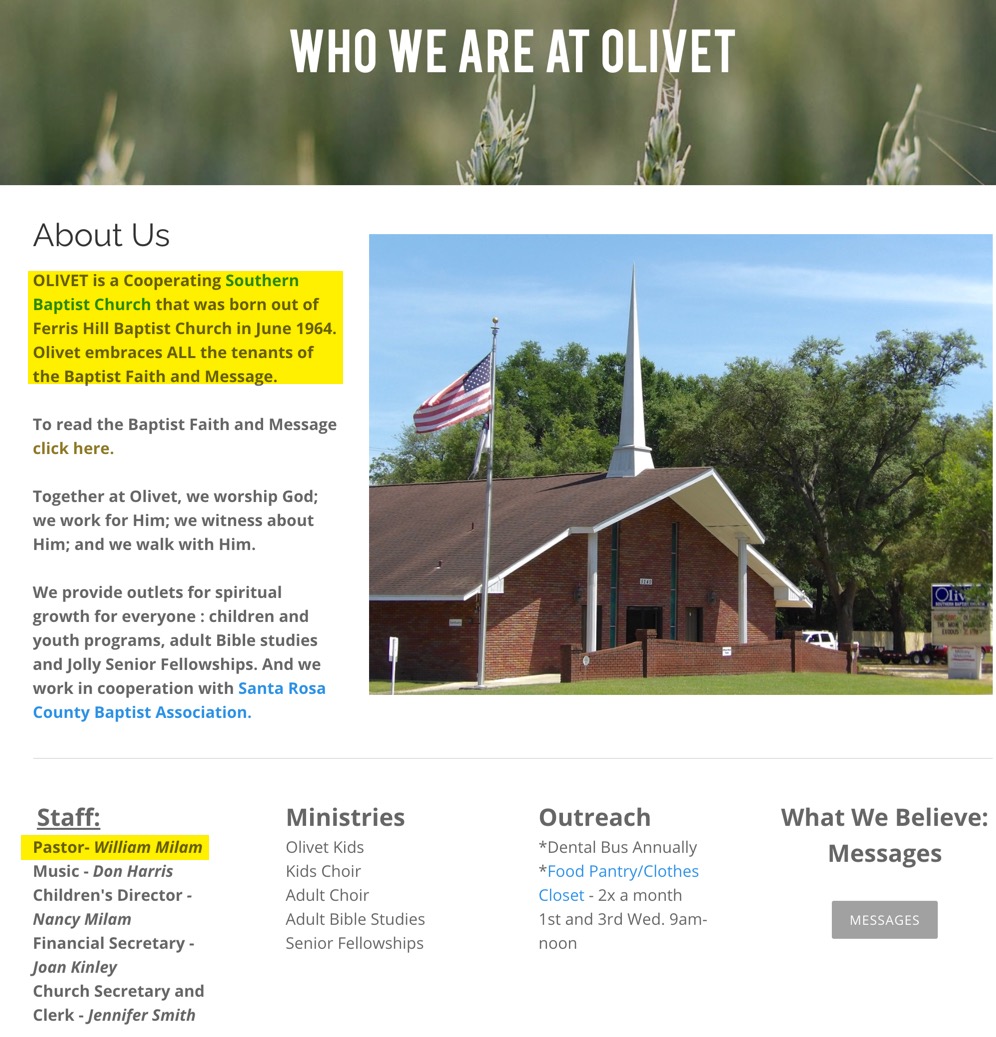 On Tuesday, December 15, 2020 web scrubbers at Olivet Baptist Church were busy. They removed all photos of William Milam, most of his sermons (though, curiously, they left his two most recent sermons up), his introductory video where he gives a short Gospel presentation, and they have removed the names of him and his wife (Nancy) from their staff. Below is the revised page showing they are no longer listed as staff. 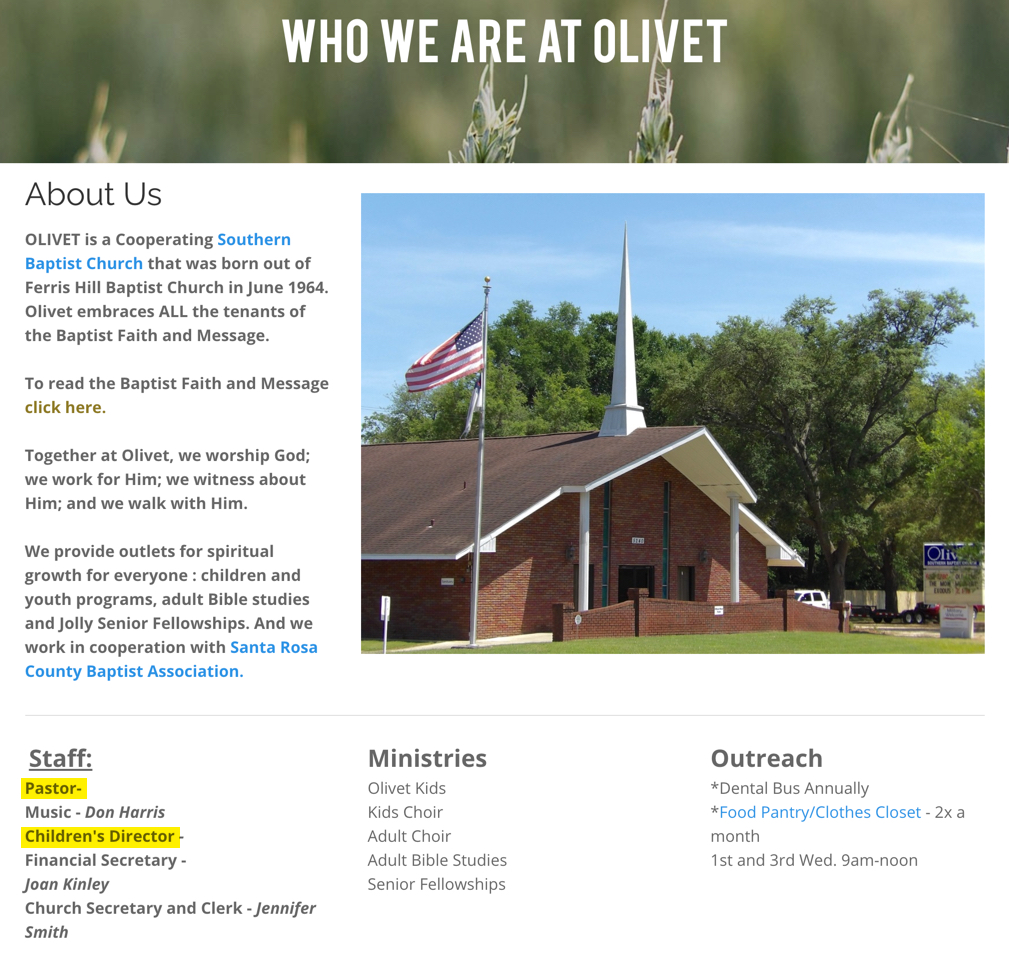 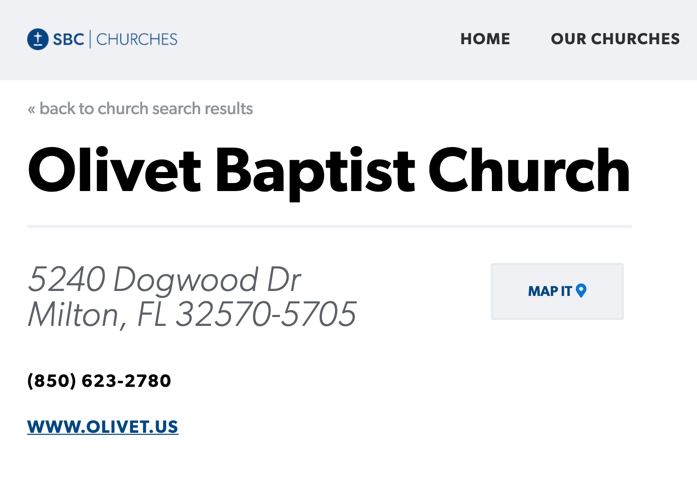 Pastor Milam is a former Navy Chaplain. I was unable to determine if he has been a pastor at any other churches. If you have young children and attend Olivet Baptist Church or have attended any church where Milam has worked I would be very concerned. Relatives of Milam with children would also be advised to question their children who are old enough to comprehend sexual abuse.

It appears to me that those who hired Milam failed to exercise due diligence in their hiring process.  I did a quick background check on the alleged pedophile today and found that he was arrested in Denver, CO in 1998  for “any act of prostitution” and “solicit of prostitution.”  Clearly, William Milam has some serious issues and is totally unfit for working as a pastor. I find it hard to believe that over the years nobody is aware that this man is a dangerous predator.

Perhaps as a minimum “Caring Well” could conduct a criminal background check on every pastor in their denomination. That would be a good start on caring well for SBC church members.