Steve Baughman is a lawyer. He is an honest, intelligent man. He refers to himself as the “Friendly Banjo Atheist,” and he has been documenting the corruption of the recently deceased Ravi Zacharias for several years. In my opinion, Baughman has done the Evangelical world a huge favor by carefully documenting the numerous lies Zacharias has told, as well as exposing his sexual corruption. He attempted to alert us to the fact that one of our heroes was, at best, a hypocrite, and at worst, a sexual predator. Unfortunately, it seems not many evangelicals wanted to listen to what he had to say. Among the celebrity Christian leaders, this is understandable – many of them had a lot to gain financially by continuing to support Zacharias; not to mention the fact that many of them have a closet full of skeletons themselves. What saddens me is the fact that many of the pew-sitters seem to have no desire to discover the truth about Zacharias. Ignorance is bliss. Where do I send my support, they ask? It is not unlike the church members that support their pastor by showing up at court for his trial of sexual abuse of a child, while shaming and shunning the victim and his/her family.

I believe I first heard of Steve Baughman a few years ago, as I recall it was through Julie Anne’s blog – “The Spiritual Sounding Board.” I purchased Baughman’s book and it was a doozy. His proof of Zacharias’ corruption was undeniable, well, at least it should be for any clear-thinking individual.

Julie Anne seems to have been the first to post about the latest corruption that Steve Baughman has uncovered about Zacharias. You can read her post here. Baughman has revealed that Zacharias owned two “health spas” and allegedly sexually abused some female employees!  Julie Anne was appropriately enraged, writing:

“When will the Evangelical Church at large deal with this honestly and do the right thing? I’m waiting. I’m sure Lori Anne Thompson is waiting. And you know what . . . . every survivor of clergy sexual misconduct is waiting to see someone do the right thing. Because when the rubber hits the road, that is what it’s going to take for true healing to occur. Until that happens, we will continue to see this scenario play out again and again and again. I’m so over it, people! So over the stupid facade of Evangelical Christianity with supposed integrity and upstanding character. Because as far as I am concerned, there is very little of it.

DO BETTER, CHURCH! For crying out loud, why is this so freaking difficult? I better hit publish before my panties get in a wad.”

Here is the video Baughman produced with the evidence.

I found this Tweet from “ahem” Dr.Bryan Loritts in May. It had been announced that Zacharias was quite ill and wasn’t long for this world. The words that caught my eye were “grace” and “truth” referencing Zacharias. This from the guy that has no idea what happened to the phone his voyeuristic brother-in-law had all the secret videos recorded on. I think Lori Anne Thompson would be unlikely to use the same words that “ahem” Dr. Loritts chose. 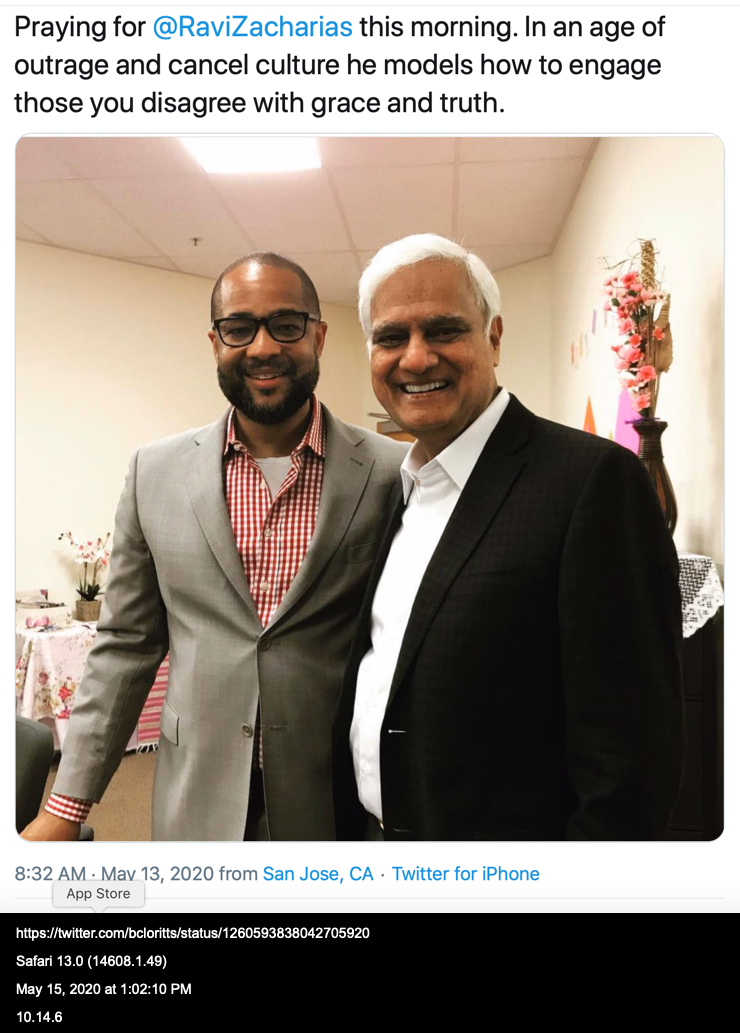 I have never been a huge fan of Sam Alberry. Somebody needs to ask him how much money he pockets as a global speaker for RZIM. Then again, I haven’t checked lately, maybe after he found out the truth about the man who signed his paycheck he resigned! He is not the only celebrity to have drawn a paycheck from RZIM. Maybe someone can list all the others in the comment section. 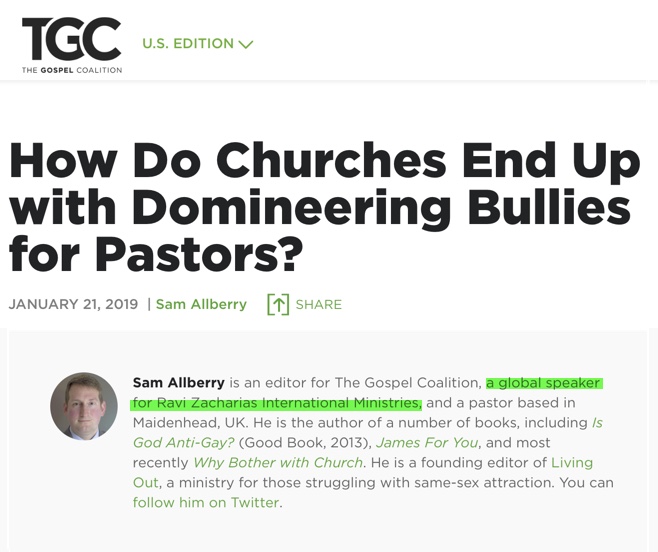 One comment I did appreciate, and obviously saved, was a retweet by Rachael Denhollander of the “Tentative Apologist.”  I totally agree.

This comment was from Julie Anne’s blog. A flood of adulation. Yep. It makes me ill.

Below are a few more videos from the “Friendly Banjo Atheist.” I would suggest people stop sending money to RZIM. Buy Baughman’s book instead. Invest in truth, not lies.