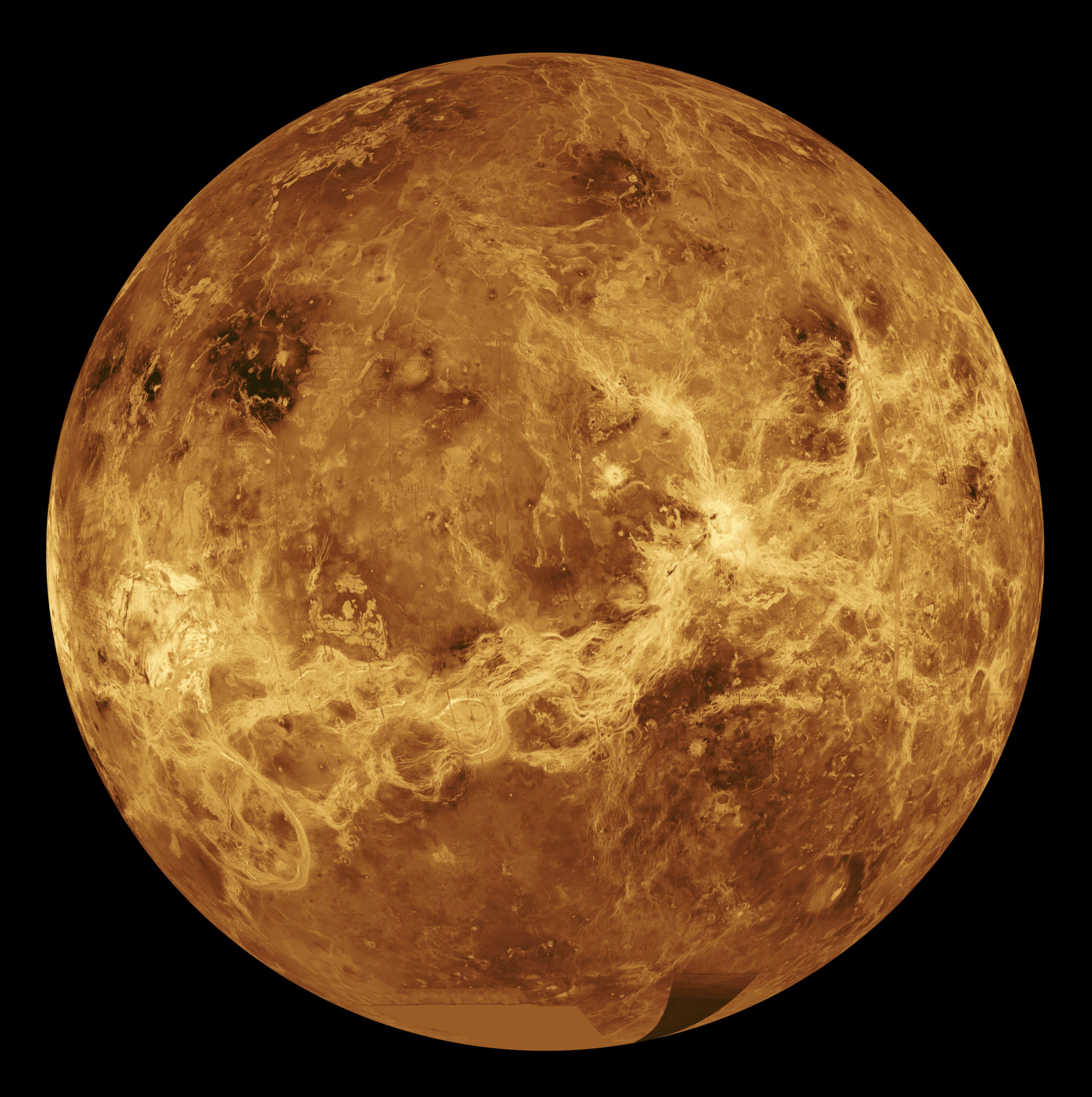 When we Christians behave badly, or fail to behave well, we are making Christianity unbelievable to the outside world. C. S. Lewis

I have been working with a journalist for a well known publication on a story that you will learn about in the near future. This person has been more than professional in our relationship and has made it easy to with him/her. Recently I wanted to send this writer a couple of books for the family to use in reading to their children. They cost about $15.00. This writer’s response was “I’m not allowed to accept ANY gifts. Please give me the name of the books and I will pick them up instead.”

Let’s go back to Friday’s post and look at what I wrote about Ed Stetzer. Another Letter From an Employees at Harvest Bible Chapel and a Question: Were Ed Stetzer and Other Pastors Given Cars Paid for by HBC?

Does anyone know if pastors at HBC are given cars for their use? I’ve been informed by some reliable folks that James MacDonald gave Ed Stetzer a vintage Volkswagen Beetle convertible. I’ve even been given the vanity license plate but won’t post that. I was informed that the car was paid for by HBC funds. Given the recent reports out of HBC, I felt that this was worth investigating.

I left a message for Pastor Stetzer today but have not heard from him at this time. I will post an update if I find out. If that car was given to Stetzer(and if other cars were given to pastors) and the cars were paid for by church funds, I believe the car(s) should be returned to the church or the church reimbursed. Goodness knows, they need the cash. 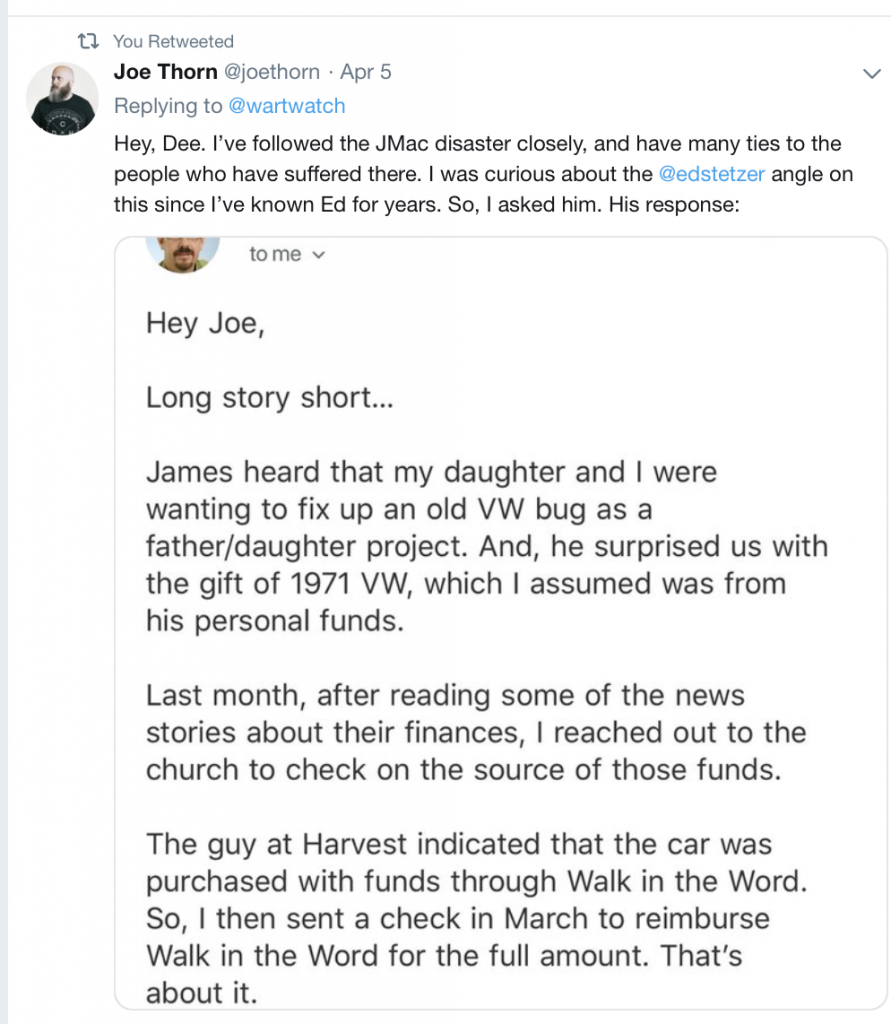 He also said that Ed doesn’t have to answer to anybody on Twitter which got a resounding *Excuuuuuuse me* from me.

Joe Thorn also stated that Ed Stetzer does not have to answer to *randos* on Twitter. Dee is so excited to have a new name to add to her collection which leads nicely into the subject at hand. I did mention to those on Twitter than I am an adorable rando…

Joe Thorn changes the story a bit on his broadcast.

If you want to hear how stories change, listen in at about the 3:40 mark for about 5 minutes. Stetzer did not describe the shape of the car that he received from MacDonald. I do wish these guys would stop trying to sound like warmed over Mark Driscoll dudebro wannabes. Good night! This is a serious subject and you will see what I mean momentarily.

Ed Stetzer got a car, confirmed it happened and then claimed to have paid it back, quite recently, while at the same time getting stabbed in the back by MacDonald.

Julie Roys tweeted about this. Read the last sentence.

Folks, no matter what you thing about the ethics of a journalist accepting a car from a potential subject, we should be glad that Stetzer confirmed that this whole thing happened. This means that everybody who ever got a gift from MacDonald needs to consider that the gift was paid for by the church. I will get back to that statement in a minute with another example.

James MacDonald was no friend of Stetzer and I have proof. Let’s go back to the audio from Mancow’s show I posted {Updated}The James MacDonald Audio From the Mancow Show: What’s MacDonald Like Behind the Scenes?

Look at what MacDonald said about Stetzer and Christianity Today. Not only does he insult Stetzer, he insults Mark Galli, his boss. He then discussed how he was going to influence Stetzer for his own benefit. Also, it raises a question. Did Ed Stetzer use his influence to get CT to do that ridiculous Op-Ed by MacDonald? Folks, Ed Stetzer was had.

Was Christianity Today used/influenced by MacDonald and the rest? I am waiting for an answer and will post one if I get it.

We now know that Christianity Today allowed MacDonald to write this ridiculous Op Ed. Be ashamed, editors. James MacDonald: Why Suing Is Sometimes the Biblical Choice

From this point forward, many, including myself, will wonder if CT was unduly influenced by MacDonald. Does this happen frequently? I don’t know.

Today, I called Christianity Today for a comment. I also asked what their ethics code is. Can journalists accept gifts? My husband often says that the church andparachurch often appear to have lower standards than secular counterparts. I hope that isn’t the case here. I am a long time (decades) subscriber to CT.

What did the HBC leadership know about misdirected funds and when did they know it?

I have some bad news for those dear people who are giving money to Harvest Bible Chapel. Something is seriously amiss beyond James MacDonald’s “lets go shoot bears” trips paid for by HBC. Carefully read this part of the statement from Ed Stetzer again.

Take a minute and think about what Stetzer just told us…

He *reached out* to HBC and asked about the source of the funds that purchased his vintage VW Beetle convertible. Shockingly…the *guy at Harvest* told him that the VW Beetle was paid for by Walk in the Word funds!

Imagine how that convo went…

Stetzer: “Hey *guy at Harvest,* did James MacDonald pay for my VW Beetle out of his pocket?”

“Guy at Harvest”: “No, Ed. I have it right here in my little black book. James said to have money from WITW diverted for your tricked out ride.”

Who has that book and who has the ability to get that information??? Holy Moly!

There is somebody at HBC who obviously has the dirt on James MacDonald’s purchases for his BFFs. 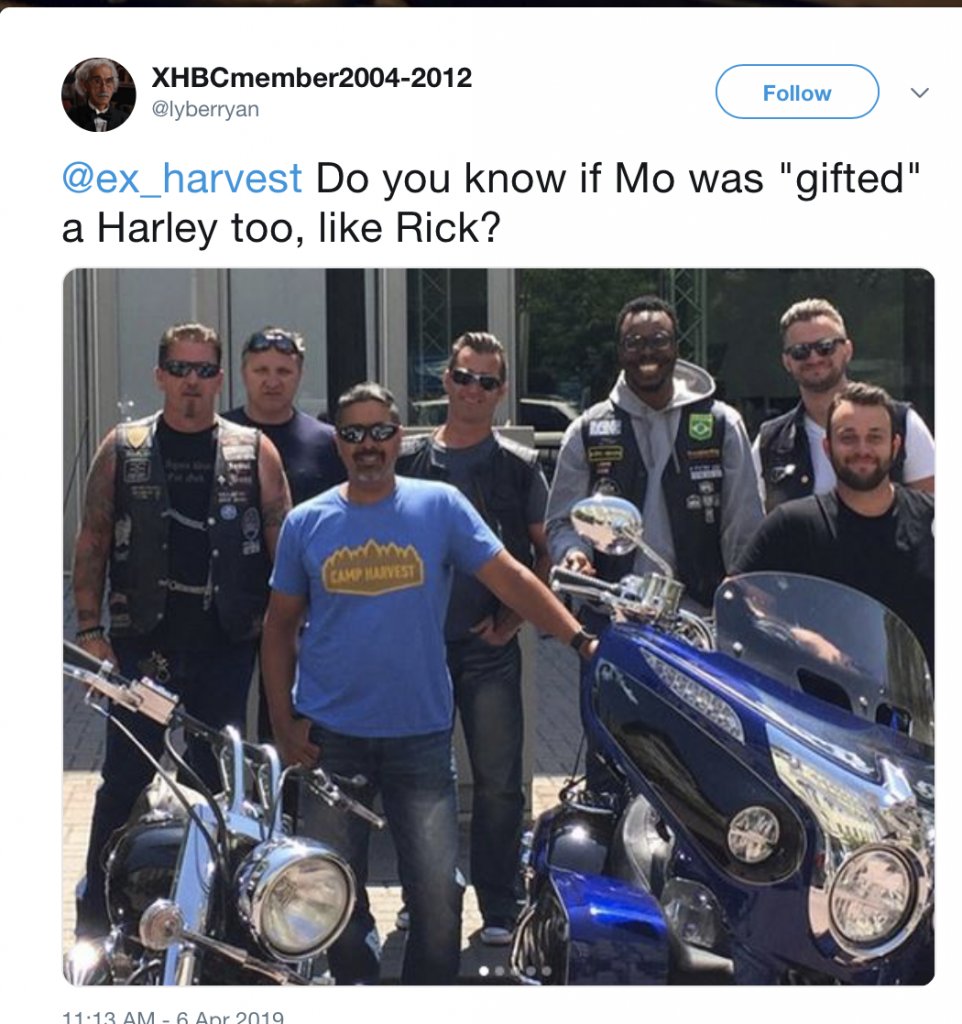 It was not a one time occurrence that the *guy at Harvest* gave out info. I was told that at least 4 church leaders got expensive motorcycles given to them-wither partially paid for or totally paid for.

I only had the time to call Pastor Mohan Zachariah.

Thank you for calling me about this.

Here is the statement you can use about it:

When James purchased a motorcycle for me in 2017, I was thankful, but didn’t think it unusual as I was aware of his gift giving to others.  I believed it was a gift from him.  After learning that the gift was not paid for directly by James, I made a donation to the church for that amount and put the bike up for sale.

Harvest Bible Chapel members would ask for a full, forensic audit by an independent outside agency.

Folks, did you think church money would be used by James MacDonald to give expensive gifts to his friends or those he wished to influence? Can any of you think of better recipients of this money? One alleged recipient of MacDonald’s largesse allegedly lives in an $800,000+ home.

I have many more people to contact in the coming weeks. If any of you received expensive gifts from James MacDonald, it’s time to get proactive and call the *guy at Harvest* who has the book on these gifts.Imagine what would happen if this information gets released to the public?

The church must answer the questions. “How many gifts did James MacDonald give on the church’s dime? ” It could be a lot…

So, the *guy at Harvest* knew about this as well. So, who is this guy?

Is there a coverup occurring at HBC? Did the *guy at Harvest* report his black book of expensive gifts given by MacDonald to those in charge? Or did those in charge all get gifts?

Is this why Harvest Theologian in Residence Michael Vanlaningham gave his not so theologically based sermon as reported by Julie Roys in The Lawsuit, The Sermon, The Selection of Elders: An Update On The Disappointing Developments at Harvest

How much does a theologian in residence get paid? Do they also get a residence? Whose paying for this gig? Did he get a car or motorcycle?

It seems like Vanlaningham does not want you to listen to social media. I don’t blame him. He needs to make sure the money flow continues so he can remain *in residence.* Apparently he does not understand the definition of slander. Maybe they don’t teach that in theology classes. Slander is the deliberate and knowing telling of a lie in order to bring harm to another. I have news for you. There is no lying going on here. Read what I wrote.The misuse of money is not gossip. It’s called fraud in many circles and sometimes it can even be a crime.

Now I just want to suggest, “I promise I will not bring up this incident” and “I promise I will not talk to others about this incident”—that rules out social media. Listen up! Social media has become social mania. Blogging has become flogging. Tweeting is now beating. And Christians are doing that against Christians! If somebody does you wrong, you don’t go home and post about it on Facebook for your 1,000 friends so it’s out there forever guys. It’s just wrong. That’s sin. It’s called slander. It’s called gossip. It’s called something we ought never to do to one another in the body of Christ. And, oh my goodness, how we’ve gotten out of control with that stuff! We have to learn to forgive.

As for forgiving, that will occur when the full truth has been revealed. Right now, it appears there are still lots and lots of dirty, little secrets.

Todd Wilhelm@ThouArtTheMan
To be clear, 4 months after Valdez registered as a sex offender in TX, and was sentenced to 20 years probation (2 X 10 run concurrently) Thomas White allowed him to enroll at SWBTS!
@reachjulieroys @JulieLMoore18 @wartwatch @BrentDetwiler @mmmirele https://t.co/YmzmH8IaE3
5
32