Mark Driscoll teams up with Charisma and authors “Spirit-Filled Jesus”. So now he professes to be an authority on the Holy Spirit? 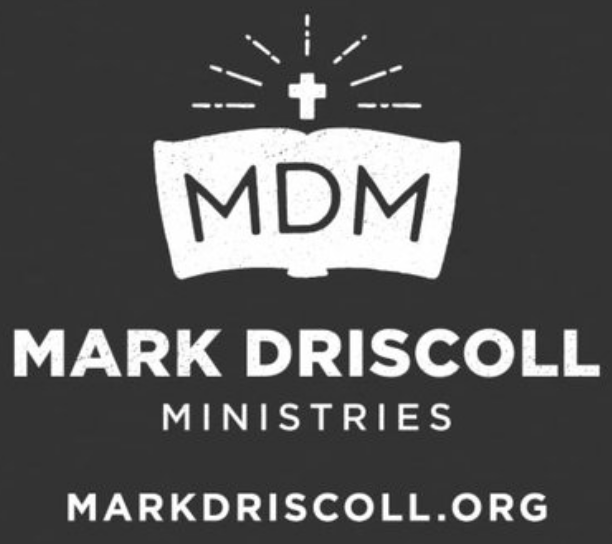 What a difference a decade makes! During the summer of 2008, Dee and I began to realize that something was amiss in Christendom. We were just beginning to discover the power of the internet as a research tool. And through MANY hours of investigation, we discovered the New Calvinism movement and its key leaders.

One of those was Mark Driscoll, the founding pastor of a Seattle megachurch called Mars Hill. Everyone in the Neo-Cal movement knew about Driscoll. He was the co-founder of a church planting network called Acts 29, a founding council member of The Gospel Coalition, and a much sought after speaker at Calvinista conferences.

Even though Mark Driscoll used highly inappropriate language and over-sexualized his Biblical interpretations, among other problems, he was adored by the Neo-Cal crowd. We began expressing our concerns about Driscoll just a month after launching TWW.

Nearly four years ago, Mark Driscoll came under fire at Mars Hill, as 21 pastors at the church brought charges against him. As an investigation got underway, he stepped down. A couple months later, Driscoll resigned as lead pastor of the church he began 20 years earlier.

If you care to read about all of the problems with Driscoll, the Wikipedia article on him does a good job of explaining what happened.

The demise of Mars Hill came quickly, with Mark and Grace Driscoll relocating to Arizona. In August 2016, Driscoll became Senior Pastor of The Trinity Church in Scottsdale, where he continues to serve. Then in October 2017, he moved his blog over to Patheos.

As you can see, Mark Driscoll is methodically re-building his image and ministry. Now he’s getting back into the speaking circuit; however, he’s ditched the Neo-Cal crowd (that once worshipped and adored him) and has now embraced the Charisma crowd. Here is the preview for a conference at which Driscoll spoke a few weeks ago.

Now that Macho Mark is sharing the stage with so many female speakers, we have to wonder whether he’s been chickified. Remember this video posted over at Desiring God?

In case you have any interest in listening to Mark’s 25-minute talk at the Charisma Conference, here it is.

And Driscoll is getting back into writing again, with a new book coming out soon.

Here are Mark and Grace Driscoll discussing Spirit-Filled Jesus. Will there be any charges of plagiarism this time?

One thing Mark has always been is bold! Here he is asking for $$$ via Twitter. 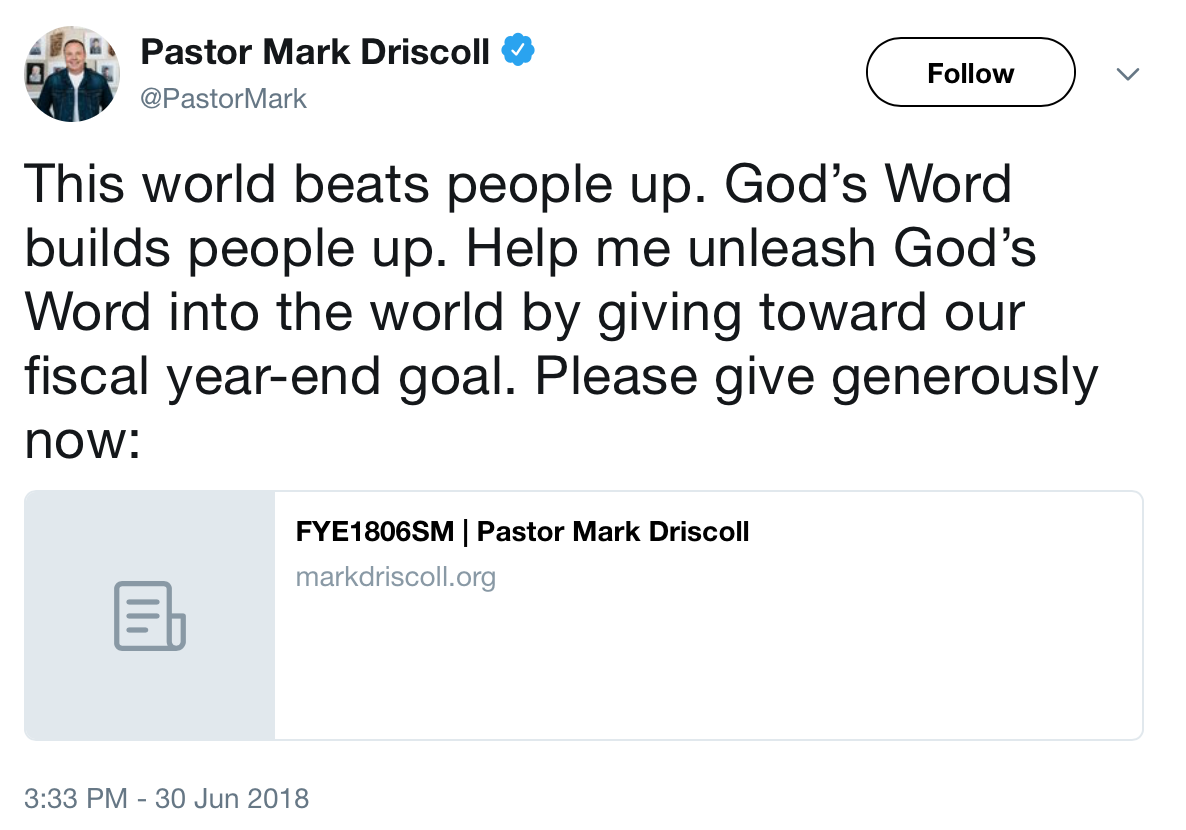 However, what we found most shocking about ‘the new and improved?’ Mark Driscoll is his forgiveness challenge. Warren Throckmorton, who was mysteriously booted from Patheos a few months ago, just called attention to it. Warren wrote:

No, this isn’t the Babylon Bee

With the help of Charisma Media, Mark Driscoll has launched the Mark Driscoll Forgiveness Challenge. Apparently if you give Charisma your email, they will send you an e-book and a bunch of stuff.

Take a look at the information at Driscoll’s website – the4forgivenesschallenge.com (see screen shots below) 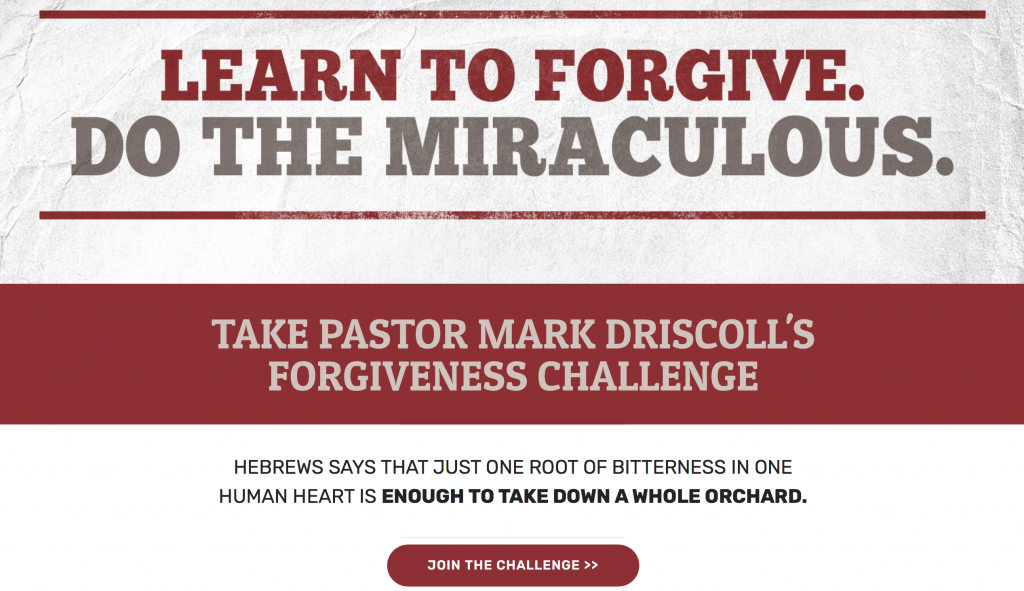 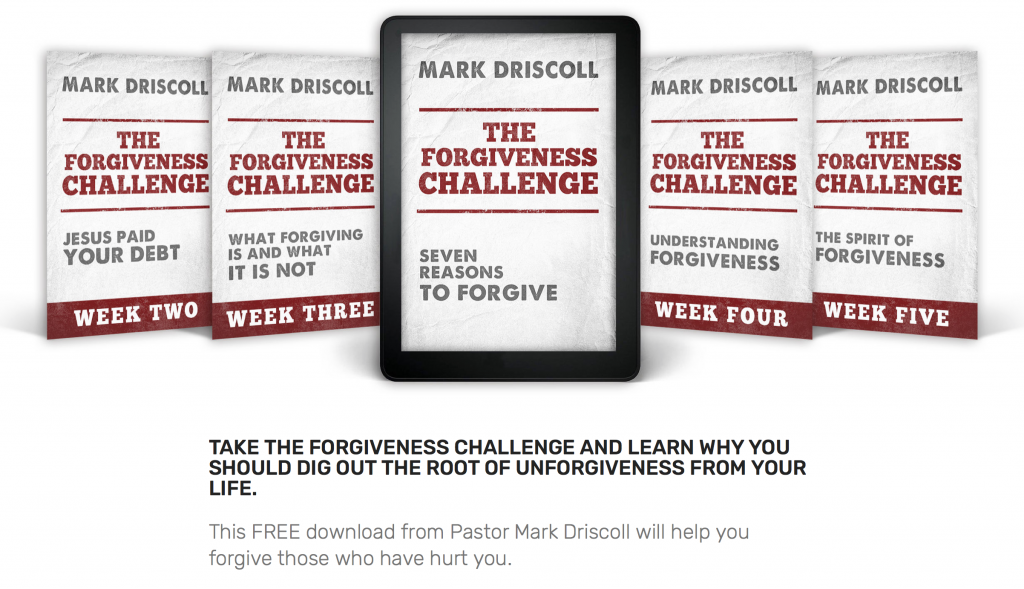 And here is Driscoll’s biographical information at his 4givenesss website:

Warren Throckmorton brilliantly ends his post with the following:

Notice anything missing? Look for it. There is a gap in the employment history from 1996 until the end of 2014. What was he doing then? How can you promote a forgiveness challenge when you can’t even mention the main reason you might have some issues to forgive or to be forgiven for?

Perhaps some things are better forgotten than forgiven. Now that’s a challenge.

Amen, Warren!!! Has Mark Driscoll ever gone to those whom he hurt and asked for their forgiveness? Here are three videos that provide a glimpse into Driscoll’s dictatorial rule at Mars Hill Church. We can think of two former elders whom we believe deserve an apology.