" There goes the neighborhood…" 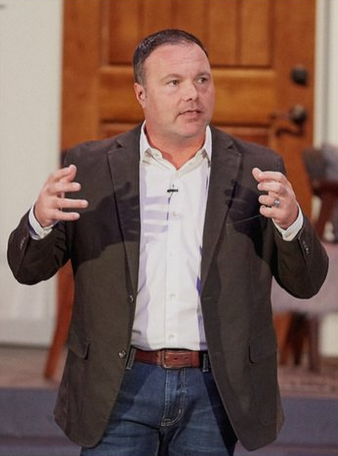 Have you heard the S-H-O-C-K-I-N-G news? Patheos has joined forces with Mark Driscoll and is now hosting his blog. Here are Mark and Grace Driscoll sharing the news on the Patheos Evangelical Facebook page.

According to the video, Mark Driscoll has also joined forces with Beliefnet [see our update at the end of the post (ed. 9/5/17)]

Patheos is providing a platform for everything published on Mark Driscoll's blog going all the way back to December 2014. Here is oldest post – his 2014 Merry Christmas post.

As you can probably imagine, not everyone who blogs over at Patheos is pleased with this decision. Our friend Warren Throckmorton chimed in on Monday. We LOVED this statement from Warren's post:

Throckmorton presumes that Mark Driscoll also announced the news on Twitter, but he can't be certain since he was blocked by Driscoll several years ago (when he was writing about Mark and his former church Mars Hill [which no longer exists!] )

Another Patheos blogger, Jonathan Aigner (link to bio), published an excellent post yesterday entitled There Goes the Neighborhood: What I Think About Mark Driscoll's Move to Patheos. We wholeheartedly agree with what Jonathan wrote (see screen shot below). 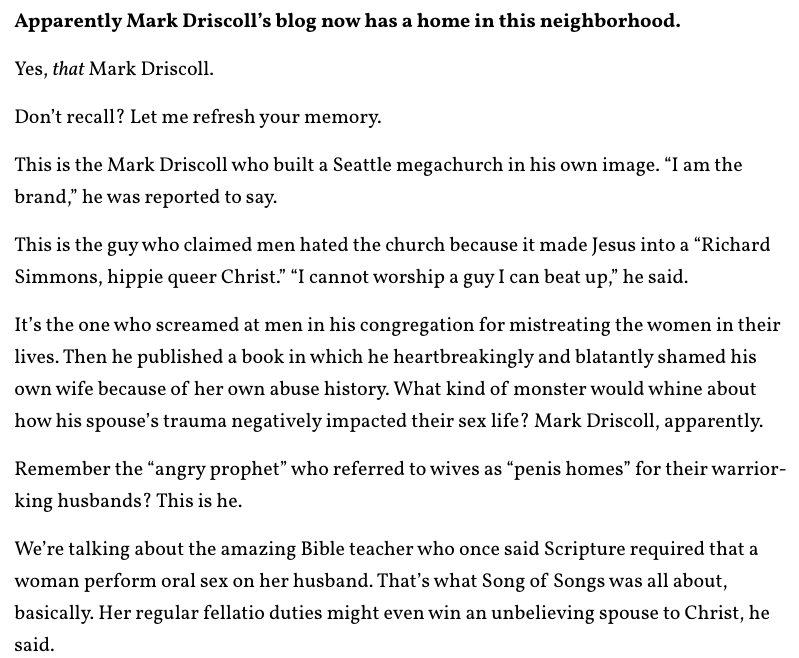 And we absolutely LOVE what John Mark N. Reynolds, another Patheos blogger, had to say in his post A Socratic Welcome to Mark Driscoll (see screen shot below): 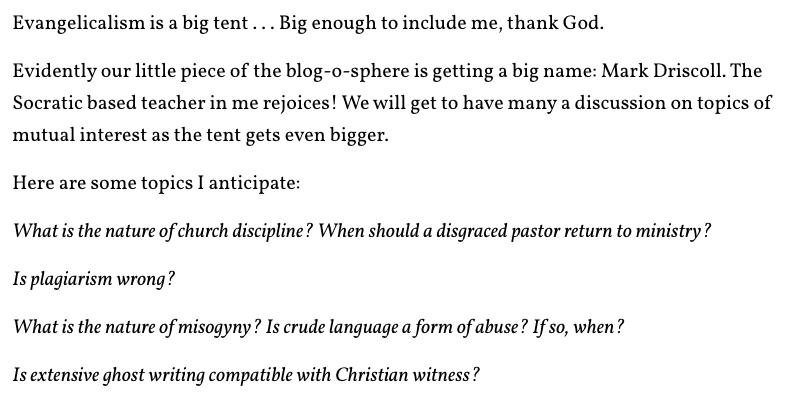 We have covered ALL of these topics in previous TWW posts (in case you're interested you can just search "Mark Driscoll" on our blog). 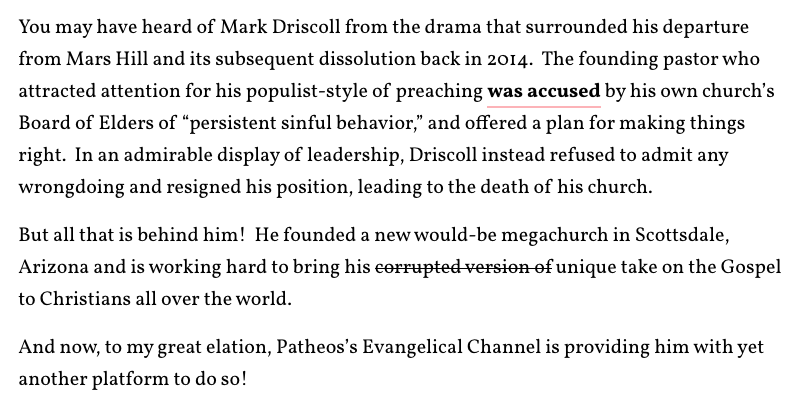 Please take the time to read the rest of Christian Chiakulas' post. He definitely hits the nail on the head!

Needless-to-say, the decision by Patheos to provide a platform for Mark Driscoll's blog has gotten A LOT of negative feedback. Commenters are chiming in as well, and one can only imagine what PO$$E$$ED Patheos to bring Driscoll into the fold.

Blogger Christopher Stroop has decided to provide direct feedback to Patheos through social media in a post entitled Patheos Is Giving a Platform to Disgraced Pastor Mark Driscoll. Pushback – Tweet #NoDriscoll at @Patheos.

Here is what Chris Stroop has proposed:

The folks at Patheos apparently decided that hosting Mark Driscoll would be a good idea. And so this morning, I suggested that we take to Twitter to tell them why it is not, and that we request that they cancel this very poor decision. If you’re on board, tweet #NoDriscoll at @Patheos, preferably with your reasons why you don’t think this toxic, extremely privileged white man deserves such an easy path to public redemption.

Remember that 1970s jingle "Let your fingers do the walking (through the yellow pages)"? (link) Well, some of us old timers remember it. 🙂 If you click on the link, that gadget they are using is a rotary phone. 😉

Amazingly, in the 21st century we can let our fingers do the talking through social media (blogs, Facebook posts, and Tweets). For those so inclined, have at it!!!

Thanks to one of our astute commenters named 'Tree', we are able to fit together the puzzle pieces in this story.

On April 23, 2013, beliefnet.com revealed its new partnership with Patheos:

Beliefnet Partnering with Patheos to Expand Its Advertising Network

NORFOLK, VA, April 29, 2013 – Beliefnet, a property of BN Media, LLC, announced today that it has entered into a strategic partnership with Patheos.com, a premier online destination engaging visitors in a global dialogue about religion and spirituality, through which Beliefnet is now offering Patheos.com’s advertising inventory to its extensive community. With over 8 million unique visitors, 32 million pageviews each month combined, and both ranked as top 10 Faith and Spirituality websites by comScore, Beliefnet and Patheos are two leading organizations in the growing faith, inspiration and spirituality space. The decision is a win-win for both organizations and a benefit to advertisers targeting the steadily growing faith and spirituality-based communities worldwide.

Then a year ago, BeliefNet made the following announcement: (see screen shot below)

So there you have it folks. Beliefnet's goal in acquiring Patheos is to boost page views and reach more unique visitors. In other words, it's all about the almighty dollar.

Warren Throckmorton's recent post indicates that you can't teach an old dog new tricks. Check it out below.