“Listen carefully Southern Baptists. Please, do not be tone deaf on this issue. If Dr. Paige Patterson is allowed to continue in leadership within the Southern Baptist Convention, Southern Baptists will lose any remaining credibility we possess as we share the Good News with the world at large.”

It’s been almost two decades since my family joined a Southern Baptist church. We had previously been attending a large church in a mainline denomination. My husband and I were raising two young daughters, and we were greatly concerned about their theological training. Our newly found Baptist church seemed to be the right place for them to be nurtured in the faith.

As it turned out, Paige and Dorothy Patterson were members of the church we joined. Dr. Patterson had a busy speaking schedule, so it was rare that he and his wife would be in attendance at their home church. I do recall him preaching one Mother’s Day at our church, and I went up to him at the end of the service, shook his hand, and explained that his friend and colleague Adrian Rogers had been a HUGE inspiration to me through his wonderful teaching.

A few years later we left that fellowship and got involved with a church plant from another Southern Baptist church in the area. The Pattersons also left North Carolina some years later when he became president of Southwestern Baptist Theological Seminary.

Looking back, I am terribly disappointed that Dr. Patterson made those callous remarks during the time that we were members of the same church. In an April 29 press release, he stated: 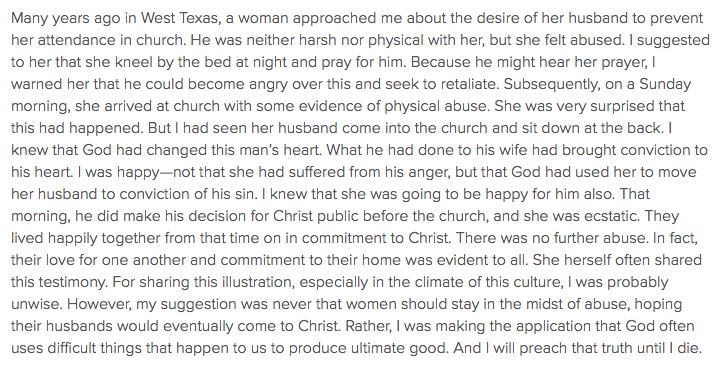 As Dee emphasized in a previous post, we expressed our outrage at Paige Patterson’s remarks as soon as we became aware of them. That was nearly a decade ago and not long after the launching o this blog. Perhaps it’s divine providence that the world is becoming aware of his remarks during the #metoo / #churchtoo movement. 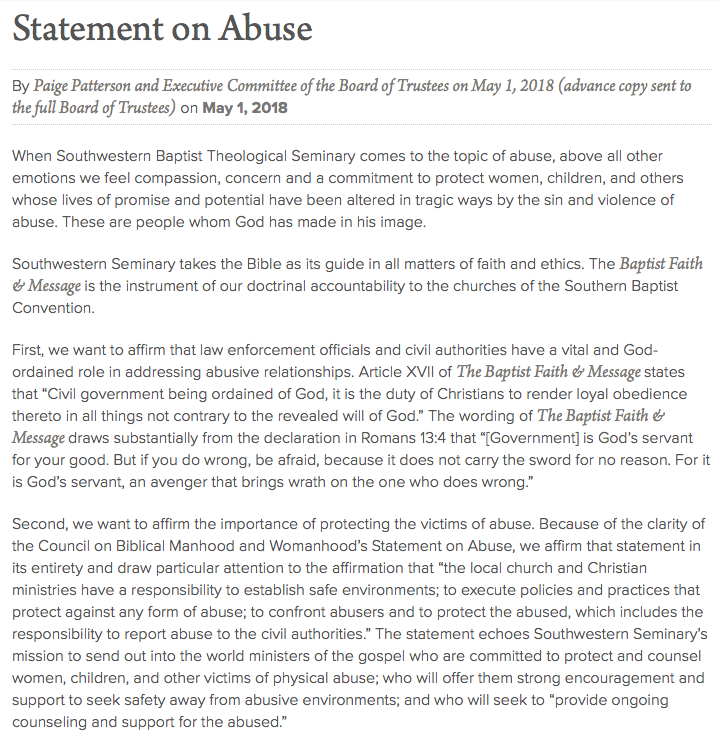 Dr. Patterson is slated to deliver an address next month at the Southern Baptist gathering in Texas. Now things appear to be in limbo. Will he remain SWBTS president for now?

Dr. Paige Patterson has created a firestorm in the media this past weekend over his public comments that an abused wife should stay in a physically abusive marriage. He said that a woman “who is undergoing genuine physical abuse from her husband, and her husband says she should submit” should do so. And he went on to say that the abused woman should:

“Pray at night beside her bed, quietly, for God to intervene.”

Don’t call the police. Don’t file for divorce. Don’t leave the abusive home. Pray. And if the abuse continues, “be happy” because God will hear her prayers and reach her husband through them and her quiet submission.

Twitter is ablaze with fury over what Dr. Patterson said.

Ironically, ten years ago I called out Dr. Patterson for these very remarks.

Nobody seemed to be paying attention then.

But in the days of #metoo and #churchtoo, people are much more keen to the issue of abuse. I’m not unfamiliar with the Southern Baptist Convention waiting ten years before correcting an error.

I like Dr. Paige Patterson. I have enjoyed dinner at his home. I have been the recipient of floral arrangements sent by Dr. and Mrs. Patterson (twice). I harbor no personal animosity toward Dr. Patterson or his family.

It’s time for Dr. Paige Patterson to step down from every leadership position he holds in the SBC.

Listen carefully Southern Baptists. Please, do not be tone deaf on this issue. If Dr. Paige Patterson is allowed to continue in leadership within the Southern Baptist Convention, Southern Baptists will lose any remaining credibility we possess as we share the Good News with the world at large.

Dr. Patterson must step down. He must resign. If he does not, he must be removed.

Here are the top ten reasons Paige Patterson should resign immediately – or be removed by others – from his positions of leadership in the Southern Baptist Convention:

1. Paige Patterson has counseled physically abused wives to stay in their marriages.

2. Paige Patterson fired the finest Hebrew professor in the SBC because she was a woman.

3. Paige Patterson rescinded a seminary job offer to a popular SWBTS vocalist because Patterson discovered the vocalist was married to a divorced woman who had left an abusive marriage.

4. Paige Patterson is currently a party in a sexual abuse lawsuit, along with Judge Paul Pressler, a lawsuit that will soon be going to trial in Texas.

5. Paige Patterson protected a sexual predator by refusing to report him to authorities.

6. During a public sermon in 2016, Paige Patterson made suggestive comments about a 16-year-old girl being “built.”

7.  It is possible that the Hebrew parchments purchased by the Pattersons for an unknown sum (e.g. in the millions of dollars) during a time of insitutional financial crisis, fragments that are now on display at the Southwestern Baptist Theological Seminary,  may actually be fakes.

8.  Violating the school charter and admission policies, Paige Patterson admitted a practicing Muslim into Southwestern Baptist Theological Seminary, displaying the belief that he is above accountablity and oversight.

9.  Last year’s full-time equivalent (FTE) student enrollment at Southwestern Baptist Theological Seminary was 1249, nearly half of the 2381 FTE’s during the final year of Dr. Ken Hemphill tenure at SWBTS. Ironically, one of the stated reasons for Dr. Hemphill being forced out was “declining enrollment.”

10.  Contrary to Southern Baptist polity and policy, Dr. Patterson is having a retirement home built for him on the grounds of Southwestern Seminary where he will be able to attend weekly chapels where his image is engraved in the stain glassed windows.

Ed Stetzer, executive director of the Billy Graham Center at Wheaton College and Billy Graham distinguished chair of church, mission, and evangelism, has also called for Patterson to go. Christianity Today featured his article entitled: Paige Patterson and Doing the Right Thing for the SBC, Again.

And Thom Ranier recently issued the following statement via Twitter. 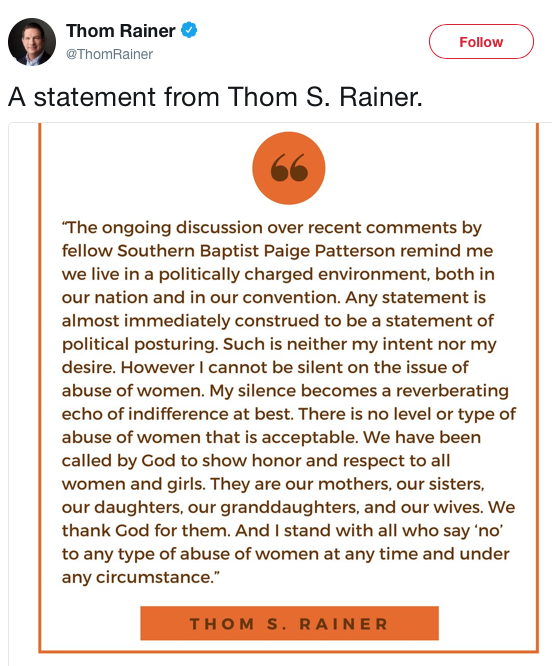 No doubt Patterson and the SWBTS Trustees, among others, are burning the midnight oil as they discuss what to do. We will do our best to provide timely updates here and via Twitter.