“The ultimate reality that I live with is that if my abuser had been Nathaniel Morales instead of Larry Nassar, if my enabler had been [an SGM pastor] instead of [MSU gymnastics coach] Kathie Klages, if the organization I was speaking out against was Sovereign Grace under the leadership of [Mahaney] instead of MSU under the leadership of Lou Anna Simon, I would not only not have evangelical support, I would be actively vilified and lied about by every single evangelical leader out there.” 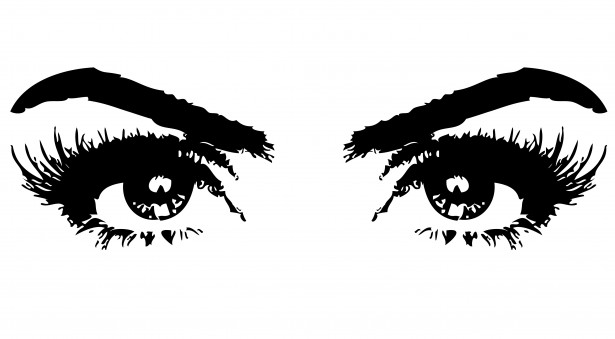 Eyes of a Woman

This is the story of Rachael Denhollander, the courageous young woman who dared to break her silence (after 16 years) by filing a police complaint against Larry Nassar. Rachael was the first one to do so on August 29, 2016.

Larry Nassar, the doctor who for decades worked with the U.S. Olympic women’s gymnastics teams, perpetrated the biggest sex abuse scandal in sports history. When Rachael was 15, she first encountered Larry Nassar. For nearly a year, he sexually abused her under the guise of ‘medical treatments’. In the video below, Rachael explains why she finally came forward.

Because of Rachael’s bravery, more than 260 women have now come forward to confront Larry Nassar. And, sadly, that number will undoubtedly increase.

Last week Judge Rosemarie Aquilina sentenced Nassar to 40 to 175 years in prison, stating: “I just signed your death warrant.” This was on top of the 60 years to which he had already been sentenced in federal prison on child pornography charges to which he’s admitted. It was during last week’s proceedings in Judge Aquilina’s courtroom (Ingham County, Michigan), that Rachael Denhollander addressed Nassar. The testimonies of Nassar’s victims drew international attention.

This week Nassar was again in court for a third and final time (Eaton County, Michigan), and once again Rachael gave her impact statement. Rachael “described her abuse and how the trauma and nightmares from it became intertwined in the joys of her life.” Nassar will be sentenced for the final time on Monday.

For more information on Rachael’s Denhollander’s efforts to seek justice against Nassar, we recommend an article that appeared in The Washington Post.

Then the New York Times featured an opinion piece by Rachael entitled The Price I Paid for Taking on Larry Nassar. In it she explains how her training as a lawyer prepared her for the process and presentation but that “nothing could have prepared her for the pain of being the first to go public” with her accusations against Nassar in The Indianapolis Star (published on September 12, 2016).

In the NYT piece, Rachael wrote the following: (see screen shot below)

Her remarks about losing her church and her closest friends immediately caught our attention. How could this happen to a brave Christian woman whose church family should be rallying behind her?

When we first began following Rachael’s story, we had no idea that she would one day speak out about a ‘family of churches’ with whom we are all too familiar. Morgan Lee of Christianity Today talked with Rachael, and her candid interview was just published on January 31. It is entitled: My Larry Nassar Testimony Went Viral. But There’s More to the Gospel Than Forgiveness. In the article, Rachael remarks that three weeks before she filed her police report on Larry Nassar, she “was left alone and isolated”.

In this CT interview…

Denhollander shared more details about her break with her church community, how poor theology causes many churches to poorly care for sex abuse victims, how she found God’s perspective on sexual abuse in Scripture, and about her convictions that forgiveness and justice are both biblical and must go hand in hand.

Rachael discusses her journey and eventual decision to file a police report about Nassar’s criminal behavior. Morgan Lee asks her about the following remark in her impact statement:

“My advocacy for sexual assault victims … cost me my church.”

Then Morgan asks Rachael this question:

Can you share about when you decided to share with your church that you were going to speak up about this and what happened?

Rachael’s answer to this query is so important that we have included it in its entirety below:

The reason I lost my church was not specifically because I spoke up. It was because we were advocating for other victims of sexual assault within the evangelical community, crimes which had been perpetrated by people in the church and whose abuse had been enabled, very clearly, by prominent leaders in the evangelical community. That is not a message that evangelical leaders want to hear, because it would cost to speak out about the community. It would cost to take a stand against these very prominent leaders, despite the fact that the situation we were dealing with is widely recognized as one of the worst, if not the worst, instances of evangelical cover-up of sexual abuse. Because I had taken that position, and because we were not in agreement with our church’s support of this organization and these leaders, it cost us dearly.

When I did come forward as an abuse victim, this part of my past was wielded like a weapon by some of the elders to further discredit my concern, essentially saying that I was imposing my own perspective or that my judgment was too clouded. One of them accused me of sitting around reading angry blog posts all day, which is not the way I do research. That’s never been the way I do research. But my status as a victim was used against my advocacy.

As the interview continues, Morgan asks Rachael whether her (former) church leaders believed she was biased due to her own abuse. Rachael answers in the affirmative and explains that she attempted to present ‘mountains of evidence’ regarding an institutional cover-up and that there was a ‘complete refusal to engage with the evidence”.

Here is the very next question in the interview, along with Rachael’s response.

Was this the Sovereign Grace Ministries (SGM) scandal?

[Editor’s note: Denhollander clarified that she and her husband did not attend a SGM church, but a Louisville, Kentucky, church “directly involved in restoring” former SGM president C. J. Mahaney. She said that she and her husband “left because we were told by individual elders that it wasn’t the place for us.” CT previously reported how Mahaney and SGM were accused of covering up abuse within the church network in a 2012 lawsuit; they denied the allegations and argued that courts shouldn’t second-guess pastoral counseling decisions. A judge dismissed the suit in 2014, though a former SGM youth leader was convicted of abusing three boys in a separate case.]

The ultimate reality that I live with is that if my abuser had been Nathaniel Morales instead of Larry Nassar, if my enabler had been [an SGM pastor] instead of [MSU gymnastics coach] Kathie Klages, if the organization I was speaking out against was Sovereign Grace under the leadership of [Mahaney] instead of MSU under the leadership of Lou Anna Simon, I would not only not have evangelical support, I would be actively vilified and lied about by every single evangelical leader out there. The only reason I am able to have the support of these leaders now is because I am speaking out against an organization not within their community. Had I been so unfortunate so as to have been victimized by someone in their community, someone in the Sovereign Grace network, I would not only not have their support, I would be massively shunned. That’s the reality.

Regarding the church that Rachael and her husband attended… Dee and I have been asked by Rachael’s husband not to divulge the name of their former church (which we figured out within a few short hours of Rachael’s initial testimony in court). For now we are willing to comply with their request; however, we cannot control what others might say in this forum.

We can share this about the lead pastor at their former church. This yet to be named church leader will be serving in a leadership role at the upcoming Together for the Gospel (T4G) conference…

There is so much more to say about all of this, and we look forward to sharing our thoughts next week.

We want to conclude with a status update written by Rachael’s husband last Spring. We concur that Jacob is married to a real, live, superhero! 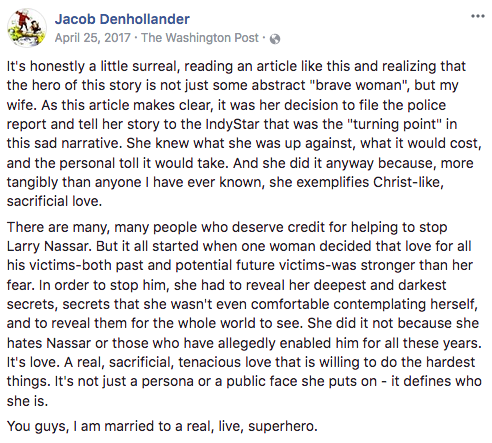