What did CLC pastor PJ Smyth know and when did he know it? 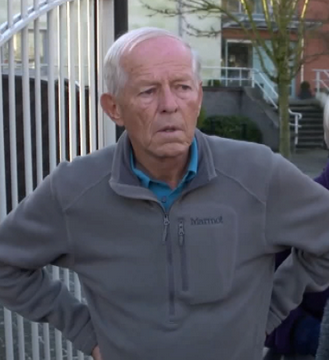 The world is getting smaller by the day! Late last week our friends in the UK sent us breaking news about John Smyth. More on him in a moment. If you know anything about Covenant Life Church (CLC) in Gaithersburg, Maryland (the church CJ Mahaney co-founded and pastored for 27 years), you may recognize the last name 'Smyth'. The pastor who succeeded Joshua Harris at CLC is PJ Smyth, son of John Smyth. Yes, it's a small world after all…

So who is John Smyth? According to The Sun (a UK news source):

John Smyth QC  was head of the Irwine [sic] Trust, a Christian charity closely linked to a church that ran summer camps in the late seventies.

The beatings, which took place in a shed in the garden of Mr Smyth’s Winchester home, were so intense that the victims were left with lasting scars.

Details of the alleged abuse did not come to light until 1982, when one boy attempted suicide after being ordered to submit himself to another beating.

The Iwerne Trust commissioned a report which concluded: “The scale and severity of the practice was horrific.”

But Smyth was was not reported to cops at the time.

He was instead allowed to move to South Africa after being asked never to work with children again.

We are grateful to the various UK news outlets who are spotlighting this awful story. Our friend Todd Wilhelm has put together an informative post about these developments as well as P.J. Smyth's response to the allegations against his father, and Todd has given us permission to share it with our readers.

We will be following this story closely and will bring you any updates.

Unfortunately, I have not been able to embed several of the videos in Todd's post, so you will have to go over to his blog to view them.

Covenant Life Church Sure Knows How to Pick'em (link) 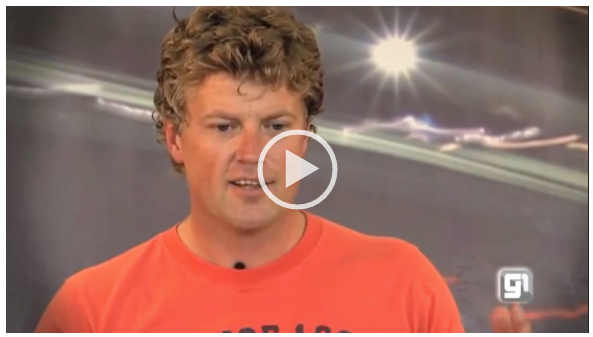 Breaking: It is currently 2130 local time in Dubai, February 3, 2017. PJ Smyth has just released a video which can be viewed immediately below. PJ Smyth’s statement is not good news for Covenant Life Church.  It is my opinion that he comes across as a deceptive man with something to hide. CLC has a storied history of former senior pastors who have been deceptive with church members, unfortunately, it looks like they can add another one to the list.

For starters, PJ refers to his father’s abuse as “excessive discipline.” But the bigger deception is in what PJ did not say. You will notice that he talked only of his father’s alleged abuse while living in the UK decades ago.

Long, long ago and far, far away.

It all occurred when PJ was a young boy.  He only heard vague rumors of his father’s behavior.  End of story.  Nothing to see here, now move along.

What about those years in between the time you and dear old dad lived in the UK and SA?  I believe your dad packed up and took the family to Zimbabwe in 1984, where he then worked for 17 years. By my calculations that would mean your dad left Zimbabwe for SA in 2001. You would have been 30 years-old!  While in Zimbabwe your dad was charged with the culpable homicide of 16-year-old Guide Nyachuru at one of the Zambesi Ministries’ summer camps held in Marondera in December 1992. (Link)  He managed to dodge those charges and fled to SA. (Link)  Any recollections of those years PJ?  You’re a clever man, surely you don’t expect us to believe that when you were 21 years old you had no knowledge of the charges of homicide against your father, do you?

PJ has some explaining to do.  My bet is the corrupt leaders at CLC who rallied around CJ Mahaney and Joshua Harris to cover up the sexual abuse of children happening in their church will continue their corrupt ways and attempt to provide cover for PJ Smyth.  It is time for the good members of CLC to rise up and demand the truth from their leaders, and then demand the resignation of corrupt leaders. 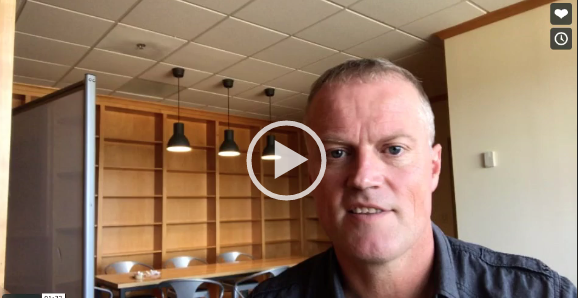 PJ Smyth’s deceptive video makes no mention of his father’s abuse in Zimbabwe. (To view this video, click here) 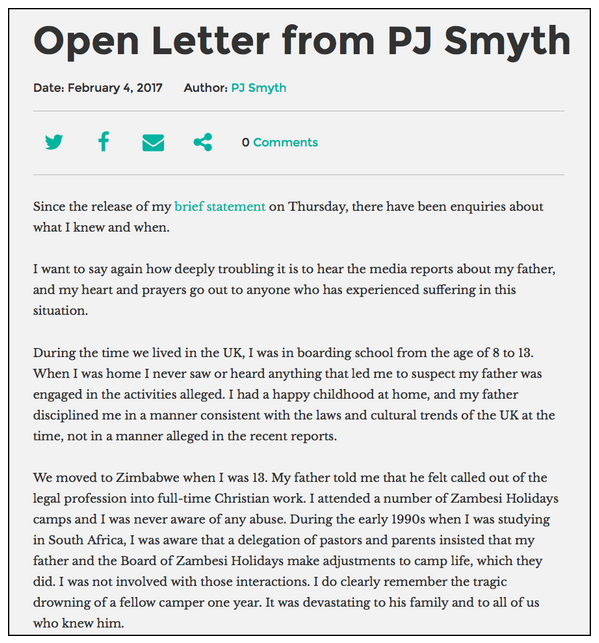 My submitted response which is not likely to make it out of moderation. 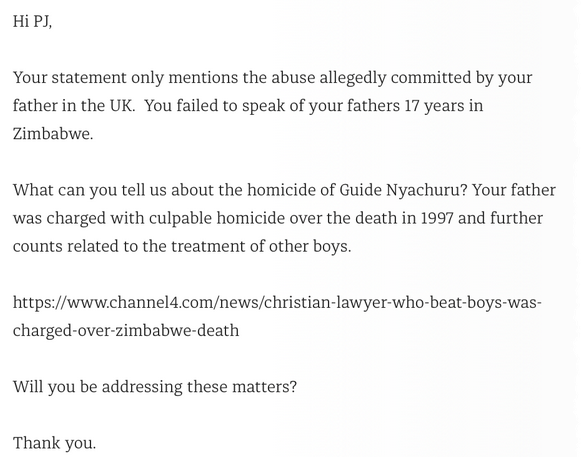 Breaking: February 4, 2017. PJ Smyth has published a second statement on the Covenant Life Church website. (Link)  In the statement below I again must point out what was not said. PJ states that “I do clearly remember the tragic drowning of a fellow camper.” No mention is made that his dad was arrested and charged with the culpable homicide of 16-year-old Guide Nyachuru, PJ’s “fellow camper.”  Perhaps PJ does not have as clear a recollection of that minor detail. Allow me to refresh PJ’s memory:

“While in Zimbabwe Smyth ran a Christian mission, Zambesi Ministries, for 17 years. He was charged with the culpable homicide of 16-year-old Guide Nyachuru at one of the Zambesi Ministries’ summer camps held in Marondera in December 1992. Nyachuru’s naked body was found in the Ruzawi School pool — questions still hang over the circumstances surrounding his drowning. Smyth has always maintained it was a tragic accident.

Smyth was also charged with five counts of crimen injuria relating to incidents during a camp in April 1993 involving five boys from posh Zimbabwean schools.

The culpable homicide prosecution was discontinued when the then Zimbabwean Chief Justice, Anthony Gubbay, ruled the prosecutor in the case had a conflict of interest. Smyth moved to South Africa soon afterwards in 2001.” (Link)

“In 1997 Smyth was arrested over claims that he had killed a teenage boy, 16-year-old Guide Nyachuru.” (Link)

“Rocky Leanders, who was 15 when he attended a camp in Africa, said Smyth encouraged the boys to swim naked with him.

Leanders alleged that Smyth beat boys with table tennis bats, sometimes hitting them so hard that he broke the bats.

His mother saw the bruises, and contacted a lawyer, who identified more alleged victims.

It emerged that 16-year-old Guide Nyachuru had been found dead in a swimming pool while on a Zambesi holiday in 1992.

His sister Edith, who now lives in Britain, said that the boy was naked when she went to identify his body.” (Link)

“Edith Nyachuru, whose brother died at one of Mr Smyth’s camps, say he would still be alive had the barrister faced justice in the UK.” (Link) 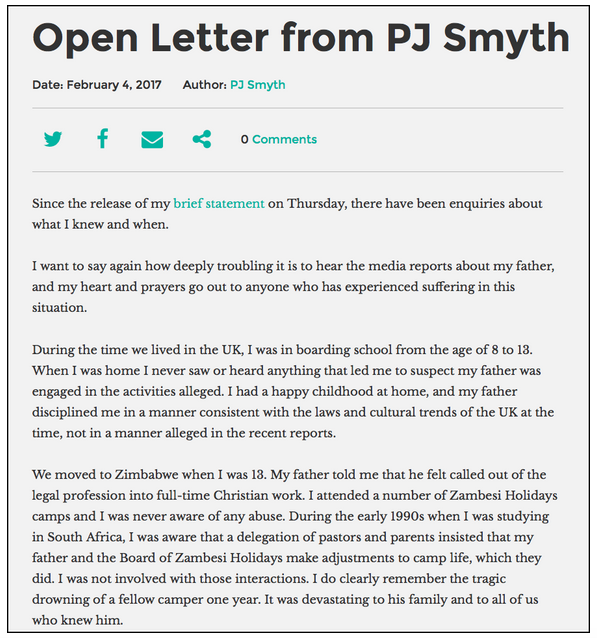 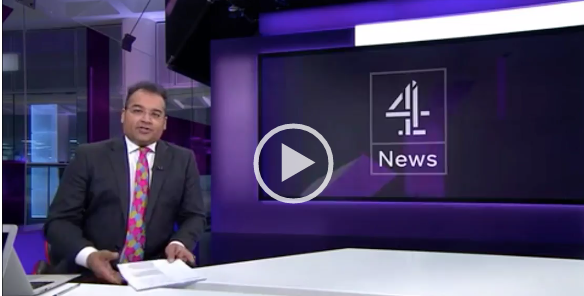 Covenant Life Church in Gaithersburg, MD sure knows how to pick a winner. CLC, formerly the flagship church of the Sovereign Grace denomination, has been embroiled in a sexual abuse scandal that some say was the largest to hit the Evangelical Church in America. Former senior pastors C.J. Mahaney and Joshua Harris, along with assistant pastor (and brother-in-law of C.J. Mahaney) Grant Layman resigned from the church. Youth leader, Nate Morales was convicted of sexually abusing boys and sentenced to 40 years in prison. Hundreds of disenchanted church members quit.

Covenant Life Church, seeking a fresh beginning, left the Sovereign Grace denomination and began a world-wide search for a new pastor.  The man CLC leaders (the same leaders complicit in the coverup of abuse) selected to lead them out of the morass of sexual abuse and coverup and restore them to a position of respectability was PJ Smyth. While a relative unknown in the USA, PJ was a superstar in South Africa, much like CJ used to be in the USA.  Convinced they had found their next Christian celebrity, CLC leaders had an easy time of convincing the Kool-Aid swilling members who had remained loyal to the church that PJ was their man. The members reportedly voted overwhelmingly (97% in favor) of hiring PJ. One year later, in January of 2017, PJ and his family arrived in the USA. 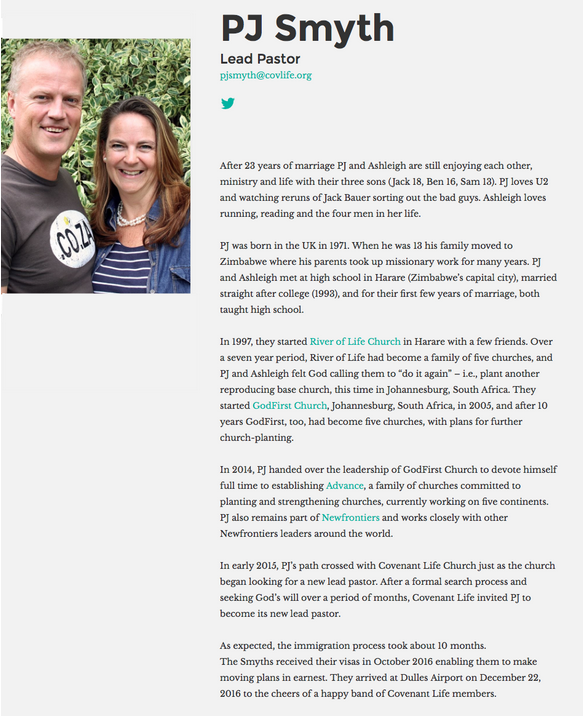 All appeared well in CLC-land. PJ was in charge and ready to make everyone forget CJ and lead CLC to new heights of fame and fortune. Who could have known that within one month of PJ’s arrival CLC leaders would once again be indirectly rocked by more charges of abuse?

Yesterday news broke in the UK and South Africa that John Smyth, father of PJ Smyth, is a monster. He is charged with the most horrific abuse of young men, dating back to the 1970’s! 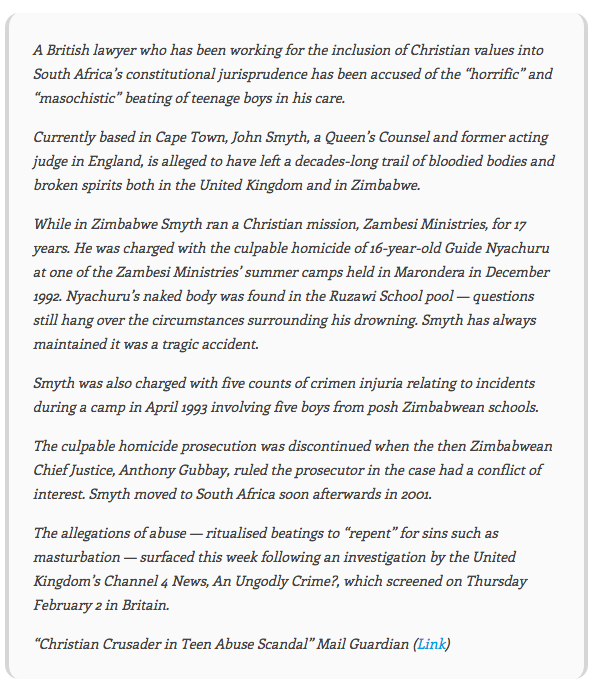 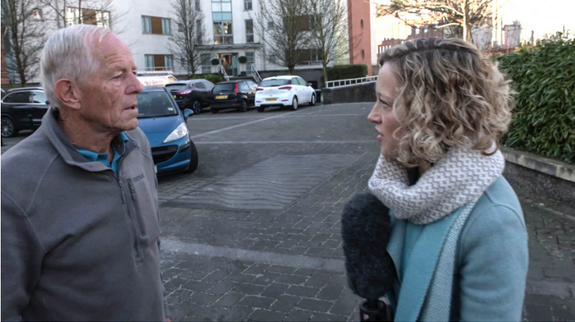 John Smyth is questioned by reporter Cathy Newman regarding allegations of horrific abuse of boys. Smyth is the father of PJ Smyth, senior pastor of Covenant Life Church. (Link to video) 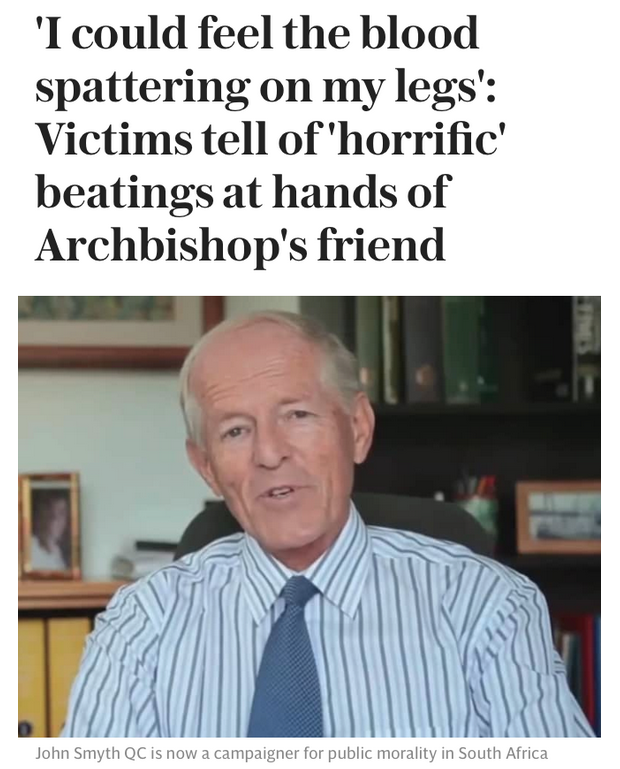 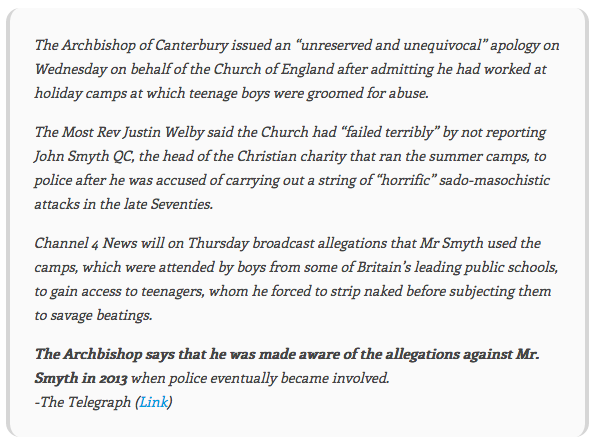 While one cannot place the blame for the sins of the father on the son, it would be reasonable to believe that PJ Smyth had to have knowledge of his father’s sinister life.  The Archbishop of Canterbury became aware of allegations in 2013. When did PJ Smyth become aware that his father was beating young men?  Did PJ report any of these brutal beatings to police?  Was PJ Smyth ever beaten by his father? Assuming PJ Smyth was aware of what his father was engaged in, did he advise CLC leaders of the potential fall-out from his father’s evil deeds?

It would appear CLC leaders did not exercise due diligence prior to hiring PJ Smith. CLC leaders have repeatedly demonstrated that they are sorely lacking any discernment. In my opinion, these leaders need to resign. One also wonders if church members will divest themselves of the notion that only a celebrity can lead their church? The whole culture at CLC seems, to this outsider, to be sick. Perhaps the healthiest thing CLC could do would be to close shop.

It would also be interesting to know whether PJ Smyth was truthful with US Immigration officials in his visa interview.

Below is a video in which Mark Mitchell recounts the thorough vetting procedure they put PJ Smyth through prior to offering him the job of senior pastor. Correct me if I’m wrong, but it sounds to me as if the CLC pastors had determined the job was PJ’s prior to the Search Committee even beginning their work! 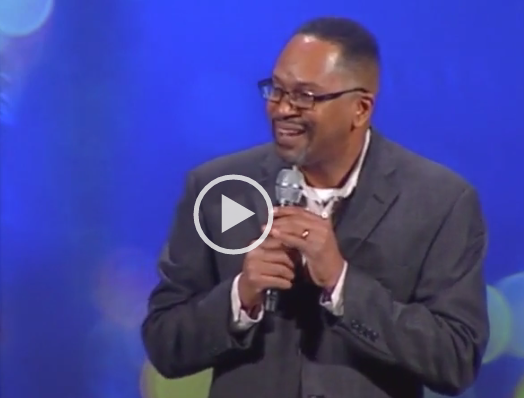 A little refresher course on problems CLC leaders would like you to believe are in their past: