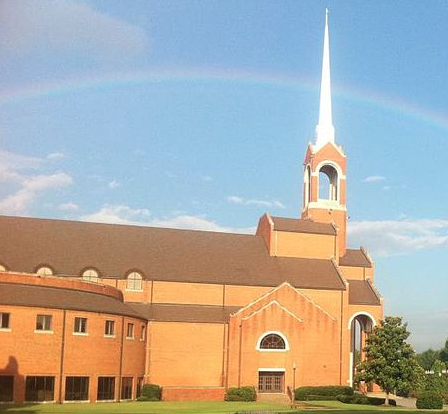 Briarwood Presbyterian Church, located in Birmingham, Alabama, wants its own police department, according to a report by the local ABC affiliate (see screen shot below). 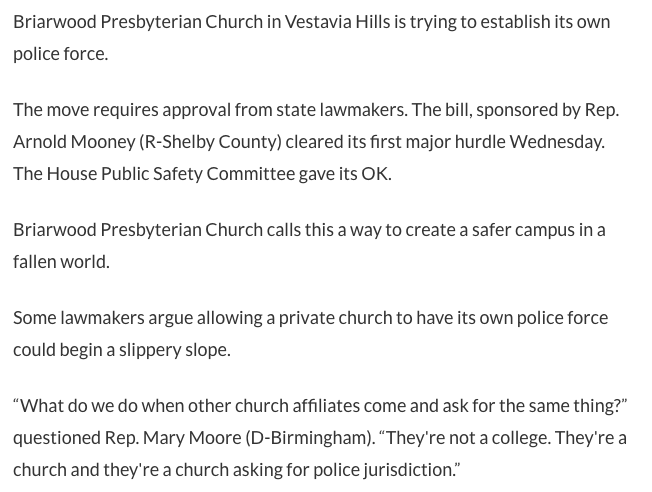 Another news source – al.com – reported on this development yesterday. Here is how the article begins:

Briarwood Presbyterian Church and Briarwood Christian School want their own police department and a bill proposing it passed 9-2 in the House Public Safety Committee on Thursday, Briarwood's attorney said.

The same bill passed last year but got to the governor late and never received a signature, said attorney Eric Johnston, who drafted the bill for the church.

As the above excerpt indicates, Alabama lawmakers previously passed a bill allowing Briarwood Presbyterian to establish its own police department. WIAT, the local CBS affiliate filed this report:

This WIAT news report aired in August 2015. Governor Robert Bentley did not sign the passed bill into law. Anyone have the scoop on why the governor did not add his John Hancock?

One and a half years later, Briarwood is making another attempt to have lawmakers make it legal for them to create their own police department.

Johnston said he expects the bill to again pass both the House and Senate and believes Gov. Robert Bentley will sign it into law.

Some critics of the bill have questioned why the church and school need a police department, but it's essentially a way of hiring a police officer full-time, as opposed to relying on off-duty police officers to assist the church, Johnston said.

"We've got over 3,000 events a year that take place at Briarwood – going on all day, all night, at the school, at the church, at the seminary," Johnston said. "We have to hire policemen all the time. It would be so much easier to have someone on staff."

According to this source, the bill proposed in 2015 was in response to the church shooting in Charleston.

A representative from Briarwood Presbyterian told the local ABC affiliate that the officers would answer to the leadership section of the church. The ABC affiliate further reported that Representative Connie Rowe (R-Jasper), a former police chief, supports Briarwood's establishment of its own force. Finally, that ABC report stated:

Rowe says she would also consider requests from other churches to do the same.

England is concerned about transparency.

In our almost eight years of blogging, we have reported on an incredibly large number of cover-ups by churches that failed to notify authorities about alleged criminal activities involving church members. Should Alabama lawmakers and the governor approve Briarwood's request to create its own police department, would this become a precedent for other churches? If so, we believe there will be dire consequences.

We are absolutely stunned that Briarwood Presbyterian Church having its own police force may soon become a reality.

Perhaps this church name rings a bell for you, as it has for us. To learn about Briarwood Presbyterian, you can consult the Wiki article where you will be reminded that it was this church that established Campus Outreach. Also, the church website provides background information on Campus Outreach. I (Deb) first became concerned about Campus Outreach when I discovered that some CO college ministries have a rule where participants must get approval from their leaders to date someone. It appears these leaders are micro-managing the lives of the students who become involved with Campus Outreach.

We will continue to follow this story and bring you any updates. What are your thoughts regarding churches having their own police force?