“Childhood should be carefree, playing in the sun; not living a nightmare in the darkness of the soul.”― Dave Pelzer, A Child Called “It” link 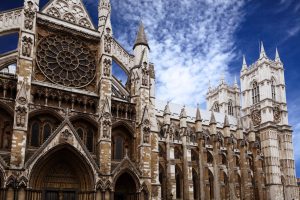 On Monday, I was in Washington DC at a meeting with a couple of members of the Episcopal hierarchy and Eric Bonetti. I am not at liberty to discuss what was discussed at this time. However, reconciliation between Eric Bonetti and involved parties, including his priest, is progressing. Eric has been heard and understood. I hope to be able to write a post about this soon because I think evangelicals can learn quite a bit about how to handle conflict from our Episcopal brothers and sisters.

I did alert that folks present at the meeting that PJ Smyth is the pastor of Covenant Life Church in Gaithersburg, Maryland just in case the Archbishop of Canterbury might be interested. (Talk about timing!)

Some of the issues involved

The Deebs believe this could be amongst the worse cases of child abuse that we have covered and we plan to keep everyone abreast of the developments.This situation in getting international attention. First there were allegation from campers in the UK. Then, serious allegations surfaced in Zimbabwe.

Spanking and imposed nudity on young teen campers is not simple physical abuse.

As you will hear in the link to this video, (we are having trouble embedding them) the allegations go beyond serious physical abuse if that can be imagined. Here are a few of the allegations.

So, besides the serious beating that took place, there was an element that I believe was sexual. I would not be surprised if allegation of sexual molestation surface. Also, I doubt that such behavior suddenly ceased so I believe there will be more recent allegation. If these allegations are true, and I believe they are, then John Smyth is one sick cookie.

PJ Smyth “I saw nothing!”

In spite of a close relationship with his father, PJ (not to be confused with CJ, especially since the subject matter has eerily the same) denies knowing anything about the abuse that went on at these camps. We believe that more information will be coming out on this matter in the coming weeks and we will keep our readers posted. We find it hard to believe that PJ knew nothing.

It is not beyond the pale to ask if PJ ever suffered abuse at the hands of his father. These sorts of behaviors rarely show up suddenly and often escalate over time.

Covenant Life Church claims nothing came up in their vetting of PJ Smyth.

Here are some questions that I think the leaders of CLC  should have asked prior to hiring PJ. Given their rather questionable history, surely they would have thought of this.

Special thanks to Todd Wilhelm for allowing to reprint his post.

Todd has been working incredibly hard behind the scenes and has made some valuable contacts. Please visit the link in order to view related videos. 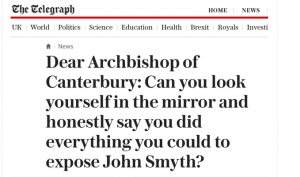 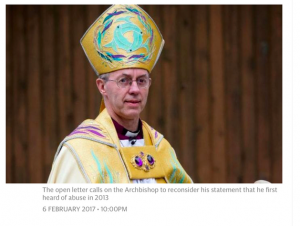 Dear PJ Smyth: Can you look yourself in the mirror and honestly say you did everything you could to expose John Smyth? 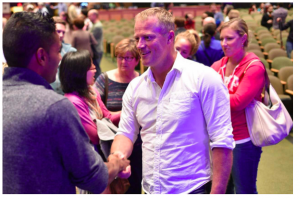 You, [PJ Smyth]  are also an observer. How and when you became one I know that you will want to tell me. And here’s the difficulty about being an observer. You have to ask yourself. “I knew about John Smyth. I become aware about some of the things that this abuser did, I have ‘observed’ them. Can I look myself in the mirror and honestly say that I did everything I could to report to the correct authority all the things that I knew? Did I give the people who might bring the abuser to justice every scrap of information that they might need? And, if I didn’t, then thinking very carefully about this – whose side have I been on, all this time? The side of the victims. Or the side of the abuser?” (Todd Wilhelm)

PJ Smyth has now published three “Open Letters.”  He has yet to speak truthfully. You can expect there will be at least one additional “Open Letter,” perhaps more. In due time the truth will be revealed. We shall see just how “firmly committed to reporting any form of child abuse to the authorities” PJ has been.

“If religion cannot tell the truth about itself, it has nothing to say. Hypocrisy – professing one thing and performing the opposite – is the greatest moral violation. In approaching the crisis of clergy abuse, truth must be the preeminent goal. Truth – wherever found, however discovered, whatever it exposes – must be the agenda for any exploration of abuse by clergy. Anything that impedes unflinching directness, honesty, or clear unambiguous communication and confrontation of the facts will perpetuate the secret system in which abuse can continue and flourish.

All concerned citizens have a stake in the honesty of religious leaders. They should be a moral and cultural resource. Religion needs the help of all concerned women and men. Everyone is victimized by a system that fosters or tolerates abuse. It is not unholy or unseemly to be vitally interested in the performance of moral leaders. If religion was taught anything by the German holocaust of the Jews it is that standing by silently does not absolve from guilt. Institutional structures and behaviors are not above question or challenge.”
A.W. Richard Sipe, “Sex, Priests and Power,” page 45 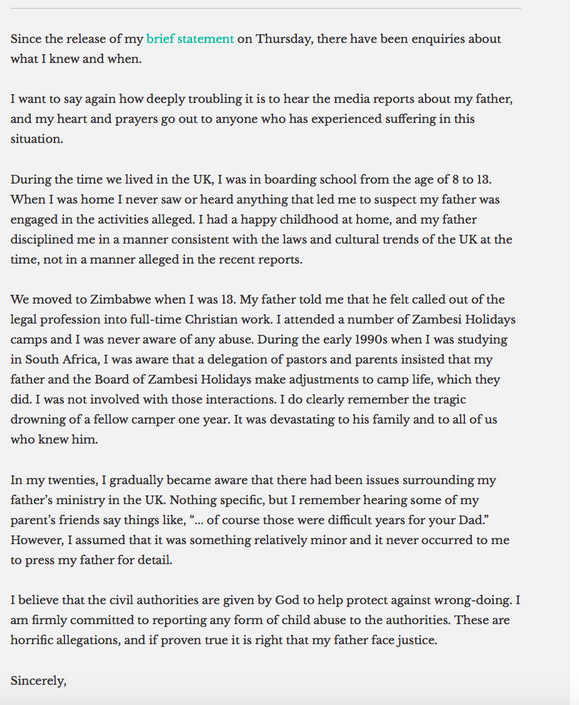 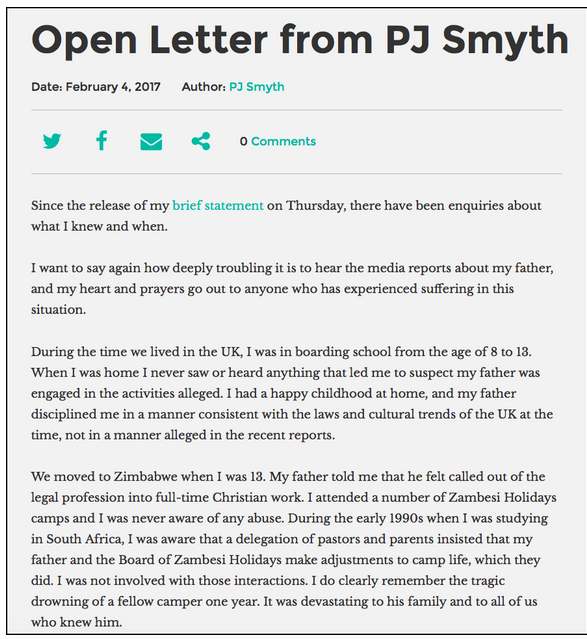 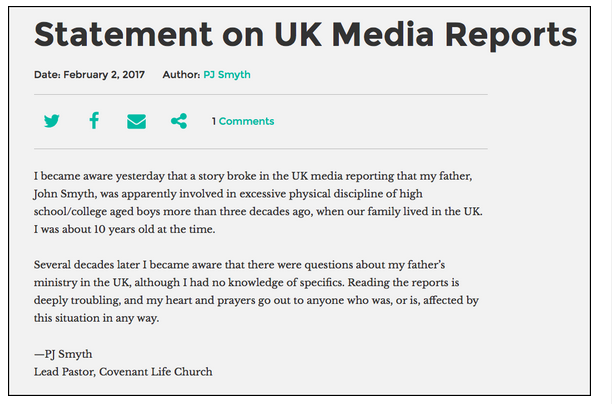 (Can PJ Smyth answer the same questions asked of the Archbishop?)

“I wanted to give you some time to reconsider the statements that you’ve made. I’d like to believe that you will find somewhere where you can be alone, without the advice of anyone else other than your own conscience and God. And when you have decided that you would like to talk, I’m now actually thinking that it’s not really important that we meet. In fact, there’s no reason for us to meet at all. Better not to. Because I know that everything that you tell me, you would happily say to the whole world.

Best wishes, and as we victims of John Smyth are always saying to each other – ‘I hope you’re okay’.”

Stay tuned. There will be more coming shortly.