“My argument against God was that the universe seemed so cruel and unjust. But how had I got this idea of just and unjust? A man does not call a line crooked unless he has some idea of a straight line. What was I comparing this universe with when I called it unjust?” ― C.S. Lewis, Mere Christianity link 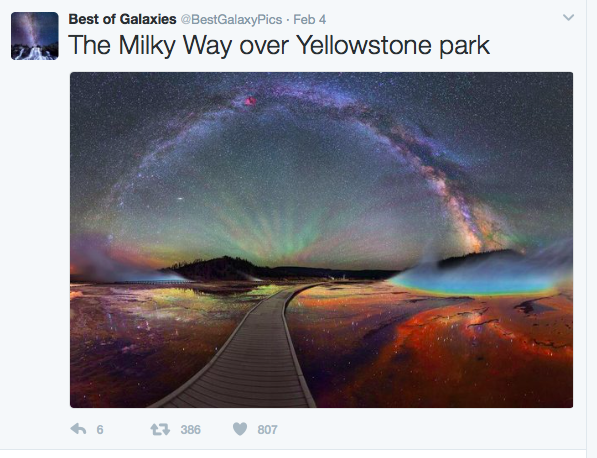 Thom Rainer gets pushback on using the word *affair* to describe a pastor's relationship with a woman outside of marriage.

When the pastor has an affair by Thom Rainer

Read his post and see who he forgets to mention. Here is a couple of screen shots of responses. 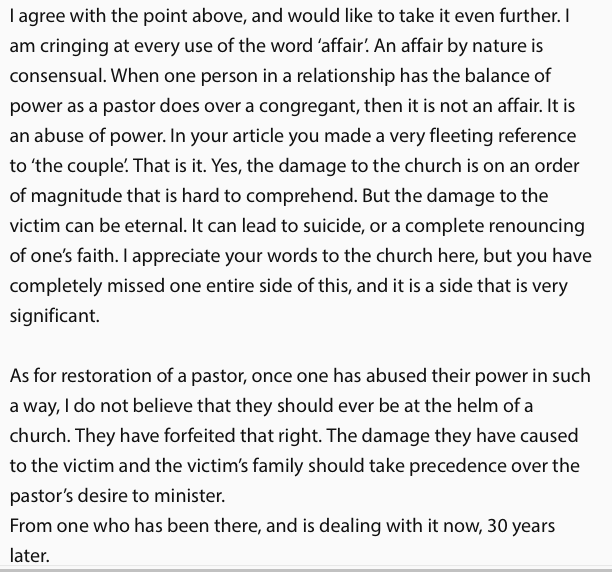 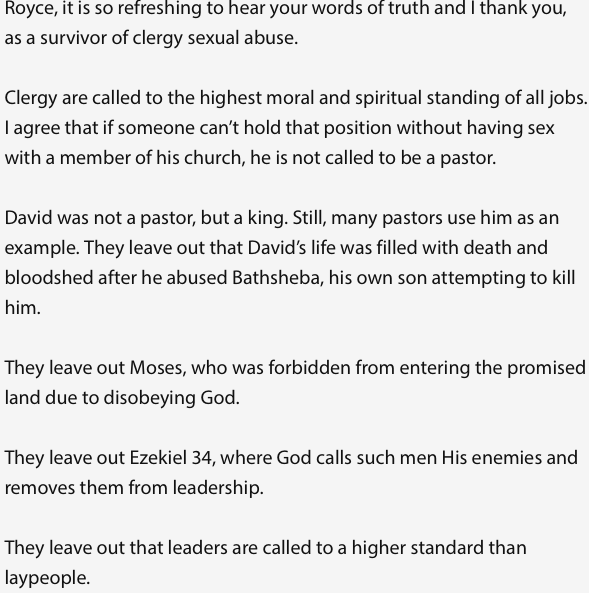 Clayton Jennings, after having sex with many young women, has decided that bloggers are the problem.

Clayton Jennings was recently exposed by Polemics Report for extreme levels of promiscuity that occurred throughout nearly the entire course of his public ministry. Young women brought forth evidence of Jennings’ misdeeds. Some brought forth evidence of Jennings grooming of them with talks of God and marriage, his attempts to get them drunk and commit fornication, giving them the abortion pill, and covering up the sin for the sake of “Jesus” and his “ministry.”

Jennings apparently intends. to return to the circuit during 2017 and has released  a video which channels Steven Furtick's infamous Hey Haters.

As the John Smyth abuse situation heats up and more information appears to be in the offing in regards to allegations of what his son, new pastor PJ Smyth of Covenant Life Church, knew or experienced, an understanding of English boarding schools and the scandals surrounding them are in order.

Here is what Christopher Hitches had to say.

During my infancy in Scotland I had had to be taken away from one school, with the forbidding name of Inchkeith, when it had been noticed at home that I cowered and flung up a protective arm every time an adult male came near me. Investigation showed the place to be a minor hell of flagellation and “abuse” (such a pathetic euphemism for the real thing) so I was taken away and put in a nearer establishment named Camdean. On my first day there I was hit between the eyes with a piece of slate during an exchange of views with the Catholic school across the road, with whom our hardened Protestant gangs were at odds. Innocent of any interest in this quarrel, I nonetheless bear the faint scar of it, above the bridge of my nose, to this day.

I myself was rather a pet or mascot of Oldie’s— a position which I swear I never sought and of which the advantages were purely negative. Even my brother was not one of his favorite victims. For he had his favorite victims, boys who could do nothing right. I have known Oldie enter the schoolroom after breakfast, cast his eyes round, and remark, “Oh, there you are, Rees, you horrid boy. If I’m not too tired I shall give you a good drubbing this afternoon.” He was not angry, nor was he joking.

Poor P.— dear, honest, hard-working, friendly, healthily pious P.— was flogged incessantly, I now think, for one offense only; he was the son of a dentist. I have seen Oldie make that child bend down at one end of the schoolroom and then take a run of the room’s length at each stroke; but P. was the trained sufferer of countless thrashings and no sound escaped him until, toward the end of the torture, there came a noise quite unlike a human utterance. That peculiar croaking or rattling cry, that, and the gray faces of all the other boys, and their deathlike stillness are among the memories I could willingly dispense with.

Denny Hastert sues his abuse victim to pay back the hush money given to him by Hastert.

Dennis Hastert Countersues Assault Victim to Pay Back Hush Money appeared in the Wall Street Journal. TWW posted about the original court trial and allegations in Denny Hastert’s Conviction: DC Politicians, T4G and The Gospel Coalition Look the Same When It Comes to Child Sex Abuse and Why Is Wheaton College’s Attorney and Leadership Defending Denny Hastert? Why Does This Sound Like The Gospel Coalition and CJ Mahaney?

For those who do not know here is the back story from one of our above posts. Hastert made a big deal about his Christian faith while he was Speaker of the House. Dee, back in her La La Days, actually admired him. No longer!

The Huffington Post reported in How Dennis Hastert Demonized Gays as Predators While He Was the True ‘Super-Predator.’

Meanwhile, the true example of a “super-predator” appears to have been former GOP House Speaker Dennis Hastert, a man who prosecutors now say molested at least 4 boys, including a 14-year-old and one who years later took his own life. Since the statute of limitations on those crimes, which took place decades ago, has expired, Hastert will only receive up to six months in jail on charges stemming from bank withdrawals of large sums of cash in violation of federal law, in what prosecutors say was for the purpose of “hush money.”

Worse yet, through the years, as he covered up the sexual assaults he committed as a wrestling coach back in Yorkville, Illinois, Hastert pushed policies and positions as a House member and as the Speaker of a far-right GOP majority from 1999 to 2007 that demonized gays in part by portraying gay men as sexual predators.

“We must continue to be proactive warding off pedophiles and other creeps who want to take advantage of our children,” the Illinois congressman stated in promoting a bill to stop exploitation of children online shortly before he became House Speaker. That was brought to light in a Politico report last year which revealed that Hastert had a file in his office labeled “Homosexuals,” which included the sexual predator smear against gay men

Here is a summary of his conviction from Wikipedia:

In May 2015, Hastert was indicted on federal charges of structuring bank withdrawals to evade bank reporting requirements and making false statements to federal investigators.[3][4] Federal prosecutors said that the money was to compensate for and conceal deliberately unspecified misconduct by Hastert against an unnamed individual years earlier.[5][6][7][8][9] Soon afterward, public accusations emerged that Hastert had sexually abused three male students (including the aforementioned unnamed individual) when he was a teacher more than three decades earlier.[10][11][12][13][14][15]

In October 2015, Hastert entered into a plea agreement with prosecutors. Under the agreement, Hastert pleaded guilty to the "structuring" charge (a felony), and the making false statements charge was dropped.[16] In court submissions on sentencing considerations filed in April 2016, federal prosecutors made allegations of sexual misconduct against Hastert, saying that he had molested at least four boys as young as 14 while he worked as a high school wrestling coach decades earlier.[17] At the sentencing hearing later that month, Hastert admitted under pressure from the judge that he had sexually abused boys.[18] The judge in the case imposed a sentence of fifteen months in prison, two years’ supervised release, and a $250,000 fine.[19][20] Hastert is "one of the highest-ranking politicians in American history to be sentenced to prison."[20] He entered the Federal Medical Center prison in Rochester, Minnesota on June 22, 2016.

It is quite clear that Dennis Hastert is one unrepentant molester. In fact, I believe he is also despicable. According to the Wall Street Journal:

Imprisoned former House Speaker Dennis Hastert wants one of his sexual-abuse victims to return the $1.7 million in hush money the Illinois Republican paid him over several years, according to a court filing this week in a civil case.

The document is a counter claim to the victim’s breach-of-contract lawsuit that he filed last year, arguing that Mr. Hastert owed him $1.8 million, what he said was the unpaid balance of an unwritten $3.5 million hush-money deal.

…Documents in Mr. Hastert’s federal criminal case say he abused the victim—referred to in filings only as “Individual A”—when the victim was 14 in the late 1970s and Mr. Hastert coached wrestling at suburban Chicago’s Yorkville High School.

The Wednesday filing on Mr. Hastert’s behalf in Kendall County Circuit Court asserts the victim was obliged to keep quiet about their deal for the remainder of his life.

“Since Plaintiff breached his obligations…any nonperformance on the part of Defendant [Hastert] is excused,” the filing said. It adds: “Plaintiff’s retention of the $1.7 million is unjust.”

…Federal prosecutors have said Individual A didn’t threaten to expose Mr. Hastert if he didn’t pay, adding they don’t regard the payments as part of an extortion. It was Mr. Hastert, they said, who refused Individual A’s request to bring in lawyers and put the deal in writing.

Prosecutors have also said they would have charged Mr. Hastert with sexual abuse if they could have, but the statute of limitations expired decades ago.

Something to make you smile after all of the sadness above.

Watch a dolphin give birth.