"C.J. MAHANEY IS NOT HUMBLE.  At least, that's what he'll tell you.  And that's one reason he's so well-qualified to write this book.  That's what I wrote about C.J. and this book ten years ago, and I feel that even more strongly now." 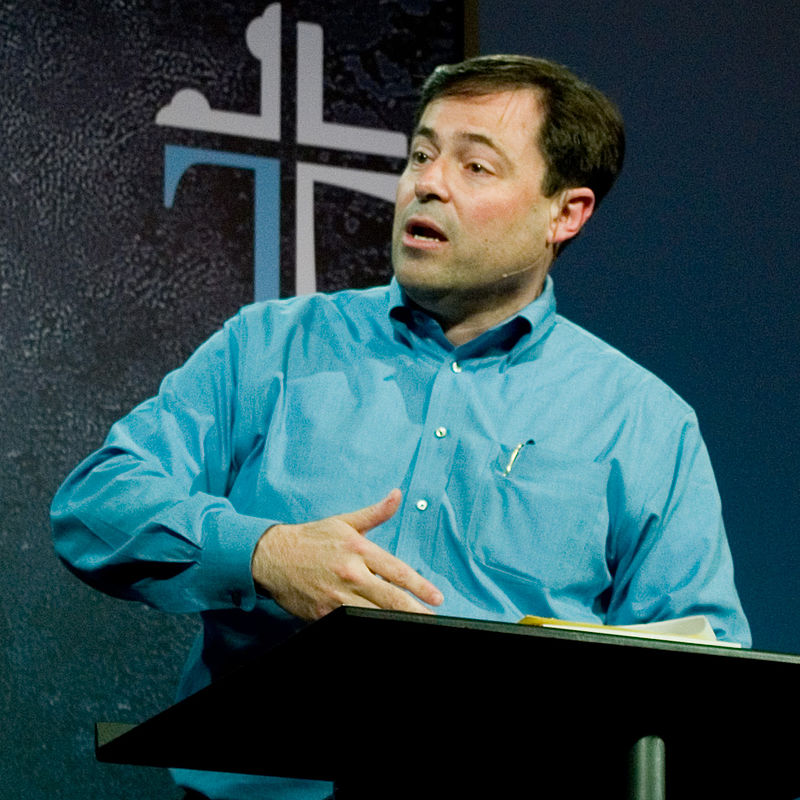 Are you familiar with Todd Wilhelm's testimony as a member of a 9Marks affiliated church?  Some years ago he wrote us and shared his story.  Todd had been approached by leaders in his church in Dubai to head up the book ministry.  As a voracious reader, Todd was well-qualified for this responsibility.  However, there was a problem…

Some years earlier Todd and his family had been members of a Sovereign Grace church when they lived stateside, and they were all too aware of the growing criticism regarding C.J. Mahaney, who was then president of Sovereign Grace Ministries.  Todd agreed to serving the church through this book ministry with one condition – he could not in good conscience offer C.J. Mahaney's books.

The church leaders were not pleased with Todd's firm stand against Mahaney.  In short order Todd and his wife realized they needed to resign from their church.  Incredibly, it took many months for their names to be removed from the church roll.  The Wilhelms were able to find another church to attend, and Todd now blogs about matters that are of great importance to him.  One such matter is the promotion of C.J. Mahaney by his buddies like Mark Dever.  Last week Todd published an excellent post which we are featuring below.

Please note:  There are audio clips which we have been unsuccessful in uploading.  When you see 'AUDIO', please go over to Todd's post to hear the clip.

Early in our blogging, Dee wrote a review of Mahaney's book about Humility, which you can access below.  As you can see, she pegged it with her blog post title.

We are grateful to Todd for continuing to expose Mahaney, Dever, and their cohorts in the Neo-Cal movement. 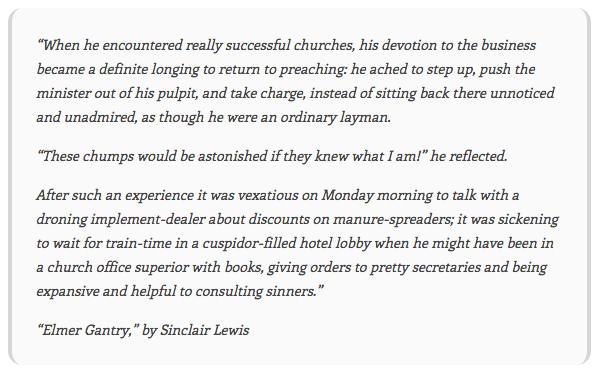 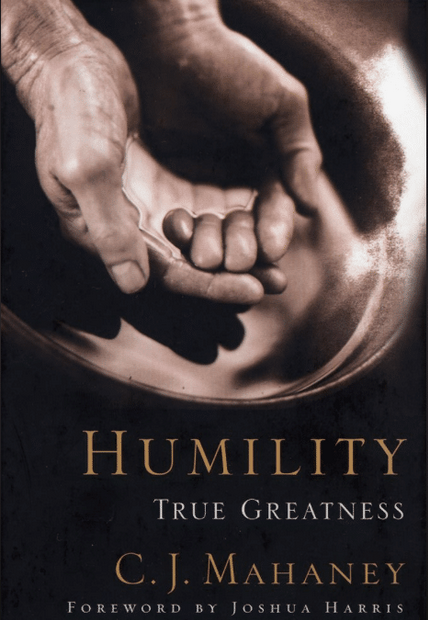 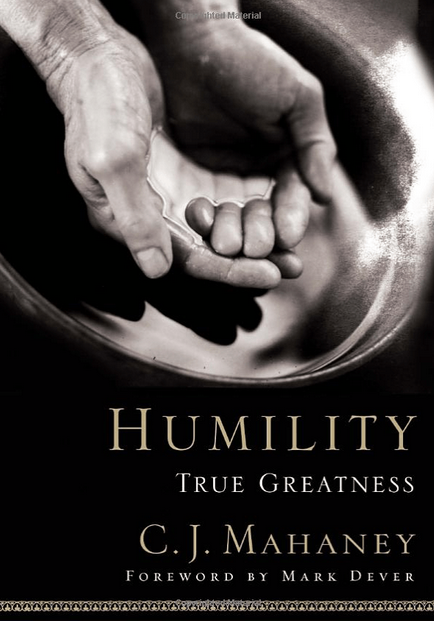 No, you’re not seeing double! The more observant among you will have noticed that there has been a change in the most recent edition of C.J. Mahaney’s autobiography – Joshua Harris has been unceremoniously dumped, his foreword replaced by an equally flattering version penned by Mahaney’s Captain, Mark Dever.

Harris, a man intimately acquainted with the fragile psyche of Mahaney, had to know this was coming. Likely the only surprise was that it took so long to be purged from Mahaney’s “Humility: True Greatness” book.  I would guess that Harris is actually relieved to have his foreword removed because what he wrote was pure flattery and lies, and that must weigh heavy on his conscience.

The average reader wouldn’t have known this until a few years ago; but as the unseemly tale of Mahaney’s corrupt ways came to light, we have all had the opportunity to understand what Mahaney’s colleagues knew for years, which is, far from being a role model for humility, Mahaney is actually a prideful, vindictive, insecure charlatan that drove dozens and dozens of leaders out of the Sovereign Grace denomination, and ultimately 100 pastors, 300 plus small group leaders, 40 churches including his home church (Covenant Life Church) and approx. 12,000 members from the Sovereign Grace Churches denomination. Giving declined by 67% or 3.3 million per year. The budget dropped from 6.6 million to 2.8 million. All because the man held up by Albert Mohler, Ligon Duncan and Mark Dever as the premier role model of humility is actually a real life model of the fictitious Elmer Gantry. More on this later, but first I want you to read the foreword Joshua Harris wrote. 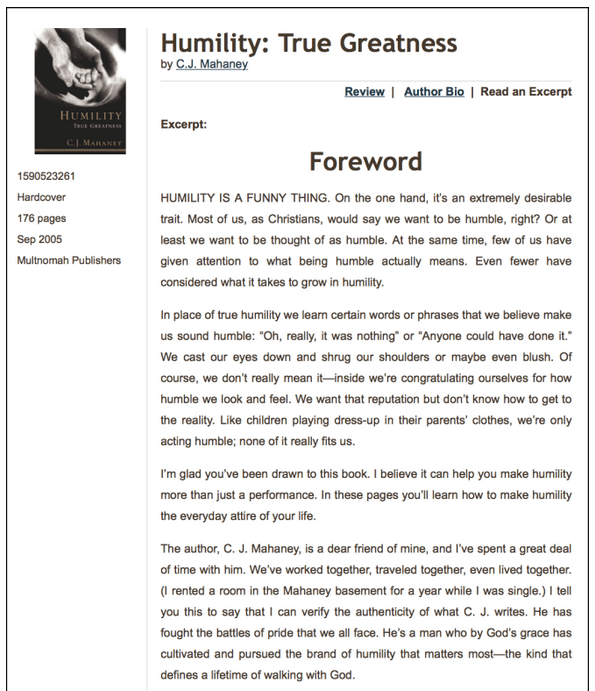 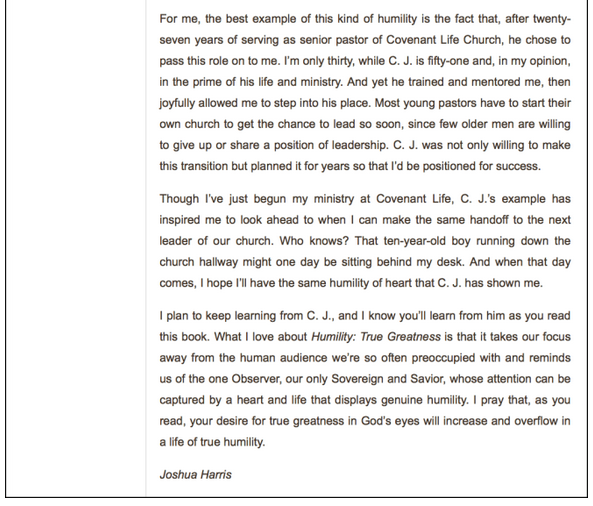 Sounds great, doesn’t it? But as the saying goes “you don’t want to see sausage made because you will never again eat it,” what went on behind the scenes of Sovereign Grace will turn your stomach and crush the neatly manicured tale of C.J. Mahaney being a beacon of humility.

Readers would have done themselves a service if, after they read Mahaney’s opening lines in the Introduction they would have  chucked the book in the bin and moved along to something more helpful; may I suggest “Green Eggs and Ham” by Dr. Seuss or “Crazy Busy” by Kevin DeYoung?

And you would be correct.

So let’s take a look at the Sovereign Grace Sausage Factory, shall we? 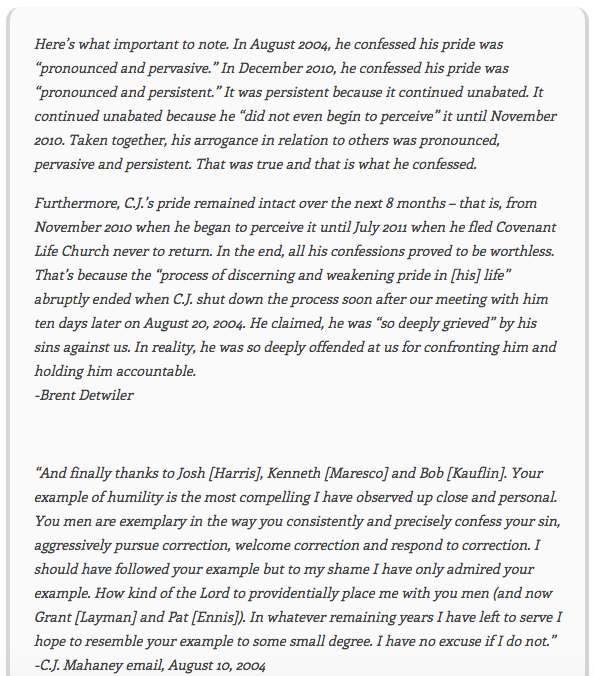 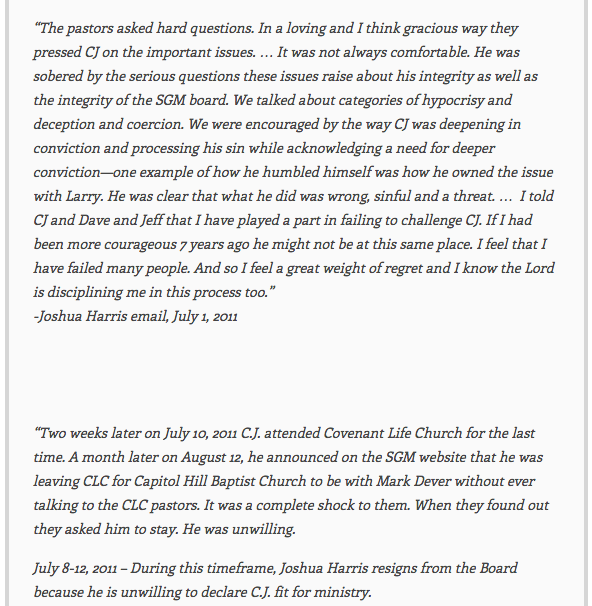 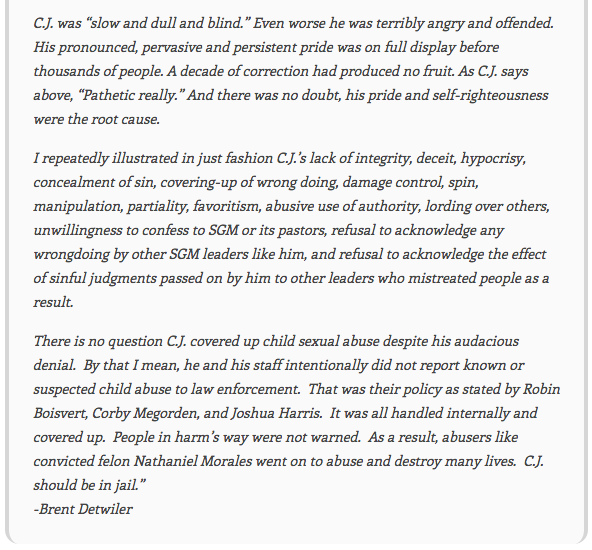 Below is an excerpt of a Mahaney sermon at Mark Dever’s  Capitol Hill Baptist Church, March 30, 2003. On display is the typical Mahaney ploy of flattery and cash donations to obtain the friendship of a celebrity. 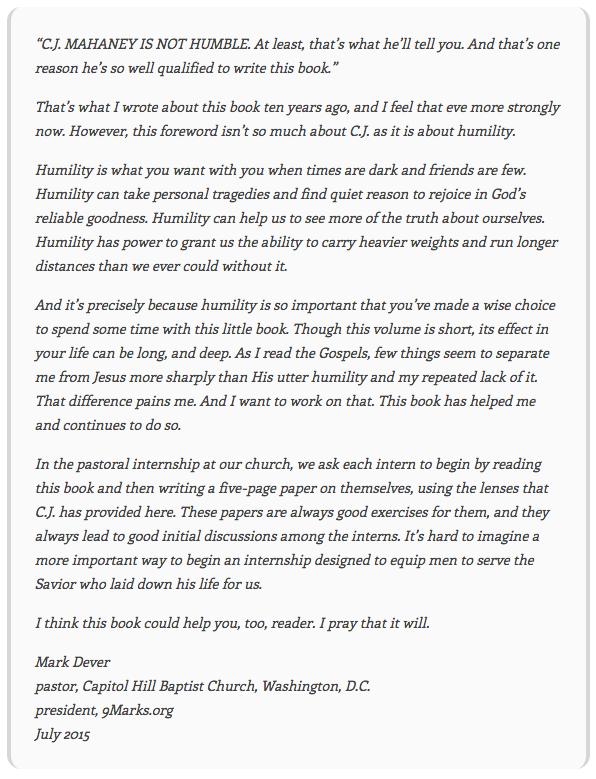 It is telling that the first book Mark Dever has his new interns read is “Humilty: True Greatness.”  It is actually shameful. Mark Dever has had an opportunity to read all the inside information published by those who spent years with C.J. Mahaney and actually know what type of an individual he is. Whether he has availed himself of that information is not known. What we do know is that Dever has repeatedly been the recipient of unabashed flattery by C.J. Mahaney, and at least ten thousand dollars of money tithed by Sovereign Grace members, perhaps much more.  Flattery and cash have a tendency to influence a recipient to speak highly of the source, maybe even to offer a bit of flattery in return, which is what Dever’s foreword is.

Do you think Dever informs his young interns that the first book he assigns them to read on humility was authored by a man who was so proud that he chose to drive two-fifths of the churches in his denomination to depart the denomination rather than admit his sin? That he knowingly covered-up sexual abuse of children in his denomination, and then penned a false statement denying that he did any such thing? That he blackmailed the co-founder of the denominaton? That he set up a hush fund to keep a pastor quiet about the fact that his son was raped by another  Sovereign Grace pastor’s son?

Do you think Dever informs his young interns that he allowed C.J. Mahaney to flee to his church to escape discipline at his home church? This in direct conflict with what 9Marks continually preaches on church discipline.

I doubt it. Dever wouldn’t want his interns to realize what a hypocrite he is, nor would he want to reveal that he either lacks discernment or has been corrupted by money and flattery, or both.

This from Brent Detwiler: 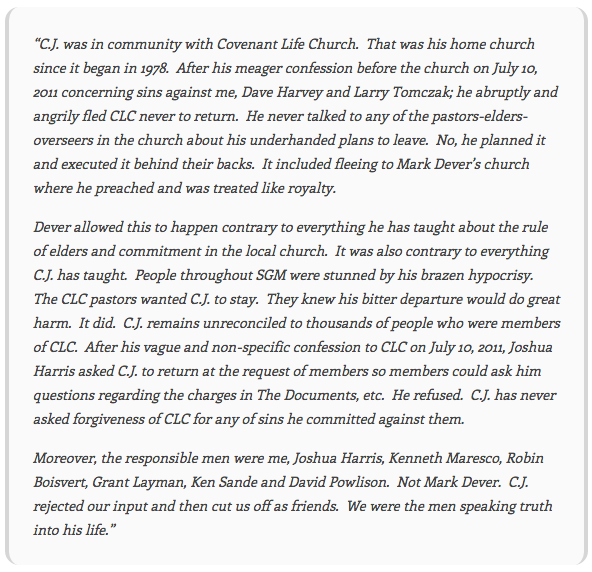 Finally, below is an excerpt of an email written by Bo Lotinksy to Brent Detwiler in 2012. Lotinksy was Executive Director (i.e., chief operating officer) of SGM for 14 years. He worked closely with C.J.Mahaney and knew him extremely well. 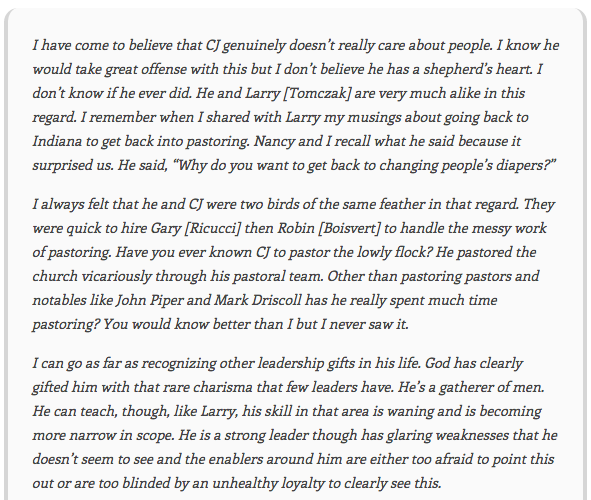 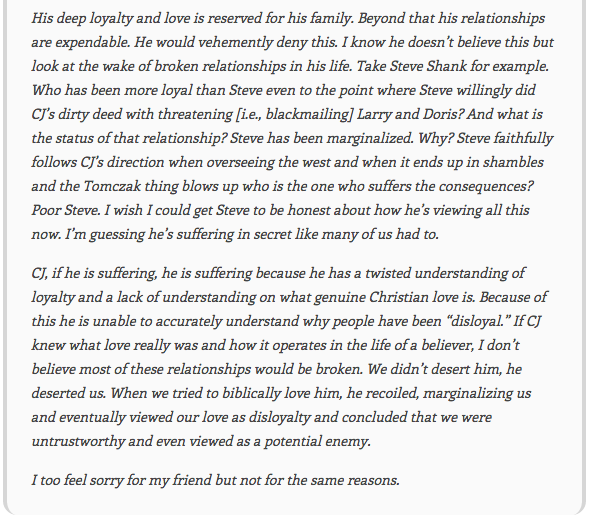 The audio below is Carl Trueman chastising the Christian celebrities at the 2012 T4G conference. All the celebrities on the panel applauded Trueman and outwardly agreed with his expressed sentiments, but apparently they were seething in their hearts. Trueman was never invited back and the same 12 celebrities are still the ones speaking at the high dollar conferences. (Inquiring minds would like to know the total renumeration each speaker at the last Together 4 the Gospel Conference received. Why is this information not readily available to the public?) 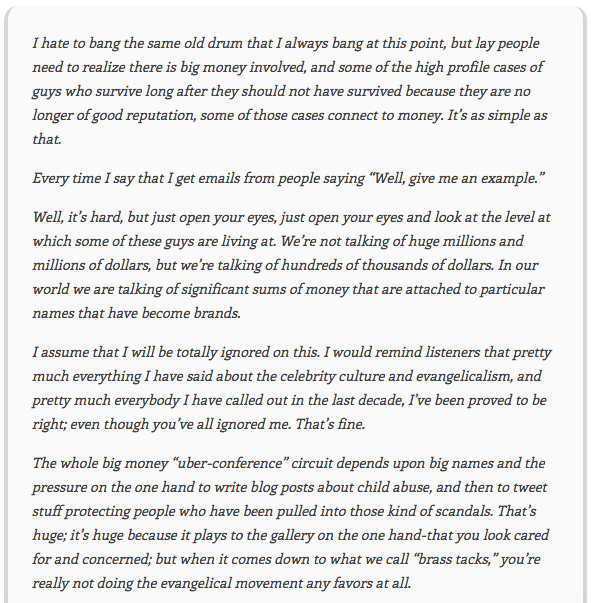 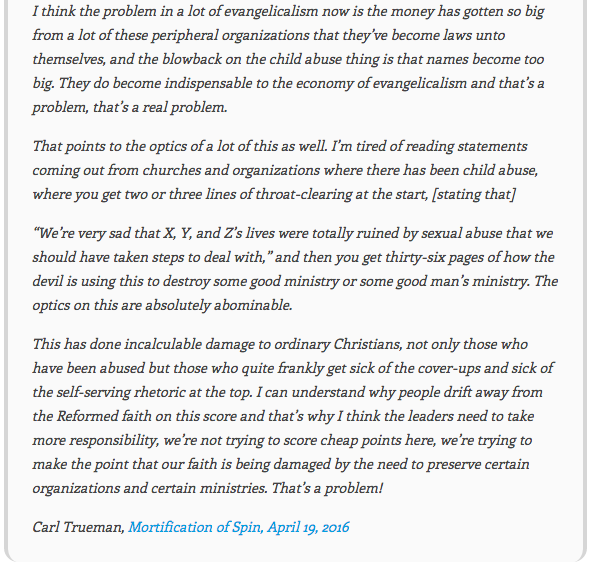 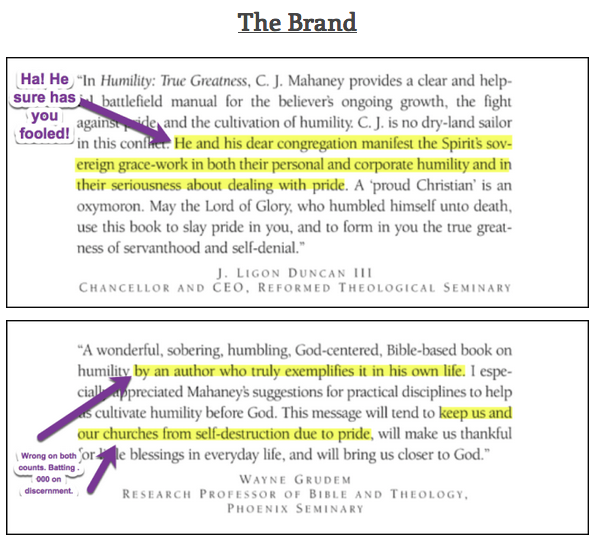 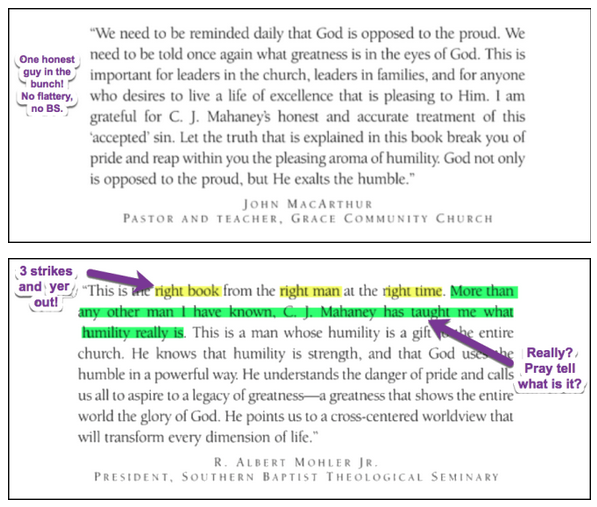