“When I see you, I think "I wonder which face she sees when she looks into the mirror.”  ― C. JoyBell C. link 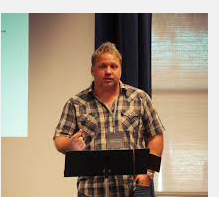 Who is Dustin Boles?

For those of you who are not aware of the story, you can read TWW's four posts here, here, here and here as well as ones by Watch Keep here and here.

Dustin Boles was a leader in the Acts 29 network and the head pastor of Mosaic Church. He stepped down due to pastoral misconduct. He has been accused of unwanted behavior in his actions towards women in the church and a police report has been filed. The referenced posts will bring you up to speed.

Boles was obviously a respected member of Acts 29 because Acts 29 featured Loving the People He Loves. In this post he quoted the love that Paul had for the people.

In Philippians 1:3-8, Paul expresses a deep affection for the people to whom he has ministered. It appears to me that his love for them is not only theological and pastoral but personal and emotional. Here is what he says:

“3 I thank my God in all my remembrance of you, 4 always in every prayer of mine for you all making my prayer with joy, 5 because of your partnership in the gospel from the first day until now. 6 And I am sure of this, that he who began a good work in you will bring it to completion at the day of Jesus Christ. 7 It is right for me to feel this way about you all, because I hold you in my heart, for you are all partakers with me of grace, both in my imprisonment and in the defense and confirmation of the gospel. 8 For God is my witness, how I yearn for you all with the affection of Christ Jesus.”

He railed against those pastors who said they couldn't stand their people. I wonder about this. Was he discussing others or could he be talking about himself?

Over the past year, I have met more than a few pastors who have spoken about their flock as if they just couldn’t stand them. One pastor spoke of his people as though they were below him in status.He expressed a desire to move out of the community where he is and that he felt like the people in the town he wanted to go to were more his speed socio-economically. Man, this rubs me the wrong way. Another planter expressed to me that he hated his city and almost everything about the culture there.

At some point during this month, Boles stepped down from Mosaic Church. He resigned in disgrace and was now a former pastor after being a pastor for 20+years.

He was working as a Business Development Manager for Alvix Laboratories in the same community as his former church and preparing to move into a home near one of his alleged victims. Isn't that nice…?

Who is Boles now?

When I first was informed of the following, I couldn't believe it was actually true. However, screen shots and a Google search convinced me. There is no question that Acts 29 believed that Dustin Boles was a Bible believing sort of guy and most likely Reformed in order for him to fit into their tight gospel™ community. So did the leadership of Mosaic Church. Was Boles so clever that he hid this from all of these leaders? Didn't he display anything off about his beliefs and actions?

Take a stroll through the screen shots which were taken sometime around October 12, 2016

1. A new website called True Skeptic was set up and it allegedly belongs to Dustin Boles.

As people allegedly began to contact Dustin Boles about this website, it was removed. However, if one searches Google this entry comes up, even though the link no longer works. 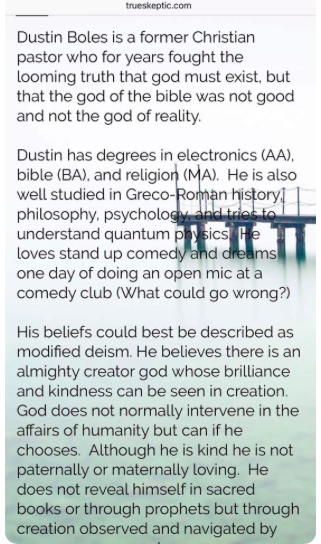 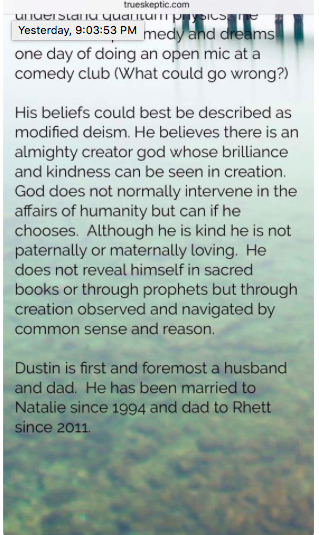 3. Dustin Boles seems to be setting up a skeptic speaking and debating *ministry.*
4. His coming book blurb appears to claim god is a deadbeat dad. 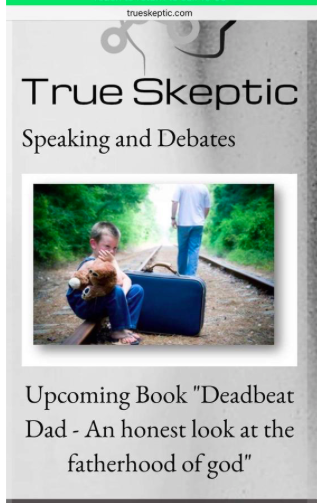 5. He seems to have some serious issues regarding God's relationship with mankind. 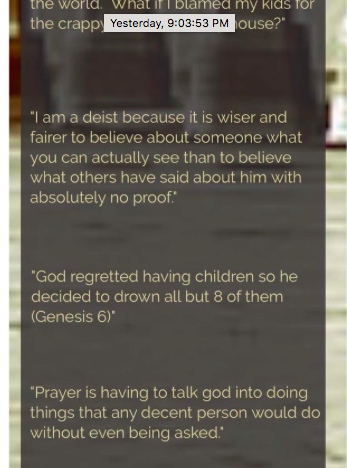 In discussing Boles and his former position as pastor with a member, I was told that he never expressed anything like this in any venue while pastor. Apparently, a number of people have contacted Boles about all of the above. He denied it was him but the website was promptly deleted. However, people who are in a position to know, claim that the website has been checked it out and it is registered to Dustin Boles.

What in the world happened? Is Boles dealing with guilt and running from the faith? Has he believed this for awhile and just played the part of a Calvinist? Given the questions that have been raised about his history (see previous posts), has Boles been lying about his life and faith while using the church as a means to an end?

I look forward to hearing your thoughts on this. Please continue to pray for his alleged victims. This guy is really starting to worry me.