"We are nearing the public launch and still have some work to do and some money to raise (you can give HERE), but God has proven faithful every step of the way, so we trust in his continued provision."

Five years ago Mark Driscoll recounted (in the video below) what God told him to do at just nineteen years of age, specifically:  marry Grace, preach the Bible (Mars Hill Church), train men (Resurgence), and plant churches (Acts 29).

Mark is still married to Grace; however, the other directives from Almighty God do not appear to have gone according to plan.  Mars Hill (the church God told him to plant) went bust, Driscoll stepped aside as president of Acts 29 after being requested to do so (Warren Throckmorton also wrote about it), and the Resurgence ended up cancelling its training event.  What went wrong?  Perhaps Driscoll misunderstood God…

Now it appears God's desires for the Driscolls are that they live in Arizona and plant a church. 🙄 On February 1, 2016, the following post appeared over at MarkDriscoll.com — Announcing The Trinity Church Plant in Phoenix.  In it is a video of the Driscolls talking about their recent move and upcoming ministry (see below).

Several days after the big church planting announcement, we published a post calling attention to the glaring omission in his announcement (namely Mars Hill Church).  Driscoll has totally distanced himself from the first church he planted.  The following month, we provided some of the details regarding the church plant here.

The Trinity Church was set to hold its first gathering on Resurrection Sunday.  Remember, Mark Driscoll is ruled by God.

Since that time things have been moving rather quickly.  At the end of last week, Driscoll made the following announcement on the church website (see screen shot below): 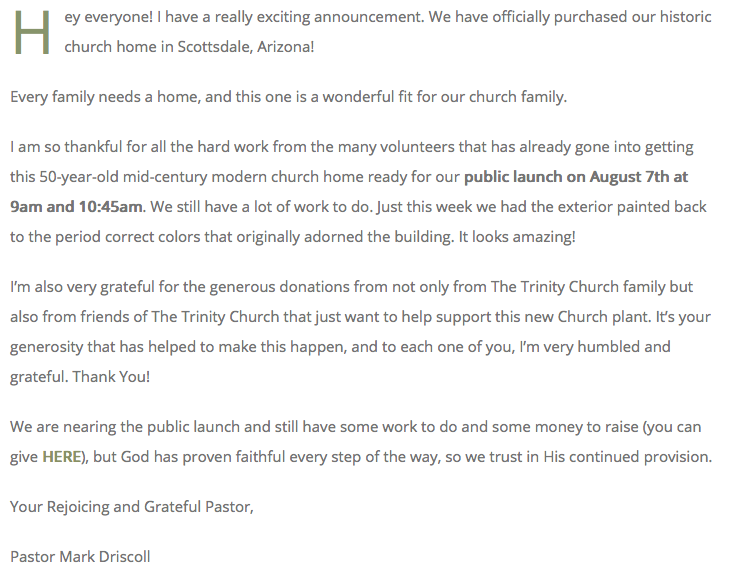 And here is Pastor Mark praising his loyal followers who are working hard to get the church ready for its official launch in August.

We are grateful that Warren Throckmorton is keeping up with the latest developments at Mark Driscoll's church plant.  He wrote about the purchase of the multi-million dollar facility here.

We are also very grateful to Wenatchee the Hatchet who does an excellent job of keeping up with information related to the now defunct Mars Hill Church and Mark Driscoll.  Over the weekend he wrote the following with regard to the governing board of The Trinity Church and the acquisition of the church faciliity. (see below) 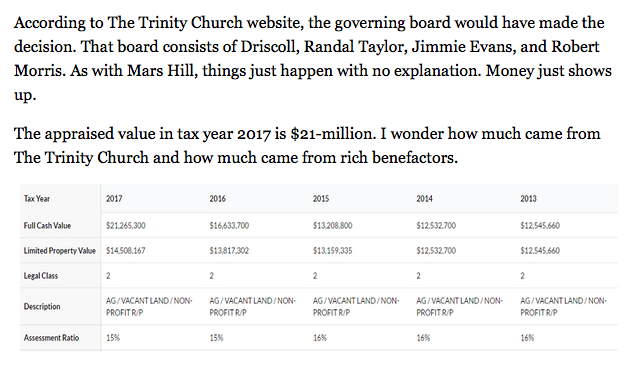 Wenatchee has been keeping an eye on things related to Mark Driscoll and what used to be Mars Hill Church.  He ran across the following information regarding the "Mars Hill Foundation for Planting Churches". 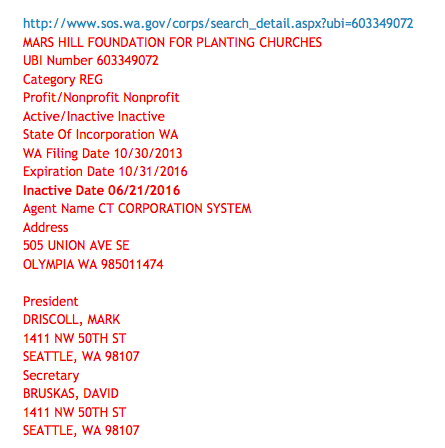 Not long ago this Washington State based foundation still existed.  What suddenly happened on June 21, 2016 to make it inactive???

The Trinity Church has apparently gone from rental to purchase in very short order.  For a church plant that doesn't have that many attendees, it makes one wonder who has the deep pockets?  Perhaps in time we will discover the financial angle to this church plant.

On another note, one of our commenters, mirele, has been protesting outside The Trinity Church in Arizona for some time now.  We were pleased to discover that Todd Wilhelm joined her yesterday.  He is currently in the states, specifically the Phoenix area because that is where his U.S. residence is located.  Todd went inside the church facility and immediately began making an audio recording.  In less than a minute the assistant pastor, who had just been up front, approached Todd and said he couldn't record.

Todd asked "Why not?  Do you have something to hide?"  Todd told us they were watching him like a hawk.  They had two guys standing near him and one sitting in front of him during the entire service.  From inside the church, Todd tweeted that it felt very much like he was in a cult meeting.  He shared the very brief recording (a half a minute or so) with us, and I could hear the assistant pastor telling him to turn off the recording device.  Todd Wilhelm will be writing about his experience when he returns to Dubai, and we'll be certain to let our readership know about his Trinity Church adventure. 🙂

In the meantime, if anyone knows how Mark Driscoll and his newly acquired followers have been able to purchase (and most likely finance) a multi-million dollar facility, we would sure love to know.  Was any money from the now defunct Mars Hill Church used to fund the new church plant?