"@CJ Mahaney hopes to care for pastors who are currently suffering." 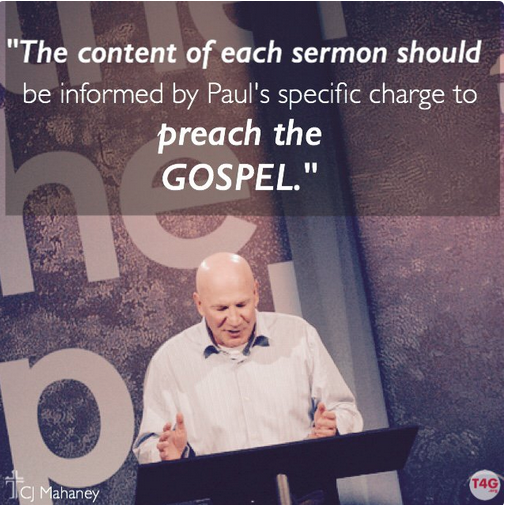 I had a feeling that Spotlight might bring home the top honor and expressed my sentiments about the documentary in last Monday's post. (see below)

We have to wonder whether the movie Spotlight is inspiring those who have been hurt in some way to (finally) speak out.  Although I have never been enamored with Hollywood, I have to express my tremendous gratitude to those who brought Spotlight to the big screen.  No doubt it was a collaborative effort, and I am praying that the movie will receive the Oscar for Best Picture this weekend.  Spotlight and the journalists the movie depicts are highly deserving of such accolades.  It's way past time to shine the spotlight on child sexual abuse.  How ironic that it is Hollywood which is bringing it to the forefront.

I have now seen the movie twice and cannot recommend it highly enough.  When I watched it in the theater, I had a hard time keeping up with the numerous characters and their connections to each other; however, the second time around, I followed it without any difficulty whatsoever.

For those concerned about the R rating, rest assured there are no graphic scenes.  I believe Spotlight was given this rating because during their interviews with Boston Globe reporters, a couple of the victims described in detail how they were molested.  My younger daughter watched the movie with my husband and me, and I feel strongly that we need to expose our children to the reality of pedophilia so they will be forewarned (of course, age appropriateness is important).  This terrible crime has been cloaked in secrecy for far too long. It must be exposed and immediately reported to the property authorities!

T4G Honors Mahaney by Keeping Him in the Spotlight

Just in case you were planning to attend the Together for the Gospel (T4G) gathering and have not yet registered, today is the last day to sign up for the bargain price of $249.  Tomorrow, the price of the golden ticket will jump to $329.  Remember, this price just gets you in the door.  Those attending have to get there, stay there, and eat there for three or more days (if they attend the pre-conference).  Students do get a discount on the registration fee (and courses credit!)  We would imagine that in quite a few cases churches are picking up the entire tab for their pastors who attend, perhaps without congregants even knowing about it.  Oh, and let's not forget about the gynormous bookstore!

The T4G organizers owe a debt of gratitude to social media, which appears to be their primary means of advertising.  They not only have a Facebook account, but they Tweet up a storm!  It has been interesting to follow their Twitter account as the registration deadline approaches.  For example, over the weekend three Tweets were sent out regarding the same Mahaney promo clip.  See screen shots below.

Here is the short clip of Mahaney that T4G leaders seem desperate for their followers to see.

So Mahaney wants to help pastors who are suffering?  We are left wondering if he means Neo-Cal pastors who have been hired by Non-Calvinist congregations and stealthily attempt to conform the church to the T4G standard?  Some congregations are finally waking up to such cunning tactics and challenging the changes that their newly hired pastors are making.  Will these pastors be getting together in Louisville to compare notes about their 'unregenerate' congregations?

Let's see..  who is T4G more concerned about?  Suffering pastors who bring it on themselves or the victims of child sex abuse?  We believe we know whom Almighty God favors, and it's not the pastors…  Think… millstone.

As an aside, it was recently announced that R.C. Sproul will not be appearing at the 2016 T4G.  Here is a screen shot of that update. 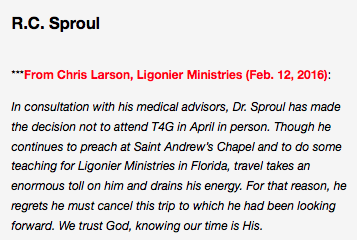 We leave you with this to ponder.  We know that the T4G boyz believe in God's sovereignty over everything, so we have a question.  Why do you think Almighty God arranged for Hollywood (of all people!) to vote Spotlight as best picture just weeks before T4G is planning to feature C.J. Mahaney on stage?  Is Our Heavenly Father trying to tell the Neo-Cals something of utmost importance?  We believe so…