"Spotlight is the gripping story of how The Boston Globe's "Spotlight" team uncovered the most massive cover ups in recent history, the Massachusetts Catholic sex abuse scandal." link 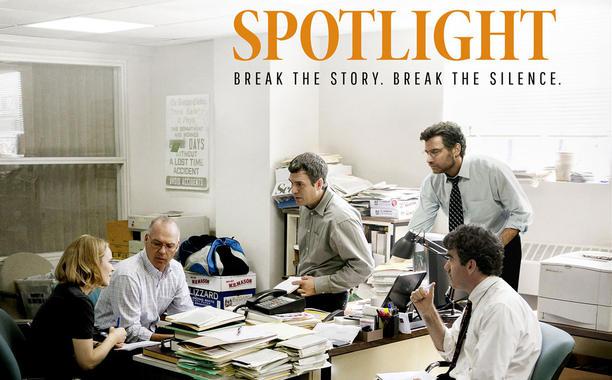 Spotlight, which recently won best picture at the Critics' Choice Awards and has been nominated for Best Picture at the upcoming Academy Awards, is being released on Blue-ray and DVD tomorrow!  Dee, her husband, and I went to see the movie shortly after it hit theaters, and we cannot recommend it highly enough.  In fact, I plan to go out and buy it tomorrow.

For those of you who may not be familiar with this important documentary, here is an overview:

After we saw the movie, Dee wrote a post entitled Spotlight: Systemic Abuse Is Now Being Exposed in Evangelical Cliques and Denominations.  Here is an important excerpt from that post:

Systemic abuse in the Catholic church exposed by media

At first, the Spotlight team was focused on proving that the Archdiocese of Boston was protecting a few specific pedophiles, one of whom was Father Birmingham, the priest I knew well during my childhood. However, the new editor of the Boston Globe told them he wanted more. It was not enough to to nab a couple of priests since the system would still continue to protect others. He wanted the protective system to be unmasked.

This was a bold move on the editor's part. The Boston Globe was known for its close, collegial partnership with the Archdiocese of Boston. The Globe had exposed a couple of priest pedophiles but had done so discretely, burying the stories within the metropolitan section of the paper. The paper had apparently been given documentation by a few local individuals who had been molested, one of whom was the local SNAP representative. (Yay SNAP!!) However, the documented abuse was studiously ignored, even by the Spotlight team. (I plan to write about that on Wednesday.)

Some of the incidents were reported to the Archdiocese by victims and even some priests. These were apparently handled out of court, involving monetary payoffs to the victims and their families. Those victims had to sign a confidentiality agreement. According to the movie, these acts alone involved @20 priests!

So, the reporters began to dig and they found over 100 priests that had been involved in molestations in the Boston area alone!  These priests were moved from parish to parish. Some were sent away for some form of counseling, reportedly ineffective, but were then allowed back into the system. Most of this was overseen by Cardinal Law. Read what happened to him as the scandal continued to grow.

Law resigned as Archbishop of Boston on December 13, 2002, allegedly in response to the Roman Catholic Church sex abuse scandal after church documents were revealed which suggested he had covered up sexual abuse committed by some Catholic priests within his archdiocese.

Pope John Paul II appointed Law as Archpriest of the Basilica di Santa Maria Maggiore in Rome in 2004; he resigned from this position upon reaching the age of 80 in November 2011.

Law was accused of protecting the pedophile priests.Then it appears that Law was protected by none other than the Pope himself, who granted Law a position (and some might say asylum) within the Vatican. As you may know, the Vatican is its own independent state and can refuse to extradite priests for trial.

Finally, the Globe broke its longstanding ties to the Archdiocese and published its reports. This encouraged victims who had been silent to speak out, eventually exposing over 200 priest.

Cardinal Sean O’Malley on Thursday released a long-awaited list of priests accused of child sex abuse in Boston in the last 60 years, but he opted not to include certain priests, including ones who died without being publicly charged.

In a letter, O’Malley said 248 of Boston’s priests and two deacons have been accused of child sex abuse since 1950. But he said he decided against releasing 91 of the names, including the deceased priests who weren’t publicly accused; those working in Boston under religious orders or other dioceses; and priests named in unsubstantiated accusations that never went public.

Todd Wilhelm recently wrote a post calling attention to the upcoming release of Spotlight.  Here is a important paragraph in that post.

We Protestants are living through our own version of “Spotlight". In the last few weeks, TIME and the Washingtonian have published stories detailing the sexual abuse scandal in the Sovereign Grace Churches denomination.  A few men have been convicted of crimes and there are several more men that should face criminal charges for their participation in the sexual abuse scandal and resulting conspiracy to cover-up the abuse. Not unlike the Roman Catholic Church, the “priests” of the Neo-Calvinist wing of American Evangelicalism have largely remained silent, and some continue to participate in conferences with C.J. Mahaney, the former “Pope” if you will, of the Sovereign Grace denomination.

Todd also featured the story of a man named Danny Murphy who lived through the era on which the documentary was based.  Danny reached out to Todd with his story, and Todd asked for permission to re-publish it.   It is entitled Spotlight – Inside The Locker Room: The story of a priest, a boy, and a soccer ball, and you can access it here.

Incredibly, there seems to be an unprecedented number of individuals coming forward to report abuse by well-known individuals in both the religious and secular worlds.  Bill Gothard and Bill Cosby immediately come to mind…

We have to wonder whether the movie Spotlight is inspiring those who have been hurt in some way to (finally) speak out.  Although I have never been enamored with Hollywood, I have to express my tremendous gratitude to those who brought Spotlight to the big screen.  No doubt it was a collaborative effort, and I am praying that the movie will receive the Oscar for Best Picture this weekend.  Spotlight and the journalists the movie depicts are highly deserving of such accolades.  It's way past time to shine the spotlight on child sexual abuse.  How ironic that it is Hollywood which is bringing it to the forefront.