“Aunt Mercy put down her tiles, one at a time. I-T-C-H-I-N.
Aunt Grace leaned closer to the board, squinting. "Mercy Lynne, you're cheatin' again! What kinda word is that? Use it in a sentence."
"I'm itchin' ta have some a that white cake."
"That's not how you spell it." At least one of them could spell. Aunt Grace pulled one of the tiles off the board. "There's no T in itchin'." ― Margaret Stohl, Beautiful Creatures link 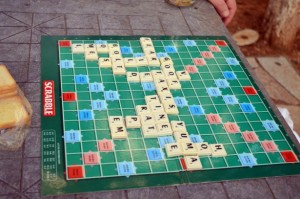 I believe in a sovereign God. However, I believe in a sovereign God who is big enough that He does not have to specifically control every last detail in our lives in order for His will to be done. Today I could choose to go to lunch at Panera, skip lunch, bring lunch to my elderly parents, make myself a bologna and cheese sandwich and each of those choices could fit within in His will.

I believe that a sovereign God puts checks and balances in place so that certain things do not happen. For example, I believe that God would most likely prevent us from blowing up this entire planet and killing everyone on it. He has said things would end a bit differently. I believe that, on occasion, God intervenes and causes a miracle to take place that fits within His very large plan for the human race.

I believe that He wants us to be faithful to Him in whatever choices we make. In other words, a bank teller could have as much or even more of an impact on this world as a missionary or pastor so long as the bank teller is mindful of God in his/her work. Our good friend Matt Redmond wrote a book called The God of the Mundane which brilliantly and simply discusses this.

I had planned to write another post today but yesterday I read the following post from John Piper. I found myself confused by his absolute assuredness of his position in How to Know the Will of God. He appears to offer contradictory thoughts and I am interested in getting feedback from our readers.

Piper apparently preached this sermon: How to Know the Will of God: Finding Direction with the Renewed Mind at the Good Shepherd Community Church, Portland, Oregon. If you wish to listen to the sermon, here it is. I am quoting the relevant part from his post at his Desiring God website.

First I will present Piper's argument and then I will explain why I have problems with Piper's exposition.

God controls each and every letter that you get in the game of Scrabble.

1. Did you know that the game of Scrabble is not just a game? It has eternal significance!

2. Did you know that God determines the results of every dice roll Las Vegas and also controls your unconscious mind.

John Piper believes this with all of his heart. Dee, on the other hand is absolutely exhausted to think that God believes each and every little game I play with my kids or husband has eternal significance beyond just enjoying each other. However, Piper claims that God is controlling our unconscious mind as well. So, we don't have to worry about which had to open the door. God is taking care of it without us even being conscious of it.

So “will of God” means “all things God does.” All things. He works all things according to the counsel of his will. This extends to the details of all existence. Matthew 10:29, “Not one sparrow falls to the ground apart from our Father in heaven.” Proverbs 16:33, “The lot, the dice, are cast in the lap and every decision is from the Lord.” In Reno, Las Vegas, Atlantic City, every dice rolled God decides what turns up. I believe that with all my heart.

I play Scrabble with my wife. We don’t gamble. But we reach our hand into the bag to pull out letters. Now do you pray at that point? I need a “Z”. She is way ahead. I totally believe God decides what letters come out in my hand, so I do pray. And I thought through how I should pray. This is a marriage issue. I don’t pray: Let me win. Oh, no, no, no. God knows who needs to win. So I pray: For the kingdom and for the family. Whoever needs to win, for humility or encouragement, you know. So I don’t try to pull rank on her and pray for victory. No way.

…So this afternoon you are probably going to make decisions about what? Half a dozen things that you are going to do. Might watch a ball game, might take a nap, and you think them through. Think of pros and cons and you do them. The rest of your life and you are going to make hundreds and hundreds of actions between now and the time you go to bed tonight that are just going to flow out of you, like Jesus said, “Out of the abundance of the hear the mouth speaks and you will give an account for every idle word.” And you didn’t plan 95 percent of them.

God has two wills: a will of command and a sovereign will.

Those two realities, which are in the Bible: 1) God has a will of command — “Thou shalt not kill.” And 2) God has a sovereign will — I ordain that my Son be killed; I ordain what I forbid. That those two things are in the Bible corresponds to profound longings and needs that you have in moments of crisis and loss. You may not have thought this through, but you experience it. Suppose you were abused as a child and it has borne sad fruit for many years. Some uncle sexually abused you, or a dad. And somebody is trying to help you, counsel you and work through the implications of that. And somebody asks you, Do you think that was the will of God?

I don’t know how you would have answered before, but I have tried to give you a structure of biblical thought to know how to answer that question in a way that not only corresponds with the reality of biblical truth, but with deep needs of your soul. One need is to believe God hates what happened there. And when he was looking at the abuser he was saying, “Don’t do that! That is contrary to my will. I command you not to do that!” He hates what he sees and will approve of judgment. You need to believe that God is right there disapproving.

God can turn everything, including child molestation, into eternal good so don't push Him away. (Bear with me here.)

Secondly, you need to believe that God is sovereign, so sovereign in that moment that he can turn everything for your glorious and everlasting good. And if you try to solve the problem of God’s sovereignty at the moment of crisis and push him so far out of that moment of causality, so far to the edges, you know what is going to happen?

You will now be left with no God to help you deal with this and turn it good. He will be useless. You have just shoved him off into a realm where he can’t have anything to do with what happened. His will couldn’t be involved in it. His governance of the universe cannot oversee it. You cannot have a God who in anyway would ordain that it come to pass. And in your pain you shoved him so far to the edge of the universe that for the rest of your life you are crying out to a God to do miracles yet you have pushed him away.

God will provide miracles for the molested child so long as she believes God willed it. If she doesn't buy it, she will lose God.

And so you try to say there is no sense in which the sovereign God willed that, you will lose God for the rest of your life.

God will meet your needs so you will shine like the sun.

And you need two things: a God who can empathize with you as a high priest and hates sin. The definition of sin is God hates it and says, “Don’t do it! I forbid it.” And you need a God in that moment who is totally sovereign and governing all things so that even the sin being done against you is folded into his purposes for you and you can shine like the sun someday even in spite of that loss, that pain.

Does God care more about Scrabble letters than child molestation?

Due to this blog, I have met a number of people who were molested as children and have been privileged as they have opened up their lives to me. Many of these folks have somehow managed to hold onto the faith in spite of being terribly damaged by the horrendous abuse they have suffered. Some have been able to go on. Others still hurt in spite of praying for God to heal them. Some are unable to shine as the sun in this life. God, for some reason, decided not to perform John Piper's promised miracles so far in spite of their pleading and seeking after God.

In the post John Piper mentioned disease and death as other examples of pain that can occur during life. Due to my daughter's struggle with a brain tumor, I have spent more days than I can count in pediatric oncology units. Has John Piper ever seen little children crying day in and out from pain and fear, only, in the end to lose their lives as their parents cried and begged God to save their child. What about little Jessica Lunsford? This beautiful 9 year old girl was abducted, sexually brutalized and buried alive, suffocated and died alone and in pain. Where was the sunny miracles for all of these?