"Now, some of you may have heard we’re a Reformed church. Don’t Google it, don’t blow your head up. We love Jesus, read your Bible, stay off the Internet. It’s all shenanigans anyways."

(Under heading God Uses People to Save People) 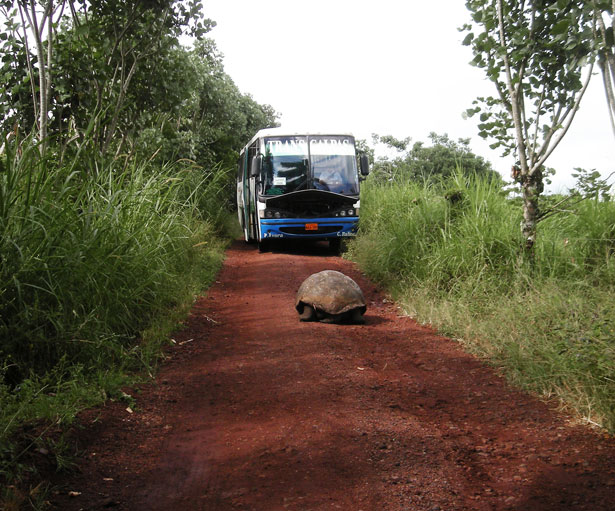 Giant Tortoise in the Road

Two years ago Mark Driscoll shared 10 Reflection on the Elephant Room (on the internet, I might add…)  Under Reflection #4 – I have a lot to learn, Driscoll wrote:

"I did not grow up in an evangelical church. I was saved at 19 and planted a church at 25, which was too early, as I was not ready. The church I pastor is the only church of which I’ve ever been a member."

Tragically, there are now A WHOLE LOT of bodies under the Mars Hill bus.  Not only that, countless people have been hurt by the Acts 29 church planting machine.

Dr. Warren Throckmorton, a professor of Psychology at Grove City College in Grove City, Pennsylvania, has worked tirelessly to expose Mark Driscoll, beginning with the plagiarism debacle.  He has written a number of posts about Driscoll and Mars Hill over at Patheos.  In case you missed them, here are some that we recommend:

Who at Mars Hill Church Authorized Church Funds to Buy a Place for Mark Driscoll’s Real Marriage on the NYT Best Seller List?

Mark Driscoll to Congregation:  Stay Off the Internet

On May 4, Mark Driscoll preached on Acts 6:1-7. In keeping with usual procedure, the video of the sermon was not posted on the church website until yesterday.

Those who watch the sermon on the website are missing some material from the live delivery two weeks ago. A segment of nearly six minutes was deleted from the sermon after discussion internally and some questions were raised externally. I have obtained a copy of the original sermon and have the missing material here.

In question is Driscoll’s teaching on the difference between sin and mistakes. In general, the Acts 6:1-7 sermon sounds like a self-defense. However, his teaching on Jesus making mistakes was of enough concern that MHC leaders deleted it.

To read the transcript of the missing section, go here.

We are grateful that Dr. Throckmorton is keeping a watchful eye towards Driscoll and his church and using the world wide web to reveal his findings.  What we find so ironic is that the internet was one of the primary tools Driscoll used to build his brand and his tribe (as he calls it).  He began Mars Hill in 1996 and rode the technological wave well into the 21st century.  In a strange twist, the church website has now been scrubbed.  What are they afraid of?

Clearly, there are problems at Mars Hill Church, and the bodies under the bus continue to pile up.

But that's not the only problem…

On a blog called Musings From Under the Bus, a post has just been published that turns the spotlight on the Acts 29 board.  The post title asks the question:  Why did the Acts 29 Board Fail to Address Driscoll's Abuse in 2005?

The article contends that since the Acts 29 Board knew about Mark Driscoll's egregious actions for close to a decade, it should "share in the responsibility for the abusive environment that now exists at Mars Hill Church".  According to the post:

The very first Acts 29 church plant ran into some problems. The way Mark Driscoll handled these problems demonstrated his abusive ruthlessness to the men on the Acts 29 board.

In dealing with the problems, a pastor, Ron Wheeler, interacted with Mark Driscoll and experienced the abusive treatment that Driscoll has now become notorious for. Here is an excerpt from a letter Wheeler sent the Acts 29 board:

“…was followed up the next day, with a phone call from Mark where he used the most obscene vulgar language that I can remember someone using with me.  The next day, he sent an email to the other elders, that I had no knowledge about until recently, that can only be defined as wildly inaccurate and slanderous.  The current leadership of The Gathering considers much of where things currently stand in leadership to be directly related to Mark’s influence and conduct in the process.

Over the past many years, I have identified and struggled with issues in Mark such as:  pride, speech (lack of self-control, sexually vulgar and slanderous, exaggeration that bordered on deception, gossip about others and confidential issues either about others to me, or about myself with others. Confidentiality issues carry legal implications for the church), and an impulsive/reactive spirit. It is because of the confidentiality and distortion of the facts, that I distrust individual communication with Mark, and need the involvement of the Board in these issues. My frustration is that I have never been silent with Mark or with anyone else about where I stand.  It is no secret to the past Acts29 leadership board that I have had frustration in many of these areas, and it ought to be noted by the existing board members that the two former board members have pulled out of leadership, one out of frustration with the conflict between Mark and David, one largely through dealing with conflict brought on by some of these same issues. This is now the second time that issues have gone on record with Mark regarding areas of character in speech and conduct.  The fact that Mark is an incredibly talented leader and speaker, cannot in any way substitute for the simple Biblical requirements of being Christ-like, much less the qualifications of being an Elder.  I can make a Biblical case from Titus regarding being overbearing, quick-tempered, self-controlled, upright, and holy, as well as 1 Timothy regarding above reproach, self-controlled, respectable, not quarrelsome, and reputation with outsiders. “ [emphasis added]

Rob Smith, who wrote this post, explains that Ron Wheeler's experience mirrors his.  Some years ago (around 2007) Mark Driscoll called Smith to inform him that he was being 'disciplined' for requesting a fair trial for the elders who had been fired, namely Bent Meyer and Paul Petry.  This simple request was met with accusations from Driscoll that Smith was 'a divisive man' who was 'trying to divide the elders'.  Smith then reveals:

I experienced the most obscene and vulgar language that I have ever endured. Mark Driscoll threatened me, demeaned me, said he would destroy me and my ministry and make sure I would never minister again.

This is what Ron Wheeler was describing to the Acts 29 board in his appeal for help. This is what countless other former members and elders have experienced.

As he concludes his post, Smith wants to know why the Acts 29 board members, namely Ed Stetzer, Darin Patrick, Steve Tomkins and Chan Kilgore, did not take action when Mark Driscoll's offensive behavior was initially exposed.

That was then, this is now.  Will the Acts 29 board finally own up to the mess they appear to have helped create at Mars Hill Church (and perhaps other Acts 29 churches)?  We were tipped off several years ago that there were serious problems with Mark Driscoll with regard to the church planting network associated with Mars Hill Church.  Now we are starting to understand just how serious those issues were.

We will continue to monitor the Mark Driscoll/Mars Hill situation, along with a growing number of concerned individuals, and keep you apprised of any developments.

In the meantime, we leave you with an interesting clip.  As you watch it, keep in mind that Mark Driscoll's first Reflection on the Elephant Room (2012) included these words, which we assume Driscoll wrote (although we can't be 100% sure)…

I also appreciate that when many were taking shots, Dr. John Piper came and stood next to me put an arm around me and said he had hope for me and loved me.

People like this are a gift. I want to grow in becoming a person like that, and though I’ve got a long way to go, I want to not get more angry, narrow, hardened and tribal as I get older but rather grow in grace. I don’t want to be a lonely old man shooting everyone who does not fit on my island.