"I could say to you we’ve not been given Dr. Mohler’s gifts, and it would be useless for me to encourage anyone to imitate Dr. Mohler’s mental ability.” 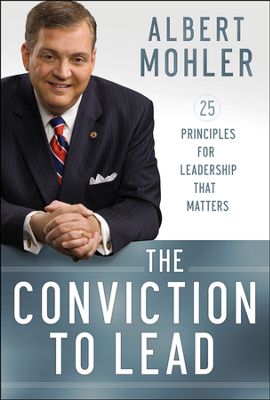 In the wake of a mass exodus of congregations from Sovereign Grace Ministries (including its flagship church where C.J. Mahaney pastored for 27 years), it appears those in leadership are holding out hope that they can re-group and reinvent themselves.  The annual SGM Pastors Conference called Hope Abounding took place several weeks ago.  Interestingly, Ray Orlund (one of the three "objective" men who concluded that Mahaney was fit for ministry) and his wife were speakers at the conference.  It appears that C.J. did not take the stage at this event.

Last week, however, another leadership conference took place at Cornerstone Church of Knoxville, which still belongs to the SGM 'family of churches'.  The name of that conference was Conviction to Lead.  Where have we heard that phrase before?  Oh yes, it's the title of Al Mohler's latest book.  As you might imagine, the conference centered around R. Albert Mohler Jr., who celebrated his 20th anniversary as president of Southern Baptist Theological Seminary earlier this year.  To highlight his achievements, a video was released a month ago entitled Recovering a Vision: The Presidency of R. Albert Mohler Jr.  It certainly appears that the release of Mohler's book, the video, and the conference were part of a devised plan.

Not surprisingly, the conference appears to have been a MEN ONLY event based on Mohler's recorded remarks.  You can listen to all the messages here.  And it shouldn't surprise anyone that it was a Mohler LoveFest.  After all, Mahaney owes his buddy big time for praising him so lavishly back in 2004.  Take a look…

Is it any wonder that Mahaney forked over big bucks to Southern Seminary after such praise by its president.  Unfortunately, quite a few SGMers have revealed that they had no idea their "family of churches" was giving money to a Southern Baptist seminary.

Mohler is in large part responsible for promoting Mahaney among the Neo-Cals, and C.J. has always gone overboard with his praise of Mohler.  For example, here is what Mahaney had to say at the conference about his buddy's reading prowess.

“And it isn’t just that your stack is sorry and pathetic in relation to his stack, when he’s done reading his stack he retains all he reads from his stack,” Mahaney continued. “He remembers it, and he can access it and access it well into the future.”

“Whereas for most of us, not only is our stack of books not as impressive as his, but once we are done reading even a single copy or the entire stack, we have a hard time remembering much of anything we read in the stack. And so if we’re just thinking about gifts and mental capacity, and stacks and the ability to retain and remember, it’s hopeless. We haven’t been given these world-class gifts.”

Yep, Mahaney believes Al is the "smartest man on the planet", as uttered several years ago at the Resolved conference.

What's really interesting is that it's not just the Neo-Cals that network.  We are establishing quite a network of friends here at TWW, and for that we are extremely grateful!

Our friend in Dubai, Todd Wilhelm, has done an excellent job keeping his readers apprised of what is going on in the Mohler-Mahaney universe.  Leading up to the conference, Todd featured this post on his Thou Art The Man website:  Mohler Attempts to Resuscitate Mahaney's Conference Career.

Is there any doubt that the 9Marks guys have awakened a sleeping giant?

And we were quite impressed with Todd's recent post Gospel Centered Brown Nosing.

Here is what Todd had to say:

It would seem that one of the ways to gain access into the “good old boys” network of celebrity conference speakers is to shamelessly flatter one of the “big dogs” in attendance while speaking to the masses of conference attendees.  C.J. Mahaney has fine-tuned this technique to perfection and never fails to utilize it.   Amazingly it seems to work wonderfully.  These celebrity preachers all love to have praise lavished on them publicly.  This past weekend Al Mohler, in an attempt to revive C. J. Mahaney’s floundering conference ministry, shared the speaking venue at a conference on leadership. Below is a four minute excerpt from Mahaney’s message on the subject “The Leader and his Home.” Loosely based on Ephesians 5 it is a wandering oratory having little to do with the text.  I think his schtick is getting old, but I guess there are still enough devotees willing to fork over the necessary cash to hear Mahaney’s wisdom “live.”  Personally I think one practical way you could lead your home is to quit shelling out the cash for these conferences and instead give the money to your wife to spend on whatever she would like.

Great suggestion, Todd!   To hear Mahaney talking about Mohler's impressive 'stack of books', go here and click on the audio just below the above excerpt.

The day after the conference, C.J. Mahaney preached another one of his canned sermons, which focused on Psalm 100.

We can understand why Mahaney is mesmerized by Mohler, but we cannot for the life of us comprehend why the president of the SBC's flagship seminary allows such excessive adoration.  How embarrassing!