“Jack Schapp had left his cell phone on the pulpit and a deacon had seen it on the pulpit and had picked it up to bring it back to him.  From what we understand, the deacon then saw a text come through from a teenage girl in the church, and it was a picture of Jack Schaap and this girl making out.” 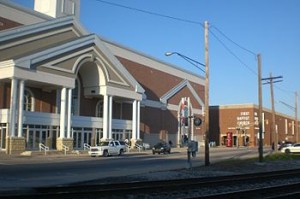 Technology can be a wonderful thing when used to glorify God and advance His kingdom.  However, it can also be extremely dangerous as Jack Shaap has just discovered.

It must have been divine providence when a deacon saw a scandalous photo being sent to Shaap's phone. The megapastor was promptly fired from the church he led for eleven years, and the matter was turned over to authorities.  Here is the press release posted on the First Baptist Church (Hammond) website:

"Hammond, IN – At this time, we deeply regret the need to announce that First Baptist Church has dismissed our pastor, Dr. Jack Schaap, due to a sin that has caused him to forfeit his right to be our pastor. First Baptist Church is in full cooperation with our local authorities in their investigation of this matter. Our church grieves over the need to take this action and the impact it will have on our people.

We ask that everyone pray for the families involved and pray that the situation will be handled in a Christ honoring manner. We look forward to the days ahead as we continue to service the needs of our surrounding community and the Chicago area."

The Chicago Tribune broke the story this way:

"An evangelical megachurch pastor has lost his job and is being investigated by the sheriff’s department in Hammond, Ind., after admitting to an "improper relationship” with a young woman, according to a spokesman for First Baptist Church of Hammond.

A board of deacons announced the decision to fire Dr. Jack Schaap on Monday night, then reported allegations to the Lake County Sheriff’s Department on Tuesday because it was unclear if the woman was a minor, spokesman Eddie Wilson said."

WGN Chicago has been on top of the story and reported the following night:

"Stripped of his duties, the pastor of a northwest Indiana mega-church has confessed to having sex with an underage girl when she was 16.

The Board of Deacons shared that with its congregation in Hammond Wednesday night. The girl was a member of the First Baptist Church of Hammond, the same church where Brother Jack Schaap was the pastor for the past 11 years."

Because the "age of consent" in Indiana is sixteen, no charges are expected against Schaap, according to the Post-Tribune.  That article goes on to state:

"At a news conference Wednesday, Terry Duff, chairman of the church’s board of deacons, said the church was cooperating with authorities and refused to cover up any wrongdoing.

Duff said he was made aware of the misconduct last Wednesday. After meeting with the board, he confronted Schaap, 54, Saturday afternoon.

Duff said the situation has been “gut-wrenching.”

“We love that man, and we trusted him,” Duff said. “This is a tough time for his family.”

Duff said Schaap was trying to reconcile with his wife, Cindy, the youngest daughter of former church leader Jack Hyles.

Church officials said they were committed to “calling into the light” any further misdeeds against the congregation’s young people. During a Wednesday evening service, they asked members to come forward with any information they may have."

Perhaps the atrocities condoned at Penn State for so long and the horrible aftermath are altering the attitudes of those who might have agreed to cover-up indiscretions, as so often seems to be the case.  One can only hope…  Yes, we are ALL sinners, but pastors are called by Almighty God to a higher standard.  I am grateful that this church has done the right thing in dismissing its pastor instead of protecting him.

As stated earlier, Jack Shaap is married to daughter of Jack Hyle, who pastored First Baptist Church of Hammond for over four decades, building it into a megachurch.  Wikipedia includes the following information about the church:

"The First Baptist Church of Hammond is a fundamental Independent Baptist church in Hammond, Indiana. It is the largest church in the state of Indiana, and in 2007 was the 20th largest in the United States.[1] Though founded in 1887, under Jack Hyles’ leadership from 1959–2001 it became one of the megachurches in the United States and during the 1970s had the highest Sunday school attendance of any church in the world.[2] In 1990, the church had a weekly attendance of 20,000.[3] It also operates Hyles-Anderson College, a non-accredited institution, and two K-12 schools, called City Baptist Schools (for children of the bus route of the church) and Hammond Baptist Schools (for children of the members of the church). Jack Schaap, Hyles' son-in-law, succeeded as pastor after Hyles' death in 2001 and served as pastor until July 2012."

Last year First Baptist Church celebrated the 10th anniversary of Jack Schaap's ministry there.  Cindy Schaap, who has spent her entire life in this church, addressed the congregation during the festive occasion.  Her remarks come just after the 33 minute mark.

Ironically, last year's celebration included the singing of Schaap's favorite hymn – Great Is Thy Faithfulness.  Please keep those involved in this terrible debacle, particularly Cindy Schaap and her children, in your prayers.

This is a developing story, and we likely provide an update next week.