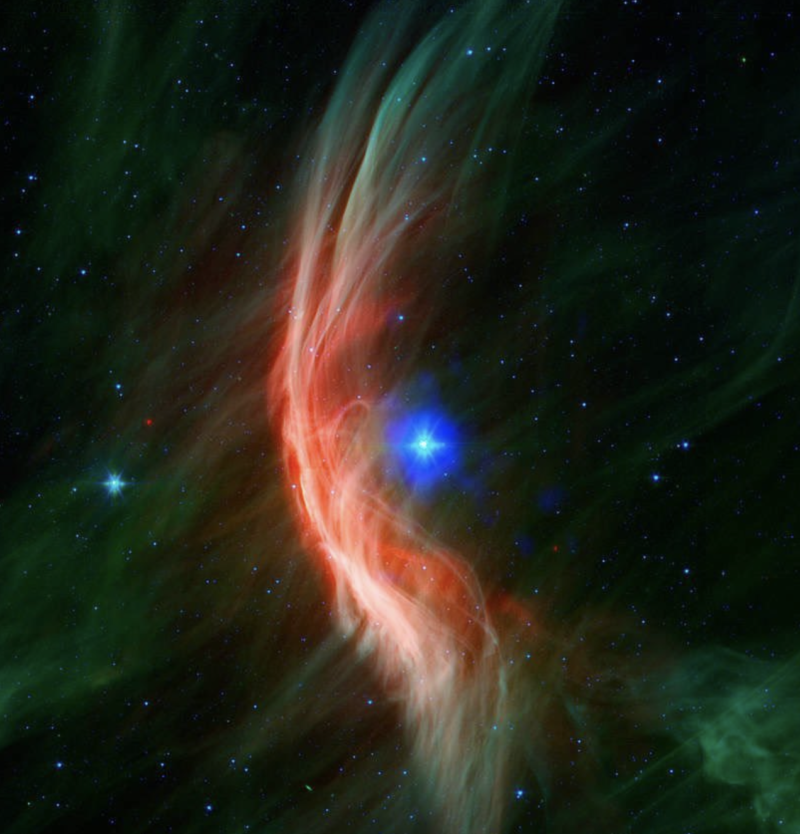 Zeta Ophiuchi is a star 20 times more massive than the Sun. NASA

“A man that flies from his fear may find that he has only taken a shortcut to meet it.” JRR Tolkien

I just returned from a trip to view all of the main beaches on the west coast of Florida. This concludes our decades of search for the most beautiful beach in the US. We have traveled the entire east and west coasts of the country. Dee even dunked in, over her head, on a beach in the Arctic at Prudhoe Bay. We think that the white sugar sands, turquoise water, and the morning appearance of dolphins in the Panhandle of Florida are the Parsons’ pick for “the best.” This includes Destin and 30A. Anyone who follows Dr. Beach and other such reviews will not be surprised by this pick. By now, I have caused a stir, and I look forward to hearing your votes for “the best.”

While in Florida, Jules Woodson sent me a text and said the DOJ would investigate the SBC. Given the other week’s news, it seemed to me that the DOJ was quite busy! Bill will tell you that I burst out laughing and said, “If you had told me this when I started blogging in 2009, I would have thought you were nuts.” I began to think about all the victims of sexual abuse in Baptist churches and the men who claimed to have weeded out all the bad theology in the 90s. Then, around 2005, the “Young, Restless, and Reformed began their rise in the SBC. They reassured us that if everyone saw it the way Calvin and the present-day theodudes saw it, the SBC would be among the most righteous of denominations.

They got the TULIP right and overlooked an ugly and growing stain on the supposed “purity” of the SBC theology. “Do not merely listen to the word, and so deceive yourselves. Do what it says.” NIV James 1:22.There was a sickness that had been spreading for years. I remember clueless Baptist women claiming that the reason the RCC had priests molesting kids was due to the fact they could not marry.” With noses firmly stuck in the ground, they overlooked something. Why would a priest molest a boy instead of having consensual relationships with an adult?

The answer was quite evident. These priests abused children because they were pedophiles. This meant that being married did nothing to prevent pedophilia. One of these women would discover that her husband was also a pedophile.

Another warped theology arose when abused people were told to be quiet because “They would hurt the church of Jesus Christ.” Few men in my former church appeared to care about the many abused boys. The SBC leaders re-abused the victims of sexual abuse, refusing to do anything about their abusers. Protecting their “reputation” was far more critical.

The vaunted Executive Committee/Credentials Committed re-abused my friend, Jules Woodson, by refusing to do anything to punish Steve Bradly and the Church of the Woodlands because, well, they wouldn’t say. Still, I bet it had something to do with a megachurch with tons of money.

Christa Brown was ignored for decades by the SBC. I called the church where her abuser continues to attend- First Baptist, Orlando. I was treated to the old “Don’t you think an abuser should be allowed in church.”

The SBC failed so many victims. The current leaders were well aware of the problems with Paige Patterson, but they continued to backslap until it was not advantageous. #Churchtoo made things much more difficult. How about the whispers throughout the decades of Paul Presller and his issues?

The Statement from the SBC leaders/entities link

The SBC Executive Committee recently became aware that the Department of Justice has initiated an investigation into the Southern Baptist Convention, and that the investigation will include multiple SBC entities.

Individually and collectively each SBC entity is resolved to fully and completely cooperate with the investigation. While we continue to grieve and lament past mistakes related to sexual abuse, current leaders across the SBC have demonstrated a firm conviction to address those issues of the past and are implementing measures to ensure they are never repeated in the future. The fact that the SBC Executive Committee recently completed a fully transparent investigation is evidence of this commitment.

We recognize our reform efforts are not finished. In fact, those efforts are continuing this very moment as the recently announced Abuse Reform Implementation Task Force begins its work and as each entity has strengthened its efforts to protect against abuse. Our commitment to cooperate with the Department of Justice is born from our demonstrated commitment to transparently address the scourge of sexual abuse.

While so many things in the world are uncertain, we can be certain that we serve a mighty God. Nothing, including this investigation, takes Him by surprise. We take comfort in that and humbly ask you be in prayer in the days and weeks ahead. Specifically, we ask God to grant wisdom and discernment to each person dealing with the investigation.
Daniel L. Akin, President, SEBTS
Jason K. Allen, President, MBTS
Bart Barber, President, SBC
Paul Chitwood, President, IMB
James K. Dew, President, NOBTS
D. Hance Dilbeck Jr., President, Guidestone Kevin Ezell, President, NAMB
Adam W. Greenway, President, SWBTS
Jeff Iorg, President, Gateway Seminary
Brent Leatherwood, Acting President, ERLC Ben Mandrell, President Lifeway
Willie D. McLaurin, Interim President, SBC EC R. Albert Mohler Jr., President, SBTS
Sandra Wisdom-Martin, Exec. Director, WMU
If any of you lacks wisdom, let him ask God, who gives generously to all without reproach, and it will be given him. James 1:5s

The DOJ probably has information that could possibly lead to an indictment.

This week I learned, due to another investigation (which TWW shall not discuss), that the DOJ does not begin an investigation unless they believe that there is likely to be an indictment by a grand jury. In other words, this is very serious.

I guess it could include:

What choice do they have? This is the DOJ, not your buddy who knows “somebody.” I am not impressed.

Here is the quote, “While we continue to grieve and lament past mistakes related to sexual abuse, “This is fascinating. The DOJ does not investigate mistakes. A mistake is bringing your KJV Bible to the hot new megachurch. Let’s get something straight. The DOJ is probably looking at the potential “CRIMES” committed. A lawyer most likely wrote this “Statement.”

They also had “issues,” but those are in the past.

They wrote, “current leaders across the SBC have demonstrated a firm conviction to address those issues of the past and are implementing measures to ensure they are never repeated in the future” The DOJ is not investigating ISSUES.

According to Merriam Webster, an issue is a concern or a problem. Notice how this nice-sounding, possibly lawyerly Statement appears to say that these problems, not crimes, are now in the past. But, make sure you understand that these are not crimes, merely “issues.”

The SATF proves we are in it to win it.

Look at that nice, $2 Million investigation by Guideposts. Surely this counts for something. Wait, what’s this I hear about the DOJ wanting to look at that report? That can’t count against the SBC, can it?”

It looks like there are going to be quite a few people involved.

But, they are still humble.

We take comfort in that and humbly ask you be in prayer in the days and weeks ahead. Specifically, we ask God to grant wisdom and discernment to each person dealing with the investigation.

This adds a bit more information. Given the SBC statement, they expect more people to be subpoenaed.

Leaders of the Southern Baptist Convention said Friday that several of the denomination’s major entities are under investigation by the U.S. Department of Justice in the wake of its multiple problems related to clergy sex abuse.

The SBC’s Executive Committee has received a subpoena, but no individuals have been subpoenaed at this point, according to the committee’s lawyers.

“This is an ongoing investigation and we are not commenting on our discussions with DOJ,” they said.

The DOJ is not commenting yet.

There was no immediate comment from the Justice Department about the investigation.

A Guidepost spokesperson declined to comment on news of the DOJ probe.

Nothing to fear, huh?

The SBC should be afraid. This unprecedented move spells potential trouble.

Oklahoma pastor Mike Keahbone, who serves on the Executive Committee and is the vice chair of the new abuse task force, said on Twitter that the investigation “is not something to fear … If there is more work to do, we will do it.”

I have read ten media news outlets, and all of them seem to link to the Guidepost investigation as the probable reason for the DOJ issuing the subpoenas. ABC News used the plural “subpoenas.” The Statement from the SBC big kahunas indicates that they expect to have multiple people talking to the DOJ, which would probably mean multiple subpoenas.

Al Mohler once said there would be dark days ahead for the SBC. He wrote the following in 2019. It was much worse than he could imagine.

The last few weeks have been excruciating for the Southern Baptist Convention and for the larger evangelical movement. It is as if bombs are dropping and God alone knows how many will fall and where they will land.

America’s largest evangelical denomination has been in the headlines day after day. The SBC is in the midst of its own horrifying #MeToo moment.

…Then people said that Evangelicals had a similar crisis coming, it didn’t seem plausible — even to me. I have been president of The Southern Baptist Theological Seminary for twenty-five years. I did not see this coming.

I was wrong. The judgment of God has come.

Judgment has now come to the house of the Southern Baptist Convention. The terrible swift sword of public humiliation has come with a vengeance. There can be no doubt that this story is not over.

…This is exactly what those who opposed the Conservative Resurgence warned would happen. They claimed that the effort to recover the denomination theologically was just a disguised move to capture the denomination for a new set of power-hungry leaders. I know that was not true. I must insist that this was not true. But, it sure looks like their prophecies had some merit after all.

…In Romans 1:18 we are told: “For the wrath of God is revealed from heaven against all ungodliness and unrighteousness of men, who by their unrighteousness suppress the truth.”

This is just a foretaste of the wrath of God poured out. This moment requires the very best of us. The Southern Baptist Convention is on trial and our public credibility is at stake. May God have mercy on us all.