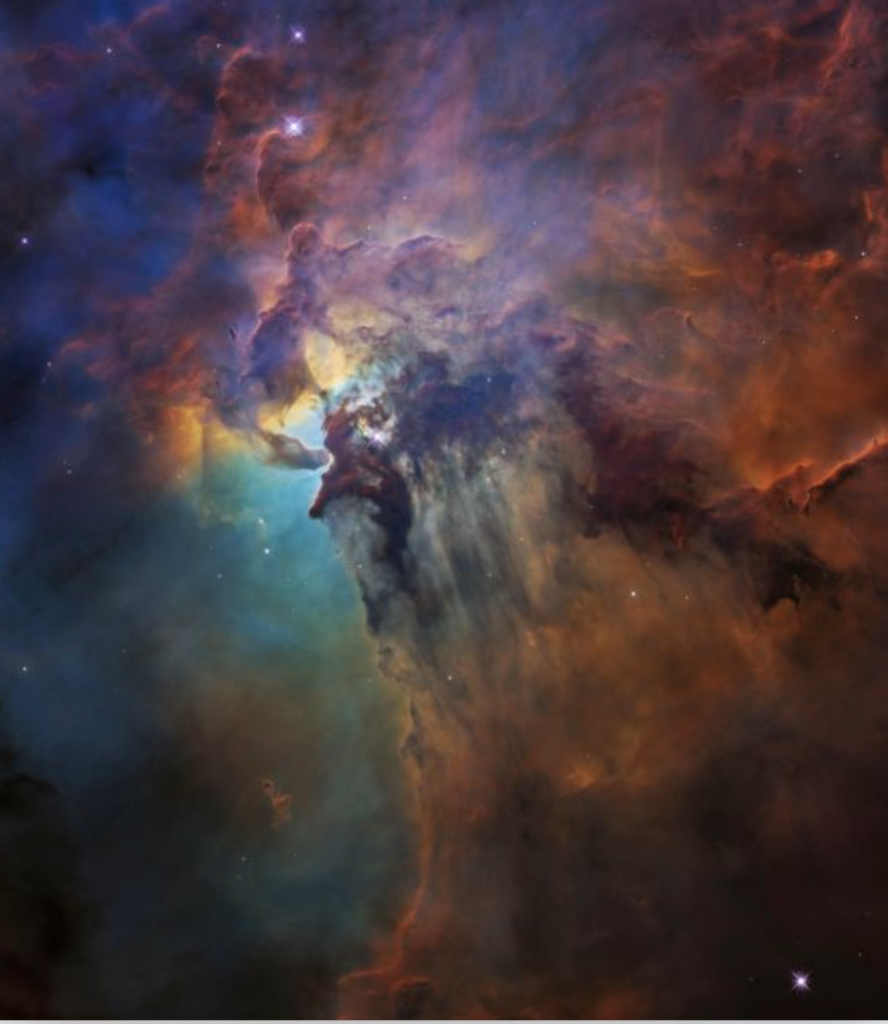 “This world is always working against a sense of honor, cleanliness, integrity. “Yoel Romero

As more and more claims about James MacDonald’s apparent use of the church coffers to benefit himself, many sensed more would be coming. That happened last week on this blog. I had heard that MacDonald seemed to be quite the generous spender, buying cars, motorcycles, Rolexes, etc for his BFFs and for those he wanted to influence for his benefit. He appeared to have been quite successful in his efforts until he started ticking people off.

I had heard rumors about the *vintage* VW Beetle he purchased for Ed Stetzer.  I was even given the license plate number. However, when I heard that it was alleged that James MacDonald was running around handing out gifts on the church’s dime, I knew it had to be investigated.

Mark Galli appears to think that it’s just fine for Ed to accept the donation of a VW Beetle and to also be a contributing editor of Christianity Today.

However, what startled me was, after Stetzer’s acknowledgment of having received this gift and recently reimbursing the church for the gift, was Mark Galli, of Christianity Today, saying that Edf Stetzer was no journalist at CT, merely an unpaid  contributing editor running a section and writing a blog (might I say with lots and lots of blog posts) and so it was okey dokey for him to get a car because all he did was make a call on behalf of MacDonald. (Now that was one heckuva run-on sentence.) Except, CT paid Wheaton $15,000 (Ed works there) to reimburse them for Ed’s salary portion. So, in fact, they were paying him something, weren’t they? Call me stupid…

When I raised this issue with Galli, he said, “Stetzer is not on staff with CT; he blogs, and some of his blogs appear on CT. He’s not a journalist, he’s a writer—but he’s independent of CT and is not accountable to CT.” Galli added that Stetzer does not receive any money from CT and his title of “contributing editor” should be seen in that light.

“Galli told me about a month ago that Stetzer had arranged the October 31stconversation between MacDonald and CT deputy managing editor Jeremy Weber. That conversation resulted in CT publishing MacDonald’s article . . . entitled, ‘Why Suing is Sometimes the Biblical Choice.’”

However, Galli later admitted that CT pays the Billy Graham Center a fee for Stetzer’s regular contribution to the media outlet. Also, Stetzer doesn’t just write blogs for CT; he manages one of eight special sections on CT’s website called “The Exchange with Ed Stetzer.”

What’s more, Stetzer’s close relationship with MacDonald played a role in CT’s recent coverage of the Harvest debacle. Galli told me about a month ago that Stetzer had arranged the October 31st conversation between MacDonald and CT deputy managing editor Jeremy Weber. That conversation resulted in CT publishing MacDonald’s article defending his lawsuit against me and four other defendants, entitled, “Why Suing is Sometimes the Biblical Choice.”

Wade Burleson spoke out against gamesmanship inherent in the gift of the car.

Apparently, I’m not the only one who doesn’t get Mark Galli’s *explanation* aimed at those of us who are a bit concerned about ethics…Wade Burleson wrote Boys and Their Toys: Understanding the Southern Baptist Convention’s Celebrity Leadership Politics

In 2005, I realized that my friends, those Bible-believing conservatives who served beside me, were as guilty of fraternization, patronization, and celebritization as the moderates of the 1960s and 1970s.

I fell out of favor for exposing the system.

Indeed, the SBC is a “good old boys” network.

Wade attempted to warn the SBC about James MacDonald.

When James MacDonald petitioned to join the Southern Baptist Convention, his style of leadership did not find a friend in me.

I tried to warn the SBC.

But James quickly became a part of the “good old boy” system.

He became an SBC leader immediately.

James MacDonald knew how to play the game.

The Christian Post reported today that James MacDonald gave Southern Baptist leader Ed Stetzer “just under $13,000” in the form of a 1971 VW Beetle.

Except for the fact, Southern Baptist Ed Stetzer went on to become a contributing editor for Christianity Today,and according to the Christian Post:
“…arranged a conversation (between MacDonald and CT Deputy Managing Editor Jeremy Weber) that led to the magazine publishing MacDonald’s article defending his lawsuit against her and four other defendants, titled “Why Suing is Sometimes the Biblical Choice.”

He has also accused me of the same thing but that is a subject for another time. Bear with me here. The following screenshots come from the comment section of Wade’s post.

Wade proceeded to call out Mark Galli for the abusive post which bullied Julie Roys on the pages of Christianity Today.

This comment by Wade is an example of why I’ve appreciated him through the years. He gets abuse and there is no question in my mind that Galli, influenced by others, allowed an abusive Op Ed to be posted in CT by MacDonald. 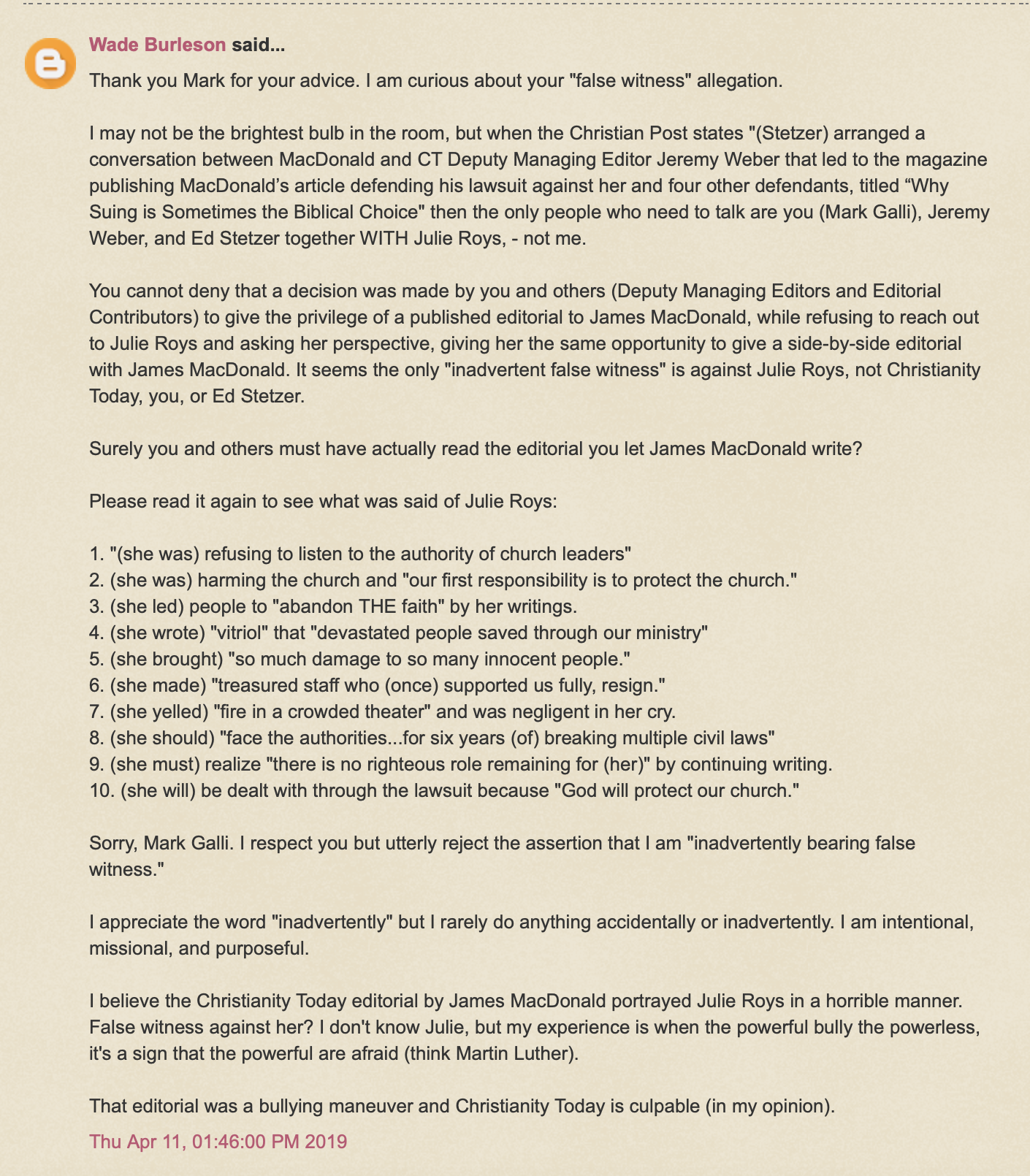 Mark Galli appeared unable to understand the crux of the argument. He claimed that MacDonald was merely arguing theologically. I say he was unfairly abusing a woman.

I am stunned that a man in his position doesn’t see that the OP Ed was a bully pulpit that he, Weber and Stetzer allowed or encouraged to happen. I wonder if that was allowed because Julie is a woman and not part of the celebrity circuit they run in. Why do I think they would not have allowed such a post to be written about one of their inner circle of male friends?

To make matters worse, Galli appeared to claim that Burleson didn’t do his own *independent* research. If Mark is reading this, I hope he hears this loud and clear. There is no one who is more independent and looks at things in his own way than Wade. His advice appeared a bit condescending to me. 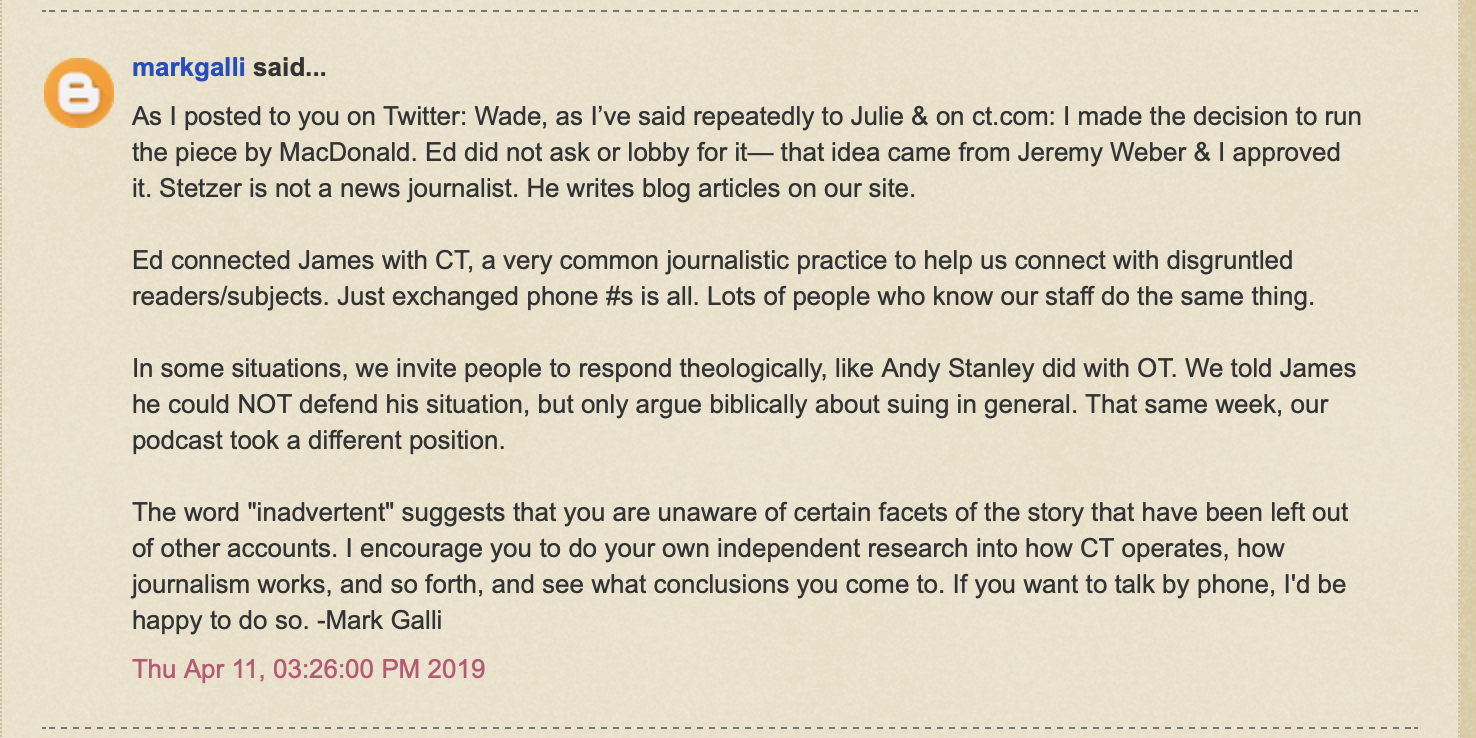 Wade, once again, was far more gracious than I would be but reiterated the point that Ed connected MacDonald to CT which published the abusive post about Julie Roys. 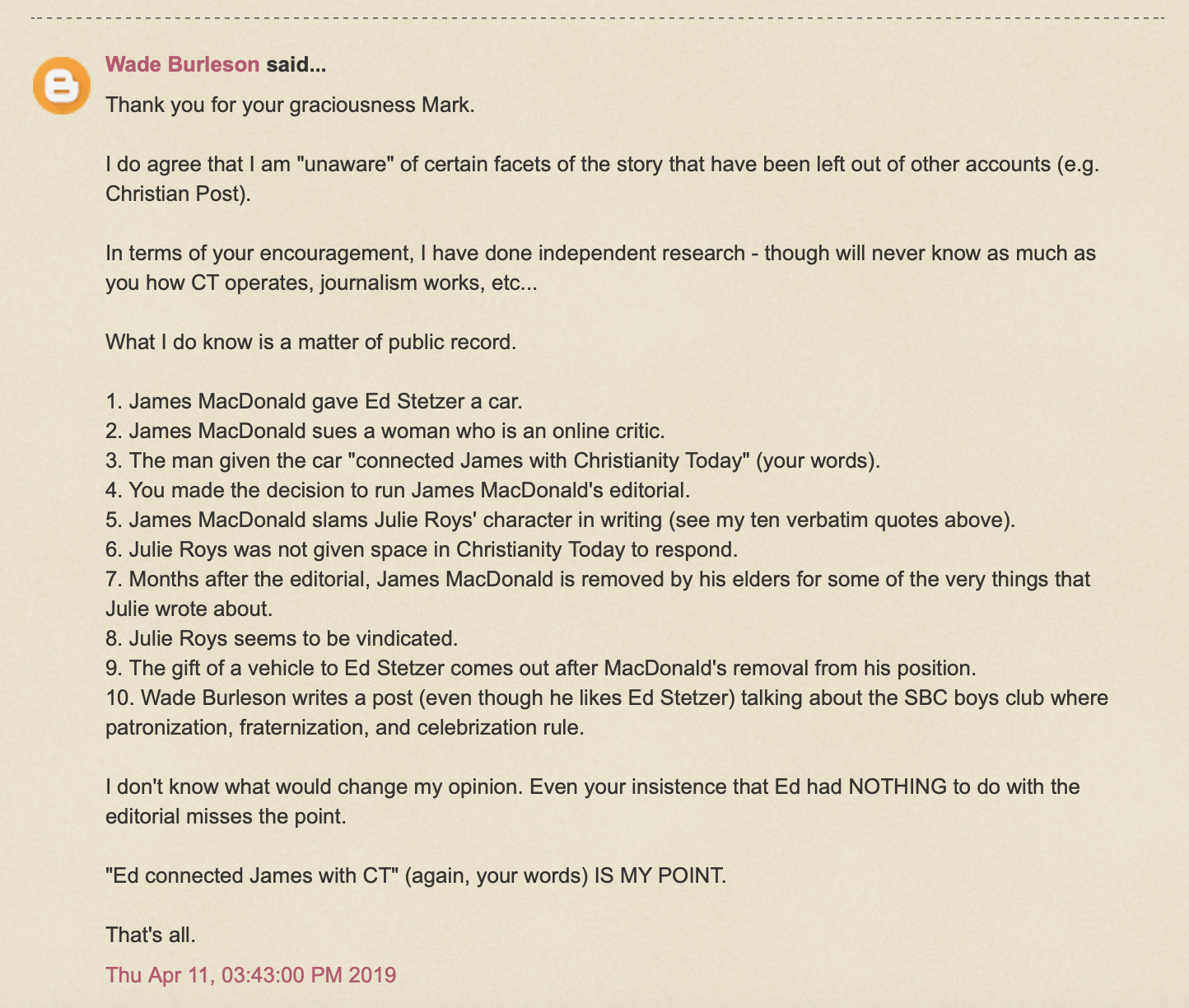 Mark Galli made a stupid joke obviously not understanding that he wasn’t getting just how serious Wade was about this subject.

Wade attempted one more time to help Galli understand how this looks to people outside. 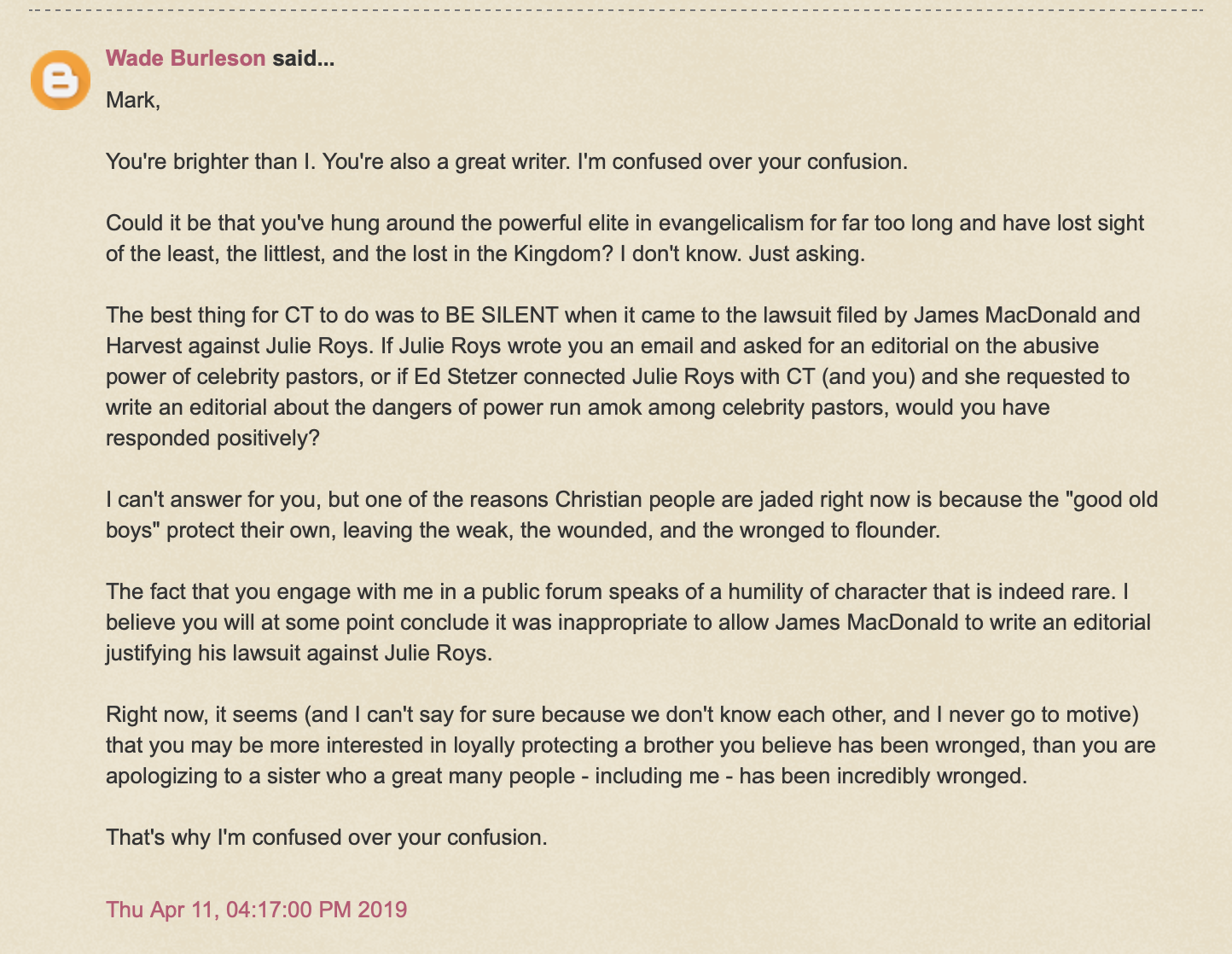 At this point, Galli encouraged Wade to call him sometime. I joined in the conversation because CT had not returned my call and I have since reached out to him via email.

However, there are two more comments Galli made which continued to demonstrate his inability to understand how this could look to people.

He appeared to reiterate that MacDonald’s Op Ed was merely a theological treatise. It wasn’t! It was abusive and called out incidents that MacDonald claimed happened without any proof.

He signed off poorly.

Galli should apologize to Wade but that sort of thing doesn’t usually happen when someone digs in this hard. It looks like the fix is in. Julie Roys got kicked in the butt by an ill advised OP ED;  there seems to be no apologies for the OP ED from *the Chief*; and it look like there are many ways to do a work around when it comes to gifts. 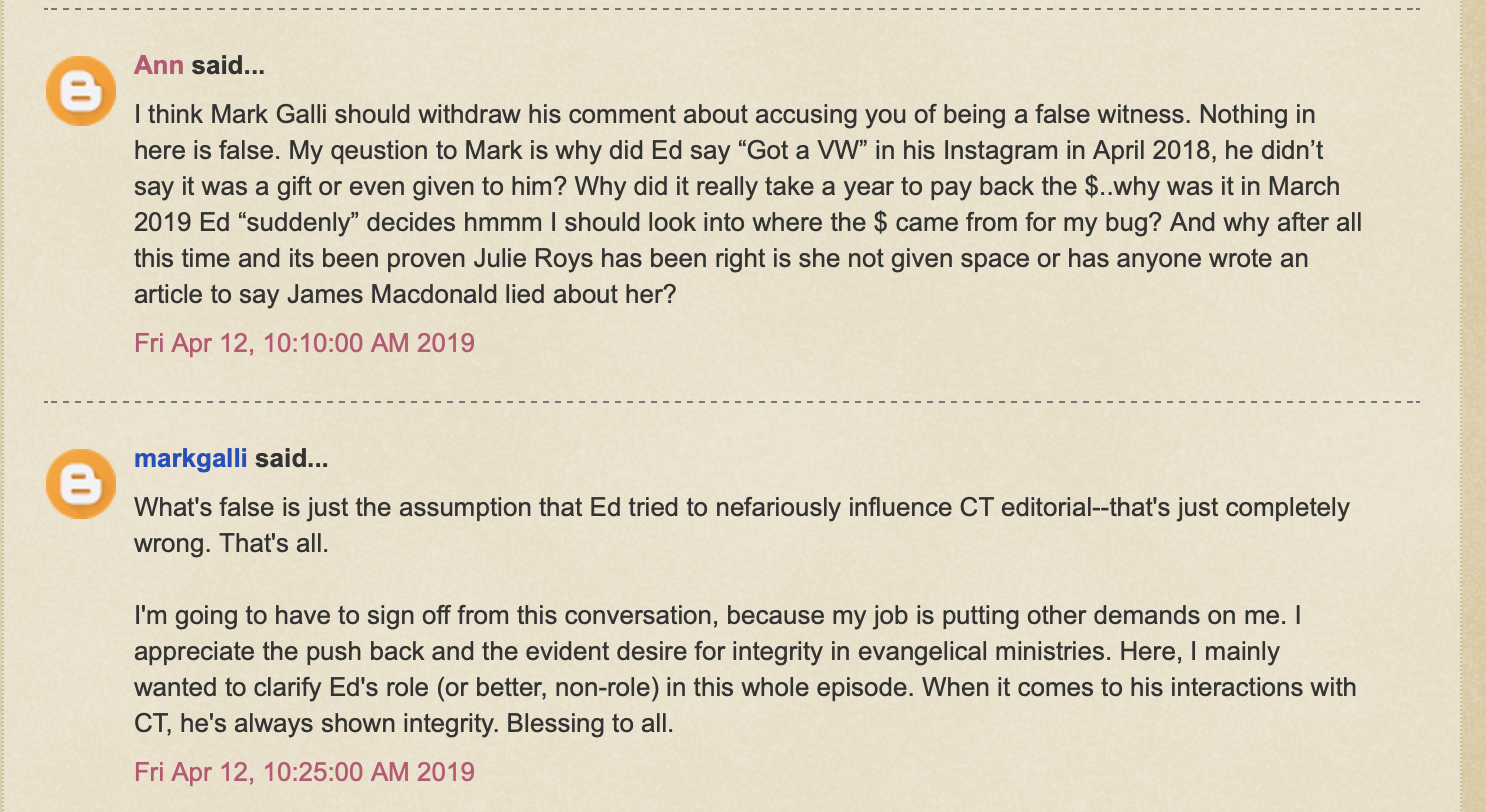 Given the current state of affairs at HBC, it does not surprise me that this has happened. It now appears evident that James MacDonald used money in the church coffers (WITW for example) to pretend he was a generous gift giver. This means that money given by individuals to go to certain ministries within the church may have not been used for those ministries unless people gave money for the purchase of motorcycles, Rolexes, etc to be given out ad lib.

Harvest Bible Chapel Lawsuit went live today. At this time, the folks behind the website will remain anonymous. That will change in the future. Here is how they describe the lawsuit.

The 7 elders below were given an opportunity to step down and avoid this lawsuit. This comes after several calls from other people including members and deacons of Harvest Bible Chapel, for them to resign immediately, citing that they are disqualified as elders. Instead, they have chosen to remain on the elder board and continue with the deep-seeded corruption and fraud that has plagued Harvest Bible Chapel for many years. You can read about the continued corruption and fraud here: Dan George’s Resignation.

Dan was a part of this elder board with these 7 elders and he details only some of the fraud and corruption that these elders continue to engage in. These disgraced elders are the ones that led Harvest to this current devastation. They arrogantly refuse to step down and allow new leaders to come in and run harvest. These elders and all the past elders and staff responsible for this abuse and fraud will be held accountable.

People who wish to be a part of this lawsuit or to give testimony for the lawsuit can CONFIDENTIALLY contact those involved in the website.

Needless to say, I think this is a great idea… I think the church should refund the money of people who believe they were deceived into how that money would be used.  I also hope that such a lawsuit might force the leadership of the church, both past and present, to open up the financial books of the church since it appears there are some still there that know money was used to purchase cars, motorcycles, Rolexes, etc.