When politics and religion are intermingled, a people is suffused with a sense of invulnerability, and gathering speed in their forward charge, they fail to see the cliff ahead of them. –Frank Herbert 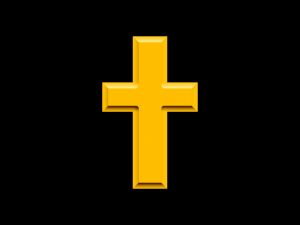 On Wednesday, Lord willing and no further encounters with out of control motorized grocery carts, I plan to post a story about a pastor who groomed and molested a student and went to prison. He is once again serving as a pastor and I had a chance to speak with him. As you know, I am opposed to pastors who have affairs or molest others returning to the pastorate. I am telling this story because an incredibly brave woman who has experienced much pain through the years. I am also going to be pointing out two pastors who have been this woman’s greatest advocates!

I had a disturbing weekend on Twitter and I want to speak to a few issues. It all started with this tweet.  However, the timing of this message was the day before Justice Kavanaugh was confirmed. 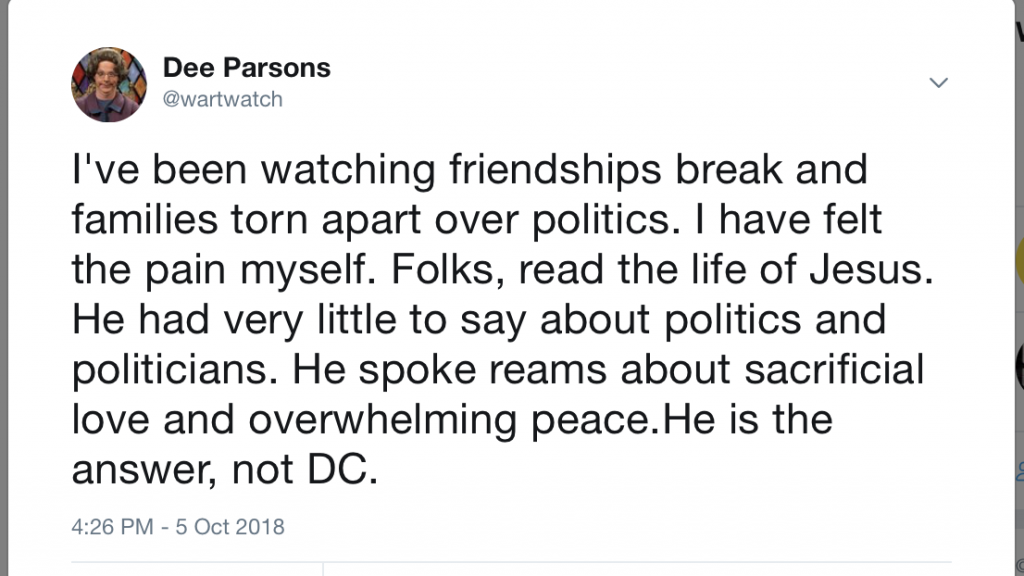 When I wrote this tweet, I was thinking about the last two years and how friends and families have been torn apart. It has happened with the Deebs as well as friends of ours.

Why we won’t discuss politics on this blog.

The tweet was then interpreted by some as a political expression of support for the White House and for Judge Kavanaugh. It wasn’t. I have my opinions on those subjects but I am not going to discuss them on the blog. Most of my critics had Twitter accounts that I had never seen on my Twitter timeline before.

I was called a hypocrite by one person because I won’t discuss Kavanaugh’s rape history. (Their terminology, not mine.) Others claimed that I must make a stand against Donald Trump and his sexual abuse. If I don’t do this, my entire 9 1/2 years work on the church and abuse is illegitimate.

Years ago, I attended a political meeting which was called to support candidates from a political party. I have been both a Democrat and a Republican so don’t assume on this one. At this meeting, some Christians were bad mouthing the non-Christians at the meeting because *those people* didn’t see things the way that Christians did. I announced that “this was not another Bible study and this gathering involves people from a broad spectrum of beliefs and practices who want to help.”

In the moment, I resolved to make my life about caring for the lost and let down and to step away from politics. I still care about the issues and I do vote my conscience. But one thing was for sure. I was not going to allow politics to come between others and me.

Politics has been a place of acrimony and ugliness in the last 2 years. I wish, really, really wish, that I could speak to issues in the political world that involve abuse. I can’t. Everything one says is judged by the political plumb line. If I say something that involves someone from one side, I become the punching bag by those on the other side. If the sexual abuse involves a politicized candidate, it has become near impossible to have a thoughtful discussion. Here is one tweet I received. I have removed her name because, at one time, I thought we were friendly. However, friendliness today is contingent on me taking a side. 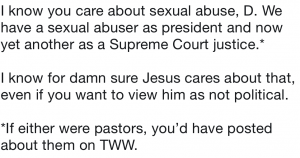 Do we post every abuse story that we receive and are all sex abuse claims true?

Quite simply, no. This answer is not pointing to anything political. We have been doing this blog for 9 1/2 years and learning as we go. We evaluate the stories that we receive based on our experience. If we decide not to go with a story, we are not making a judgement on whether or not the story is true. We simply do not feel comfortable. We know that only 4-7% (more or less) of sex abuse claims are not true and that is why we believe most stories.

For example, in 2010, we received an email claiming that Paul Pressler had a history of abuse. The email was from anonymous sources who wanted us to write about it. They refused to come forward with their names or provide any documentation. I was unable to find any information online at that time so we didn’t write the story. That situation changed this year with the filing of lawsuits against Pressler.

In another situation, there seemed to be quite a bit of information but there was a problem with the individual who told us the story. We felt distinctly uncomfortable but we couldn’t put our finger on it. We decided not post and within 2 months, we received information that strongly indicated that the charges we’re fictitious.

The mixed motives in politics

In those 4-7% of sex abuse claims that are proven not to be true, there are usually hidden motives involved. That motive can be a mother wanting custody of her children at all costs. The reason can be for someone who wishes to harm a boss who fired them.

Sadly, politics also provide the forum for mixed motives. (If people claim that I am making a statement here about the Kavanaugh situation, they are wrong.)  I grew up in a home which revered the Kennedys. My father had a small shrine to Jack and Bobby Kennedy in his office. Yet, when Teddy drove Mary Jo Kopechne off a bridge in Chappaquiddick, no one blinked an eye in the political circles in Massachusetts. Seriously?

Politics provides an avenue for mixed motives and that has concerned me for decades. That is the reason why we decided not to discuss situations related to politics on this blog. If someone feels like it should be the focus of a blog, she should start her own.

Therefore, we will delete any comments that attempt to prove, one way or another, why so and so should be believed.

Jesus was not a politician.

I was stunned that this was such a controversial statement. One person tweeted:

Other comments said I hadn’t read my Bible and that the life of Jesus involved specific political activity.

Here’s the problem. Jesus does care about the lost, poor, and broken. However, He disappointed his disciples because they would soon discover that He did not come to give the Jews political victory over the oppressive Romans. Let’s consider some verses and thoughts.

Am I saying not to serve the poor, the let down, and the sick? What is Jesus driving at with all of us?

Of course not. Matthew 19:21-22 tells us we are to do so. In fact, Jesus says something quite astonishing, and if truth be told, discouraging for all of us.

Jesus answered, “If you want to be perfect, go, sell your possessions and give to the poor, and you will have treasure in heaven. Then come, follow me.”

22 When the young man heard this, he went away sad, because he had great wealth.

Think about it…How many of you are willing to give it all up? How many of you can? Why haven’t more of us given all our stuff away? I sure haven’t. Or is that really the point of this?

Jesus was pointing us to the Cross.

Jesus was challenging all of us to understand ourselves and others. None of us is perfect. I sure haven’t given it all up in seeking perfection in the eyes of Jesus. Even if I had,  would I be perfect? Couldn’t I give all of my possession up and still be mean spirited and cruel towards others?

I contend that the 3 year ministry of Jesus was designed to help us to understand the depths of our problems and then to show us what our problems meant for Him. A former pastor said it this way.

He brings a message of hope that is centered in himself.

This same pastor often would post the following picture on the overhead. 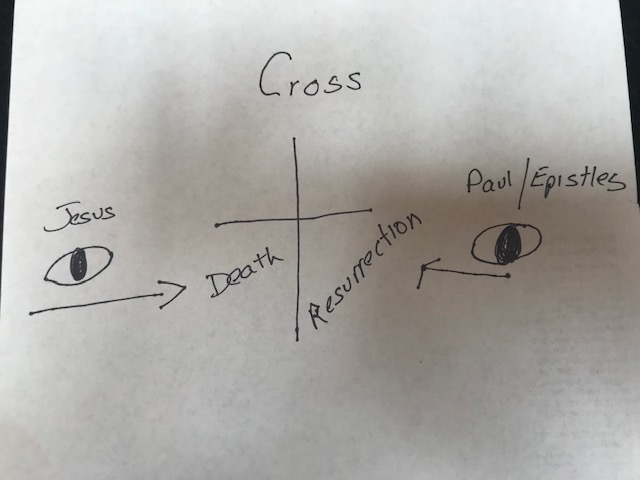 Do you really want to understand Jesus? You need to understand why He came! Everything He did during those 3 short years was designed to point us to our need for the Cross. Now, take a look at the other side of the Cross from the perspective of the Pauline epistles. Paul pointed back at the Cross as the running thread throughout  his writings. He sums it up in 1 Corinthians 15.

When I became a Christian, Jesus gave me His Spirit. The Spirit is what convicts me to care for the victims of human trafficking. That Spirit is what caused my husband and me to choose to spend two years on the Navajo Reservation as opposed to my husband taking a cushier job in order to pay back to the government for his schooling. It is what caused me to tutor low income children. It is what made my heart care for those abused in the church. However, none of these activities solved my problem. Only Jesus could do that.

I have decided to spend my time focusing on changing things inside the church. I am terribly grateful for those who believe that Jesus has called them focus on politics. However that is not what this blog is going to do.

To those people who claim I don’t know my Bible when I say Jesus was not a politician, this is my response. You may disagree with my conclusions but I hope you can see that I have deeply considered this issue.

Finally, to the person who said that “Jesus is her f****** political role model,” I would suggest doing a bit more reading…