“We are not to simply bandage the wounds of victims beneath the wheels of injustice, we are to drive a spoke into the wheel itself.” ― Dietrich Bonhoeffer 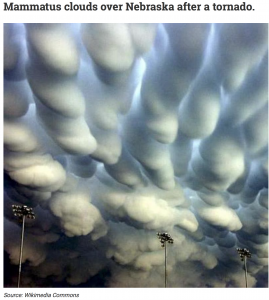 I believe that any pastor who has sex with a member of his congregation or ministry is disqualified, permanently, from the pastorate. He/she may be restored to the church but not to the pulpit. I also believe that such actions on the part of a pastor/leader constitute clergy abuse and is an abuse of power.

Before I get to those tweets, the Christian Post referred to a blog post in August that Tchividjian wrote with Chad Bird.

“That doesn’t justify destructive behavior, diminish the sting of consequences, or minimize the harming effects of destructive choices. But if we’re only okay with preaching grace in theory, but not when someone — even an esteemed leader — is actually in need of it, then perhaps we should all take a sabbatical. As someone once said, ‘People love it when preachers say they are broken just like the rest of us, until that preacher does something that the rest of us broken people do.'”

The authors added that even though celebrity pastors are the ones who make the news when they are involved in a scandal, many other smaller preachers also fall into sin.

These were my thoughts on the matter. Tullian Tchvidjian and a Lutheran Response

Here are screen shots of the current five tweets which give us an insight into his thinking. In these tweets, I contend that Tullian comes across as an inconsiderate egoist who refuses to take full responsibility for what he did. He exudes a lack of repentance and understanding. Read the tweets and see if you can surmise what is lacking from his selfish pity party. (Whoops-did I give a hint?) 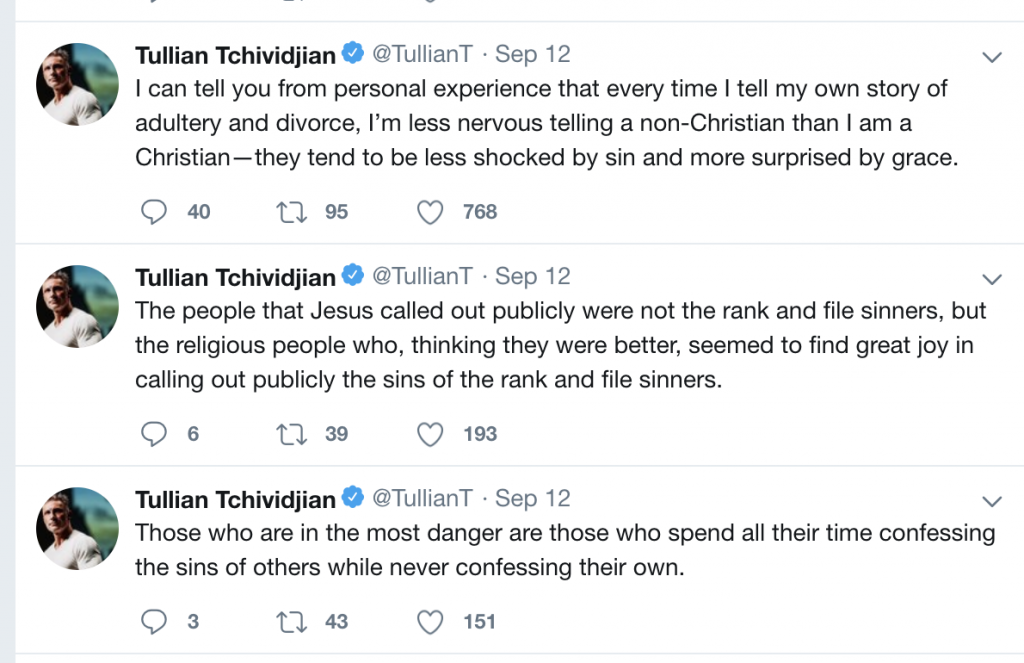 He claims he was bitter and angry.

Let’s go back to the past and remind ourselves that Tchividjian had numerous affairs with women while he was still a pastor. This means he violated his office in order to engage in multiple liaisons. He also tried to blame his first wife Kim as the one who had an affair, causing him to have an affair. It was *that woman’s fault.* In fact, he had been having affairs prior to his wife’s affair.

Tchividjian’s liaisons are an example of clergy sex abuse. Yet he wants us to believe that he should be angry and bitter. Did he mention the pain of his many victims? Did he say he went to each and every one of his victims, their spouses and their families to beg for forgiveness? Not only did he not mention his victims, he doesn’t mention that he decided to marry one of his liaisons, Stacie. Stacie, the woman who called Mrs. Kim Tchividjian to let her know that Tullian was sleeping with her. I wonder….did Stacie know she was merely one among many?

Tchividjian was defrocked by the PCA for his despicable behavior. That means the PCA does not believe that Tullian belongs anywhere near a pulpit. If he had been a counselor and had had those affairs, he would have been stripped of his license and never be allowed to counsel again. Isn’t it interesting that Tchividjian has lower standards than secular counselors? Tchividjian, demonstrating that he doesn’t have a pastoral bone in his body, is bitter and angry. He expressed absolutely no concern for the women and their families.I t’s all about his *feelings.* Poor baby…

Tweet #2: His dark past continues to haunt him and he has found a way out.

Does TT demonstrate an understanding of the pain that has been caused to his victims and their families? Does he ask for forgiveness from his victims as a way towards healing? Nope. He takes the cheap way out. He declares God has unconditionally forgiven him.

This is rather clever because God does unconditionally forgive those who come to Him in repentance. However, that does not mean there are no consequences for those actions. Here are two:

But he did not go to the families and begged for forgiveness. He also believes that he should be preaching, even though his former denomination told him “no.” So, he finds someone…anyone…in any denomination who will allow him to preach. Sadly, his new BFF is merely spraying cologne on a skunk.

I don’t believe his past is haunting him. I think it is the Holy Spirit convicting him. Until he does the right thing, he will be haunted.

Tweet #3: Non-Christians don’t seem to get all upset about his multiple affairs, divorce, and remarriage.

I have a bunch of nonChristian and Christian friends who claim all sorts of things are just hunky dory until it is worded specifically. What does that mean in the case of TT? He should ask his non-Christian friends what they would think of a counselor who had multiple affairs with his client. He should then explain that he thinks that counselor should be allowed to get his counseling license back since “God has forgiven all.” Never forget, the #metoo movement was fueled by nonChristians who knew that it wrong for producers to seduce their actresses.

I wonder how TT’s friends feel about Harvey Weinstein, Bill O’Reilly, Les Moonves, Matt Later? I wonder if TT’s friends give them a pass? I bet not. TT and Stacie are living a lie. They have hurt many people. Stacie has a past as well.

Sadly, TT is now hitting the circuit, preaching cheap grace- a grace devoid of repentance, reparations and seeking forgiveness from those harmed. It is a cheap grace.

Here are some quotes from The Cost of Discipleship by Dietrich Bonhoeffer. This is the best book ever written on the issue of cheap grace-something that TT should think about. These quotes come from Dietrich Bonhoeffer: Cheap Grace vs. Costly Grace

-Cheap grace is the deadly enemy of our Church. We are fighting today for costly grace. Cheap grace means grace sold on the market like cheapjacks’ wares. The sacraments, the forgiveness of sin, and the consolations of religion are thrown away at cut prices. Grace is represented as the Church’s inexhaustible treasury, from which she showers blessings with generous hands, without asking questions or fixing limits. Grace without price; grace without cost! The essence of grace, we suppose, is that the account has been paid in advance; and, because it has been paid, everything can be had for nothing….

-Cheap grace means the justification of sin without the justification of the sinner. Grace alone does everything they say, and so everything can remain as it was before. ‘All for sin could not atone.’ Well, then, let the Christian live like the rest of the world, let him model himself on the world’s standards in every sphere of life, and not presumptuously aspire to live a different life under grace from his old life under sin….

-Costly grace is the sanctuary of God; it has to be protected from the world, and not thrown to the dogs.

-It was the grace of Christ himself, now prevailing upon the disciple (Peter)  to leave all and follow him, now working in him that confession which to the world must sound like the ultimate blasphemy, now inviting Peter to the supreme fellowship of martyrdom for the Lord he had denied, and thereby forgiving him all his sins. In the life of Peter grace and discipleship are inseparable. He had received the grace which costs, (pg. 45-49).

The following quote sums up the entire book:

“When Christ calls a man, he bids him come and die.”

Sadly, what I see from TT is a demand from him for all of us to forgive him, whether or not he demonstrates true repentance. We are to allow him to be a preacher again because it’s his right. For him, restoration means more than merely being restored to Christian fellowship. He is Billy Graham’s grandson and that means he is entitled to be a preacher. It means he gets to marry the *babe* and start making a paycheck as a celebrity pastor. He is entitled to write books and speak at conferences. After all, he is Billy Graham’s grandson and don’t you forget it. He won’t let you.

It must be hard for TT to accept that some Christians actually understand the juxtaposition of the Law and the Gospel. He has a hard time believing that some thoughtful, Christian people will not buy his baloney. Some of us out here actually read the Bible instead of a few, select proof verses.

Tweet #4: TT has no idea that this verse is speaking about him!

TT doesn’t seem to understand that Jesus called out the religious leaders. They were the ones causing pain for the rank and file by making up thousands of rules that were impossible to to keep. For example, one could not spit on the ground on s Sabbath because a plant might grow and one must not work on the Sabbath.

One should be careful not to spill any liquid or even to spit on plants on Shabbos. [12]

TT is an example of the religious leaders who cut themselves slack while supporting harder laws for the little guy. So, for example, as a counselor, TT would have lost his license to practice. He did lose his ministerial credentials from the PCA but he doesn’t have to worry about that. He just moves on to the next denomination with some loosey goosey pastors who think it is cool that he is Billy Graham’s grandson. They don’t pay attention to the Law and what it is meant to do.  He gets himself declared him *restored* and it’s back to the circuit. “TT…Jesus is speaking about you and to you. You position yourself as a religious leader.”

Tweet #5: Tullian states that there are some who should be confessing their own sin and ignoring his.

You are a leader and you need to act like one. Those called into those roles have a greater standard to carry. You don’t get to act like you are just *one of the guys.* Read the Bible. It tells you that. You get critiqued because you wanted the limelight. You used your Billy Graham connection to get the perks you were seeking.You now are upset because the public notoriety that your sought so desperately now holds you to account.

Frankly, I wish Tullian would shut up and go work in an impoverished part of the world for a few years. Then I might listen a little harder to his excuses.