“After listening to the three-plus hour interview with Dr. Davis my feeling is she had little impact on creating doubt about the credibility and validity of the testimony of the victims in this case.”

Our friend Todd Wilhelm is continuing to post about the Tom Chantry trial. We are grateful that he is in court each day and posting details of the legal proceedings; however, we understand that in certain corners of Christendom, reading the information Todd posts is highly discouraged. One has to wonder why…

There has been some interesting commentary regarding Todd’s posts, and Day Nine was no exception. Here are two comments that caught our attention.

We are grateful that some who are following Tom Chantry’s trial are asking very important questions. Keep the questions coming…

Here is what Todd Wilhelm had to say about Day Nine of the court proceedings. We applaud Todd for devoting so much time and attention to what is occurring in the courtroom and disseminating pertinent information to those of us who could not be in attendance with him. 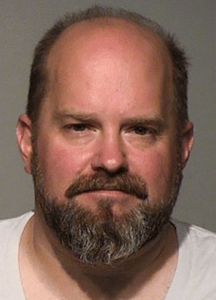 The court session picked up with the video of Dr. Deborah Davis, an expert witness on memory. We had about 2 hours 45 minutes left to watch, having started watching late in yesterday’s court session.

Dr. Davis was a witness for the Defense. As such, John Sears was utilizing her testimony in an attempt to undermine the testimony of the victims who have testified in this case. Dr. Davis talked of “Infantile Amnesia.” She is of the opinion that children generally are unable to remember anything prior to age 3 or 4. She further stated that as adults we generally are unable to remember anything before the age of 10.

When Susan Eazer cross-examined Dr. Davis she was able to restore some sanity to the conversation. The first thing Ms. Eazer did was to highlight the fact that Dr. Davis is a hired gun for defense attorneys. Dr. Davis has testified as an expert witness in approximately 150 cases. Of those 150 cases she has testified in, she has testified for the State a total of 1 time!  Ms. Eazer than asked Dr. Davis about her fee structure.  She charges $3,000 per day, $1,500 for a half day, or $300 per hour. Additionally, she charges $100 per hour while traveling, plus expenses. When asked how much she was charging John Sears for her services, she said $3,000.

In my opinion, Ms. Eazer did a good job of neutralizing the testimony of Dr. Davis. Her questions were direct and specific. When she asked a question that required a yes or no answer Dr. Davis would initially work to avoid the simple answer, preferring to get into a long-winded explanation. Ms. Eazer would shut her down saying that was not the question and then restate the question and ask for a yes or no answer. Dr. Davis was clearly frustrated by this, several times rolling her eyes. It was obvious it pained Dr. Davis to not be in control of the conversation.

Eazer quoted from Dr. Davis’ writings regarding trauma in child sexual abuse. Dr. Davis is of the opinion that unless there is violence or sexual penetration involved in the abuse it does not meet her clinical definition of traumatic. Eazer asked Dr. Davis asked how many sexually abused children she has interviewed. Her answer – zero! I thought this really damaged the credibility of Dr. Davis. My thoughts of her are that she is a scholar who has spent her entire 40-year career in the ivory tower of academia talking with like-minded peers, none of whom have any real-life experience with the working class.

Susan Eazer was able to get Dr. Davis to grudgingly admit that it’s possible that a 3-4-year-old child may be able to recall being sexually molested, that it was highly unlikely but possible. Likewise, she admitted that an adult who was sexually molested at 8-10 years of age could possibly remember that experience, but not with any great detail.

After listening to the three-plus hour interview with Dr. Davis my feeling is she had little impact on creating doubt about the credibility and validity of the testimony of the victims in this case.

I looked up student’s ratings of Dr. Davis and the one below accurately depicts my thoughts of her.

Next, the Defense called Pastor Don Lindblad to the witness stand. John Sears established the facts that Pastor Lindblad has been a pastor for 46 years, the last 25 he has been pastor of Trinity Reformed Baptist Church located in Kirkland, WA. His church was a founding member of the ARBCA in 1997, and he is one of the top leaders in ARBCA.

John Sears led Pastor Lindblad through a sanitized, obviously well-rehearsed recitation of his involvement with Tom Chantry which included the following:

The Chantry family asked Pastor Lindblad to attend the 2000 ARBCA investigation at Miller Valley Baptist Church as an advocate for Tom Chantry. As such, Pastor Lindblad sat in on all the meetings the 3-man investigative team conducted with Chantry.

Pastor Lindblad understood the purpose of the investigation was to bring about reconciliation between the Miller Valley Baptist Church and Tom Chantry by coming up with some recommendations to facilitate this.

In 2005 Tom Chantry contacted Pastor Lindblad concerning an email he had received from Victim 2. Lindblad contacted Victim 2 by email and eventually, a phone call was set up and took place on March 2, 2006. The phone call was a 3-way call between  Chantry, Lindblad and Victim 2. The call lasted approximately 20 minutes and Lindblad said nothing. Lindblad understood Victim 2 wanted an apology from Chantry. Chantry asked Victim 2 to forgive him for spanking him while tutoring him. Victim 2 thanked Chantry, Chantry wished him well in his future, bid him Godspeed and the phone call ended.

The Cross-Examination is where things began to fall apart for the ARBCA leader. Prosecutor Eazer came out with both guns blazing. She asked Lindblad series of rapid-fire questions about the purpose of the 2000 investigation, the 2006 phone call and then a 2009 email he received from Victim 2. Victim 2 felt the matter between he and Chantry had not been concluded in 2006 and wanted to speak with Chantry again. Lindblad responded to Victim 2 by saying Tom does not want to revisit the issue at this point in his life. Eazer asked him why, as a Christian, he would not want to speak with Victim 2? At this point, Judge Astrowsky stopped the proceeding and excused the jurors.

The Judge then admonished Pastor Lindblad saying he was intentionally evasive and non-responsive to Eazer’s questions. He told him if he did not understand a question he should state that, otherwise he needed to answer her questions. He then asked Lindblad to step down and leave the courtroom.

Judge Astrowsky then admonished Eazer for her question, “why, as a Christian…” He said bringing anyone’s religion into a question was inappropriate and he would be referring her conduct to the State Bar. He was also clearly upset with Pastor Lindblad’s conduct on the stand. He stated that if his evasive and non-responsive answers continue he would admonish him again and perhaps cite him for contempt of court and strike him as a witness! He said he would make this clear to Lindblad when he came back into the courtroom and John Sears said he would also speak to him.

Eazer told the Judge that her line of questioning was intended to impeach Lindblad for giving damaging, untruthful testimony.

Once court resumed Lindblad did marginally better answering Eazer’s questions. It was evident he was still not being truthful on several subjects, other times he grudgingly answered.

Eazer got him to admit that he knew the 2000 ARBCA investigation was about more than reconciling the two parties for some light spankings Chantry had administered during catechism class. He admitted that the ARBCA was investigating bare-bottom beatings administered to three boys with hand-crafted paddles, a boat oar and other instruments and Chantry then rubbing their bare butts.

Eazer stated to Lindblad that you were very well aware of what Victim 2 had said. Lindblad said “yes.” And you were aware that the allegations against Chantry were a bit more serious than administering a spanking during a catechism class. Lindblad said “correct.”

Eazer then introduced Exhibit 65, a letter Victim 2 had written to Lindblad. Eazer said, “You knew Tom had beaten [Victim 2] with his pants down and rubbed his bottom.” Lindblad said “yes.”

Eazer got Lindblad to admit that he strongly supported Tom bringing his church into the ARBCA and was not happy that Miller Valley Baptist Church was opposing it.

Eazer drilled Lindblad on a statement he had made in an interview with her where he said, “We (ARBCA) believe the charges were not true.” Eazer asked Lindblad if ARBCA would take that position today. Lindblad said “yes.”

Eazer then introduced Exhibit 76 and asked Lindblad if he went to other ARBCA churches to tell them “what was fact and fiction in the Chantry case.” Lindblad responded “no.” You don’t remember saying that? Lindblad said “no.” Eazer was looking for the place in the document where Lindblad said that and then the Judge brought the trial to a recess. I am sure she will confront him with the evidence once court resumes tomorrow.

Below is a comment from a reader of this blog that proves Lindblad did visit at least one church to spread the news that the ARBCA company line is that the criminal charges against Tom Chantry are not true. CRBC is Christ Reformed Baptist Church, the church formerly pastored by Tom Chantry. 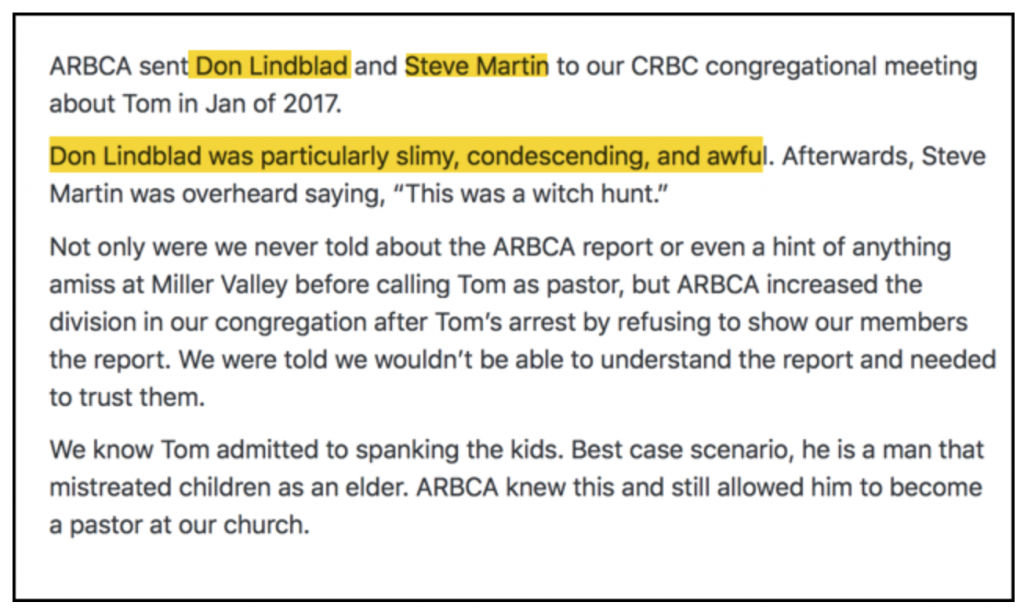 After the jurors were excused for the day Judge Astrowsky said he was going to reconsider referring Eazer’s conduct to the State Bar. He said he appreciated her response given in defense of her line of questioning. My personal opinion is the continued evasiveness of Lindblad on the witness stand may have played a part in the Judge changing his mind.

I have really not done justice to the exchange between Eazer and Lindblad. She asked many questions which I have not recorded where Lindblad attempted to artfully dodge the truth. He is clearly not used to having his word questioned. He concocts what he thinks are clever answers which may fly in a meeting with his church members, but don’t cut it in a court of law. Once the trial is over I intend to get a transcript of this session to let the world see the behavior of this “man of God,” one of the ARBCA’s most respected leaders!

Friday’s trial will resume with Susan Eazer cross-examining Pastor Lindblad. That will be followed by Tom Chantry taking the stand.