“Put your theological cards on the table in plain view for all to see, and do not go into a church [or convention meeting] under a cloak of deception or dishonesty. If you do, you will more than likely split a church [maybe even the SBC], wound the Body of Christ, damage the ministry God has given you, and leave a bad taste in the mouth of everyone.” 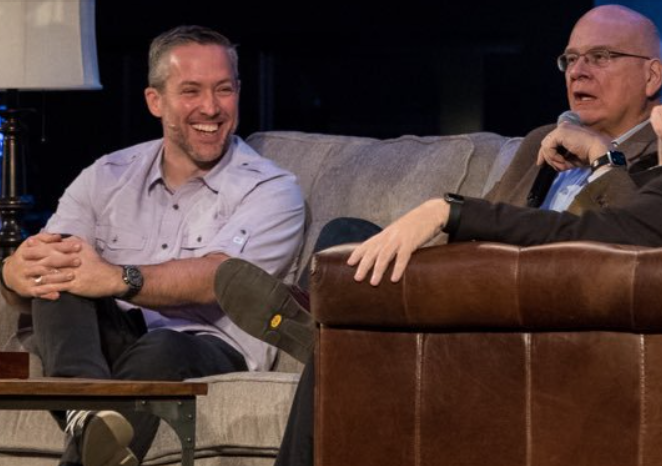 Well, after months of hype, the BIG VOTE for the SBC presidency will finally take place tomorrow. If you are planning to vote, please be advised that you should register early! I believe the presidential vote is scheduled in the early afternoon shortly after the lunch break.

The candidates are J.D. Greear and Ken Hemphill. I find it so interesting that both of these men are natives of North Carolina, and I believe they are both currently living in The Tarheel State. Their roots are a mere 90 miles apart. Greear was born in Winston-Salem and Hemphill is from Morgantown.

J.D. Greear pastors The Summit Church in the Raleigh-Durham-Chapel Hill area. This very large church (around 10,000 attendees) has nine campuses. In the interest of full disclosure, I have attended The Summit twice – once at the main campus in Durham and another time at the satellite campus in North Raleigh. My older daughter attended Greear’s church during her college years, so I heard quite a bit about J.D. back then.

The Summit is discussing the possibility of opening another campus in the Garner area. Based on my observations over the years, Summit leaders typically plant satellite locations in the vicinity of other conservative churches, and some degree of sheep shifting takes place. Sadly, some church youth groups get wiped out when The Summit sets up shop nearby. They want to go to the ‘hip’ church. Of course, there are some converts as the baptism number reflects, but I believe the majority that attends are already believers.

Greear’s church recently purchased land within a few miles of where I live to build HUGE facility (which will likely serve as its main campus). I can already hear the sucking sound coming from churches in its vicinity.

It’s been interesting to see all the media coverage regarding Greear’s candidacy for SBC president – from the local news (TV and newspapers) to the Indy Week Magazine, to the latest edition of Christianity Today (which arrived last week). I kept looking for the word ‘advertisement’ at the top of the CT article about Greear because I couldn’t find anything at all promoting Ken Hemphill. Perhaps I missed it??? Seems like equal treatment should have been in order…

This promotion of J.D. Greear in the news and on social media appears to be well-orchestrated. Even The Gospel Project leader’s guide has been promoting sermons by Greear of late. For Southern Baptist messengers who may be reading about this savvy 45 year old pastor and finding him to be impressive, I believe they should consider his theological leanings before casting their vote.

I have been researching Christian trends for nearly a decade, and here is some of the information I have come across regarding Greear and his church. Consider the following…

Shortly after we launched TWW, a conference was held in Raleigh called Advance. We were very much aware of this event at the time and began to take notice of the Christian leaders with whom Greear was associating. Conference speakers included: John Piper, Mark Driscoll, J.D. Greear, Ed Stetzer, and Eric Mason. You can view one of the sessions on the Desiring God website.

Notice the photo above, which J.D. Greear features at the top of his Twitter account. He is pictured with Tim Keller, a pastor in the Presbyterian Church of America and co-founder of The Gospel Coalition.

In addition, The Summit Church is listed in the 9Marks church directory.

There are a good number of articles about The Summit Church on the 9Marks website.

Greear joined Mark Dever and other Calvinists as a speaker at the 9Marks Conference held at SEBTS five years ago.

Unfortunately and to my great disappointment, The Summit Church played a significant part in bringing Mark Driscoll to UNC-Chapel Hill back in 2009. My daughter attended this Campus Crusade (CRU) gathering, and I wrote about it.

That same year (2009) Nathan Akin, Danny Akin’s son, interviewed J.D. Greear for Baptist 21 and asked a series of questions, which included the following: “Why do you network with Acts 29?” Acts 29 is a group of Reformed churches. It appears that The Summit Church is no longer affiliated with Acts 29. Does anyone know when Greear’s church pulled out of this church-planting network? I don’t believe it was that long ago.

Six years ago Greear wrote a blog post entitled “Pastor J.D. Are You a Calvinist?” A simple “Yes” or “No” answer would have sufficed…

When Greear was nominated for SBC president earlier this year, Eric Kemp published a post on his soteriology 101.com website entitled: “Is JD Greear a Calvinist?” It is definitely worth reviewing…

You can tell a lot about someone by investigating the books they read. Here are just a few of authors J.D. Greear includes on his Recommended Reading list –

John Piper (Desiring God, Let the Nations Be Glad, When I Don’t Desire God, Don’t Waste Your Life, Life as a Prayer, The Supremacy of God in Preaching, Dangerous Duty of Delight)

Mark Dever (9 Marks of a Healthy Church, The Deliberate Church)

Tim Keller (The Age of Reason, The Meaning of Marriage, Prayer, General Justice)

D.A. Carson (Scripture and Truth, For the Love of God)

Kevin DeYoung (Just Do Something)

One of the recommended books is entitled The Reformed Pastor

Please take the time to review this recommended reading list in order to discover for yourself that the vast majority of books Greear recommends have to do with Reformed Theology / Calvinism. I believe this is a very important indication of the direction in which the Southern Baptist Convention will be heading if J.D. Greear is elected SBC president. Can there be any doubt that 5-Point Calvinist Al Mohler, who 25 years ago became president of Southern Seminary, will be the puppet master? Look at the appointments that Mohler has influenced thus far – Kevin Ezzell, head of the NAMB, David Platt, head of the IMB, Jason Allen, Midwestern Seminary president, Russell Moore, ERLC President, Danny Akin, SEBTS president, etc. etc. etc. And Southwestern Seminary will likely be the next SB institution to be heavily influenced by 5-pointer Al Mohler. It does appear that what Mohler wants, Mohler gets, and the election of Greear to the SB presidency is no exception.

I’m not going to take the time to search for it now, but I do remember hearing an interview with J.D. Greear in which he reminisced about his wife and how when they were dating he was absolutely thrilled to discover that she is a Calvinist!

On another note, it hasn’t been that long ago that we heard of people joining The Summit who were clueless that it is a Southern Baptist Church. Was this not discussed in the membership classes? It is certainly downplayed on the church’s website and in the 2017 annual report. Check them out for yourself and see how infrequently the Southern Baptist Convention is mentioned.

It has only been during the last couple of years that The Summit has given generously to the Cooperative Program (CP). See screen shot below.

When Greear ran for president of the SBC the first time two years ago, CP giving suddenly increased. The side-by-side comparison above is with the church Ken Hemphill pastored in Norfolk.

Since the information regarding Hemphill has been limited (compared to Greear), here is some information for review.

Dr. Kenneth S. Hemphill is the former president of the largest evangelical seminary in the world.

Education:
Dr. Hemphill graduated from Wake Forest University in 1970 with a Bachelor of Arts in religion. During his years at that institution he was named twice to the All-Atlantic Coast Conference Academic Football Team, was listed among Who’s Who in American Colleges and Universities, chosen Phi Beta Kappa and graduated Magna Cum Laude. He went on to earn the Master of Divinity and Doctor of Ministry degrees from Southern Baptist Theological Seminary. His academic training then took him to Cambridge University where he earned his Doctor of Philosophy degree in New Testament in 1976. While there he studied under Professor C.F.D. Moule, the Lady Margaret Chair at Clare College, Cambridge.

Career:
Following his doctoral work, Dr. Hemphill began his teaching career on the faculty of Wingate College, Wingate, N.C. He then went on to pastor First Baptist Church, Galax, Virginia for four years, during which time he chaired the Education Committee of the Virginia Baptist General Board.

In 1981 he was called to the pastorate of First Baptist Church, Norfolk, leading that congregation in such extraordinary Sunday School growth that the Southern Baptist Sunday School Board awarded them three Eagle Awards. During his tenure there, Dr. Hemphill chaired the Norfolk Baptist Association’s Evangelism Committee and served on the Executive Committee of the Virginia Baptist General Board, the Southern Baptist Convention Resolution Committee and the Special Committee for Planned Growth in Giving.

Other Achievements:
In addition to his denominational involvement, Dr. Hemphill has been active in community relations, serving as chaplain of the Norfolk Cosmopolitan Club, member of the Committee on Gifted and Talented for the Virginia Beach Public School Board and Bible teacher for the Sunday Morning Bible Study broadcast on WTKR Radio, Norfolk.

Dr. Hemphill is also a prolific writer. Among his seven published books are The Antioch Effect, The Bonsai Theory of Church Growth and Mirror, Mirror on the Wall: Discovering Your True Self Through Spiritual Gifts.

Personal Notes:
Dr. Hemphill is married to Paula Moore Hemphill of Greenville, South Carolina. Paula is a talented conference leader and travels around the world speaking at various Women’s Events.
The Hemphills share a commitment to, and passion for home and foreign missions, having participated in partnership missions to Brazil, Kenya, the former Soviet Union and England. Together they have served in schools of evangelism and church growth for the Home Mission Board, targeting pioneer mission areas.

Another insightful resource (that includes the chart featured in the screen shot above) is J.D. Greear and Ken Hemphill ‘By the Numbers’.

I am grateful that Southern Baptists are praying fervently about this important ‘election’.

May God be glorified!