“In this difficult situation, the Executive Committee based its decision on the current performance of the president and did not allow the legacy of Dr. Patterson or the #MeToo pressure to steer the outcome. We did not react; rather, we decisively exercised our responsibility based on the Seminary’s biblically informed core values and integrity.”

Kevin Ueckert, Chairman of SWBTS Board of Trustees

I am continuing to follow the Paige Patterson debacle with great interest since I am a Southern Baptist. As I have previously mentioned, I was once a member of the same Baptist church as the Pattersons. When my family joined that congregation, Dr. Patterson had just ended his two-year stint as president of the Southern Baptist Convention and was serving as president of Southeastern Baptist Theological Seminary (SEBTS).

My most vivid memory of him in that church occurred one Mother’s Day when he delivered the sermon. It was my first time ever hearing him preach. When the service concluded I walked up to him and introduced myself, greeting him with a handshake. I felt compelled to tell him that the next time he saw his good friend Adrian Rogers, please let him know that his messages have had a profound impact on a woman in Raleigh. I used to watch Dr. Rogers every Thursday morning at 7 a.m. on cable (via WGN in Chicago). FYI – we have moved our membership several times since then.

The first time I ever attended a chapel service at SEBTS was in September 2003 when John MacArthur came to speak. Even though Dr. Patterson had been appointed president of Southwestern Baptist Theological Seminary earlier that summer, I seem to recall that he introduced Dr. MacArthur.

As I reflect back on that time, it is now heart-wrenching to learn that a female student at Southeastern Seminary had been ‘allegedly’ raped by her boyfriend, also a seminary student, just months earlier. Based on what I have read, it was Paige Patterson’s mishandling of this situation that led to his being fired by the Trustees at Southwestern Baptist Theological Seminary. Here is how the local news reported it late last week. (sorry about the small size of the video below – couldn’t figure out how to make it larger).

On Friday, June 1, Kevin Ueckert, Chairman of the SWBTS Board of Trustees, issued this statement:

Based on a number of follow-up questions I have received this week, I am providing this additional statement related to our May 30, 2018 statement. The unanimous decision by the Executive Committee to immediately terminate Dr. Paige Patterson was prayerfully considered and warranted.

We confirmed this week through a student record, made available to me with permission, that an allegation of rape was indeed made by a female student at Southeastern Baptist Theological Seminary in 2003. This information contradicts a statement previously provided by Dr. Patterson in response to a direct question by a Board member regarding the incident referenced in our May 30 statement. The 2003 rape allegation was never reported to local law enforcement. SWBTS will not release the student record to the public without additional appropriate permissions.

In addition, as previously disclosed, a female student at SWBTS reported to Dr. Patterson that she had been raped in 2015.  Police were notified of that report. But in connection with that allegation of rape, Dr. Patterson sent an email (the contents of which were shared with the Board on May 22) to the Chief of Campus Security in which Dr. Patterson discussed meeting with the student alone so that he could “break her down” and that he preferred no officials be present. The attitude expressed by Dr. Patterson in that email is antithetical to the core values of our faith and to SWBTS. Moreover, the correlation between what has been reported and also revealed in the student record regarding the 2003 allegation at Southeastern and the contents of this email are undeniable.

The morning after the May 30 Executive Committee meeting, Mr. Sharp provided a few documents he reportedly obtained from Dr. Patterson. The documents clearly dealt with Dr. Patterson’s tenure at Southeastern and should have been previously provided in response to Mr. Anderson’s May 25 request. Shortly after these documents were provided, the wife of Dr. Patterson’s Chief of Staff published a blog and attached these documents without the permission of the students referenced in the documents or appropriate leadership from SEBTS or SWBTS. I believe this was inappropriate and unethical. Regardless, the additional documents do not alter the decision of the Executive Committee.

Ultimately, the decision of the Executive Committee to immediately terminate Dr. Patterson was clear and unanimous.

I also want to reiterate what SWBTS Interim President Dr. Jeffrey Bingham said earlier this week.  SWBTS denounces all abusive behavior, any behavior that enables abuse, any failure to protect the abused, and any failure to safeguard those who are vulnerable to abuse.

In this difficult situation, the Executive Committee based its decision on the current performance of the president and did not allow the legacy of Dr. Patterson or the #MeToo pressure to steer the outcome. We did not react; rather, we decisively exercised our responsibility based on the Seminary’s biblically informed core values and integrity.

I join Dr. Bingham in his call for the SWBTS community to join the Body of Christ in praying for healing for all individuals affected by abuse.

During Paige Patterson’s tenure as SWBTS president, another female seminary student was ‘allegedly’ raped in 2015, with the police being notified this time. What is much more disturbing is this portion of Ueckert’s statement:

But in connection with that allegation of rape, Dr. Patterson sent an email (the contents of which were shared with the Board on May 22) to the Chief of Campus Security in which Dr. Patterson discussed meeting with the student alone so that he could “break her down” [emphasis mine] and that he preferred no officials be present.

In the wee hours of the morning on May 23, the Board terminated Patterson. Then a week later he was stripped of all of his retirement perks (while he was out of the country, I might add…)

In a stunning move, Sharayah Colter, the wife of Paige Patterson’s (former) chief of staff, Scott Colter released a statement May 31 defending Patterson and refuting the allegations against him. Her post is entitled:

The untold truth: Facts surrounding Paige Patterson and his removal from SWBTS

It’s good she revealed that she is solely responsible for the post and the information it contains because she may have violated some confidentiality laws. She took screen shots of the 2003 correspondence to Paige Patterson from Megan (Nichols) Lively (who revealed her identity via Twitter on May 28, two days before Shari’ah’s post). Sharayah claims that Paige Patterson doesn’t recall meeting with Megan.

With regard to the second accusation of rape (at SWBTS), it has been revealed that Patterson notified the police and the one being accused admitted to the sexual ‘incident’ but said that it was consensual.

Then there is the accusation that Patterson said that a wife should stay with her abusive husband (see the twisted version in screen shot below):

Sharayah Colter concludes with this (see screen shot below): 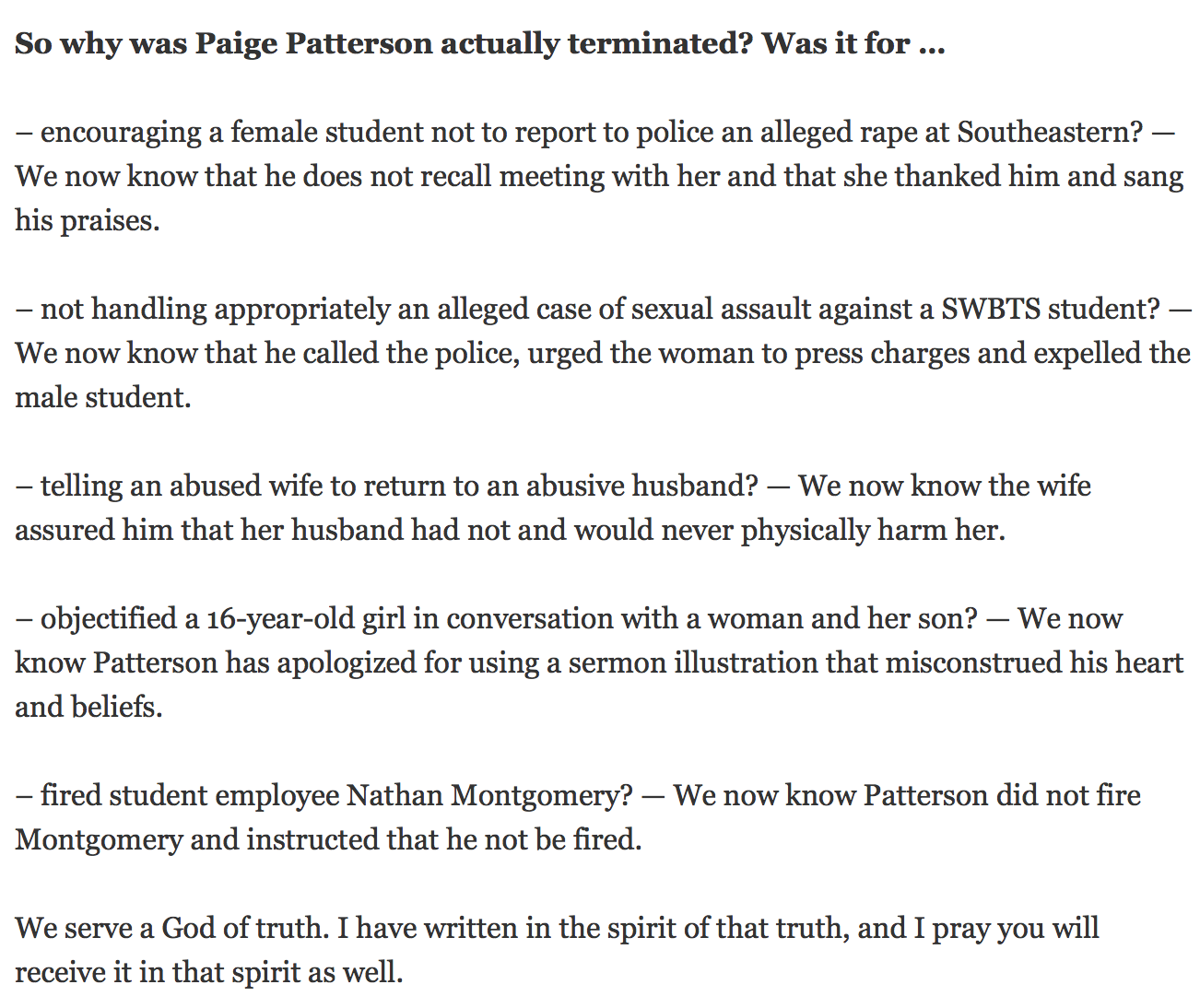 Earlier today another statement was released. It begins as follows:

Given the wide-spread misrepresentation and misinformation regarding Dr. Patterson, it is important to set the facts straight. Insofar as they continue to be misrepresented publicly, accurate and appropriate responses will be issued.

This media release is in response to a release late Friday afternoon, June 1, 2018, from Kevin Ueckert, chairman of the board of trustees of Southwestern Baptist Theological Seminary (SWBTS), concerning an executive committee decision of May 30, 2018, to terminate Dr. Patterson immediately.

The sole purpose of this release is to set forth facts and to put into perspective the committee’s decision and the way in which that decision was made.

I strongly encourage you to read the entire statement, which I plan to discuss in an upcoming post. Can you imagine what’s gonna happen in a week when SBC messengers converge in Dallas?

Will Paige Patterson be addressing the assembly? These are unprecedented times in the Southern Baptist Convention!

I'm heading to Florida for my annual family vacation. This year, my daughter's fiancee joins us, and my other dgtr and husband's foster teen, who'll live with them until 18, join us. Someone from my church will live in at my house and take care of the pugs! I'll catch up shortly.
View on Twitter
0
11

"Sweden halts use of puberty blockers in gender-confused kids due to serious health risks" https://t.co/SRZ0ZPWti3
View on Twitter
0
1