“This false belief that males have inherent, God-given authority over women is an unbiblical, harmful, and heretical teaching…” 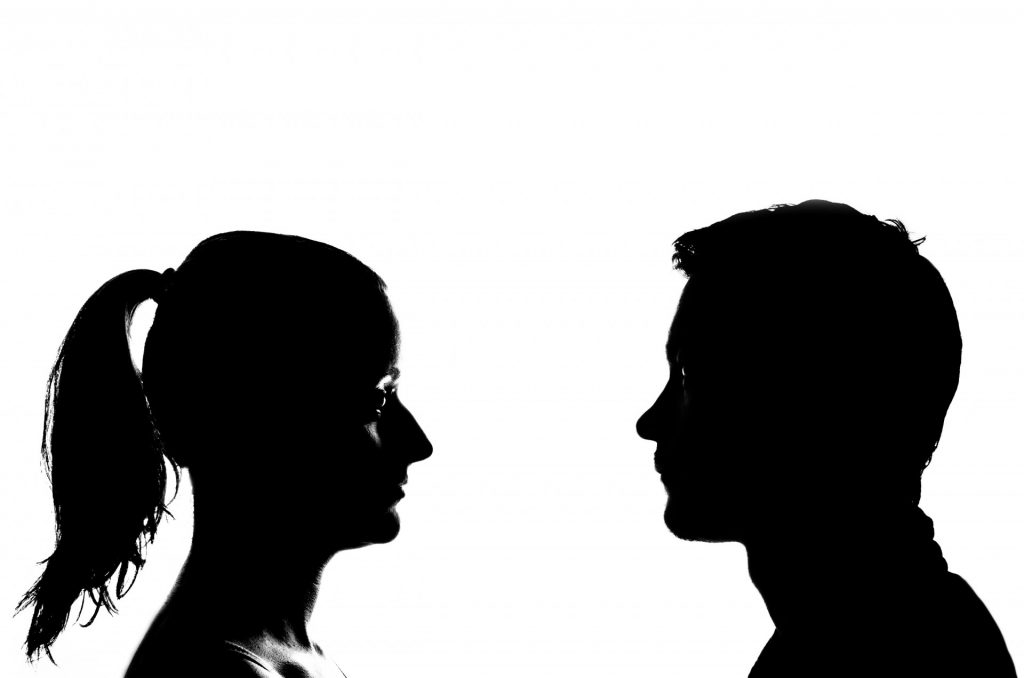 A decade ago Dee and I were members of Southern Baptist churches (different ones), and we discovered that pastors at Dee’s church were pushing for short engagements. Our question was WHY? We met with several pastors from her church to discuss the matter. It was an interesting dialogue, but in the wake of the meeting our views did not change.

However, something incredibly profound happened in the days following that summer meeting. Dee and I began delving into Christian topics online, and a whole new world opened up for us. Until then the internet had been an unexplored resource for me (Deb). I was driven to learn as much as possible about what was happening in the conservative corner of Christendom.

During our MANY hours of research, we came across Wade Burleson’s blog. Around the time that we discovered his writings, Wade had written an extremely important post about the permanent subordination of women that was being advocated by certain Southern Baptist leaders. It was then that we learned about the ESS controversy (Eternal Subordination of the Son). We were so grateful that Wade had taken the time to explain this confusing and controversial concept.

A couple days ago Wade Burleson revisited this topic and re-published his September 2008 blog post that proved to be so helpful to us. We are grateful that Wade has granted us permission to share it with our readers.

These are challenging times, and we hope you will take the time to inform yourself on this very serious matter. Please join with us in praying that ESS (or whatever it is called now) will be shown to be heretical.

We look forward to your commentary and hope you will chime in with any questions you may have.

Tweet It, Read It, Understand It: The Biblical Basis for Believing Men and Women Are Always Equal 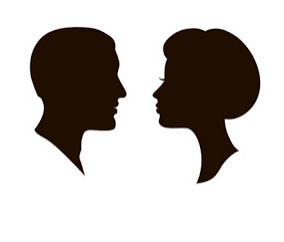 I wrote an article ten years ago (September 2008), which is relevant today due to the current debacle being played out in the Southern Baptist Convention.

If you are a Christian who believes the Bible, take your time to read through this article to familiarize yourself with the reasons why men like Paige Patterson, Wayne Grudem, Bruce Ware,  Al Mohler, and organizations like the Council for Biblical Manhood and Womanhoodbelieve that a man should always lead, and a woman should always submit.

These men teach that if the “roles” of men and women are ever reversed, it’s a sign that we are living in a wicked society  It’s the reason they fight hard to ignore the giftings of highly educated women and remove them from teaching men Hebrewin a seminary. It’s the reason they will tell a woman to return to her abusive husband, submit to him, and pray for him.

This false belief that males have inherent, God-given authority over women is an unbiblical, harmful, and heretical teaching (as I will show below). Yet, these Southern Baptist leaders say they are being “biblical” and those who disagree with them are people who don’t believe the Bible or simply pagans.

That’s just not so.

Ironically, these Southern Baptists who have promoted the inherent and eternal authority of males over females, may, in fact, be the Christian liberals among us. They seem to deny the clear teachings of Jesus Christ, act contrary to the pattern of behavior for all Christians as outlined out in the New Covenant Scriptures, and are subtly but dangerously falling short in their understanding of the Trinity.

Southern Baptists fought one alleged “battle for the Bible” years ago,  but this modern controversy is over believing and practicing some very important truths about gender equality which are in the Bible, the Bible which we Southern Baptists loudly proclaim we believe.

Periodically I will offer a doctrinal post for debate and discussion. Many Christians have little endurance when it comes to doctrinal reading and even less comprehension of how doctrine affects behavior.

This apathy for doctrine has far-reaching harmful consequences.

For this reason, I challenge you to carefully read the following article as it reveals a doctrinal debate within the Southern Baptist Convention that has direct consequences on our Convention’s attitude and behavior towards women.

Let me repeat the last sentence for clarity: There is a current doctrinal debate within the SBC that directly affects our Convention’s attitude and behavior toward women in general.

Arius was a Christian who lived and taught in Alexandria, Egypt (250-336 AD). He became the leading proponent of heretical teaching that would later be identified with his name. Arianism is the belief that God the Father and the Son did not exist together equally and eternally, but that Jesus was created by God the Father and is eternally subordinate to the Father.

In plain English, Arianism teaches Jesus is inherently inferior to God the Father.

Some Christians wrongly confuse Arianism with Aryanism. The latter is the belief that the original speakers of the Indo-European languages and their descendants up to the present day constitute a distinctive, superior race. Hitler was an Aryan, but not an Arian. Aryanism is a belief in human racial superiority. Arianism is a belief in divine patriarchal hierarchy. 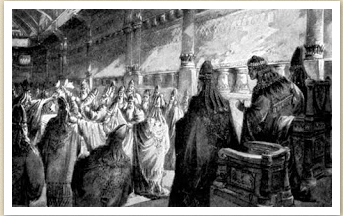 In 325 AD, Christian leaders gathered in the city of Nicaea (modern-day Iznik, Turkey) and debated the doctrine of the Trinity. The Council of Nicaea convened on May 20, 325 AD with around 300 pastors present to discuss the Arian Controversy.

After meeting for a solid month, these pastors issued on June 20, 325 AD what we now call The Nicene Creed.

The Nicene Creed is the clearest and most accepted statement on the divinity of Christ in the history of the church.

The Council declared that the Father and the Son are of the same substance and are co-eternal, believing this to be the biblical and traditional Christian teaching handed down from the Apostles.

The Nicaea Council believed that Arianism destroys the unity of the Godhead, and makes the Son unequal to the Father, in contravention of the Scriptures (“The Father and I are one” John 10:30).

The Council of Nicaea ended with the Christian pastors declaring Arius and his follower’s heretics.

A Resurging Semi-Arianism in the Southern Baptist Convention

The Council on Biblical Manhood and Womanhood is composed of many Southern Baptists who are introducing to evangelicalism a novel, if not peculiar, view of Christ which has more in common with Arianism than the historic, orthodox view of Christ’s person.

The theologians and teachers who write for the CBMW are teaching what they call “the eternal subordination of the Son to the Father” as a basis for their anti-New Testament and patriarchal view that the female is always to be subordinate to the male.

That is the scary doctrine being promoted by leading Southern Baptists, onr deemed heresy by the church nearly two millennia ago, and a doctrine that has disastrous consequences for women in the Southern Baptist Convention.

The Bible calls man’s desire to “rule over a woman” a sin. The notion that God designed leaders to be males, and that He designed women in the role of submissive servants to men, is a direct contradiction of the teachings of Jesus Christ.

“Jesus called His disciples together and said, “You know that the rulers of the Gentiles lord their power over people, and their high officials exercise authority over others. It shall not so with you. Instead, whoever wants to become great you must be your servant, and whoever wants to be first among you must serve.” (Matthew 20:25-27) 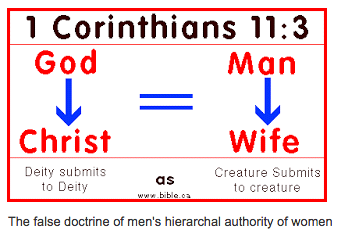 For this reason, the Council of Biblical Manhood and Womanhood proposes that God’s unchanging ideal is the permanent subordination of women.

Their teaching is in error, and it contradicts the teaching of the New Testament.

The New Testament teaches that followers of Jesus Christ – regardless of gender – are to submit “one to another” (Ephesians 5:21). It is as natural in a Christian home for a man to submit to his wife in selfless, humble service as it is for the woman to submit to her husband in selfless, humble service. In fact, the great leaders in the Kingdom – male and female – are those who are servants to all (Matthew 5:27).

There is no denying the physical differences between men and women, but to base the spiritual or emotional “subordination” of women to men on the alleged eternal subordination of the Son to God the Father borders on an Arian view of the nature of Christ.

The very word “ordination means “to order by virtue of superior authority.”

There is a great deal that will be said in the Southern Baptist Convention and the evangelical world as a whole in the coming months and years about the role of women in society, the church, and the home. Sadly, there is a tendency for those who hold to the hierarchical view of a man’s authority over women to label those who disagree with them as liberal.

But it seems to me that some Southern Baptists follow Arian’s teachings more than Christ’s teachings.

A Southern Baptist leader has refused to let a woman teach Hebrew to men because of her lesser “spiritual authority” Southern Baptist male trustees conspired to remove a woman from a supervisor’s position in the International Mission Board because she was violating her God-given role of “receiving orders” and was sinfully “giving orders. Southern Baptist pastors will advocate that women staying out of the workforce because their role is to be subordinate to men in society.  In fact, some will go as far as to say any society where “women rule” is an evil, wicked society. To these Southern Baptist Arians, women are “the lesser” regarding “authority” when compared to men, and anyone who dares disagree with them is considered a “liberal” Christian or a pagan.

It’s time for conservative, evangelical Bible-believing Christians who believe in the equality of men and women to realize that the great error in this debate is not a denial of the sufficiency, the authority, and the infallibility of God’s Word by those who hold to gender equality.

Rather, the great error in this modern debate is the promotion of semi-Arianism – and a denial of Christ’s clear teaching in the New Covenant – by those who wish to force their hierarchical views of male authority upon the church, the home, and society.

Peter Schemm, a member of the Council for Biblical Manhood and Womanhood, argues that there is room within Christian orthodoxy for the belief in “the eternal subordination of Christ.” He argues that people like Giles (and me) who oppose “eternal subordination” and view it as semi-Arianism are simply speaking too harshly for “there is room for both views within evangelicalism.”

It is ironic that those who have an affinity for calling themselves conservativeevangelicals and label “liberal” those who disagree with them are now proposing tolerance and acceptance of their unique views of the Trinity.

We should accept our brothers (and a few sisters) in Christ who are arguing for “eternal subordination,” and we should always treat them with Christian love and respect, but we should never shy away from unchallenging their unorthodox views of the Trinity.