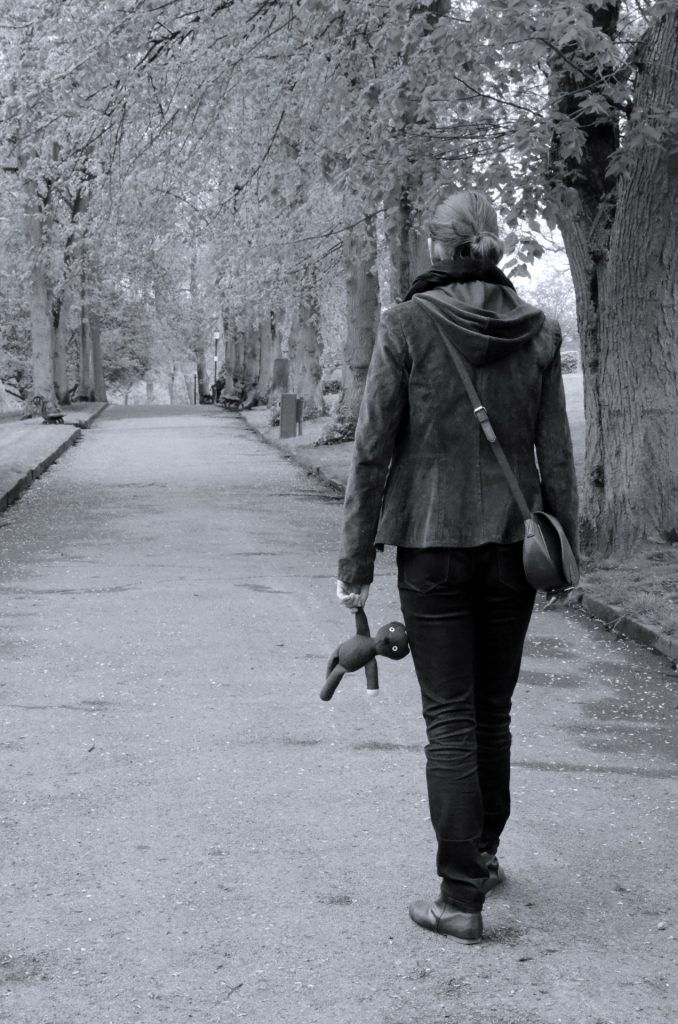 Me too, a movement that began 12 years ago, has been gaining momentum since last October when Alyssa Milano encouraged the use of the hashtag #metoo after accusations against Harvey Weinstein surfaced. This social media phenomenon has empowered quite a few women (and men) to come forward and reveal the abuse they have endured, predominantly in the secular world.

It was the growing #metoo chorus that propelled a woman to come forward who had been hurt two decades ago by her youth pastor when she was just 17. He was five years her senior, which we believe to be a BIG age difference at that stage of life.

As we have often observed, it takes years for some who have been abused to come forward and finally reveal what happened. Why so long? Because it takes a great deal of courage to overcome the shame and fear that these victims feel.

A week ago Dee (TWW) and Amy Smith (Watch Keep) shared the testimony of Jules Woodson (see posts below).

I Thought He Was Taking Me for Ice Cream: One Woman’s #MeToo Story of Molestation by her Former Pastor Andy Savage

What has occurred in the wake of these two posts has been unprecedented! Jules’ story has been shared by not only the Christian media but by secular news outlets in the U.S. and beyond. Here at TWW we have gotten so much commentary under the above post (and two subsequent posts) that we can’t keep up! 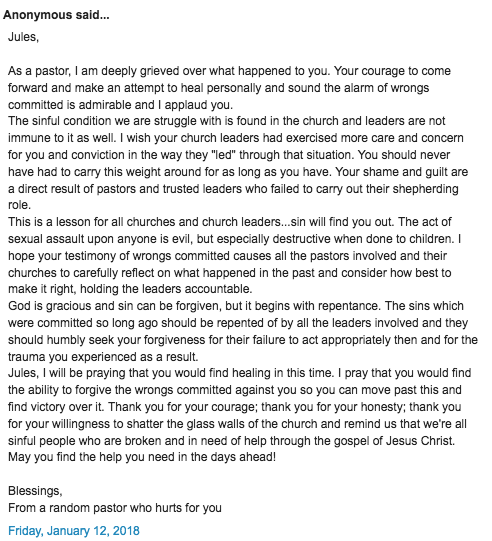 While Jules’ testimony alone was compelling enough to be picked up by the media, it seems the reaction of Andy Savage’s congregation (upon hearing about their pastor’s ‘incident’) is what motivated so many news outlets to call attention to her story.

We believe Ed Stetzer nailed what occurred at Highpoint Church last Sunday in an article published yesterday by Christianity Today. It is aptly named:

Andy Savage’s Standing Ovation Was Heard Round the World. Because It Was Wrong.

Stetzer’s article is definitely worth reading, and he concludes with this (see screen shot below): 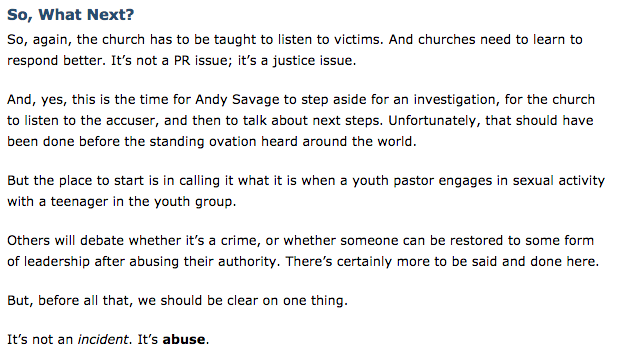 Jonathan Leeman, who is the editorial director at 9Marks and has served as an elder at Capitol Hill Baptist Church, weighed in on the Savage debacle in an article published in The Washington Post. Jonathan made several important points about forgiving someone in the pastorate; however, he also made this pronouncement:

It’s noteworthy that Jonathan Leeman made such a public statement in a secular newspaper. How come? Because 9Marks has close ties with The Gospel Coalition (TGC). Why is that significant? Because in the wake of Jules’ testimony, Highpoint Church is no longer listed in The Gospel Coalition’s church directory. We know it was there because Dee and I saw the church listing around the time Jules’ story was published here at TWW. And if you search the church name along with ‘Gospel Coalition’, there is evidence that it was once listed in TGC’s church directory (see below).

Over at Jesus Creed, guest blogger Becky Castle Miller of the Netherlands wrote an excellent article that was published today. It is entitled: The Jules Woodson Story: #churchtoo

Becky explains that just last September she covered a sexual abuse case at a university in California and that the school put pressure on those speaking out to STOP TALKING! Furthermore, the high profile leaders connected with the university have not faced any consequences whatsoever. We wrote about this situation as well. Then she asks the following question:

What has changed in the past four months?

Becky says it’s being called “The Reckoning”. It seems the #metoo movement is giving more and more victims of sexual abuse the courage to speak up about what happened to them. Jules was empowered to send an email to Andy Savage (as explained in the post featuring her testimony) and then come forward with her story when she got no response from Andy.

Becky goes on to list the repercussions that have occurred during the last seven days (see below):

-Baker Books cancelled publication of a book by Chris Conlee, the current Lead Pastor at HighPoint, the church where Savage is Teaching Pastor. Conlee said in a church statement that he knew about Savage’s choice to have sexual contact with a student in his ministry and still partnered with Savage in their church.

-Austin Stone Church has placed on leave Larry Cotton. He was the Associate Pastor at Woodlands whom Woodson told about her assault when it happened. According to Woodson’s account, Cotton covered up and lied about the abuse instead of reporting it. Austin Stone is hiring a third party investigative firm to look into Cotton’s decisions in that case.

-Savage went on the radio show of his sympathetic friend Ben Ferguson and further shared details of his treatment of Woodson. He only sees it as problematic because he failed to keep his own standard of sexual purity, speaking only about the immorality of his actions and completely missing the unethical and illegal aspects of his choices. He announced that he will be taking a leave of absence from HighPoint while a third party investigates.

Speaking of Ben Ferguson, who interviewed Andy Savage yesterday, he (Ben) was listed as a ‘friend’ on Savage’s website (The Andy Savage Show) until a few days ago. How do we know? Because one of our astute readers sent us a webcache link that shows his name (scroll down near the bottom). Also, we believe Ben had attended Highpoint Church in the past, so the interview was definitely suspect due to this obvious friendship.

There have been other develops this week involving the hiring of third party investigators by Austin Stone Church (where Larry Cotton pastored) and Highpoint Church. We look forward to learning the names of these investigators. Might we make a suggestion? Boz Tchividjian of G.R.A.C.E. Boz is highly qualified and would no doubt be objective.

There will be more to discuss in the coming days, so stay tuned…