"The original seed money for 9Marks was given by a non-Christian neighbor, who had seen the things CHBC was doing in the surrounding area and wanted them to replicate it elsewhere."

In our post – Mark Dever's 9Marks Ministries – Initially Funded by a 'Generous Neighbor'  – we were duly corrected in the comment section, and we wanted to inform our readership. We speculated in that earlier post that the initial funding for 9Marks may have come from Mark Dever's BFF C.J. Mahaney and/or Covenant Life Church/Sovereign Grace Ministries since they have been known to dole out cash to individuals and entitles outside of their 'denomination'.  Here are three comments posted by someone who claims to be in the know.

A number of our commenters reached out to 'anon' for some additional information, but so far there has been no reply.  Dee had a great response to anon (see below).

This has to be one of the weirdest anonymous comments we have ever received. Obviously, it is someone who is involved in CHBC or 9 Marks. Here they are.

I had no idea that by promoting such things, we could get the nonChristian world to ante up. Good night! The world is looking for the 9 Marks solution.

It is absolutely remarkable that a non-Christian would fund such an endeavor.  Capitol Hill Baptist Church is having a far greater impact on the D.C. community than we ever imagined!  Of course some of our commenters scoffed at anon's remarks, questioning his/her credibility.

We have decided to take 'anon' at his/her word since he/she claims to know Mark Dever and Matt Schmucker.  That being said, here's our bottom line…  We are grateful that someone in the 9Marks camp is keeping up with what we are writing. Three years ago I (Deb) misquoted Jonathan Leeman, who quickly pointed out my error.  That online correction served as confirmation that the guys at 9Marks are monitoring what is being said about them on the internet.  Here is our apology post.  We do try to own up to our mistakes.  It just goes to show that the 9Marks staffers are definitely earning their keep.  Here is what Jonathan Merritt over at Religion News had to say about Mark Dever's ministry.

9 Marks, for example, hosts conferences around the globe, has published dozens of books, operates on a nearly $1 million annual budget, and maintains a staff of five full-time and one part-time employee. Between 3,000 and 4,000 congregations nationwide are affiliated with the ministry. Many similar ministries to IX Marks—including pastor John MacArthur’s $19 million-a-year “Grace to You” ministry and the 500+ church Acts 29 network—promote similar teachings and are also thriving.

Jonathan Merritt doesn't quote his source for this information, but as the son of a former SBC president, we would assume he has done his homework.  Jonathan shared this information last year, and we would imagine that 9Marks' revenue has grown in the wake of T4G2016.  Let's not forget that Together for the Gospel operates out of Capitol Hill Baptist Church (CHBC), as the address on its website indicates.

And, of course, the 9Marks Ministry shows the same address as above.  Looks like the seed money from that non-Christian is bearing much fruit.

We would be remiss if we didn't give C.J. Mahaney some of the credit for what his BFF has accomplished because he has contributed to Dever's ministries on at least two occasions.  Here is information about those donations.

As we have been doing more digging about the Mark Dever/C.J. Mahaney connection, some more interesting information has surfaced.  For example, the year that 9Marks began – 1998 – was a pivotal year for Mahaney's organization.  Not only did Larry Tomczak finally sever his relationship with C.J. Mahaney, but the church planting network established by Tomczak and Mahaney underwent a name change.  Here is the announcement in Christianity Today.

This blurb appeared on April 27, 1998.  A mere seven months later, 9Marks was launched.  Of course, PDI Ministries went on to change its name to Sovereign Grace Ministries in 2002.  In recent years, it has morphed once again and is now called "Sovereign Grace Churches".  Are all these name changes 'divine providence'?

We have spent very little time researching PDI, but when we did a search, something interesting showed up.  It was a book review of The Five Star Church by Greg Gilbert, one of Mark Dever's former interns.  He finished the CHBC internship program in 2000 and currently serves as pastor of a church in Louisville, Kentucky (see screen shot below).

Here is a portion of what Greg wrote: (see screen shot) 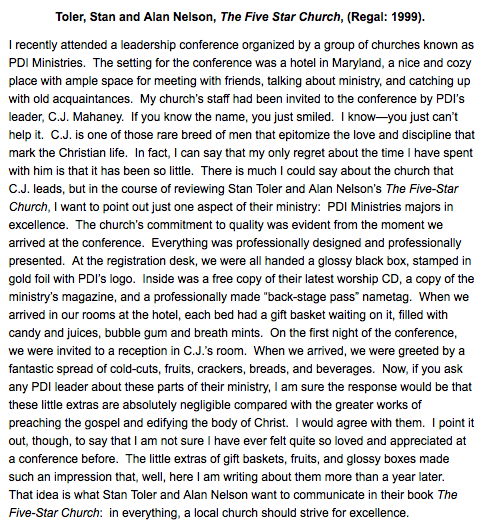 None of this surprises us.  Mahaney is the conference planner extraordinaire and has taught his buddies, Dever, Mohler, and Duncan, well!  Greg Gilbert's commentary just goes to show that Mahaney has mastered the art of putting on a great conference, beginning when he and Larry T. were 'People of Destiny".  (see screen shot below)

Gilbert's statement regarding Mahaney / PDI – "the effect was to make us feel incredibly loved" – must ring hollow to those who supported him at Covenant Life Church, and PDI, SGM, Sovereign Grace Churches through the years.

We remember reading testimonies about how CLC members made HUGE sacrifices in order to contribute to the building of Covenant Life Church.  We'll never forget those comments over at SGM Survivors divulging how Mahaney (and Tomczak) wanted more $$$ to build a multi-million dollar gymnasium, and some CLC members sacrificed by eating oatmeal for dinner to make their leaders' dreams come true.  🙁

We are planning to do a follow-up post on 9Marks next week, and in preparation for that piece, we want to pose the following question to our readers:

What are the three most important things you wish your church knew about 9 Marks?

Feel free to comment here or by email – deb@thewartburgwatch.com