"Change is here to stay…" 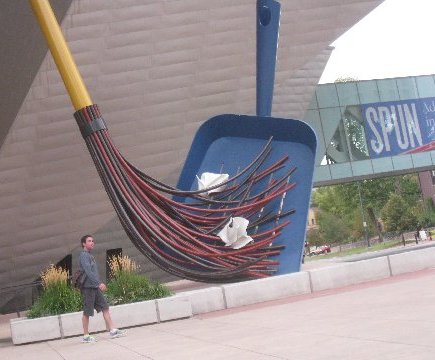 When I was working on the previous post regarding Mark Dever and his infamous 9Marks, I attempted to pull up C.J. Mahaney's blog – C.J.'s  View from the Cheap Seats.  Perhaps you remember some of those posts where Mahaney interviewed high profile Christian leaders, asking them a series of questions.  It was always interesting to see how these men would respond to his question — "What do you do for exercise?"

Well, Mahaney's mantra "Change is here to stay" also applies to the blogosphere.  Looks like 'Sovereign Grace Churches' (note the name change) are in the process of revamping their website, and things they are a-changin'.

When I searched C.J. Mahaney, Mark Dever and C.J.'s View From the Cheap Seats, here are two entries that came up (see screen shot below):

But when I clicked on each of these links, this is a screen shot of what I saw:

As of now, Justin Taylor's website over at The Gospel Coalition still features C.J. Mahaney's statement from 2011 –  Why I'm Taking A Leave of Absence.  You may remember that Mahaney's statement first appeared on the Sovereign Grace Ministries website but was later removed by Dave Harvey, who was serving as interim president of the SGM Board.

Speaking of Dave Harvey, I searched the new website www.sovereigngrace.com and found absolutely nothing!  For those of you who may not be familiar with him, Harvey was one of the key leaders of Sovereign Grace Ministries (SGM) who pastored at Covenant Fellowship Church in Pennsylvania.  When Mahaney stepped down as President of SGM, Harvey succeeded him (as his zoominfo shows).  Dave Harvey left SGM a few years ago and now pastors at a church in Florida.

Getting back to the scrub job, when I searched 'C.J. Mahaney' on the new website these two items came up, among other posts that mention his name (see screen shot):

When I clicked on each of these links, this is what immediately appeared:

Adrian Warnock, who blogs over at Patheos, wrote a post on February 1, 2008, entitled 8th Most Read Post – Interview with C.J. Mahaney.  As you can see from the screen shot below, he states that he has known Mahaney since the 1980s.  What is helpful about his writing is that he documents when Mahaney launched his blog – January 2008.  If you attempt to click on the link to C.J.'s blog in Warnock's post, you will see the words "Page Not Found". 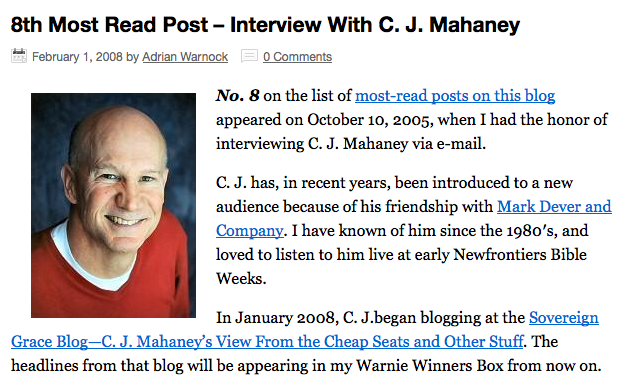 And Adrian Warnock gives credit where credit is due in this 2008 post  — it was Mark Dever and Company (that would be Mahaney's T4G buddies) who introduced C.J. to a 'new audience'.  As we have seen in recent years, the Neo-Cals are a loyal bunch that really knows how to stand by their man.

Even though Mahaney's posts have disappeared from the Sovereign Grace website, it appears they have been transferred to a new web location called Bloglovin'.  I was not familiar with it, so I consulted the Wiki article, which states:

Bloglovin is a platform that allows users to read, organize, and discover their favorite blogs on mobile and desktop. It is a design-focused platform that aggregates feeds from sources with RSS feeds, allowing users to discover and organize content.[1] As of April 2014, Bloglovin’ reaches over 16 million global users monthly.[2] Bloglovin caters primarily to the “lifestyle” crowd.[3] 90% of Bloglovin’s users are female.[4]

There is a listing of posts written by C.J., but in order to read them you have to log in.   You can even 'subscribe'.  It is interesting that one now has to take these extra steps to read anything written by Mahaney.

For those of you who are loyal Mahaney fans, you will be pleased to know that he's back on the conference circuit.  He will be speaking July 29 – August 1 at WORSHIPGOD2015.  The topic is "Triune", and the event will take place at Highview Baptist Church, which last time we checked was the church where Al Mohler is a member.

It has been interesting to see this 'family of churches" go from being called People of Destiny to PDI International to Sovereign Grace Ministries to Sovereign Grace Churches.  And it still seems strange that the name of the co-founder of this church planting network, C.J. Mahaney, is nowhere to be found with the exception being the Books category under Resources.

Yep, summer is a time when many of us are busy with vacation plans and other distractions.  What better time to make significant adjustments to the Sovereign Grace website, hoping those changes will slip through unnoticed?

We still don't get why those who emphasize God's sovereignty (SOVEREIGN Grace) appear to be in a constant state of transition?  What a contrast to our Heavenly Father who asssured us: