"They said, 'Come, let us build for ourselves a city, and a tower whose top will reach into heaven, and let us make for ourselves a name, otherwise we will be scattered abroad over the face of the whole earth.' " 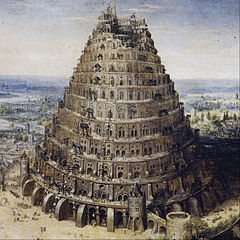 WORLD Magazine, in an effort to keep its readership apprised of developments in Christendom, has published two articles in recent weeks about a lawsuit against Sovereign Grace Ministries and eight individuals. The first article, published just a day after the lawsuit was filed, is entitled Lawsuit claims evangelical church hid abuse claims. It begins as follows:

"Three female plaintiffs claim an evangelical church group covered up allegations of sexual abuse against children, failed to report accusations to the police and discouraged its members from cooperating with law enforcement, according to a lawsuit filed Wednesday.

The lawsuit was filed in Maryland state court against Sovereign Grace Ministries, a 30-year-old family of churches with more than 80 congregations. Most of its churches are in the U.S., but it also has planted congregations in other countries. The alleged abuse happened in Maryland and northern Virginia in the 1980s and 1990s.

The plaintiffs allege a conspiracy spanning more than two decades to conceal sexual abuse committed by church members. They accuse church representatives of permitting suspected pedophiles to interact with children, supplying them with free legal advice to avoid prosecution and forcing victims to meet with and "forgive" the person that had molested them.

"Troubles continue to mount for Sovereign Grace Ministries (SGM), an evangelical association with about 90 churches and 28,000 members worldwide. The SGM board of directors reinstated the ministry’s founder, C.J. Mahaney, as president of SGM in early 2012 after he took a leave of absence for several months.

Accusations of spiritual pride and hypocrisy precipitated Mahaney’s leave. Now SGM is facing a lawsuit by three female plaintiffs, alleging that SGM leaders covered up sexual abuse that occurred in the 1980s and 1990s, and that they discouraged church members from cooperating with law enforcement officials…

The lawsuit charges SGM leaders with allowing suspected child abusers to continue interacting with children, sheltering the accused perpetrators from prosecution, and forcing alleged victims as young as 3 to forgive their molesters. The complaint accuses several SGM elders and officials of actively covering up the crimes, while it names Mahaney because the offenses allegedly occurred under his leadership."

Meanwhile, we are keeping track of how long it takes for The Gospel Coalition to acknowledge that one of its Council Members – C.J. Mahaney – and the ministry he leads – Sovereign Grace Ministries – have been named in a lawsuit.  We are currently on Day 20 (since we started our count).  It will be interesting to see how long it takes for this crowd to acknowledge this serious matter.

As the information from World Magazine indicates, it appears there is some uncertainty regarding the number of churches currently in SGM.  Several congregations have recently left this "family of churches".  There have been indications that Covenant Life Church may disassociate from SGM, and it now appears that this may indeed come to pass before year end.

Brent Detwiler, who was at one time in the inner circle of SGM, wrote an insightful post earlier this week which provided some background about Covenant Life Church.  He began with these words:

"No church has loved C.J. and Sovereign Grace Ministries more than Covenant Life Church in Gaithersburg, MD.  From its inception in 1977, CLC has served as the model church for all the churches in SGM.  The members of CLC have worked harder and given more to serve the interests of C.J. and SGM than any other church."

He then talks about the expansion of CLC (completed in 2002), which housed SGM headquarters and the pastors college for a decade.  With regard to the CLC facility, Brent explains that many conferences have taken place in this facility.  Not only that, church members (approximately 5,000 of them) have sacrificed their time, talent, and treasure to help SGM succeed "for the glory of God".

Now for the rest of the story… Brent explains:

"All that has changed.  In July 2011, C.J. abruptly left Covenant Life Church without talking to any of his pastors about his decision.  In April 2012, he abruptly decided to relocate the SGM headquarters to Louisville, KY without talking to any of the pastors.  In September 2012, he started a new church even though he was unreconciled to his old church and the pastors.  Tens of thousands of people have watched C.J. destroy the ministry we began in 1982.  Friends and supporters throughout nation and many parts of the world have been shocked as they’ve observed C.J.’s pride, deceit and hypocrisy over the past year and a half.

After being ever so patient and forbearing with C.J., Joshua recommended last night that Covenant Life Church end their partnership with Sovereign Grace Ministries.  All 18 pastors were in complete agreement with Josh…

Only someone who has been a part of Sovereign Grace for a long time can fully appreciate the magnitude of this action by the CLC pastors.   These 18 men were all loyal and devoted friends and followers of C.J.  Their lives and ministries were largely built around C.J. and his leadership.  None of them ever imagined having to leave SGM because they no longer trusted C.J. or the Board of Directors given their abusive leadership practices and unethical conduct.  Many other churches in SGM feel the same way.  A few have left.  Many more will follow."

Detwiler further explained that last Sunday night Joshua Harris, pastor of Covenant Life Church, explained to the congregation why the flagship church needs to separate from Sovereign Grace Ministries.   It is my understanding that some of the CLC pastors attended the SGM Pastors Conference that took place last week in Florida.  According to Detwiler, C.J. remains unrepentant since July 2011, when he voluntarily stepped down as SGM president.  Brent further states that the CLC pastors have "experienced the trickery of Dave Harvey, the heavy handedness of Mickey Connolly, and the partiality of John Loftness".

According to Brent Detwiler, a large number of congregations will disassociate from SGM for two reasons:

According to Detwiler's post, the constitution of Covenant Life Church stipulates that the entire congregation must vote on the pastors' recommendation to withdraw from SGM.  The CLC pastors will be having two “Coffee and Conversation” meetings on November 11 and 18 to address questions.  Two weeks later church members will vote ONLINE over a three week period.  In order for CLC to sever ties with SGM, 51 percent of the congregation must vote in favor of it.  By mid-December, this process should be complete.

"From my perspective, C.J. began to build a “Tower of Babel” around 1996.  The Sovereign Grace tower reached to the heavens by 2010.  But now in 2012, the Lord has come down and begun to scatter it over the earth."

We leave you with this clip from the 2012 Together for the Gospel conference, which was featured a few days ago on the Sovereign Grace Ministries website.  C.J. Mahaney has left CLC behind and appears to be moving on to BIGGER and BETTER things, for "the Savior's" glory, of course.

@wartwatch Southern Baptists (SBC) were FOUNDED on the Biblical codification of owning humans as inheritable property.

It took them 150 years to acknowledge that evil and they still attempt to whitewash and obscure the truth.
View on Twitter
1
0

The idea that SBC theology and polity prevents following best standards practices related to sexual and domestic violence is absolute nonsense, always has been, and that's well known. How do I know? Because I've gone through the legal and polity questions repeatedly...(thread)
View on Twitter
105
0

SBC Executive Committee rejects the request for system-wide abuse inquiry. One person claimed that no one in the SBC favors sex abuse. There are 600+ Baptist pastors and leaders documented by @BAccountabilty who participated in such acts.
https://t.co/fMP0Tlg7VF
View on Twitter
1
11

😂😂😂Founders' Tom Buck “The current battles our churches are facing in our culture require its pulpits to be filled with men who don’t wear lace on their skinny jeans,” Maybe they'll start their own show of "What Not to Wear. https://t.co/PQJL61eqO9
View on Twitter
0
3

Watermark Church members are trained not to ask questions. https://t.co/Op34FyFjx8
View on Twitter
0
2