When I read story after story of mishandled claims—all occurring against the backdrop of the thunderous success of the [Liberty] university’s fundraising and enrollment—I was reminded of a different powerful Christian institution, Kanakuk Kamps, which ignored red flag after red flag that it had a superpredator in its midst. After all, he was so successful. He was so appreciated. The applause for him was thunderous.
-David French, “The Moral Collapse of America’s Largest Christian University. The light goes out of Liberty.”

“Pete Newman is the most thorough relationship builder with kids in Kanakuk history,” Kanakuk chief executive officer Joe White once said. “This guy has a raging love for God and it spills over constantly to the kids at kamp.”
-The French Press, “They Aren’t Who You Think They Are -The inside story of how Kanakuk – one of America’s Largest Christian camps – enabled horrific abuse.”

Raging love, indeed. Newman was a man whose actions showed he had no love for God or others. His driving force in life was grooming 10-15 year-old boys so he could sexually abuse them. He is now serving a life sentence in a maximum security prison. 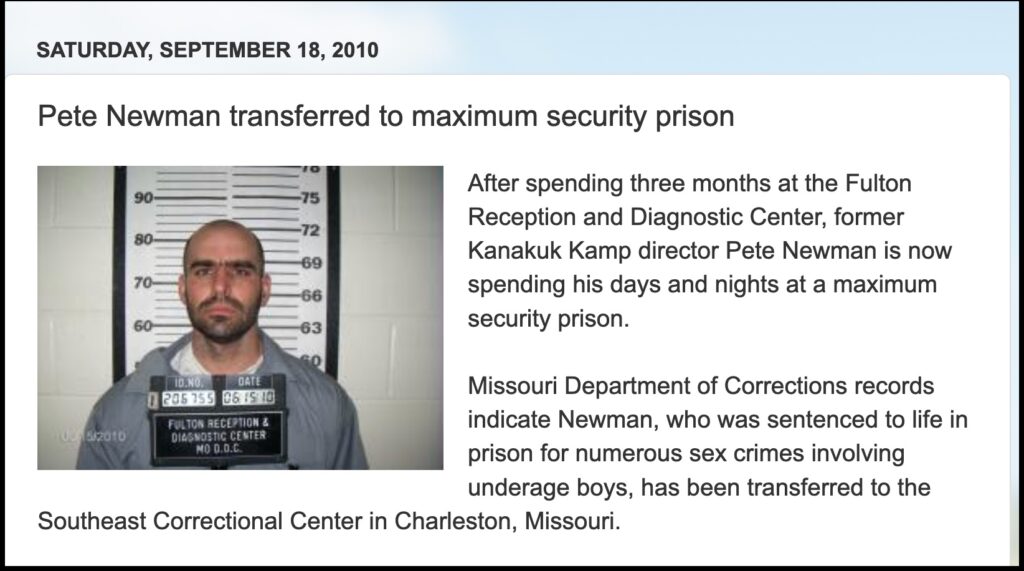 That Joe White would make a statement like the one above shows, in my opinion, that he either lacks any discernment or was more intent on protecting the brand than he was in protecting children. Either way, that White remains as chief executive officer of Kamp Kanakuk is a travesty.

I encourage you to watch the video below. It is an excellent 17 minute documentary of victims and parents of victims of those abused by Pete Newman fighting for justice and truth by bravely speaking out.

There were many speakers through the years at Kamp Kanakuk and apparently no one questioned what was going on at the camp. Included in this number was Alex Himaya, the Senior Pastor of BattleCreek Church in Tulsa, OK.

Alex Himaya’s best friend, David Nasser, who up until this past April was the Special Vice President for Spiritual Development at Liberty University, is shown in this video, taken in 2015, praising Joe White as he introduced him at a chapel service at Liberty University.

It’s my opinion that people in leadership positions, whether it be in churches, para-church organizations, or Christian education, need to closely examine a man prior to praising him as a legendary Christian. A classic case in point is when Vice President Mike Pence spoke in glowing terms of Ravi Zacharias at his memorial service.

“Whoso would be a man, must be a nonconformist. He who would gather immortal palms must not be hindered by the name of goodness, but must explore it if it be goodness.”
― Ralph Waldo Emerson, Self-Reliance and Other Essays

Dee Parsons Retweeted · Pope Francis
@Pontifex
This is the attitude of a true apostle: to go confidently forward, preferring the uncertainty of unexpected situations rather than force of habit. This courage is born from confident trust in God's greatness who loves to work through our lowliness. #ApostolicJourney
View on Twitter
694
0