↓
Home Menu ↓
Skip to primary content
Skip to secondary content
On May 30, 2018, Paige Patterson was terminated from his position as President of Southwestern Baptist Theological Seminary for, “the handling of an allegation of sexual abuse against a student during Dr. Paige Patterson’s presidency at another institution and resulting issues connected with statements to the Board of Trustees that are inconsistent with SWBT’s biblically informed core values.” (Source)


While there were undoubtedly many good friends serving on the SWBTS’s Board of Trustees, the fact that they were able to set aside their friendship with Patterson and do the right thing speaks to the integrity of the members of the Board of Trustees.

Anthony Moore (whom Paige Patterson called “my sweet son, Anthony” in a foot-washing ceremony which took place at a chapel service at SWBTS) was terminated from The Village Church when a subordinate reported discovering multiple videos taken of him while showering at Anthony Moore’s home.

Thomas White was a long-time assistant of Paige Patterson, working at both Southeastern and Southwestern Seminaries. White is currently on administrative leave from his position as President of Cedarville University while his involvement with the Anthony Moore hiring is being investigated. 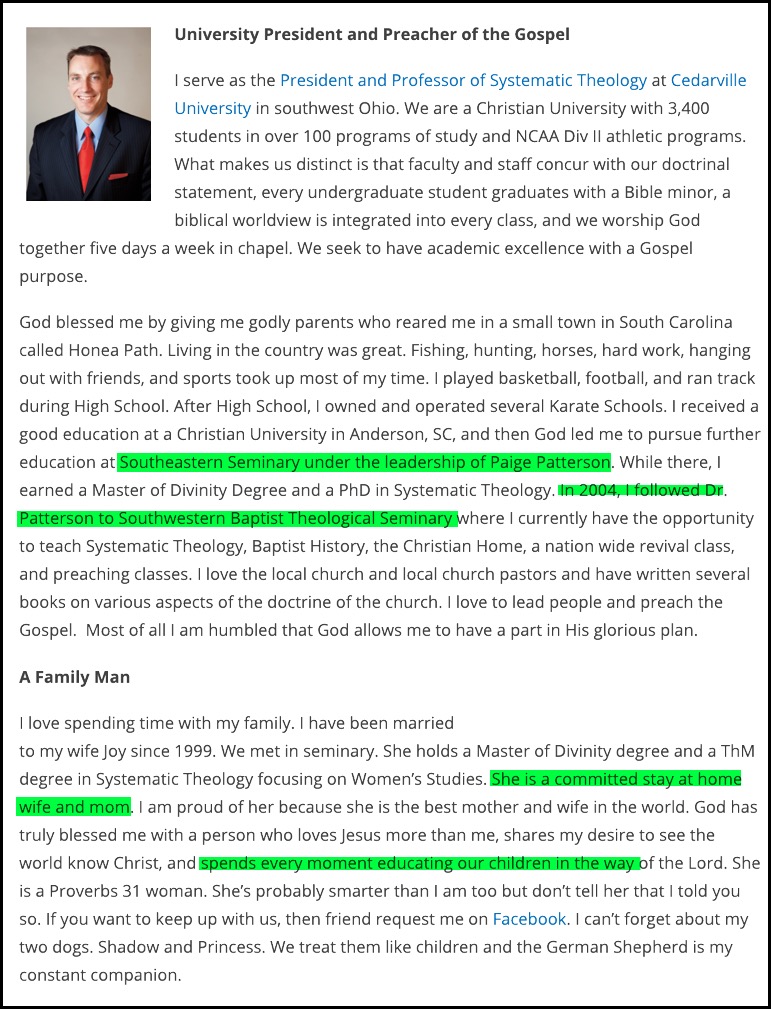 Jason Duesing currently works as Provost and Professor of Historical Theology at Midwestern Baptist Theological Seminary. He also had a lengthy, close relationship with Paige Patterson. He was Patterson’s personal aid while at Southeastern Seminary and filled the same role at SWBTS. In fact, I was told Duesing was Patterson’s “right-hand man” while the two were employed at SWBTS.

One fact not mentioned in the short bio below is that Jason Duesing is a member of the Cedarville University Board of Trustees, as such, Duesing will be involved in the deliberations that will determine the fate of President Thomas White.

What concerns me about Duesing is whether he is able to be an impartial judge of the fitness of Thomas White to continue as the President of Cedarville University. While I realize the White investigation is not a formal trial, if it were, and Duesing was the presiding judge or a potential juror, he would have to recuse himself. I believe you will come to the same conclusion after viewing the information in this article.

In my opinion, Paige Patterson is not a man of integrity. It appears the men he selects to mentor also struggle in varying degrees with issues of integrity. 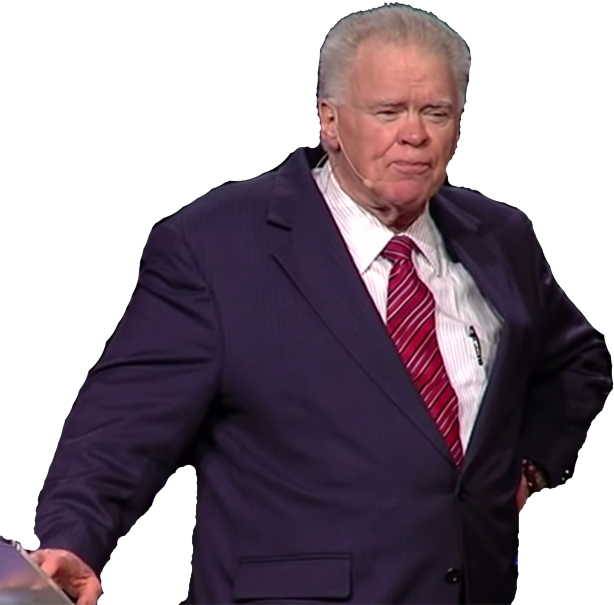 When you get this many “bad apples” it may be time to prune the tree! 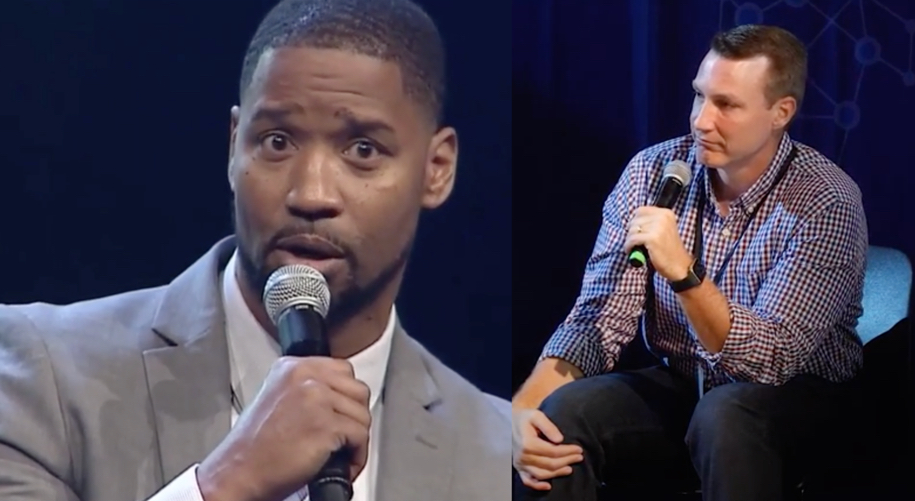 Jason Duesing, having obtained his M.Div. from Southeastern Seminary in 2003, soon followed Paige Patterson to Southwestern Baptist Theological Seminary. Prior to leaving, Duesing was given a nice, one-year-old car that had been the property of Southeastern Seminary. It appears two Southeastern staff members learned of the gift and blew the whistle. Both whistle-blowers were subsequently fired and it appears a cover-up was initiated. A portion of the article is captured below, you may read the entire article at this link. An interesting follow-up article titled, “Seminary leaders, employees give different accounts of car sale” may be viewed at this link. 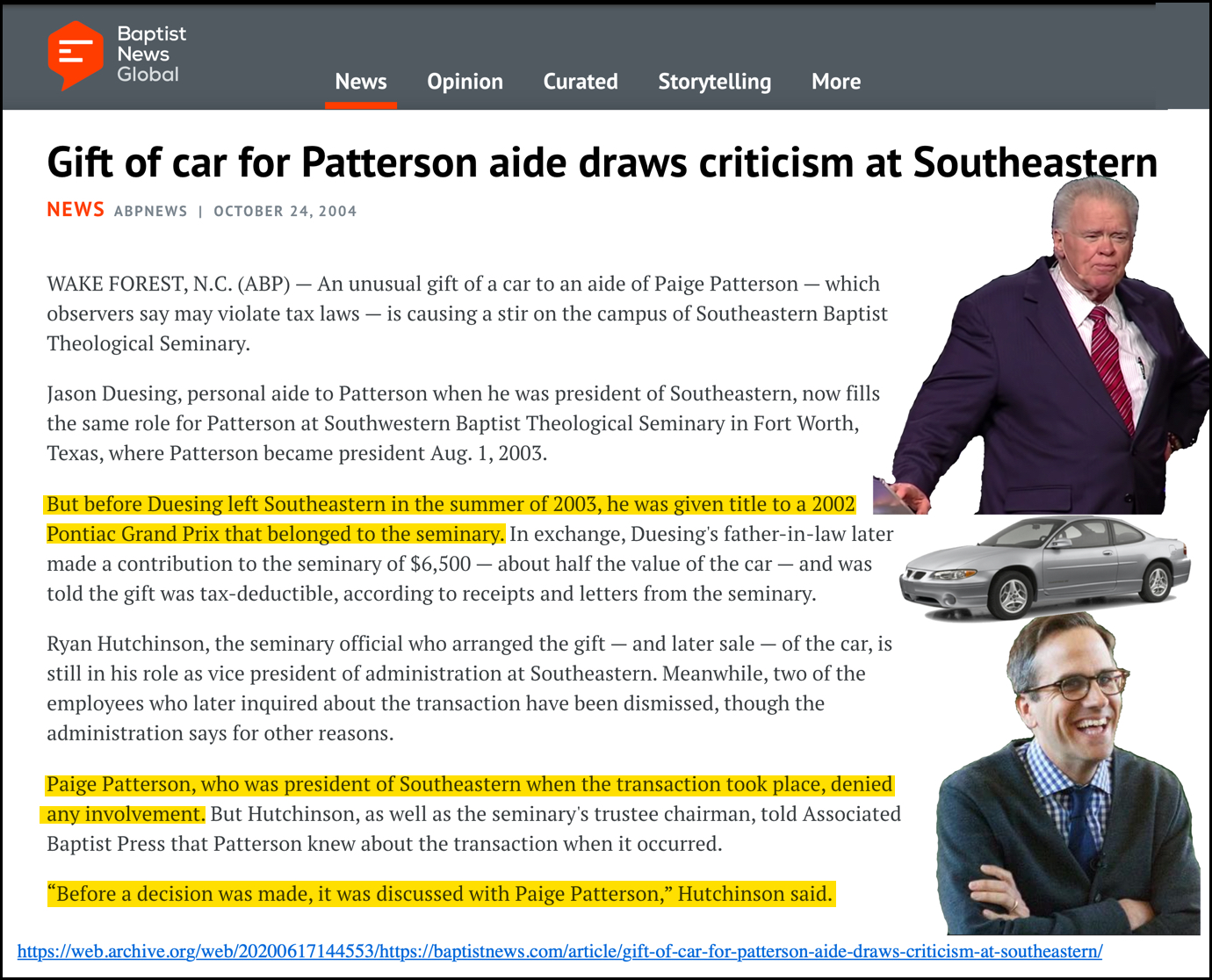 The critical issue in this story is the complicity of Jason Duesing. One may rightly wonder how issues of integrity were not raised in the sharp mind of Duesing by accepting a car that was the property of Southeastern Seminary. While I have trouble believing Duesing did not immediately find such a gift to be improper, he surely would have realized there were serious issues of impropriety when his father-in-law was enlisted (after the fact) to contribute $6,500 to the Seminary.

Now I will highlight the close relationship between Jason Duesing, Thomas White, and White’s cadre of loyal employees White brought with him from SWBTS to Cedarville University.

Below is a screenshot of the whole group on the occasion of Jason Duesing traveling to Cedarville University to speak at one of their chapel services. You will note that this was the first of at least three times Duesing has spoken at a CU chapel service. 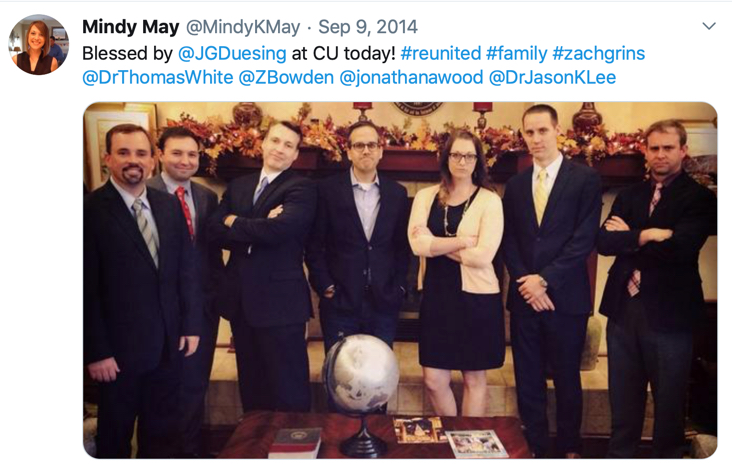 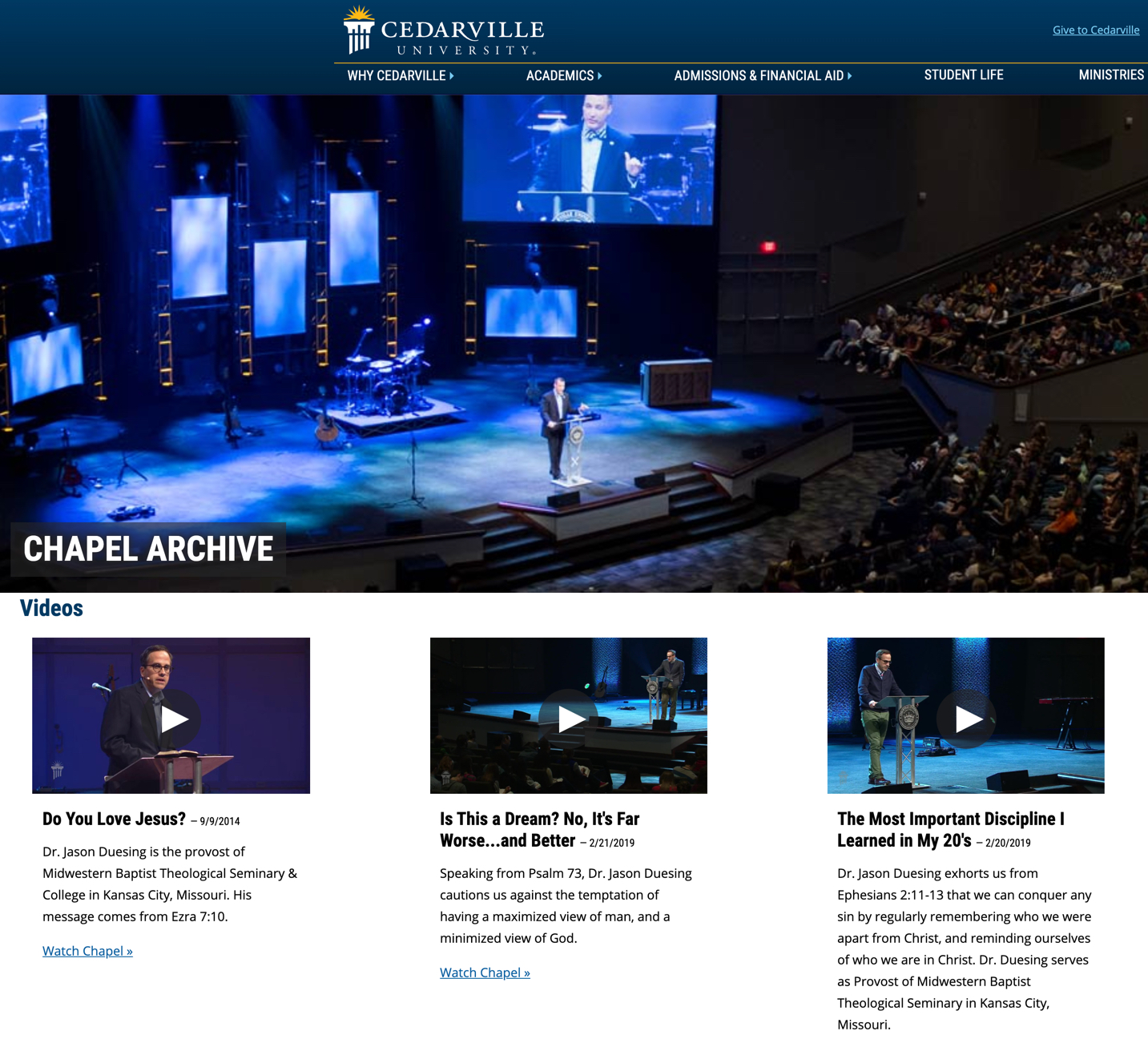 Below are a few Tweets from Zach Bowden and Mindy May. These two individuals are fiercely loyal to Thomas White. They also appear to have strong ties to Duesing.

“In 2007, Duesing and White edited the book, “First Freedom – The Baptist Perspective on Religious Liberty.”  In the Acknowledgements, they thank their student (and friend) Anthony Moore for indexing the book.
They also make an unfortunate “if-then” prediction: “If these two students represent the future of Southern Baptists, then our future is bright indeed.”
Well, we have seen the future, and it isn’t bright.
The tragic secret life of Anthony Moore has since come to light, as well as an epic series by the Houston Chronicle detailing the sexual abuse of 700 individuals by Baptist pastors. More recently we have seen J.D. Greear, pastor of the Summit Church and President of the SBC foolishly hire Bryan Loritts, a man who has admitted covering up the crimes committed by his then brother-in-law while he was the senior pastor of Fellowship Memphis in 2010.
White, Duesing and Moore were connected as far back as at least 2007. Moore was their student. Now, Duesing is a trustee of CU who has the responsibility to determine if White should keep his job for hiring, hiding, and then firing the confessed predator, Anthony Moore.” 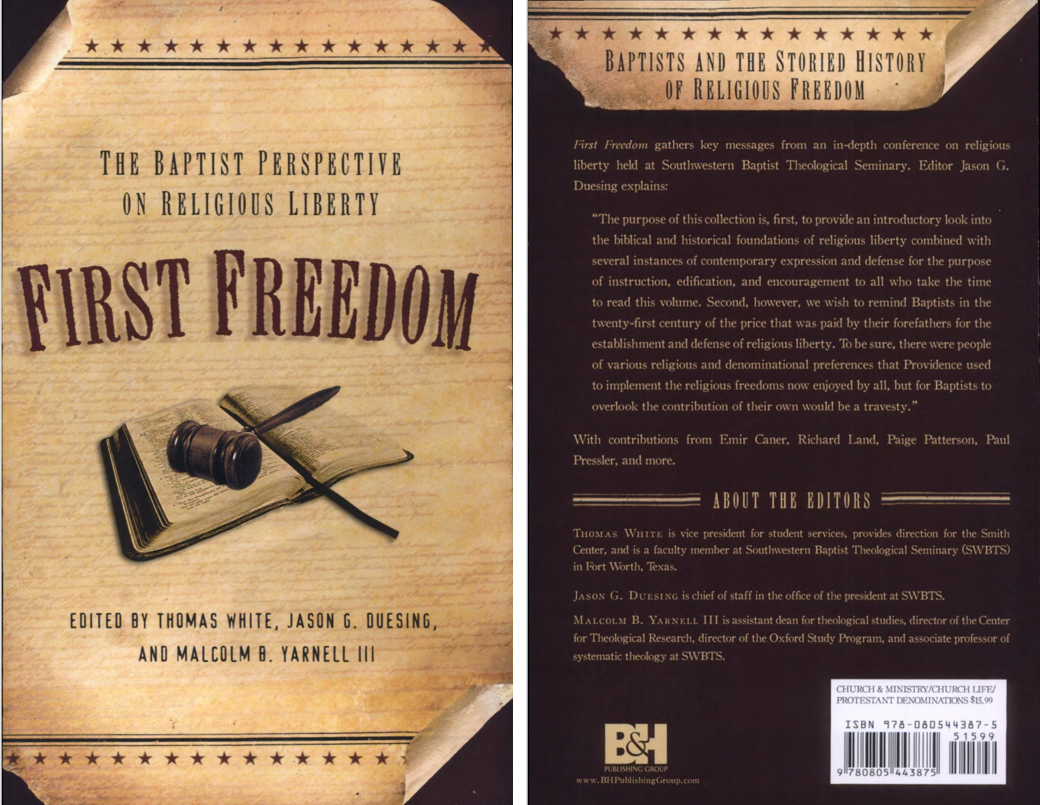 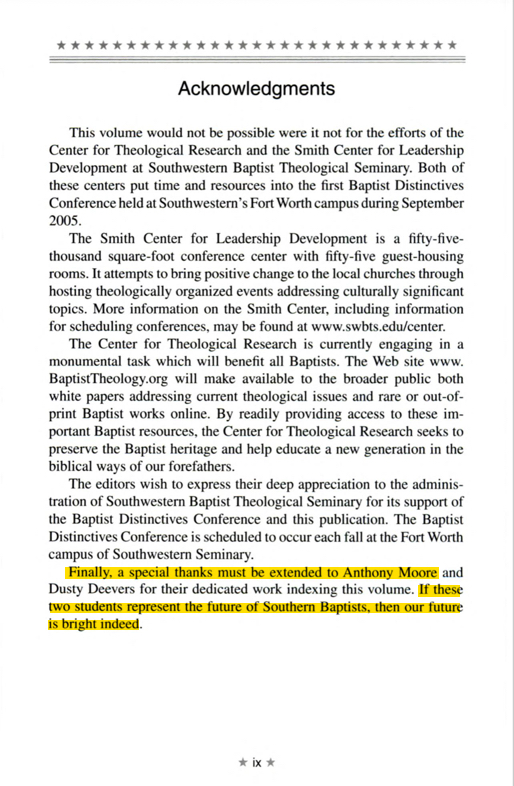 Duesing recently taught a class at Midwestern Baptist Theological Seminary.  Below are some screenshots from the syllabus for the course. Please note the titles and authors of some of the books for the course.
Duesing includes several of his books, including two that are co-edited with Thomas White. Ironically, one of these texts is titled, “Restoring Integrity in Baptist Churches.”
Another questionable text is authored by Judge Paul Pressler. Pressler has been accused of sexually abusing multiple teenage boys.
Then there is a text authored by Bryan Loritts. I have referred above to the fact that Loritts covered up sexual abuse admitted to by his then brother-in-law in 2010.
Duesing also lists a book authored by his mentor, Paige Patterson. 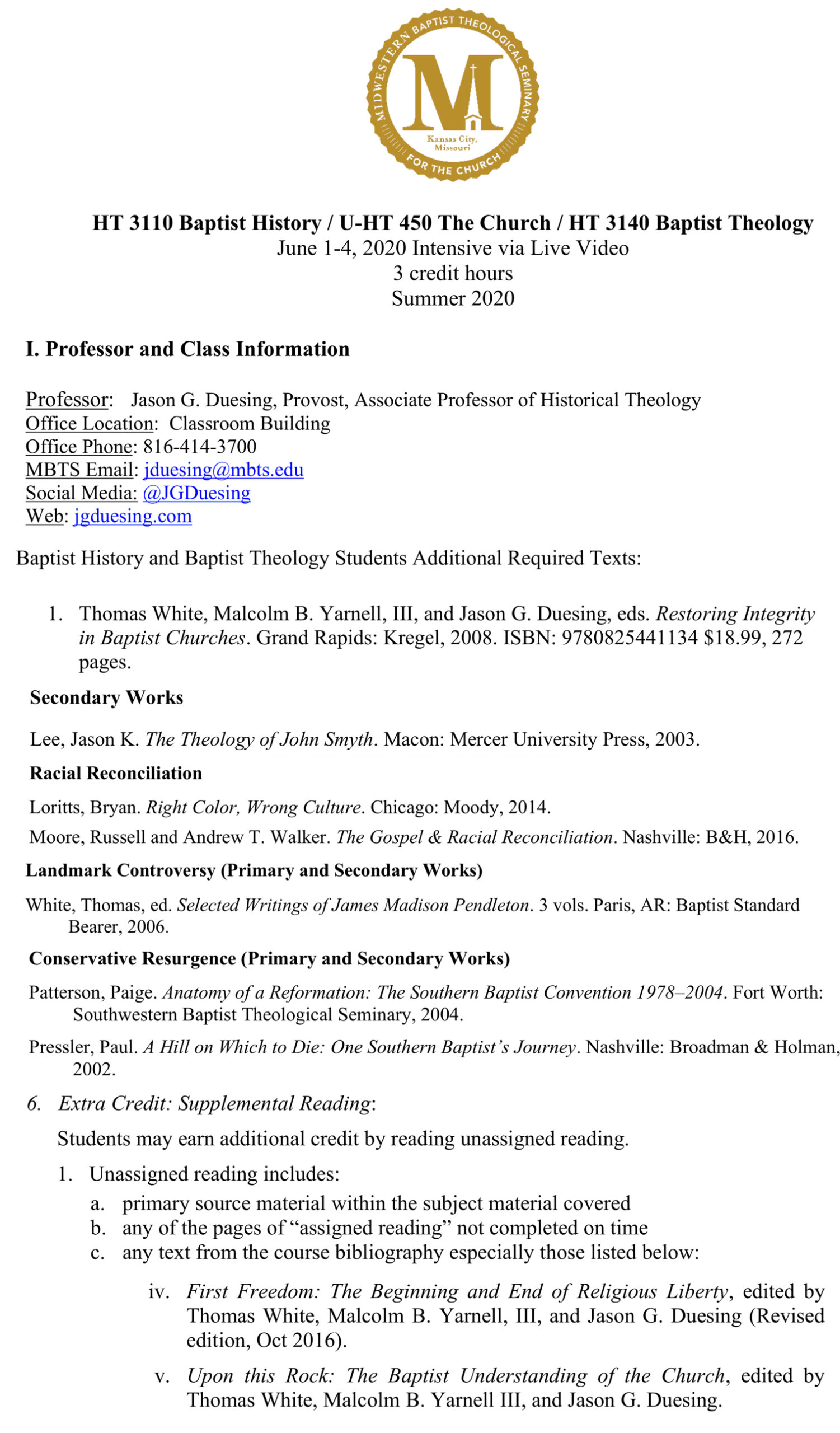 In the acknowledgments for the book “Restoring Integrity in Baptist Churches,” the editors, White, Duesing, and Yarnell drew special attention to the “king of integrity,” Paige Patterson. They also thank Jon Wood.
Wood followed White to Cedarville where his official job title is “Vice President for Student Life and Christian Ministries and Assistant Professor of Theological Studies.” I am told that unofficially he serves as White’s hatchet man. 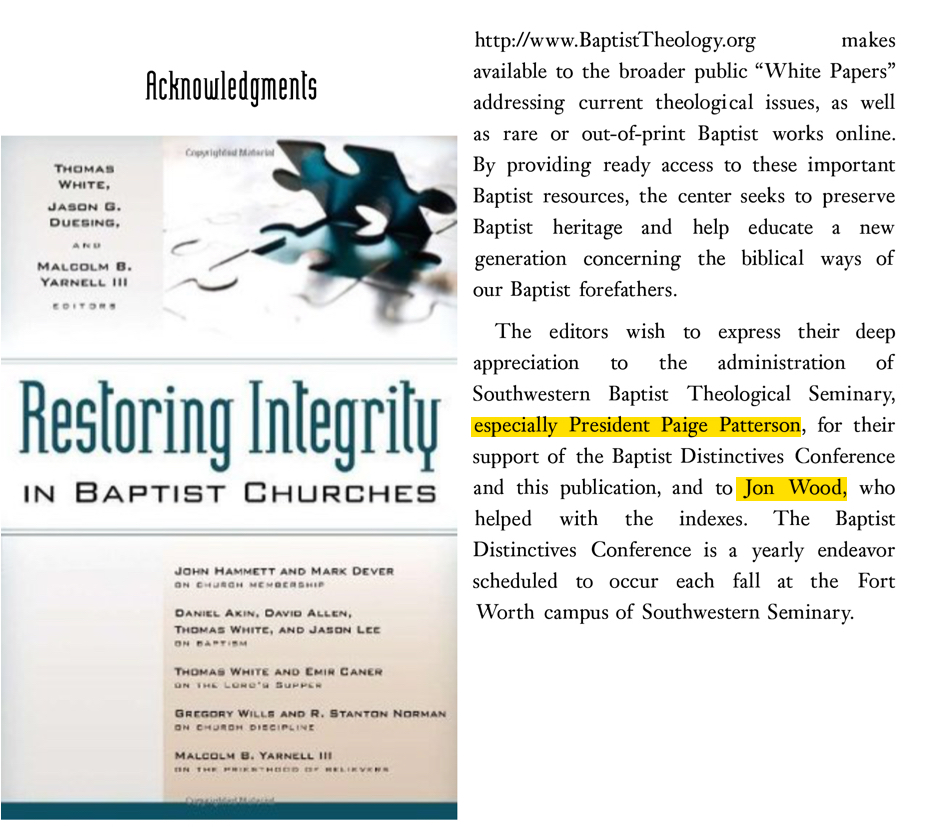 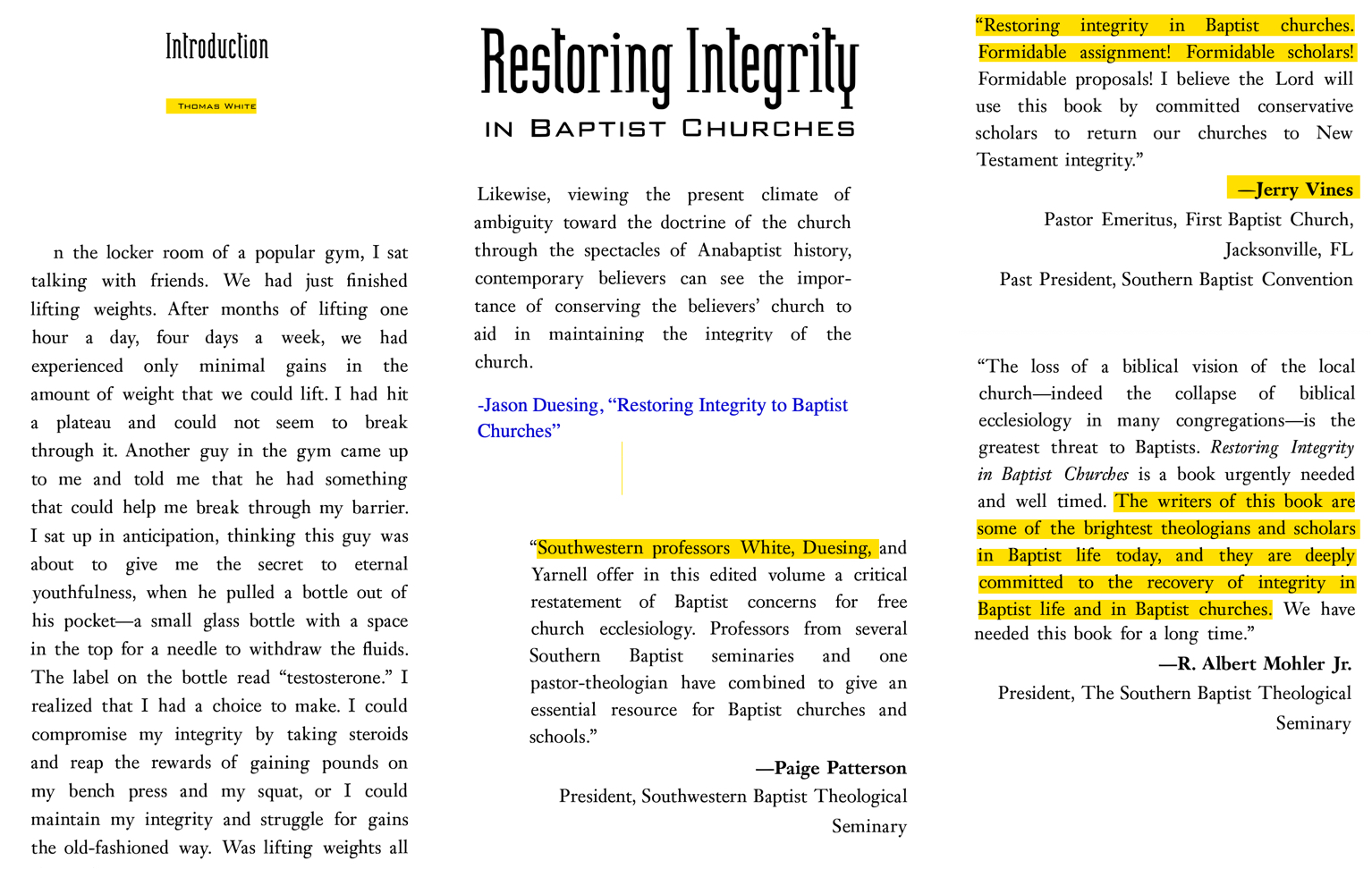 Duesing and White are also on the Board of Directors for CBMW. Danny Akin, President of Southeastern Seminary, is also on the Board of Directors. Additionally, Akin is also a member of the Cedarville University Board of Trustees.
I am cautiously optimistic that Akin will do the right thing in the Moore/White scandal.  I base this on the fact that he and Al Moehler are the only two “celebrity Christians” who have, to my knowledge, publicly disassociated themselves from C.J. Mahaney.
The fact that the CBMW Board of Directors includes Jeff Purswell (lapdog to C.J. Mahaney), Ligon Duncan (strident Mahaney defender), Wayne Grudem (Mahaney defender), in addition to Thomas White and Jason Duesing should raise legitimate questions about the organization. 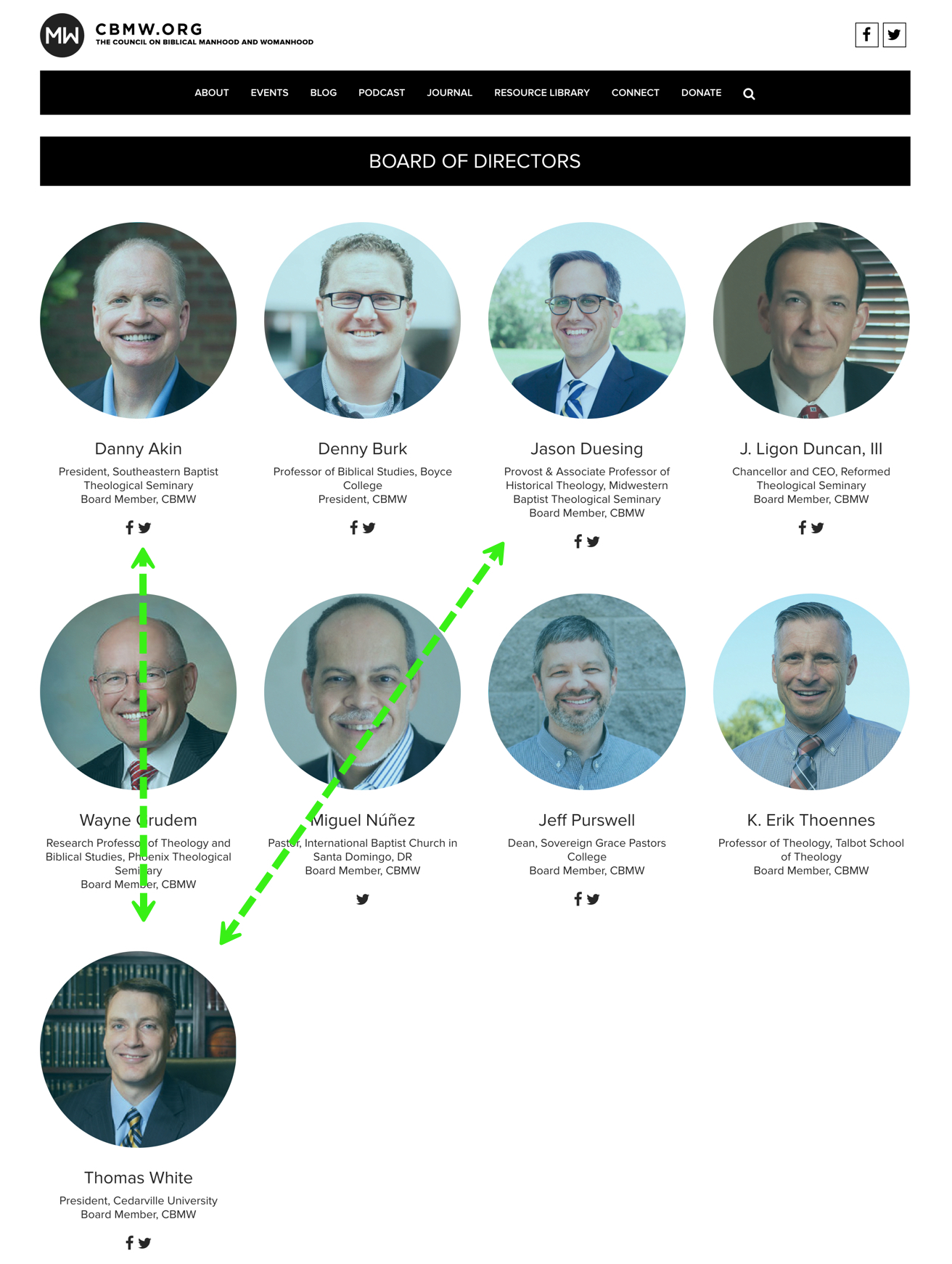 In summary, I believe Jason Duesing needs to recuse himself from the decision-making process on whether to retain or terminate Thomas White as the President of Cedarville University. I have no confidence that Duesing is capable of setting aside his friendship with Thomas White, Anthony Moore, and White’s loyal subordinates to enable him to make an impartial decision.