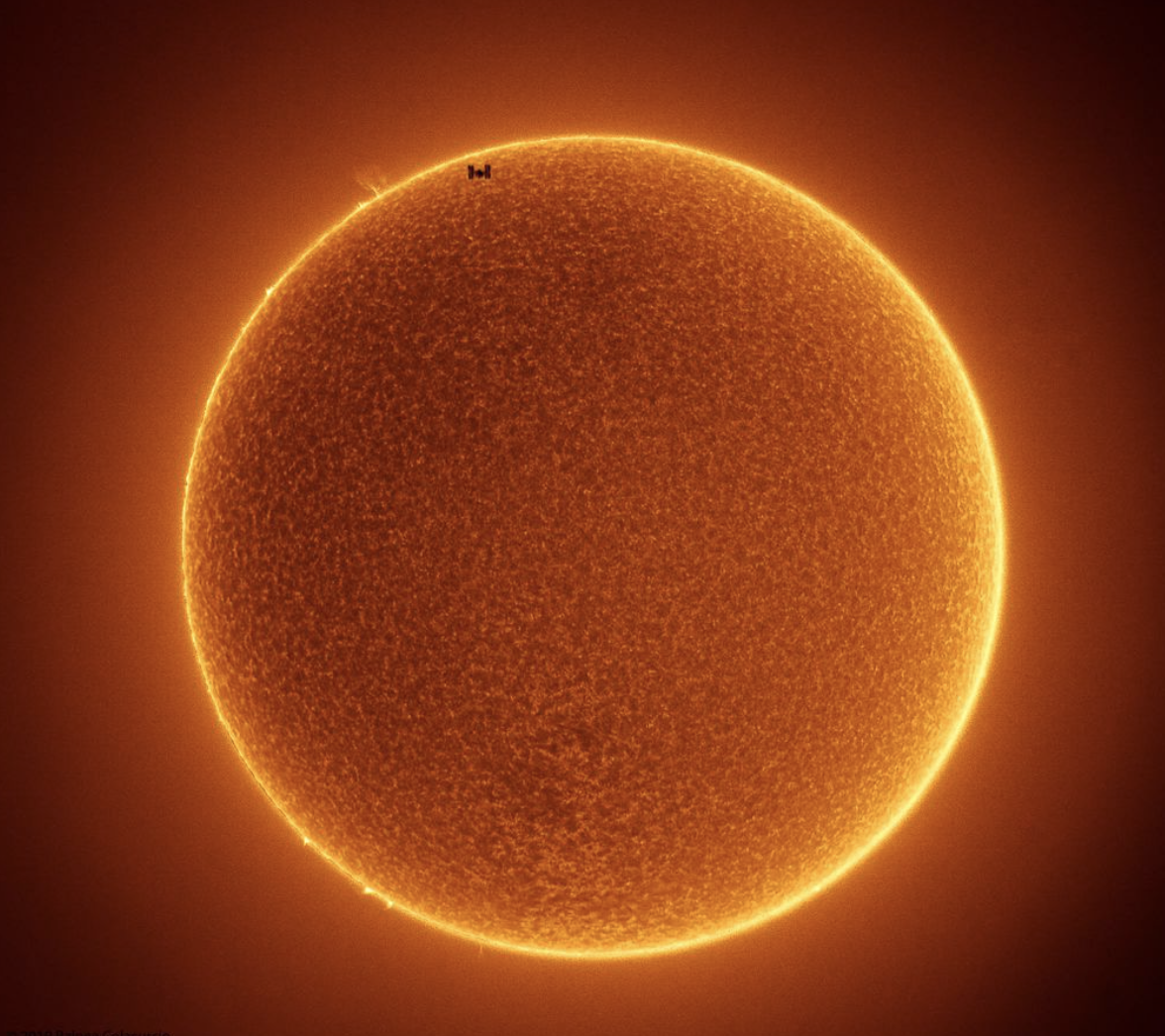 ISS across the sun.

High crimes: an offense that the U.S. Senate deems to constitute an adequate ground for removal of the president, vice president, or any civil officer as a person unfit to hold public office and deserving of impeachment.

I was distressed today. I really tried to believe that things were going to change in the SBC, especially when it comes to dealing with sex abuse and domestic violence.

However, we saw how the Credentials Committee responded to Jules Woodson.

We have learned that the 9 members of this small committee which is tasked with one thing, and one thing only…looking at disfellowshipping churches when they do something really, really bad when it comes to mishandling sex abuse, racial situations, homosexuality and whatever else they want to explore. My guess that will also include the role of women as leaders in the SBC

Yes, the SBC has prepared the *Caring Well* curriculum which all churches should or could receive and implement. But, they don’t have to since all churches are autonomous and I doubt highly that their refusal to implement the suggestions will result in the disfellowshipping their church. In other words, there are no incentives for a church to actually learn from the material.

There is no possible way for this committee to have a massive impact on the serious problems of sexual abuse in the SBC. Maybe the mere fact that they exist will be viewed in a positive manner… the *better than nothing* approach. My prediction for the outcome of this committee is simple. Not much will be done because the task before them is poorly defined and it has no teeth.

Yesterday, I saw this post at SBC Voices: The Credentials Committee: A Call for Patience (Susan Codone & Megan Lively)I had hoped that they would be able to offer us some understanding of the process that is supposed be forthcoming.

Both of these women were molested in the SBC. Both of them have been held up as role models for the rest of the SBC. One reported her abuser after being abused and was subsequently abused by Paige Patterson who wanted her to keep quiet. The other was very young and did not report her abuser after being abused. It is my fervent hope that neither of these abusers are still wandering around the SBC Thankfully, Paige Patterson got the boot for his involvement in keeping things quiet.

Both have received enormous support from the SBC leadership. I only wish such support was available to all of the victims. So it is understandable that they would be positive about the ongoing process. I would also hope that they would be equally understanding of the ones who were not raised up and supported.

Outrage expressed by advocates and victims may not be helpful in changing this large organization.

I am a big believer is showing outrage when children experience sex abuse in the church. I think it is a true expressions of the feelings of compassionate folks. I am not interested in playing games about how to best express pain in discussing the abuse of children in the church. There should be routine outrage e3xpressed each and every time a child is molested in our churches.

For good reason, a small army has risen to protest the harm this torpor has generated. Their voices are both valid and valuable.

There is a tipping point, though, at which genuine advocacy slips into routine outrage, especially regarding a large and lumbering religious system

Since both women were molested in the SBC, they have a reason to disavow the SBC but they do not since they believe that courageous leaders are paying attention.

this season of cultural change and reform succeed, and we believe there are courageous leaders paying attention.

However, I wonder who is getting the attention because there are lots of SBC victims who are not. It is quite easy to be patient when you are the ones getting the pats on the back. So, what is going to happen to the rest of the SBC victims who were abused and who must file their documents with the the Credential Committee.

Here is a link to the SBC Portal for all of the documents.

It is difficult to actually view the documents since one has to pretend to fill out the forms to get through the pages.

The first document is the Statement of Assignment.(Click to go to the next page.)

A submission may be made over any matter deemed appropriate by the submitter. It is important to know, however, that the Credentials Committee will not be able to consider anonymous submissions about a church. Recently, the Convention has heightened scrutiny in two significant areas of concern— discriminatory behavior on the basis of ethnicity and sexual abuse.

The Credentials Committee bases its decisions regarding a church’s standing in the SBC based on who that church puts in a leadership role as either an employee or volunteer. Neither the Convention nor its Credentials Committee has authority to declare an individual not in good standing with a local church. Church membership is solely under the guidance and governance of each local church.

It is important to realize that a church is not officially kicked out. It is deemed *not in friendly cooperation.* One should also note that the identity of the church submitted for review will not be released until they are not longer allowed to be friends. What does this actually mean?

There is some concern about protecting the identity of the victim. However, at this time, there is no set process to do so. The women in the SBC Voices post have some suggestion but nothing is sealed in stone at this time. Folks, be careful. Your anonymity is not, at this time, assured.

Upon receipt of a submission, the Credentials Committee may inform the church of the concerns raised against it. If necessary to adequately garner the information necessary to fully vet the concern, the identity of the individual or individuals making the allegations may be shared with the church. The Credentials Committee will seek to protect the identity of individuals who make a submission, or a church submitted for inquiry status unless and until it determines the church should be declared not in friendly cooperation with the Southern Baptist Convention.

Here are the links to the the three sorts of submission.

The Southern Baptist Convention’s Credentials Committee is working with a mental health center to provide a support phone call to those who have submitted a report to the Credentials Committee. This call will be from an individual trained to assist victims of sexual or other forms of abuse and will include a) information about the abuse recovery process and b) identification of resources in your local area.

It is interesting to note that there is some sort of SBC Credentials Committee cooperation with an unnamed mental health center. I would suggest finding out, a priori, which group is providing this assistance. Why is the group unnamed? How are they being reimbursed and how much?

Is it a *biblical counseling group?* What is the name of the center?

Is it a group affiliated with SBC lawyers? Be careful here, folks. The Catholic Church involved their lawyers to do intake on their hotline calls. This information was ultimately used against the victims. It is imperative that the information for this group is fully shared.

Here are some other forms that the person reporting must submit. 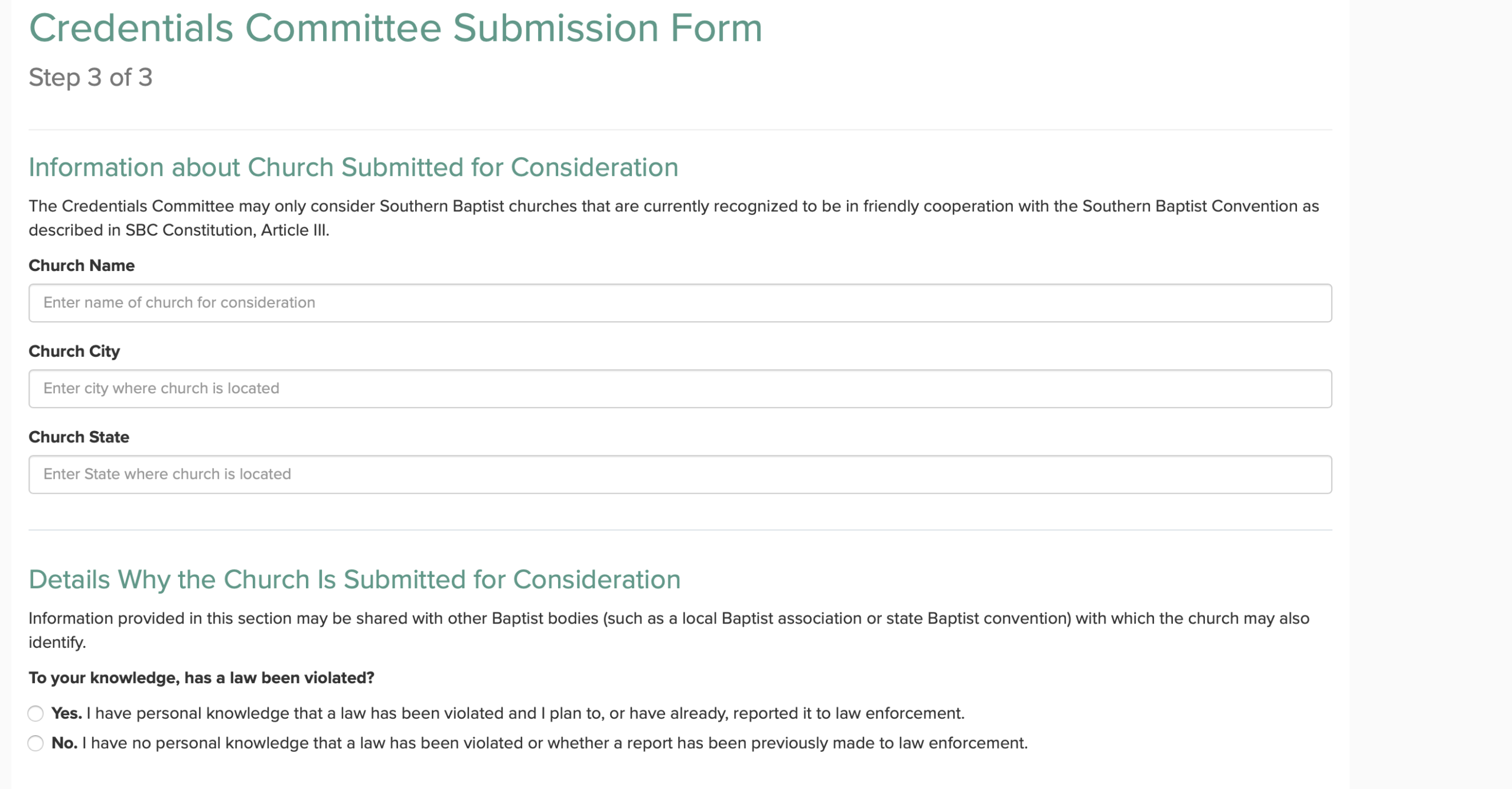 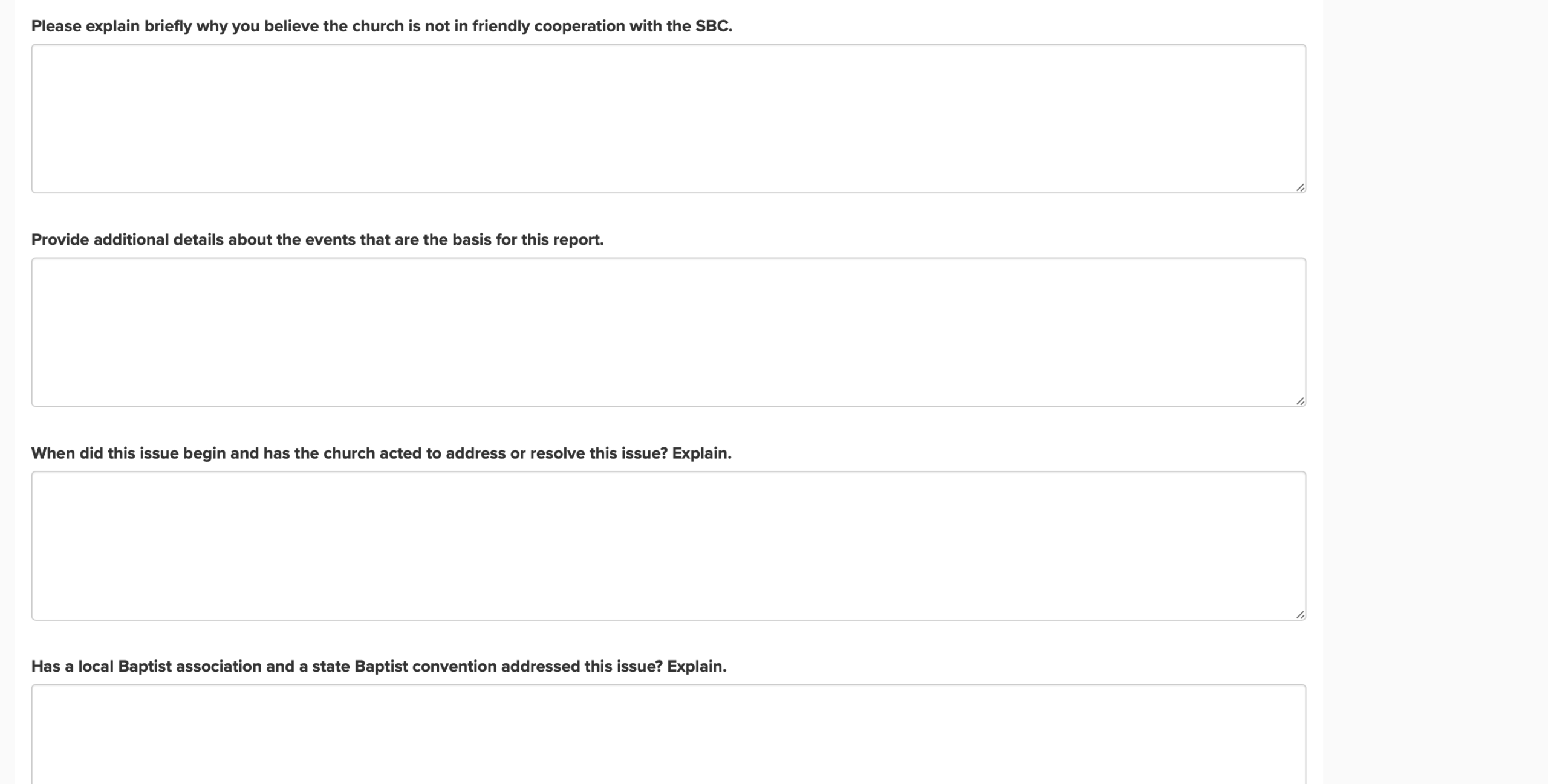 Back to SBC Voices:

Give the Caring Well curriculum time to *soak in.*  So how long is that?

Neither Megan nor I are representatives of the Convention and we cannot defend the actions of SBC churches to protect sexual abusers, tolerate racism, or other problematic issues. But as survivors ourselves of high crimes from an SBC church and entity, we ask that the Credentials Committee be given time by SBC members and observers to refine this policy as they begin to deal with submissions. The Committee is a balanced group of our brothers and sisters, navigating a new and complex path. Megan and I also ask that the Caring Well curriculum be given time to soak into the training fabric of SBC churches. Continuing reports of predators do not negate the validity of Caring Well.

It will take years!

Training, education, and better policies are the bedrock of institutional culture change, and all take years to become established.

Here is a question I asked Megan and Susan on that post. They did not answer me.

Work your way through these forms. I am interested in hearing what you pick up.

In the end, I don’t expect much will happen. Heads were supposed to roll after the Houston Chronicle investigation. The churches were exonerated before the ink was dry.

Let me predict what you might see. The committee will find one noninfluential church to be given the left boot of fellowship. The rest (especially if they are mega with lots of money) will fall by the wayside and still get front row seats at the conventions.And we will continue to wait years and years and years…