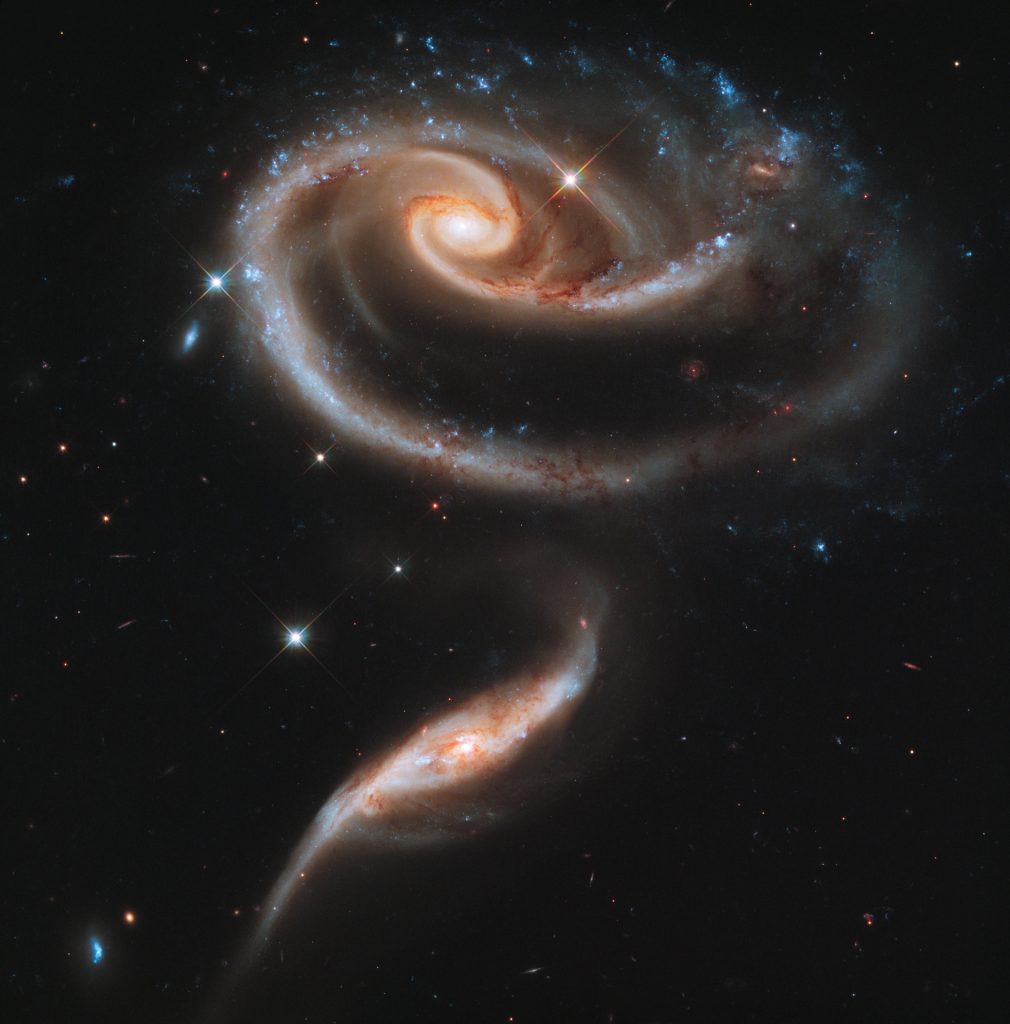 If you watch most of the stuff on TV and in movies, it’s usually put-down humor. It’s like somebody being mean or cynical or thoughtless to another person. I never wanted to be that type of comedian. Paul Rust

Today was an eye opening and also deeply upsetting time for me on Twitter. However, I learned something. We have a real problem in the SBC Executive Committee and I’m going to prove it to you.

Let’s go back to two posts to: Observations of SBC#19 and a Condemnation of The Founders Who Disrespected Victims of Sex Abuse at the Rally

In that post I explained how the Founders had done a *gotcha interview* with Ashley Easter and Kyle Howard. They did not properly identify themselves in an understandable way. Most people do not know who The Founders are. I will be getting our blog up to speed on them in the coming weeks because I believe they are going to try to prove their point that there are *liberals and heathen!!!* masquerading as true blue Christians in the SBC.

I believe that you are going to see more and more articles condemning SBC pastors and leaders who might take a softer view of the role of women in the SBC. Here is one written by Jared Longshore, the documentary interviewer: Will The SBC Do The Wade Burleson?

I am suspicious that *friendly* groups are behind this piece of nonsense. Beth Moore’s Beliefs on Homosexuality Are Called into Question in Open Letter from Bible Teachers

So what did Moore do this time? Well, she is friendly with those who support homosexuality….well at least two people.

The letter continues, focusing heavily on Moore’s seemingly close relationships with two progressive Christian authors, Jen Hatmaker and Jonathan Merritt, who have openly shown support for the LGBTQ community. Merritt has even expressed that he had “at least one homosexual encounter about a decade ago.”

The letter notes that Hatmaker and Merritt are “known for their belief that practicing homosexuals can be Christians” and questions if – since Moore is adored by them both – she too subscribes to the same ideology.

The letter, however, does not make a definitive assumption and instead asks Moore to answer this series of questions regarding homosexuality:

You know, a long time ago, I  had a friend who did stuff like this. I was quizzed on who I voted for. I got her check mark of approval. Then, horrors upon horror, she discovered that I was still friends with those who voted otherwise. I was no longer worthy of her friendship because I was not a purist. I guess friendships are OUT if the person is gay or affirms gays according to these whiz bang Bible teachers.

Go on over to Debbie Lynn’s blog which posted *The Letter.* Be sure to scroll down and read the links. However, read her mission statement.

In obedience to 1 Timothy 2:11 and Titus 2:3-5, I intend this blog for women only. I desire to help women grow in their understanding of God’s Word so that they can turn from doctrinal error and distractions that weaken so many professing Christians. Persecution is coming. I pray that Christ will prepare women to stand faithfully for Him as we face opposition.

No, they are not Founders but they are definitely eligible for membership.

The Rally and the Founders

So, getting back to the post on the Rally and the Founders let me reiterate my concerns ing a clear fashion.

Ashley Easter and Kyle Howard were approached by some people they did not know in the midst of multiple interviews. These guys mention they were *founder*, like anyone outside of their small circle know who they are. They stuck a mic at them while Tom Ascol, big, brave, manly President stood nearby with Tom Nettles, wearing a lapel mic.

So, did they show deep concern for sex abuse survivors? Nope. They were interested in things like *women preachers* and dates at which gender is assigned. This was a Rally for changes dealing with sex abuse.

Did the Founders’ interviewers get booted from the SBC Convention hall?

Is it true? (Paul followed up with more tweets.)

So, did they decide to mosey on over and have some fun with the Rally participants? They sure as heck avoided me?

Needless to say, I asked some questions on twitter. This brought out Tom Ascol’s kids to defended. Ascol, who could have nipped this in the bu with a simple apology for not being clear, jumped into his hidden hole and got friends to begin the attack. I’m shocked that Tom hid since he is all for *real masculinity* which I assume he wishes to role model except he didn’t.

Then, Rod D. Martin of the SBC Executive Committee appears and it all goes downhill.

It appears to me that the SBC Executive Committee should have approved of this sort of exchange with victims of abuse which makes me really, really worried for what is going to be happening in the year ahead. Did they? Do they? I’m not holding my breath.

Martin has a mean streak. He was obviously on the offensive, defending The Founders while Ascol went into hiding. This was a deeply disturbing series of tweets which raises questions about how much the SBC Executive Committee really cares about victims.

I will be listing some of his tweets but would urge you to go to his Twitter feed to read all of them. A number of us responded to him but he was difficult. If I were a victim, I would consider steering clear of him, especially if one has experienced abuse at the hands of any SBC pastor.

The SBC changed their constitution only because they were exposed for their lengthy and despicable history of sex abuse and coverup. No Houston Chronicle; no change. The SBC is now viewed as a the new RCC by most of the world and is also seeing a drop in membership.

This caused a number of jokes behind the scenes. His entire tirade was an example of not *believing the best about fellow believers. However, he may not view many of us as believers so he can insult us.

He constantly claimed that this was a protest, not a rally. Now why would that be?

Do you see what he does here? He attempted to place The Founders little documentary/interview as a real interview ala media. It is not. There appears to be an agenda. One doesn’t *reach out* to sex abuse survivors by asking about LGBTQ issues or gender assignments etc. Thoughtful individuals don’t handle things like this. The Founders are out to prove that the SBC is under attack by *liberals.* Rod D. Martin appears to be a *protector* of Tom Ascol.

This is just plain mean.

Notice who Martin names as a person who would not be questioned by those in the Rally. He is again trying to link the Rally to leftist politics. This should help you to understand what the agenda is. The Rally is bad, full of liberals and unbiblical people.

Continues to be mean and sarcastic.

See, he believes in gotcha journalism as opposed to thoughtful interchange. It really is cool to hide who you are, isn’t it? Just like Jesus.

He said this to one person who made the mistake of telling him he/she is a lawyer.

He refuses to say what the interview is about. He is covering for Tom Ascol who appears to be afraid of answering question.

And now, the libel card. Yeah, right. This is an old timey Baptist preacher tactic in order to scare the uninitiated into stopping a discussion of an inconvenient truth. Thankfully, my good friend, Jeff Anderson, prepared me well for this nonsense. 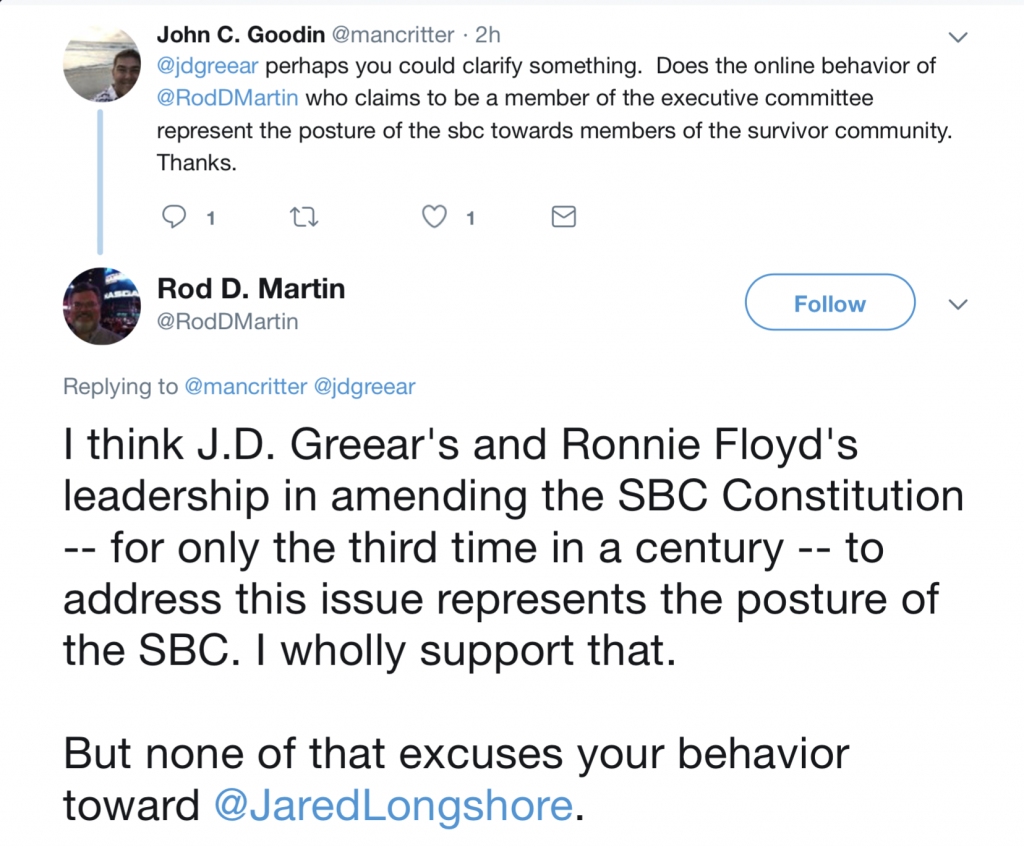 Good job, John. Sorry. But none of us are impressed. The SBC’s behavior makes them look suspiciously like a bunch of con men, waiting to get caught. They got caught.

At this point, I was frankly in a state of shock. I could not believe that an SBC Executive Committee member would behave this way to see abuse victims and their advocates. It appears that my suspicions are correct. Sex abuse is not the real agenda. It’s smoking out the liberals, however they define that to be.

Brent Hobbs shows there are some decent people who get it within the SBC. 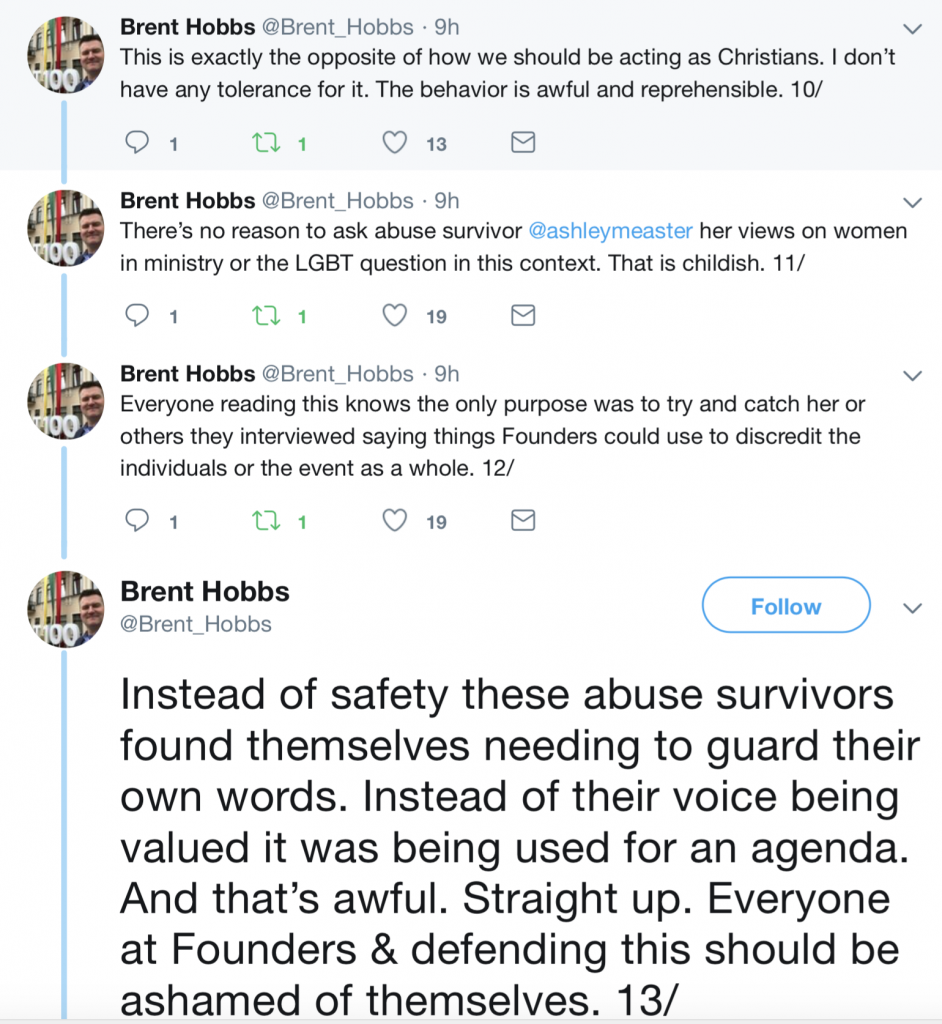 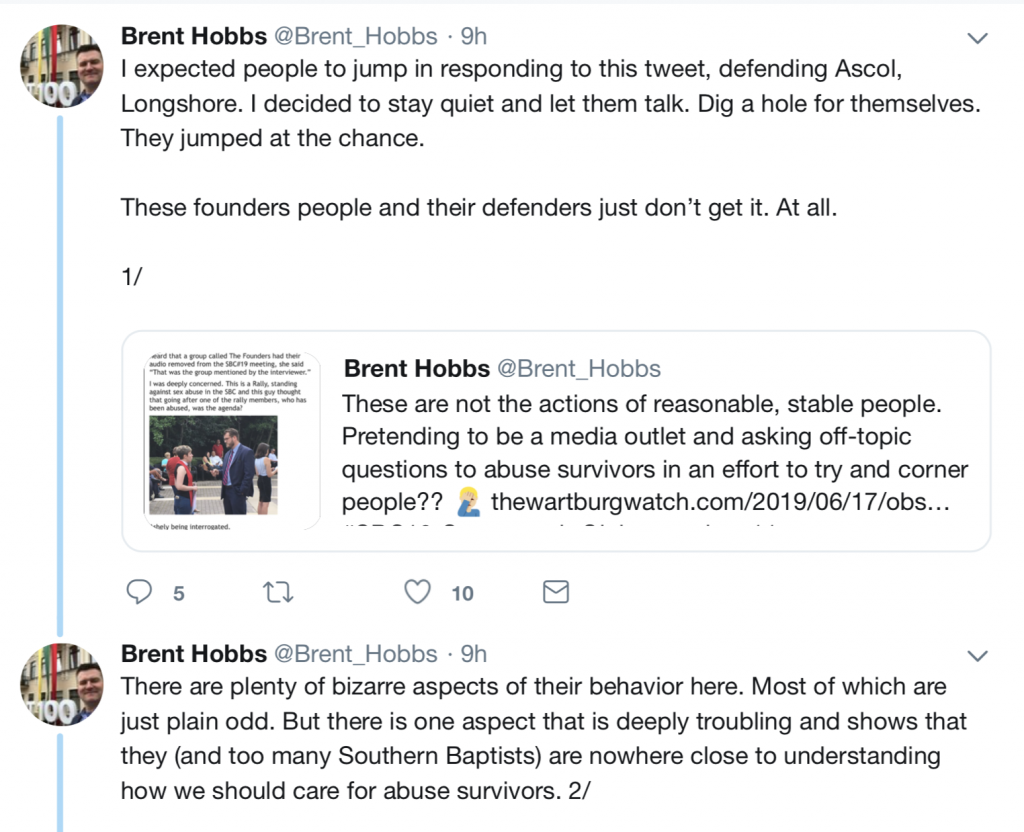 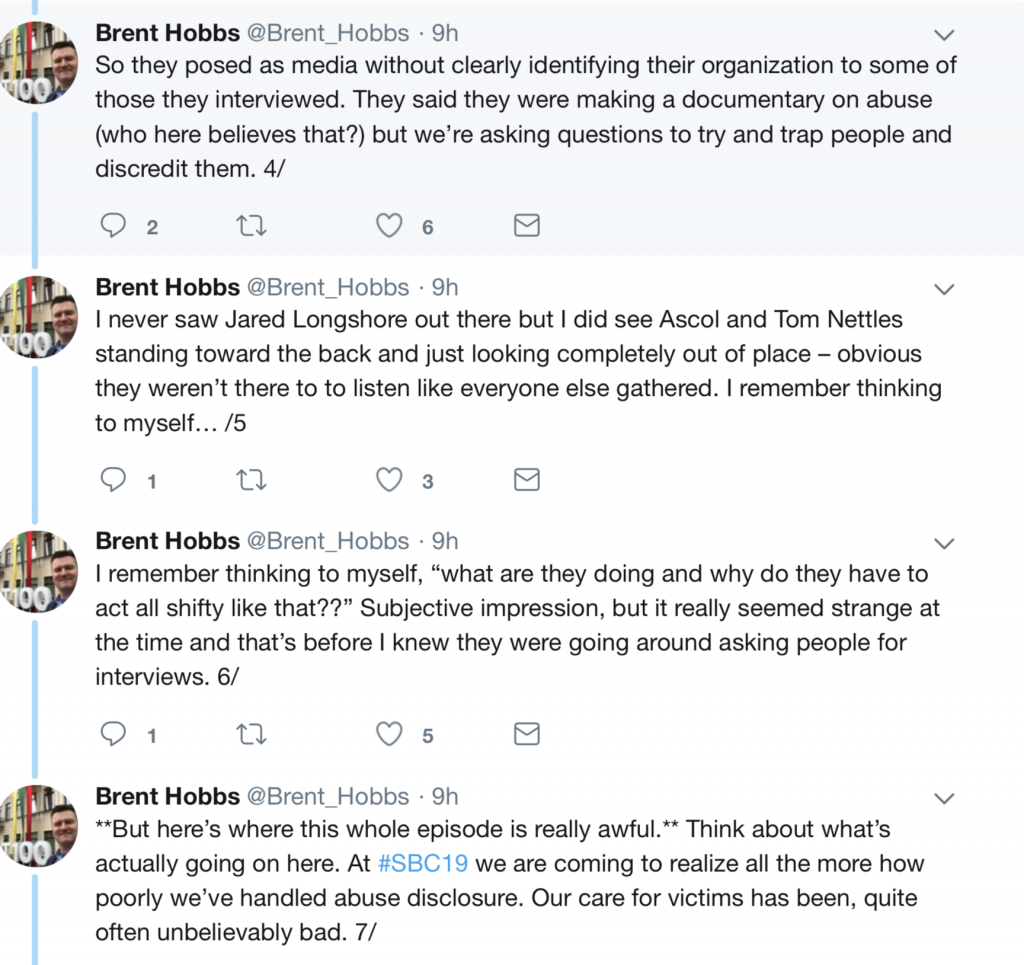 Where are we at?