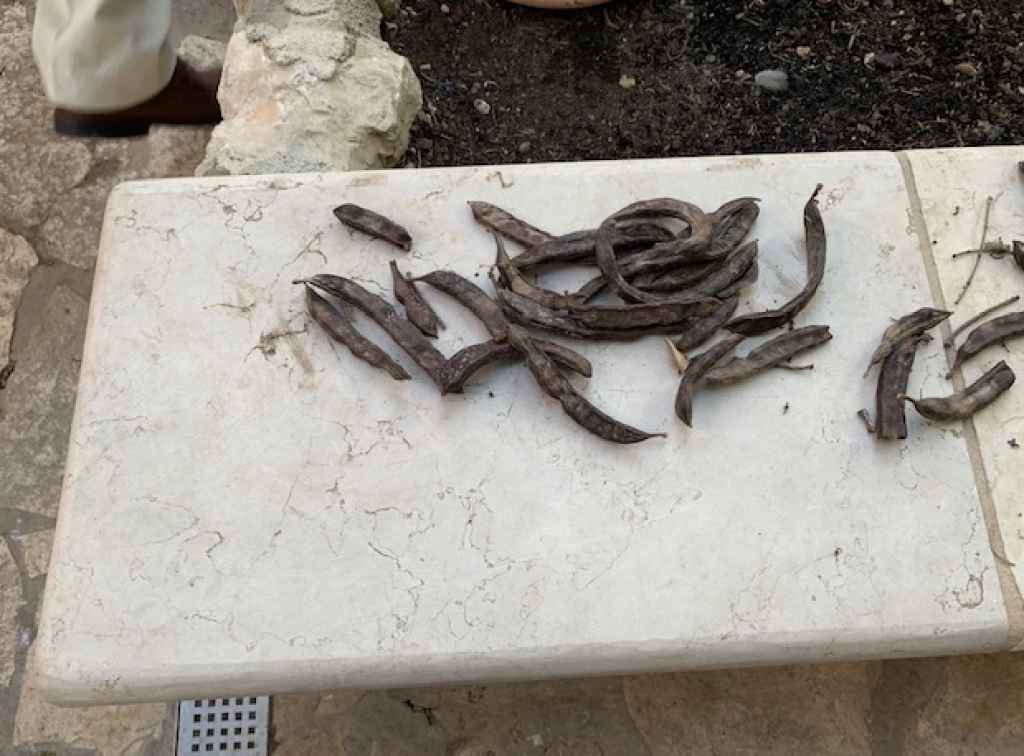 Pods from the locust tree

“No struggle can ever succeed without women participating side by side with men.” Muhammad Ali Jinnah

Deep down inside, I used to get a bit grossed out by the diet of John the Baptist who supposedly showed up on the scene eating locusts and wild honey. I had to dissect a locust when I was in a high school biology class. It did not go well. The inside of the locust was basically a disgusting mush and I was unable to identify any required organs.Thankfully, my view of John’s diet has taken a turn for the positive due to my trip.

The very first day I was introduced to the locust tree which is also known as the carob tree. Here are 10 Useful Facts About The Carob Tree

6. Carob pods can be ground into flour and used as a cocoa substitute for chocolate flavoring.
7. Carob contain just 1/3rd of the calories of chocolate  so great if you are on a diet.

Yep-it’s kind of like chocolate. So it is believed that John ate honey and a form of cocoa from the locust tree which makes his diet sound little less weird!

Honey is found on every buffet I saw in Israel. Even more fun is that our morning buffets would feature a huge honeycomb dripping honey onto a serving platter.

This locust thing was a good lesson for me. It is important to understand that our views of Scripture can be biased with our modern or limited cultural understanding which brings us to the reason for this post.

Recently a story appeared in The State Pro-life activist opposes photo of SC women lawmakers, says they are unfit to serve.

A request to hang a group photo of the General Assembly’s female lawmakers in the State House led to an uncomfortable debate Tuesday in which a pro-life activist urged lawmakers not to endorse such symbols of “destructive and evil” feminism.

…Lefemine had passed out packets of anti-feminist literature, expressed his view that the Bible says women are not fit for public office, and read aloud from an article titled, “The Feminism of the Mothers is the Destruction of the Daughters.”

…Just as Lefemine began to explain Tuesday why the “Biblical doctrine of the headship of man disqualifies a woman from civil office,” state Rep. Russell Ott interrupted.

…Rep. Ann Thayer, R-Anderson, the only woman on the committee, told Lefemine that female legislators feel called to their positions, and that some pray before taking them.

The debate was over a moot point.

There is a decade-old moratorium on placing additional monuments on the State House grounds or in the State House, meaning the composite photo of the General Assembly’s Women’s Caucus will need either an exception to that law or an alternate home.

Recently, The Gospel Coalition posted an article 5 Myths about Complementarianism which can be found at the Crossway website. The article was written by a husband wife team, Andreas and Maragret Köstenberger who teach at Midwestern Baptist Theological Seminary which is very devoted to the New Calvinist Baptist movement. You need to remember their names because they frequently write about the need for strict complementarianism. This particular article is a bit alarming to me because one needs to read carefully to understand what they are saying,

The Genesis 3:16 ESV ploy: Women are just a bunch of contrarians and that is why they need a male head.

They begin their article attempting to disprove that complementarianism is not obsessed with male authority. However, in the second myth, they proceed to denigrate women but you have to actually follow what they are saying.

At the creation of the first woman, Eve is presented as a companion and helper to her husband (Genesis 2:18). This portrayal is then reflected in the judgment she receives after the Fall: pain in childbearing and relational struggle in marriage, directly corresponding to her divine calling in relation to her husband and children (Genesis 3:16).

How many of you remember what happened when the ESV was released? A maelstrom ensued because the *author/translators* claimed that they would not make any subsequent translation changes. Do you remember what it was about?

Here is the verse in question. Genesis 3:16 ESV:

To the woman he said,“I will surely multiply your pain in childbearing; in pain you shall bring forth children. Your desire shall be contrary to your husband, but he shall rule over you.”

In other words, somehow the translators mix something up. Here is a short and effective rebuttal to this translation. Why the ESV’s “contrary to” in Gen 3:16 Matters by Scot McKnight

The consequences of sin for Eve, as Macintosh points out, are ‘defined against [this] background of [the] radical complementarity of the sexes in creation: precisely where woman’s joyful fulfilment in life is found … here now is the burden of pain, and of subordination.’ Just as her childbearing is a ‘good’ now tainted by pain (3:16a), so too her ‘devotion’ is a good now tainted by domination (3:16b). In my opinion, the only ‘contrariness’ in Gen 3:16b exists in the husband toward his wife.

McKnight’s summary is important because he appears to suspect that this translation was a way to slam home the one the TGC/Reformed Baptist objectives which is to place women under the dominance of men.

To repeat, for “el” to mean “contrary to” the woman’s “desire” must be negative. One has to wonder if the ESV’s translation is not an ironic manifestation of the dominance of the man over the woman.

I suspect that the Köstenbergers would attempt to deny that complementariansim should be applied as that guy did in South Carolina but I’m not so sure they can wiggle out of it that easily. Don’t you see, women are problems and that is why they need a strong hand to guide them ala ESV Genesis 3:16?

Should women really be working outside of the home and family? What is their gender specific creation purpose?

Read carefully. They mention the Proverbs 31 women so it is possible, so they say. But watch how they pull their punches.

The need for each woman, then, is to determine God’s particular leading in her life as to involvement outside the home (work or otherwise) at any given stage of her life as it relates to her primary role in the family. Yet there’s no need to back away from God’s design for women as centered in family and home, barring extenuating factors such as the husband’s illness, etc.

Overreactions are common, however, such as insisting that women may engage in any activity outside the home with virtually no or minimal concern for God’s specific creation purpose for each gender.

What do you think they are really saying?  Note, as well, that they couch this by saying it is OK for her to work if her husband is sick. However, could they be saying more? For example, I know a female physician whose husband stayed home with their children. While at home, he created a home business. However, some members of TGC have claimed that men who stay at home are *man fails.*

This is important to understand. They believe the Bible claims there are irrevocable roles for men and women that go far beyond *women cannot be pastors.”

Read this very carefully. Women are to be limited in many other roles.

we’ve increasingly heard it taught by complementarian pastors and other self-identified complementarians that the only restriction complementarians should impose on women is that of assuming the pastoral office; every other leadership role should be open to qualified women in the church. However, the biblical teaching on gender is much more thoroughgoing and profound than a singular negative stipulation would convey, a mere rule that restricts women from one particular (though highly significant) office, otherwise allowing unfettered male-female equality.

in other contexts where the teaching of Scripture or the exercise of spiritual leadership occurs, this should be carried out by qualified men. Barring women’s access to the pastoral office as the only limitation for appropriate participation in the church therefore reflects a simplistic and reductionist view of God’s design for feminine involvement in the church. It is the teaching and ruling authority that leadership roles entail that is at issue here.

Unduly opening all leadership roles in the church to female participation (except for the office of pastor/elder) without assessing other potential leadership roles for their suitability is hardly responsible,

Towards the end of this section it appears they indicate that the role of women is got be limited to: motherhood, partnership with their husbands, and teaching of other women only.

They consider this a *gospel* issue as well as an issue that undermines the authority of God and even undermines God Himself.

to neglect proper theology and practice in this or any area is to truncate vital entailments of God’s creation and the gospel. In some cases, this is done by compartmentalizing biblical truth into multiple levels or layers, which will inevitably reduce the effectiveness of the church and gradually corrode the advance of God’s mission in our world.

… If we follow suit and deny this creation reality, we’ll inevitably become complicit in undermining the authority of the Word of God and the One who gave it to us.

Yep, they are against abuse. They don’t get why it might be a problem.

They have a section to claim that complementarians do not abuse and are against abuse. I will beg to differ. I am on the receiving end of call after call from women who have been abused. Their complementarian husbands claim it is their fault because they do not submit. The Köstenbergers have inadvertently set up a paradigm to make abuse more likely.

Tell me why this might not lead to abuse in some circumstances. It is this paradigm that urges men like the guy in South Carolina to sidetrack women. These assumptions sound nice but they are not working.

It appears to me that the New Calvinist crowd is digging in their heels when it comes to attempting to strictly  define gender roles based on a peculiar reading of Scripture. There is a reason that The Gospel Coalition featured this article. If the Köstenbergers have their way, women will be relegated to the women’s balcony while the men continue to *discover* more and more things that women cannot do. It’s articles like this that overstate gender roles as a gospel issue that will eventually lead to fewer people listening to such nonsense.