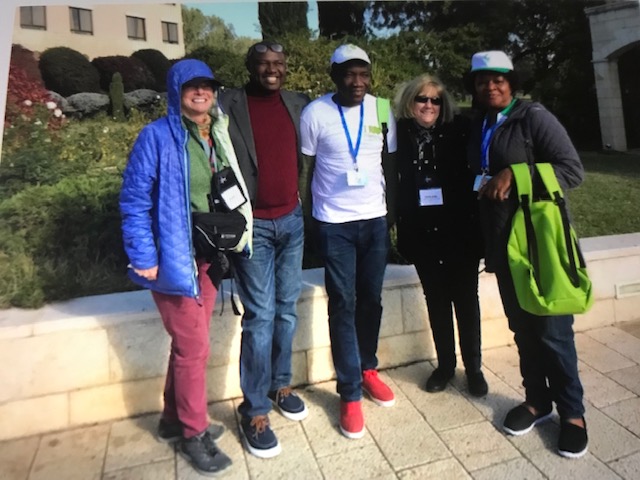 Dee with Nigerian Pilgrims on the Mount of Beatitudes

Just because something isn’t a lie does not mean that it isn’t deceptive. A liar knows that he is a liar, but one who speaks mere portions of truth in order to deceive is a craftsman of destruction.” ― Criss Jami

The day after arriving Israel, I went to get breakfast in our hotel. Many hotels throughout Israel and Jordan cater to large groups of religious tourists. Surprisingly, the buffets that were provided were excellent. I especially loved the impressive selection of local breads and cheeses. Riding down in the elevator, I realized that there were two other languages being spoken: Russian and Spanish. The dining room was filled with people from all over the world, many from Japan and Korea. Many people said that they were on pilgrimages. I saw Catholic and Orthodox priests surrounded by their people. There were Baptists everywhere and I even bumped into a group of Lutherans from the Missouri Synod. Bill, Abby and I were traveling with a group of Christian doctors, dentists, nurses and their spouses from around the US

That day we headed out to the Mount of Beatitudes. I used to picture it in my mind as some dry, dusty hillside. However, it was absolutely beautiful, filled with trees and flowers. It is located on the Sea of Galilee which is spread out below the Mount. Again, I was struck by the number of languages being spoken around me. I met a large and friendly group of Nigerian pilgrims. Their pastor asked if we could take a picture together which is what you see at the top of this post. We would bump into this group many times along the way and I have as cool story to tell about our time together in the prison in which Jesus was held the night before the Crucifixion.

I sat down on the grassy hillside and contemplated how the story of Jesus reaches across all nations and cultures throughout time and continues to draw people back to the place where it all happened. I began to understand why Jesus chose that time and place for his ministry. If he had come today, people would be hustling and bustling about, noses stuck to their cell phones, demanding He get on with His point. Instead He chose a time when people would be willing to gather on a beautiful mountainside and listen to Him for hours. My group then read the Sermon on the Mount in the quiet and beauty of this place. Our guide was a Messianic Jew whose Jewish family emigrated to Israel from Australia. He was wonderful but more on him later.

Blessed are those who hunger and thirst for righteousness,
for they will be filled.

Yesterday, I stopped the post at the point when James MacDonald decided to drop the lawsuit. It appeared obvious to me that he did this because he did not want the defendants (sorry about the confusion yesterday) to have access to some super secret documents. To observers such as myself, it appears that he didn’t want people to know where the money was going. Surely he understood how this would be viewed by others. Yet, keeping the information was so important that he was willing to risk the inevitable derision. I predict that the beans will be spilled in the near future. It always happens. Do you think Jesus intended for pastors and churches to conceal things in such a manner?

HBC elders continue to back James MacDonald in spite of constant controversy over years.

It came as no surprise that MacDonald suddenly decided that he needed a sabbatical. Not only a sabbatical from his pastoral duties, but a sabbatical in the sunny climes of Naples, Florida; far away from the cold of Chicago. By cold, I mean more than the weather…

For example, World magazine posted Julie Roys’ (You go, Julie!)) article Hard times at Harvest. The subtitle of the piece says it all:

Former elders, pastors, and staffers from Chicago’s Harvest Bible Chapel accuse the church of financial mismanagement and a culture of deception and intimidation

The leadership of HBC disputed this post, basically saying “Nothing to see here, move along.” They only wanted *unhappy Christian to find peace.” Seriously?

However, many were not buying it.

Harvest Bible Chapel has owned its mistakes and endured to become a happier and healthier church, whose members recently pledged — financially, in their walk/work for Christ, and in their promise to share Christ with others — at unprecedented levels. The anticipated attack that comes with God’s kingdom moving forward has come, sadly, not from those in the world but from other professing Christians.

We have chosen the high road and refused to engage in public assault on people we once served closely with who just can’t seem to “let it go,” even after all these years. The Elders are privy to many grace-filled private attempts to reconcile, extended in hopes that these unhappy Christians would find peace.

The HBC elders and the peacemaking process: Most *peacemaker* groups are biased towards leadership.

It appears that the elders got tired of tap-dancing and decided to pay others to take the heat off of them. Christianity Today posted James MacDonald Takes ‘Indefinite Sabbatical’ from Harvest Bible Chapel which links to a statement by HBC elders and James MacDonald on January 16,2019.

According to the elders, they suddenly realized that they had failed to address the increasing criticism over the last few years. This raises the question: Did they really overlook the criticism or did they discover that all of their seemingly abusive tactics only made things worse?

In my opinion, it seems the church leadership found themselves pushed up against a wall with nowhere to go. So they turned to the *peacemaking process.*

We have tried a variety of different strategies to address external criticisms over the past several years. It has become apparent that these efforts have failed to fully identify and address our personal failures, sins, and errors in leadership, thus perpetuating a continuation of the criticism. In prayerful reflection upon all that has happened and how we got here, a private meeting of the Executive Committee of the Elders on Monday, January 14, led to the decision to be part of a peacemaking process that seeks both reconciliation and change where needed, which was reviewed by the entire Elder Board last night.

TWW has written about such groups in the past. Most peacemaking ministries market themselves to church leadership. It is the church leadership that pays the bills for these expensive peacemaking sessions. I am of the opinion that the system is biased against the victims and biased towards the church leaders who pay the bills. Therefore, I hold out little hope for real, deep change in the HBC system. Maybe there will be some window dressing. However, the entire structure needs to be gutted and a new ideology and structure needs to be instituted.

James MacDonald and the Naples sabbatical: He’s getting out of Dodge and letting some hired *peacemaking group* deflect the slings and arrows.

MacDonald had this to say in the update.

“For a long time I have felt unequal to all but the preaching task at Harvest. I have battled cycles of injustice, hurt, anger, and fear which have wounded others without cause.

I have carried great shame about this pattern in certain relationships that can only be called sin. I am grieved that people I love have been hurt by me in ways they felt they could not express to me directly and have not been able to resolve. I blame only myself for this and want to devote my entire energy to understanding and addressing these recurring patterns.

I have long known and taught it is not about the messenger, it is about the message and I am grateful for a time of extended sabbatical, during which Harvest will be in capable hands. I may continue preaching at the Naples Campus through some of the winter season and have postponed all writing and leadership to begin in earnest now. I will continue this focus as long as it takes and participate wholeheartedly as requested in the process shared above.

Please pray that this welcomed time of sabbatical rest will lead to needed changes in me and a fresh opportunity to reconcile with others in God’s time.

I recently spoke with a person who said that MacDonald has pulled the *mea culpa and forgive me* routine in the past. After attending his church for many years, they left. They said they didn’t buy his crocodile tears then and they don’t now.

Look carefully at his statement. Here are some of my thoughts.

This situation proves that some things never change which gives me little hope for improvement in the HBC system. The Christian Post published Harvest Bible Chapel-Naples pastor fired amid fallout over James MacDonald sabbatical, scrutiny on January 20, 2019.

It looks like MacDonald did not consult with the current pastor, John Secrest, of HBC Naples, before announcing to the world that he would be preaching at that location. Secrest was not amused. His church had only become the eighth location in MacDonald’s new empire in February, 2018, and he decided he wanted his church out of this arrangement.

In an email to members of HBC-Naples, Thursday, John Secrest, the church pastor, said he disagreed with the decision that the Chicago-based HBC elders made recently with the announcement that MacDonald would be taking an indefinite sabbatical amid scrutiny of the church yet would preach occasionally at HBC-Naples through the winter months.

Secrest explained Thursday that he wrote the elders, asking them to reverse this decision but they refused. The Naples site was originally planted in 2016 as an independent church but partnered with Harvest Chicago in February of 2018, becoming its eighth location.

“Despite great efforts and reasoning, John has chosen not to yield to the consensus of our local leadership team or the elders of Harvest Bible Chapel. Conversations with John over the last few months, culminating this week, have made it clear that he no longer desires to work for Harvest Bible Chapel,” the elders said in a message to HBC-Naples members.

“Because of his continued unwillingness to yield to the direction of the elders and the insubordinate email he recently sent counter to the elder direction, it became clear that he should not continue in his role,” they said.

I believe that HBC Naples should, and will, pull out of HBC. Here is a piece of advice to Naples. Do not wait around for the peacemaking solution. MacDonald is not going anywhere.

Doesn’t this situation remind you of Mark Driscoll and the implosion of the once powerful Mars Hill entity? Unless radical changes are made, I believe this will happen to HBC. Pew sitters need to wake up and make sure their money is being donated to those groups which serve the lost and let down instead of the *have it alls.*

James MacDonald and HBC: Pay the legal costs of the defendants. Then I will begin to consider that there is real change afoot.