“Bravery is the choice to show up and listen to another person, be it a loved one or perceived foe, even when it is uncomfortable, painful, or the last thing you want to do.” ― Alaric Hutchinson 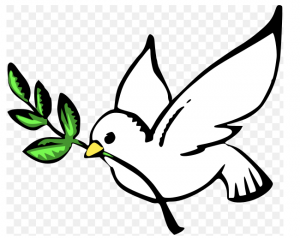 I’m closing the comments to this post and deleting all comments. I’m also removing the details of issues at Grace Episcopal Church. In it’s place, I will be posting the Protective order obtained by the church. There reason for posting is to point out that an Episcopal Church chose to take out a protective order on one of its parish ones, Eric Bonetti, who was accused of potential terroristic activity agains the church. A protective order is a public action and is available to be viewed by the public.

I wish things could have gone differently. One deleted commented suggested that I was involved in *smearing* the church. I have merely posted the concerns of Bonetti. Obviously, the concerns of the church are publicly available though the protective order.

Once again , everyone involved needs to turn the other cheek. Sadly, I’m going to enforce this buy making this post into an informational post with not chance for dialogue. I suggest that all side stay off of Fairfax Underground for the immediate future.

Last year, I wrote a post on the disagreement between Eric Bonetti and Father Bob Malm, his priest at Grace Episcopal Church in Alexandria Virginia. Eric felt bullied in the positions that he served at the church and complained to the Episcopal Diocese of Virginia about his situation. But instead of honoring his request to mediate the dispute, the Diocese rejected his request, and knowingly allowed Father Malm to retaliate against Eric by instructing church staff and clergy to exclude him from the church. Subsequently, I accompanied him as he met with members of the church hierarchy who, more than two years after Eric’s initial complaint, offered to mediate. At that time, in the interest of promoting peace, I voluntarily removed my original post.

The meeting between Eric, Father Malm and Bishop Shannon Johnston took place in Fredericksburg Virginia, a quaint historic town about an hour south of Eric. During that meeting, Malm agreed to end his shunning and other retaliation; Eric agreed to shut down his blog, which documented and criticized Father’s Malm’s conduct and that of the diocese.

It’s important to know that this agreement not to blog expressly extended only to Eric, not Eric’s family members. Indeed, all the room expressly agreed that they understood that the agreement could only extend to those who were physically in the room, and that it was likely that Eric’s family and friends would both continue to blog, and to remain critical of Father Malm’s conduct.

Eric has a very ill mother who is receiving palliative care for an end-stage diagnosis. She, along with other family members, were upset with how Eric was treated at his church and continued to blog. They are not subtle in their form of communication. However, Eric has no means of control over them.

Apparently Father Malm didn’t believe that Eric’s mom and cousins were doing the blogging and blamed Eric. As a result, Malm contacted the Alexandria police department, claiming that various words, taken out of context, constituted a threat. In addition, Malm made various claims about Eric, including repeatedly referring to him in writing to church authorities as “dysfunctional,” and “twisted.”

When the police reviewed Malm’s claims, they found that no crime had been committed. Instead, Wilbur Salas, an officer with the department, called Eric at work, claiming that Malm was “concerned” about him, and offering to mediate. Feeling that Father Malm’s real motive was to try to suppress criticism, and that Malm was far from genuinely concerned about his welfare, Eric declined the offer. At this point, thoroughly irritated, Eric resumed blogging, and his blog, located at www.bobmalm.com.

Having failed to convince the police, Malm then filed with the Alexandria General District Court for a protective order, claiming that he was “frightened,” and, again, taking various words out of context from the blog maintained by Eric’s family members.

To my surprise, in January 2018 the court granted Malm’s request, despite the fact that:

There were no other indications of an imminent threat of physical violence. Per the terms of the protective order, Eric cannot have any contact with Father Malm until February 2020, and must remain 1,000 feet from Grace Church, Bob Malm’s home, and Bob Malm and his wife, Leslie.

Eric immediately appealed his case to the Alexandria Circuit Court. During the discovery phase of the litigation, Malm repeatedly used inflammatory language, including referring to the case as one of “domestic terrorism,” claiming that Eric was inspired by a fictional church shooting in the equally fictional town of “Sugarland Texas,” and referring to Eric as a “serial liar.” I believe these statements are inappropriate for a member of the clergy, particularly when Father Malm has never discussed any of these issues directly with Eric, nor shown any bona fide pastoral concern over these matters.

Father Malm also refused to specify which blog posts he considered to be threatening, even after he was ordered by the court to do so.

At the same time, discovery revealed that, the whole time he was claiming that he feared for his life, Malm was minimizing the matter to church officials. For example, in an email dated December 31, 2017, he wrote to Bishop Shannon Johnston, saying, “Than (sic) you Bishop…the hardest part is dealing with my wife and one of my daughters….they give this so much more attention than this deserves….fortunately, all at Grace who know about it, understand Bonetti’s dysfunction.”

On at least one occasion, Father Malm also emailed police officials, asking if there was some way he could force Eric to shut down his blog.

As Father Malm became upset, somehow lots of people at the church became aware of Eric’s blogging. Malm interpreted what was being written as *threatening* to the church, his family and even the preschool. Indeed, some have responded very badly, with one young parishioner urging Eric in writing to commit suicide.

During this time, I was able to speak to Father Malm’s wife, who expressed her concerns to me. I made some points that, had they been considered, this all would have deescalated.

As the litigation progressed, Father Malm tried to subpoena Eric’s very ill mother, apparently not believing that she could write a blog.This action was not allowed by the court.

In addition, through his attorney, Malm repeatedly tried to convince the court that Eric’s blogging was a violation of the protective order, arguing that “this is a case of domestic terrorism.” This, despite the fact that the protective order neither mentions blogging, nor can it, as long as the content is not threatening.

Eric has notified both Bishop Shannon Johnston and the bishop suffragan, Susan Goff, about what he believes are Father Malm’s multiple courtroom lies, as well as the efforts to drag his mother into court. Neither has responded, nor does it appear that they have exercised any ecclesiastical oversight over Malm’s conduct. Eric also has filed attorney disciplinary complaints against church member Jeffery Chiow, who served as Father Malm’s attorney, asserting that Chiow deliberately tried to mislead the court with his claims that Eric violated the existing protective order, that Eric was not admitted to practice law (he was admitted to the Pennsylvania Bar in 1989), and that he did not previously serve as a police officer.

In late September, having spent more than $25,000 on the litigation, and having concluded that Father Malm was not approaching the matter with integrity, Eric dropped his appeal, deciding that things had gone way too far. He will live with the protective order. Meanwhile, he continues to blog about his experiences with Grace Church and plans to do so through at least February 2020. He also continues to protest on at least a weekly basis at a major intersection near the church, located near Virginia Theological Seminary, which Father Malm refers to as “dysfunction junction.”

He is interested in pursuing the stories of abuse in the Roman Catholic Church (RCC) and the mainline denominations and may write some posts for TWW under a new page we are creating for these stories.

I have had several good conversations with Father Malm’s wife, Leslie. She asked why he mentioned her adult family in his blog. I explained that he was concerned that they were the ones pursuing his ill mother. Again, I urged them:

Hopefully things will simmer down and the church, with help from the diocese, will pursue meaningful reconciliation based on a Christian understanding of the term, including:

Here is the Preliminary protective order 11/26/18. Click on link.

Here is the final order. 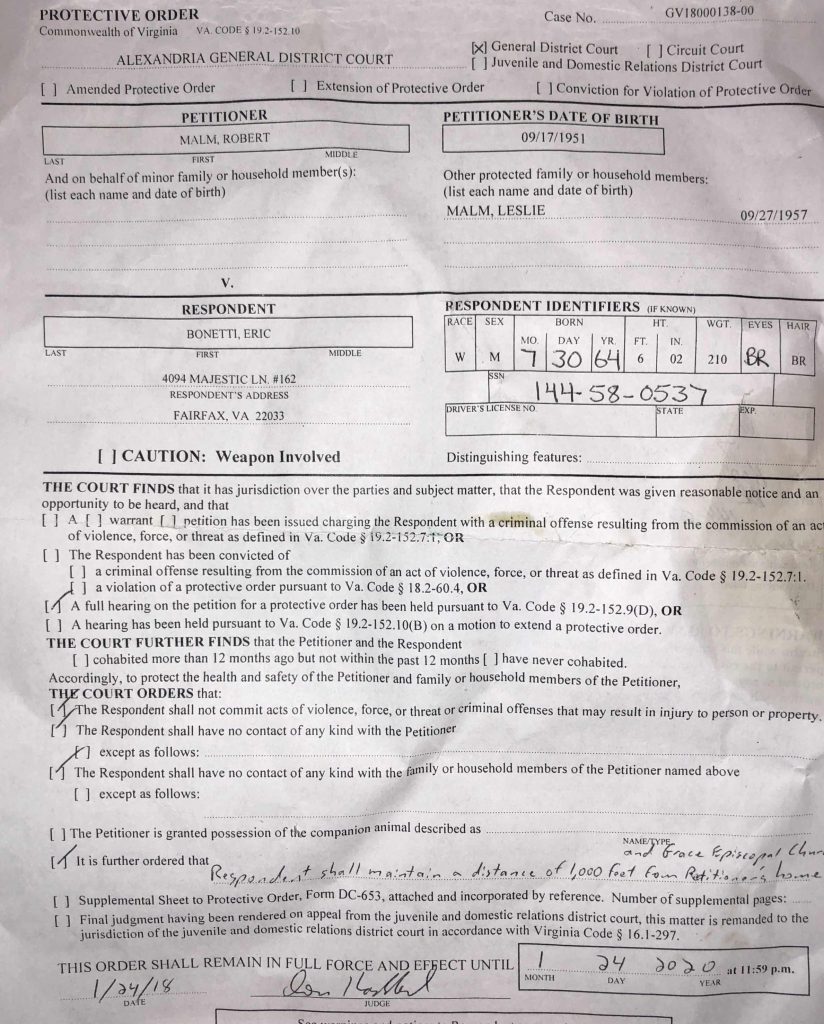 In closing, I want our readers to know that I have had some great conversations with Leslie Malm, Father Malm’s wife. She has been open about her feelings on this disagreement, yet was more than willing to listen to me as I tried to explain the intricacies of blogging, etc. I hope one day to take her up on her offer of coffee. In the midst of turmoil, there can still be beauty if we look for it. Leslie was that beauty for me..

I have great hope that this will end in peace. The key is for all to follow the One who turned the other cheek, even when on the Cross and in tremendous pain. “Father, forgive them…”

This is one of my favorite Christmas songs about peace in the midst of pain and hurt. It is my wish for all who have experienced pain. Listen carefully to the second verse.