“They like to use those fancy words. They don’t like to say “raped,’” he said. “They say “misdeed,’ “inappropriate touching,’ “mistake.’ That’s insulting. I’m not a mistake.” ― Charles L. Bailey Jr. 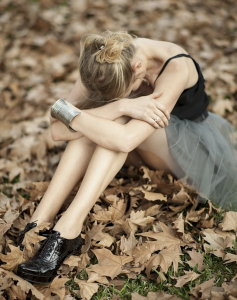 I think this post will serve as warning to anyone who posts on social media. Karen Porter positions herself as an international Christian speaker. That is important to me since it means she is listened to by many people, presumably all over the world. What she says may lead to consequences that can cause pain in those who have been molested in the church.

I’m a national and international speaker and the author of six books including Speak Like Jesus and I’ll Bring the Chocolate and my new book, If You Give a Girl A Giant…Fighting for you Life

I am the founder of kae Creative Solutions, communications consulting firm and the co-owner of Bold Vision Books, a traditional publishing company. I coach aspiring writers and speakers and teach on the national staff of CLASSeminars. I serve on the Board of Directors for several non-profit organizations such as CLASSeminars, First Place 4 Health, and Advanced Writers and Speakers Association.

Jules Woodson called my attention to the following comment by Karen Porter on The Premeaux Show Facebook page. The Premeaux Show made a strong and appropriate stance against the actions of Andy Savage and Highpoint Church. 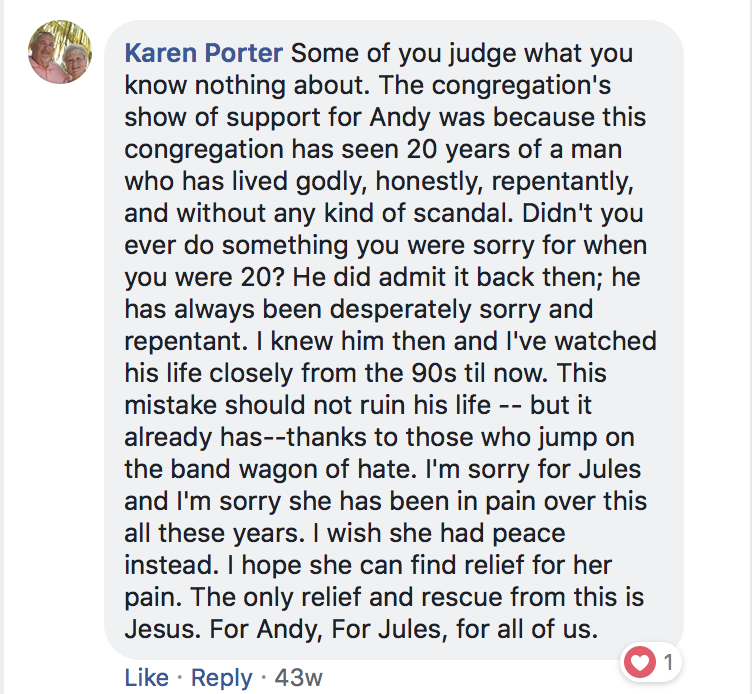 Now, the Premeaux Show was having none of her comment and responded. 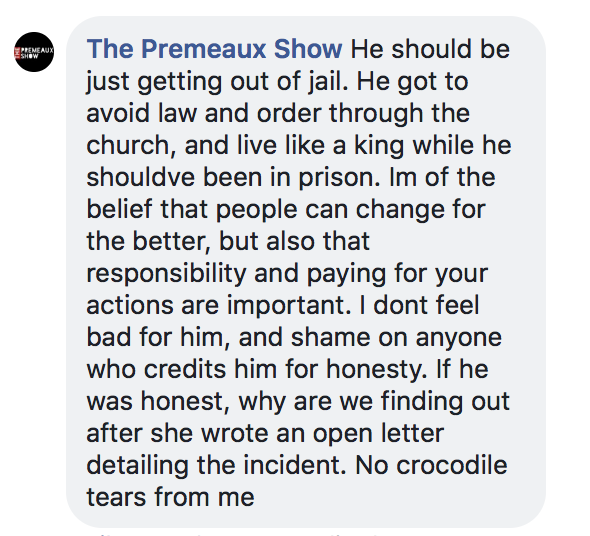 The following are quotes from Porter’s comment. Jules Woodson responds and reveals some *behind the scenes info” since she is in an even better position to challenge Porter’s thoughts.

Savage lived with Karen Porter and it was in her house that Savage played *tickle* with Woodson in his bedroom.

Some of you judge what you know nothing about.

She was not in the truck that awful night and she never talked to me after everything happened, though I knew her well, Therefore she knows nothing more than anyone else. The only thing I can guarantee she knows more than anyone is that she was the one with whom Andy lived. She was the one who came up to his bedroom when he had had me alone up there, tickling me, and told us we needed to go back downstairs and join everyone else.

She knew Andy was not to be alone with any of the girls in the youth group. However, with this statement, she tries to come across like she does know more and therefore her OPINION of my abuse and aftermath carries more weight/validity.

Had the happened in my house, I would have immediately reported this to all of the pastors (and announced it to anyone who would listen to me.) It would have raised red flags about Savage’s intentions towards Jules as well as other students in the ministry. Porter, an adult, should have realized the implications of such behavior. What actions did she take besides treating Savage like a little boy?

Savage lived an honest and godly life for 20 years? Nope.

The congregation’s show of support for Andy was because this congregation has seen 20 years of a man who has lived godly, honestly, repentantly, and without any kind of scandal.

This statement can’t possibly be true as the congregation had not known Andy for 20 years. They did not know what happened in TX until that day he *confessed* and received a standing ovation. They did not know that Andy lied to my Mom after my assault.

They also did not know that another woman would soon come forward accusing Andy of acting inappropriately with her at GBC, which happened after he abused me in TX, and to which she reported to another pastor. Yet nothing was done. Is that living Godly or honestly? Does that demonstrate true repentance? Just because someone has not been publicly caught in a scandal does not mean that they have not acted inappropriately.

Porter does not know what goes on behind closed doors and in the heart. She is making an assumption that he has lived in a godly and honest manner. To fracture quote The Princess Bride: 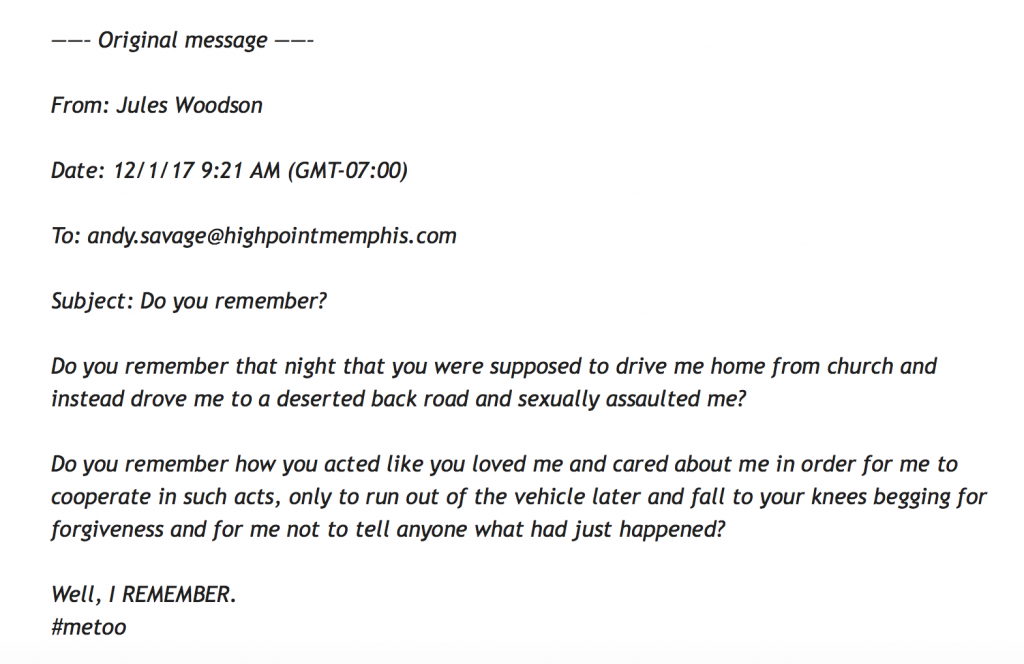 This molestation was just something to feel sorry about…

Didn’t you ever do something you were sorry for when you were 20?

Seriously?! First, lets stick to the facts…he was 22 at the time, and an ordained minister who was serving as my Youth Pastor. And NO, we haven’t all sexually assaulted someone when we were 20, or 22 for that matter. Let’s not forget he lied about what happened afterwards while apologizing. Does that show a truly repentant heart?

This was not a simple *something to feel sorry for.* This action was most likely a crime which should have been reported. I would like to reemphasize something Jules said. Most 22 year old people (and 18 year old people for that matter) do not assault people in the contect of their job. Health professionals, law enforcement, teachers, etc. serve with dignity and professionalism. If some 22 year old teacher did this to a student under their care, they would be arrested forthwith, receive a prison sentence and lose their credentials. I wonder if Porter would defend a 22 year old nurse who made the *mistake* of molesting her during an exam? I began my nursing career at 21 and I can assure everyone that I didn’t make the *mistake* of molesting anyone.

Porter claimed that Savage admitted his assault *back then.*

He did admit it back then; he has always been desperately sorry and repentant.

In his Ben Ferguson interview, Savage admitted to lying about what happened! Again, does that seem like the heart of someone who is desperately sorry and repentant? Also, if he was so sorry and repentant, why didn’t he ever make sure I was ok? This could have been done by making sure I got appropriate care from others (the church) afterwards. Why did he not respond to my email in December?

Porter claims to be a writer. She claims Savage was *desperately* repentant? Um, really? I’m no trained writer but I know words. Desperate does not describe the lack of intensity of his response in my book. He got out of Dodge, started life all over again by getting a new church job after only a few months of helping out in a real world job which was supposed to be some form of discipline… Most of us call that a regular job. No, the word “repentance” doesn’t jump out to me until he finally got caught.

Cognitive dissonance means that he couldn’t have done something bad because Porter would have know, it.

I knew him then and I’ve watched his life closely from the 90s til now.

He lived with Karen Porter and her husband, George, in their home while at my former church.  Of course she had a close relationship with him and trusted him.

This does not mean that she could possibly know all he has thought about and done, be it in public or private, back then and for the past 20 years. The only thing this does show is that so often, when an abuser is someone others are close to and trust, admire and respect, people are more willing to dismiss and/or excuse their behavior.

Porter sounds like the neighbors of serial murderers. You know the interviews of which I’m thinking. News reporter asks little old lady who lives down the street from the guy found to have killed 10 people. She acts shocked and says something like: “He was so nice to me. He shoveled my driveway. He did cookouts for the neighbors. I can’t believe it. I knew him.”

When I became a Visiting Nurse in my hometown in which I grew up, I was shocked to learn what goes on behind closed doors. Porter cannot speak to his heart in this matter. Only God knows our heart and intentions.

This mistake should not ruin his life.

This mistake should not ruin his life — but it already has–thanks to those who jump on the band wagon of hate.

Clergy sexual abuse IS NOT A MISTAKE! It is a CRIME! Speaking the truth is also not hateful. I did not ruin Andy’s life by telling the truth. Andy ruined Andy’s life by sexually abusing a minor in his youth group and lying about it. He took another job as a pastor shortly thereafter and mishandled the situation when the truth came to light this January.

Karen Porter needs to brush up on her theology. Sexual molestation is not a mistake. It is a deliberate act which is considered a sin (why doesn’t she use the word) and is also considered a crime by most reasonable people in our society. It is shocking to me that Porter thinks that molestation is just a simple mistake. I wonder if she would feel the same way if it happened to her or one of her friends?

I am shocked that any Christian leader would downplay this act as a *mistake* while calling those of us who speak truth about sexual molestation as a “bandwagon of hate.” I wonder. Is it hateful to speak out against out against child sex abuse? What about human trafficking? What about molestation of high school students in churches? Or is it only hate when it involves someone she knows?

She says she is sorry for Jules.

I’m sorry for Jules and I’m sorry she has been in pain over this all these years. I wish she had peace instead. I hope she can find relief for her pain. The only relief and rescue from this is Jesus. For Andy, For Jules, for all of us.

Dee responds to this:

Karen, you claim to be an international Christian speaker. Yet it seems to me that you have much to learn about sex abuse in the church. Sex abuse is NOT a mistake. Sex abuse is a crime. Sex abuse causes pain for a lifetime for many who have experienced such trauma.

You claim to be sorry for Jules. Yet, you blew your dime on defending Savage. Jules is now an internationally renowned personage. She is sought out by media throughout the world and is considered the face of the #churchtoo movement. Her story has been covered by most of the major media sources in the world.

Why is that? Why are they seeking her out instead of you “who really knows Andy?” The answer is clear to me. Jules opens a window into the darkness in the soul of the church. That darkness extends to our own individual souls which prefer to live in darkness by calling sexual assault a simple *mistake.*

I believe that you played a part in this story. You could have stopped things when you found Savage in a room with a student. You could have marched into the offices of the pastors and demanded that Savage be removed from his position. You didn’t and you continue to defend him to this very day. I don’t understand your actions and thoughts but you are on the wrong side of history.

I beg you to reconsider your position and your thoughts. That’s how you will truly demonstrate that you care for Jules.