Fallen man is not simply an imperfect creature who needs improvement: he is a rebel who must lay down his arms. C.S. Lewis 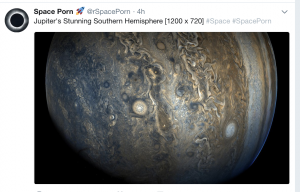 Initially I was sucked in by Tullian Tchividjian’s view of grace. However, as time went on, I realized that he was fixated on cheap grace. A grace that costs a person nothing. A grace that does not involve taking up the Cross and following Jesus. A grace that promotes the saint and overlooks the sinner. A grace that endangers the objects of abuse.

Tullian Tchividjian is the poster boy for clergy abuse. He had multiple affairs. He then tried to blame it on his now former wife. His current wife, one of his many affairs, is on her third marriage.

TT used his position as a pastor in order to attract women and engage in affairs. He is the poster boy for clergy abuse.

Although we wrote about this, our good friend, Julie Anne Smith posted An Infographic on Tullian Tchividjian’s Pursuit of Women and a Public/Publication Platform if you are not up to date on TT’s downfall.

Now onto my little dustup with KCBI.

KCBI Is a radio station, specializing in Christian programming in the Dallas Fort Worth area. Their motto is “Encouraging Music Word of Hope.#

Here is what they say about themselves.

WHAT WE BELIEVE
KCBI is operated by First Dallas Media, Inc. As a Christian ministry, FDMI proclaims biblical truth found in the Word of God. We seek to be Christ-like in all our views and actions. As a 501(c)3 non-profit, we’re allowed to offer supporters the benefits of tax-deductible giving. As listener-supported Christian radio station, we’re able to offer music and teaching that encourages listeners and impact more lives for Christ.

Why KCBI?
We believe KCBI is a movement of God to communicate the Good News of Jesus’ love & transforming power.

Our Mission
KCBI exists to be a discipleship force for Jesus Christ in North Texas:
To be a Great Commission mission, we are called to grow our impact in Dallas-Fort Worth making disciples as called by Christ. Therefore, we seek to offer encouraging music and words of hope from the Bible.

Core Values
Bible-Minded (what we care most about)
God’s Word is our guide as we communicate its truth in everything we do and say.

KCBI says that they communicate the truth of the Bible in everything they do and say. A few people on Twitter drew my attention to this KCBI tweet  It appears that TT is using his massive screwup and the pain he caused his former wife, children and church to launch his comeback tour. Only in the messed up world of post evangelicalism could such abuse of the office of the clergy be considered an asset on the speaking circuit.

We believe that Tullian Tchividjian is guilty of clergy abuse and should not be allowed near a pulpit or be promoted by Christian organizations.

Sadly, both he, along with KCBI, trade on the good name of Billy Graham who never misused his position to  have multiple affairs. Frankly, when I saw that tweet, I shook my head and suggested that KCBI not promote Tullian’s quick comeback.

I had to smile at this naive response and wondered if it was some kid answering for KCBI. God’s grace somehow brings only beauty for the offender? There appears to be no need for extended repentance. No need to give up  on preaching. No need to hang one’s head in shame. Now, this man who abused his position can get on with business and tell others how to cope with pain and sorrow caused by men like himself.

And that is the problem. This man abused the office of the pastor and he should not be promoted and I said as much to KCBI. 1 Timothy 3:1-7 NIV Bible Gateway:

Here is a trustworthy saying: Whoever aspires to be an overseer desires a noble task. 2 Now the overseer is to be above reproach, faithful to his wife, temperate,self-controlled,respectable, hospitable, able to teach, 3 not given to drunkenness ,not violent but gentle, not quarrelsome, not a lover of money. 4 He must manage his own family well and see that his children obey him, and he must do so in a manner worthy of full[a] respect. 5 (If anyone does not know how to manage his own family, how can he take care of God’s church?) 6 He must not be a recent convert, or he may become conceited and fall under the same judgment as the devil. 7 He must also have a good reputation with outsiders, so that he will not fall into disgrace and into the devil’s trap.

KCBI said there is nothing that disqualifies anyone from ministry and this borders on dangerous. 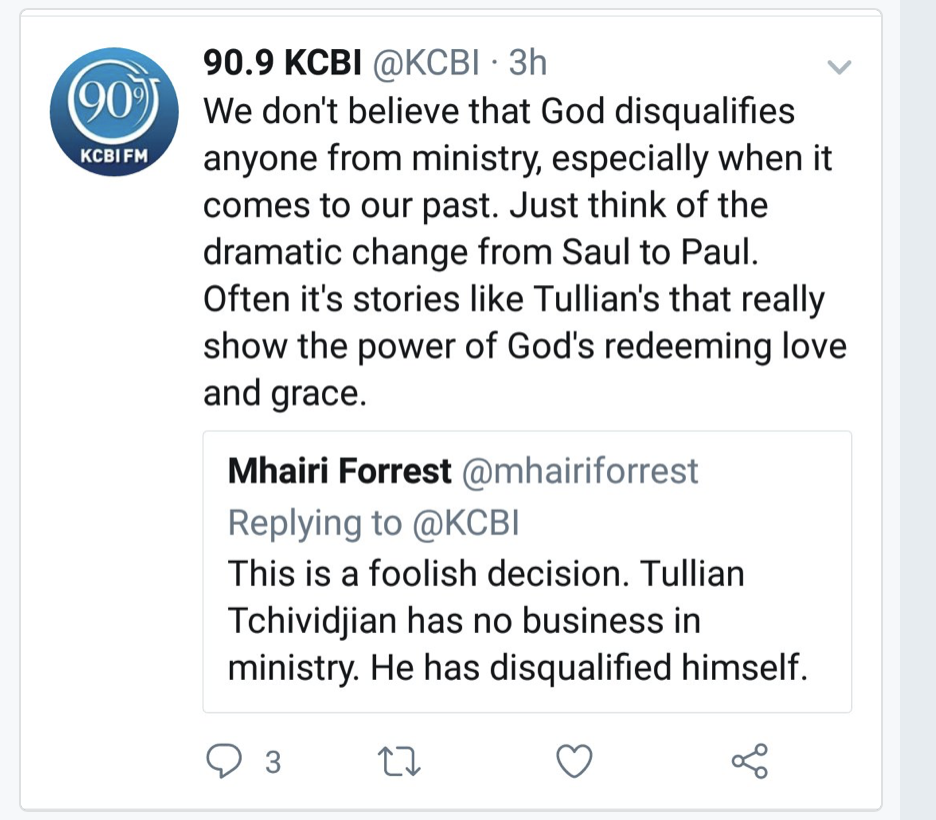 It is time for evangelicals to wake up and understand abuse in all of its ugly forms. KCBI also needs a better spokesperson.

Oh, guess what KCBI did to Julie Anne Smith and me for bringing up our concerns? 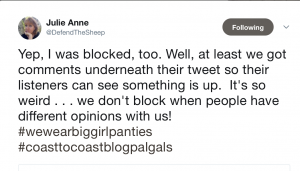